It turns out Apple's customers just wanted a plain old iPad for not a lot of cash.

It's been about a year and a half since Apple introduced the 9.7-inch iPad Pro. It was a great device, but it also made Apple's tablet lineup more confusing than ever. I wrote at the time that Apple seemed to be just throwing ideas out there, trying to see what would make customers get back in the store and buy more iPads. I also noted that it wasn't even clear what the "best" iPad was anymore. It's taken a while, but Apple has streamlined its lineup, making clear separations among products in terms of both price and feature set. As a result, iPad sales increased year over year for the first time since the holiday quarter of 2013 (when Apple sold a whopping 26 million tablets).

But this quarter's turnaround wasn't driven by Apple's "future of personal computing" vision promised by the iPad Pro. Nor was it driven by the Pro's useful features, which will only get more compelling when iOS 11 launches this fall. No, sales increased because Apple finally made a plain iPad that isn't terribly ambitious -- just affordable.

The basic iPad that Apple introduced in March was a bit of an anomaly for the company. It doesn't usher in a fresh design or any impressive features. In fact, it is, in some ways, a step backward from the iPad Air 2 it replaced: It's a little thicker and heavier, unusual for a new Apple product. More importantly, the display isn't laminated to the glass and doesn't include antireflective coating. But Apple bet that these changes would more than make up for the new iPad's $329 price, and this recent sales turnaround shows it was right.

At this point, most of us know what an iPad is and what an iPad can do. For most people, it's a portable and long-lasting device for watching movies, browsing the web, reading and playing games. The massive App Store means the iPad is a good way to indulge in creative pursuits, like editing photos and videos or doing some design work. This new iPad delivers that experience in spades. While it's a strangely unassuming device, it nonetheless represents a huge upgrade for anyone using the original iPad Air (introduced in late 2013) or something even older.

The timing of the iPad's launch was also fortuitous. As Apple has learned, iPads have a significantly longer upgrade cycle than phones, which helps explain the recent sales decline. Plenty of iPad owners have gotten three or four useful years out of an iPad, if not more. But as those pre-2014 iPads are starting to get long in the tooth, Apple has released this new model that essentially took the Air's body and put in far more powerful guts. And to spur upgrades, Apple made it significantly cheaper than the usual $500 entry price for new iPads.

While the new iPad's low price was likely the biggest driver in this quarter's sales bump, it's also worth pointing out how the new iPad Pro models help make the entire lineup a lot more logical. Back when the 9.7-inch iPad Pro was released, it was hard to say whether buyers should spend $600 for that device or $500 for the iPad Air 2 that had double the storage space.

But now Apple has differentiated the two iPad lines in both price and features, and that makes the choice of which to buy much easier. If you want the basic iPad experience, the new iPad is the one to buy. And the recent improvements to the iPad Pro lineup make it a lot easier to see what you're getting for the extra cash. Most important is the display: It's laminated to the glass, has antireflective coating and features both the TrueTone color adjustment technology as well as the wonderful 120Hz refresh rate. That's to say nothing of the better speakers, more powerful chipset and Smart Keyboard and Apple Pencil support. Add that all up and the case for the iPad Pro is clear, even if most people will still opt for the more inexpensive model.

Just because Apple cleaned up its iPad lineup and increased sales for the first time in years doesn't mean sales will continue to grow. While the 11.5 million iPads the company sold in its fiscal Q3 is impressive, it's far less than it sold in the same quarters back in 2014 and earlier. We'll have to wait three more months to see if the new iPad Pro models that came out at the tail end of the quarter will drive sales like the cheaper iPad did. It'll certainly take more than one good quarter to say whether the iPad has regained its momentum. And while Apple sold more iPads than it did a year ago, revenue for the product category only grew 2 percent -- that's what happens when you tempt people with a significant price cut.

If you look at the iPad's sales trend over the years, it seems more that the market is stabilizing; it's unlikely that sales will return to 2013 levels, at least not in the immediate future. But all of Tim Cook's comments on the iPad through its downturn made it clear that the company is in it for the long haul with its tablets and won't let a few years of slumping sales deter the company from that vision. 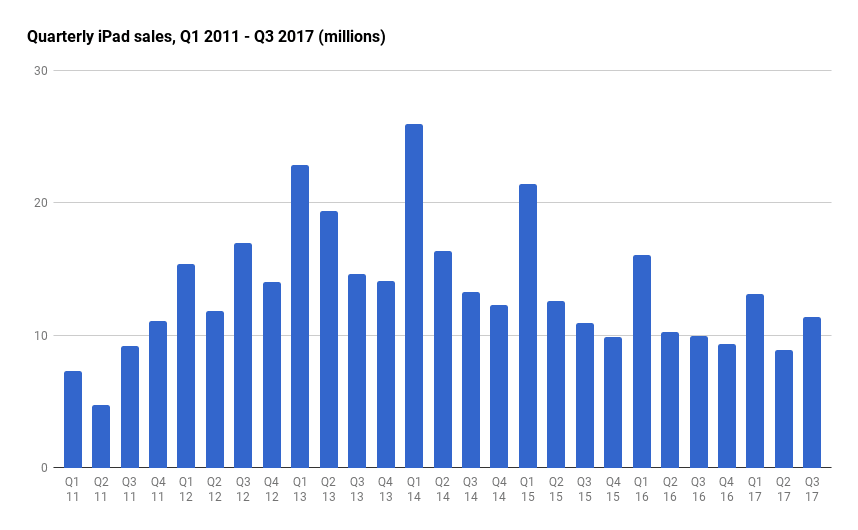 It's also a product mostly without peers: After all, most companies have given up trying to compete with the iPad. That's partially because the tablet market appears smaller than it first seemed, but it's also a testament to the quality of Apple's experience. Making the entry-level iPad so cheap is almost unfair to the competition; Samsung may make premium tablets, but the dearth of tablet apps has always limited Android slates. Now that the iPad is more affordable than ever, there are few reasons to look at other tablets. It may not be a company-defining product like the iPhone, which accounted for 55 percent of Apple's revenue last quarter. But the combination of a balanced product lineup and a tempting starting price means that the iPad will likely continue to define the category for the foreseeable future.

All products recommended by Engadget are selected by our editorial team, independent of our parent company. Some of our stories include affiliate links. If you buy something through one of these links, we may earn an affiliate commission. All prices are correct at the time of publishing.
All Apple had to do to sell iPads was make them cheaper
apple
appleearnings
gear
ipad
ipadpro
ipadsales
personal computing
personalcomputing