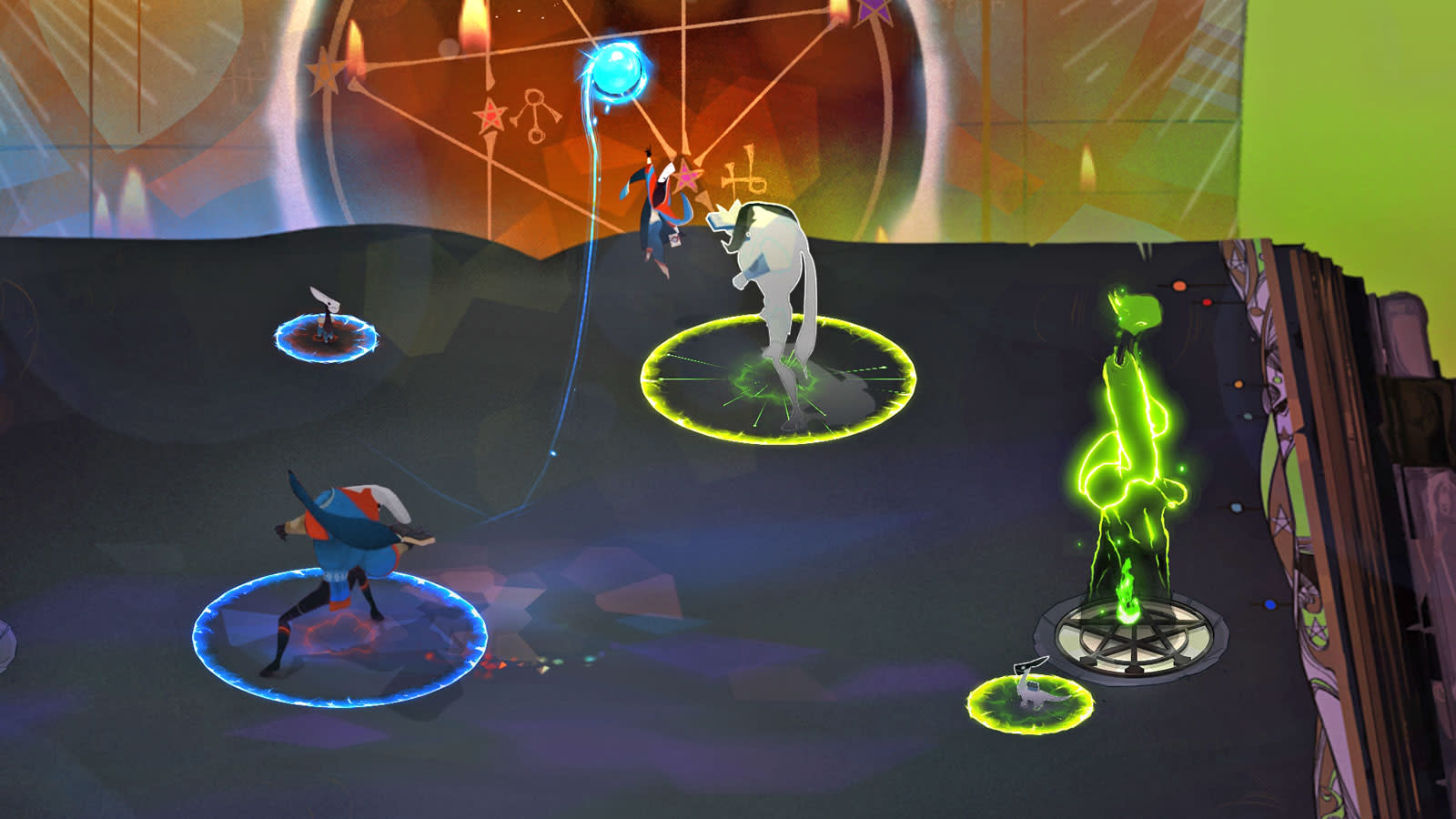 Pyre is the latest title from Supergiant Games, the indie studio that earned instant acclaim for its debut Bastion and follow-up Transistor. Like its predecessors, Pyre features lush hand-drawn art and a vibrant soundtrack, along with a pulpy fantasy-esque plot. But unlike the sword-and-gunplay of Supergiant's earlier hits, Pyre does something few fantasy games dare: It makes you play sports. Which means it could be the game that slips past players' defenses and opens these siloed genres up to each other.

The player's character, banished from the civilized world for the heinous crime of literacy, falls in with a diverse group of exiles. All have their own set of skills and progression tree; over time, you learn why each was driven from the Commonwealth to eke out life in the purgatorial wasteland of the Downside. Everyone who wants to escape, including your ragtag band, can only do so by completing Rites -- competitive matches in sacred courts where teams toss crystal balls into opponents' pyres.

A Rite is pretty much three-on-three basketball with fantasy trappings. Instead of violent combat where it's your life or your enemy's, players hit the arena to pass, shoot and score. This is the best of all possible worlds, where sports and fantasy trickle into each other and stop being mutually exclusive.

It's the kind of blurring that happened when fantasy sports fans started realizing their stat-chomping hobby looked a lot like Dungeons and Dragons. Pyre runs this the other way: Take away the fantastical locales, strange races and quest-based plot, and it's basically a sports league. It even has all the ridiculous personalities you'd expect from professional sports: the pierced and mohawked dog with heavy-metal intro music, the hulking horned demon lady with a perpetual deep vibrato, the death-god-worshipping bog crone.

But the game doesn't have the feel of a major-league race to the championship. It's a desperate slew of teams filled with the world's cast-offs trying to escape limbo. It has more in common with the minor leagues: Your team trundles forward to their next match on a ramshackle carriage, encountering mishaps in the barren lands along the way. Heck, you could even argue the game apes the lives of amateur musicians -- perhaps those touring the boonies hoping for a chance to impress studio scouts and escape their provincial lives for the "promised land" of the big city. Yet, Pyre's gameplay is unquestionably sporty: Lethal violence is rare, and those living in the Downside mostly settle their differences within the ball-in-goal Rites.

Of course, there have been nontraditional sports gameplay in video games before, from parody-genre crossovers like Blood Bowl to special-team multiplayer modes like Grifball in Halo 3. While Rocket League is just soccer with cars, the nitro-powered stunt physics turn it into a unique experience. But even these alt-sports games stick to a lightweight structure, at most mimicking real-life leagues as players climb the rankings toward a climactic championship game.

Pyre does something different: It swaps out the combat typical of the fantasy-RPG genre for straight-up sports play. Not as a minigame, like with Final Fantasy X's Blitzball, but as the main attraction. That's bold. It's faith that players don't need to cut down hordes of orcs with swords and magic -- Pyre believes fans will get just as much enjoyment from beating enemies in grim athletics. Its vibrant characters, gorgeous art and rich world are enough to give each Rite match enough weight to matter.

If Pyre does have something to teach sports, it's how to deliver context to the laymen. Important people, places and concepts get highlighted in dialogue text, and players can hover over them to see a one-sentence summary and usually a line of lore. It's a great way to fluidly wrap in minimally-annoying vocabulary reminders. Sports games could use this kind of gentle terminology footnoting too -- not just for rules, but to inject some flavor by explaining a game's rich history or describing venerable rivalries.

I've never been drawn to sports games, and a lot of my fellow fantasy geeks similarly balk at a genre filled with rosters of millionaire jocks. Pyre is the rare game that believes athletic competition can be just as meaningful and consequential as violence. Like that friend who tells you a strange-smelling dinner meat is "totally chicken -- just try it," Supergiant knew fantasy fans just needed a kick in the rump and some familiar trappings to ease them into it.

Not that I'm suddenly going to go and pick up FIFA tomorrow. If I'm gonna play a sports game, I better get to fill my squad with chatty dogs, beefy horned demon ladies and sassy harpies.

In this article: av, gaming, pyre, sports, supergiantgames
All products recommended by Engadget are selected by our editorial team, independent of our parent company. Some of our stories include affiliate links. If you buy something through one of these links, we may earn an affiliate commission.