The video has been taken down, but the screengrabs remain.

Last month, LG teased a reveal for its V30 smartphone, a followup to its audiophile-friendly V20. While renders immediately appeared supposedly showing the upcoming phone's design, we might have just gotten a real leak. A user on Joseph Gordon-Levitt's creative repository HitRecord posted a few photos prominently featuring a phone with the V30 logo displayed on its back side. Intentional leak or not, the source video has been wiped from the internet -- except for the screengrabs Gizmodo took.

User RandyAzarga's library of uploaded content is empty now, but it reportedly had a video featuring the phone, as did a now-absent video from user Mcgannfamily. The phone in question looks a lot like a marriage of the V20 and LG's G6 phone, especially the latter's glossy back (RIP to the V20's removable backplate and battery). While there wasn't much doubt that LG was referring to the upcoming V30 when it teased a next-gen large OLED phone, the leaked photos support that theory. 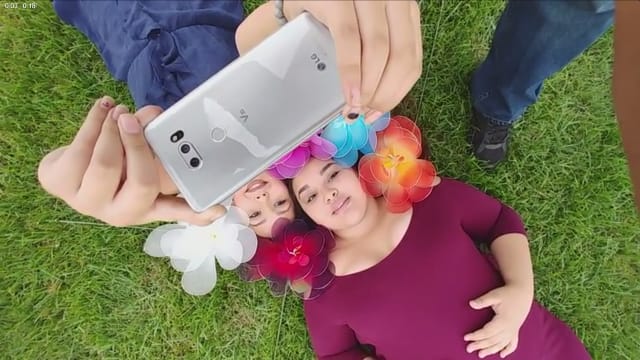 But if this is the V30, then it's missing a notable feature from its V20 predecessor: A secondary thin screen atop the main display. We didn't find much use for the touch-sensitive strip when we reviewed LG's late-2016 flagship phone, so it wouldn't be a great loss.

For the record, HitRecord and LG partnered up in August 2016 before the V20's release with plans to showcase photos shot with the then-new smartphone. This followed HitRecord's first pair-up with the phone company the year before: Fans (and Gordon-Levitt himself) put together a short film shot entirely on LG V10 smartphones.