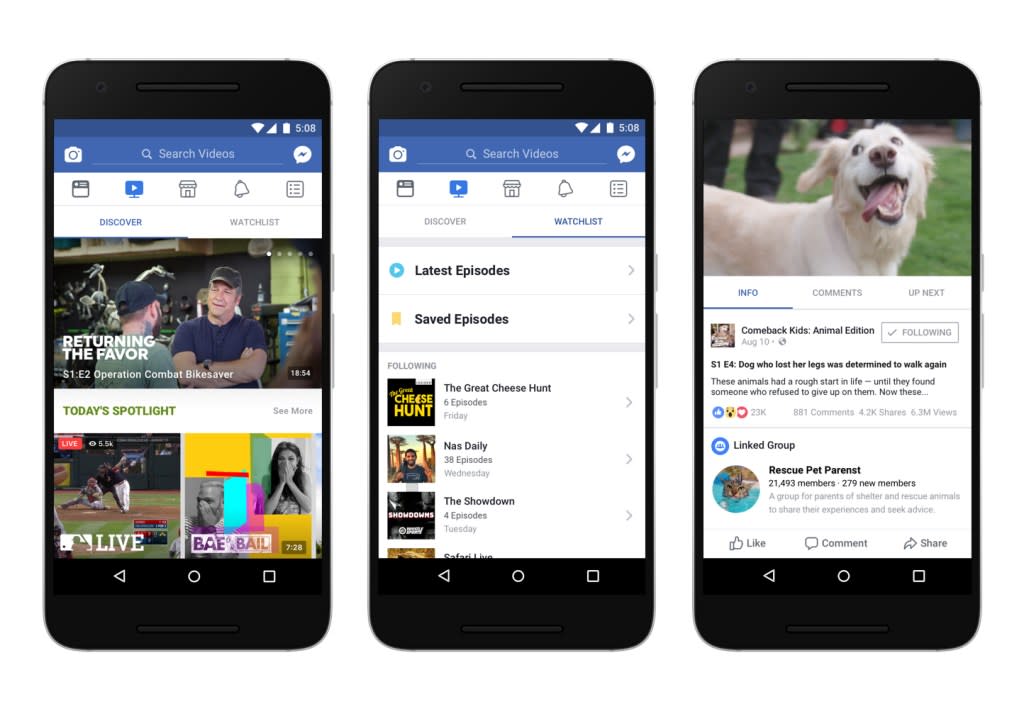 Get ready for a new tab in Facebook on the web, mobile and TV apps, as the social network has announced it's replacing the video button with "Watch." Watch is "a new platform for shows on Facebook," and why that doesn't yet explain why we'd want one, but given Silicon Valley's obsession with the format, it's not hard to imagine why this is what we're getting. At first, Watch will be available to a "limited subset" of US users, before rolling out to more people here over the next few weeks.

Judging by the layout and features, Watch is intended as an alternative to YouTube for video creators of various sizes. It gives creators a way to lay out their entries/episodes in a more logical format than the usual profile feed and, of course, make money from their videos from TV-style Ad Breaks as Facebook exposes them to slices of its billion+ daily active users. Naturally, there are social discovery features that group videos your friends are watching, as well as sections based on videos that drive tons of comments, or particular forms of reactions.

Mike Rowe (Dirty Jobs) has one of the first original shows on the platform with Returning the Favor, and while there's no mention of Lavar Ball, other items of interest include MLB's live-streaming game of the week, and Nas Daily, a show where the (update: not the rapper) will make videos with his fans.

In this article: entertainment, facebook, FacebookWatch, internet, TV, tvshows, video, Watch
All products recommended by Engadget are selected by our editorial team, independent of our parent company. Some of our stories include affiliate links. If you buy something through one of these links, we may earn an affiliate commission.