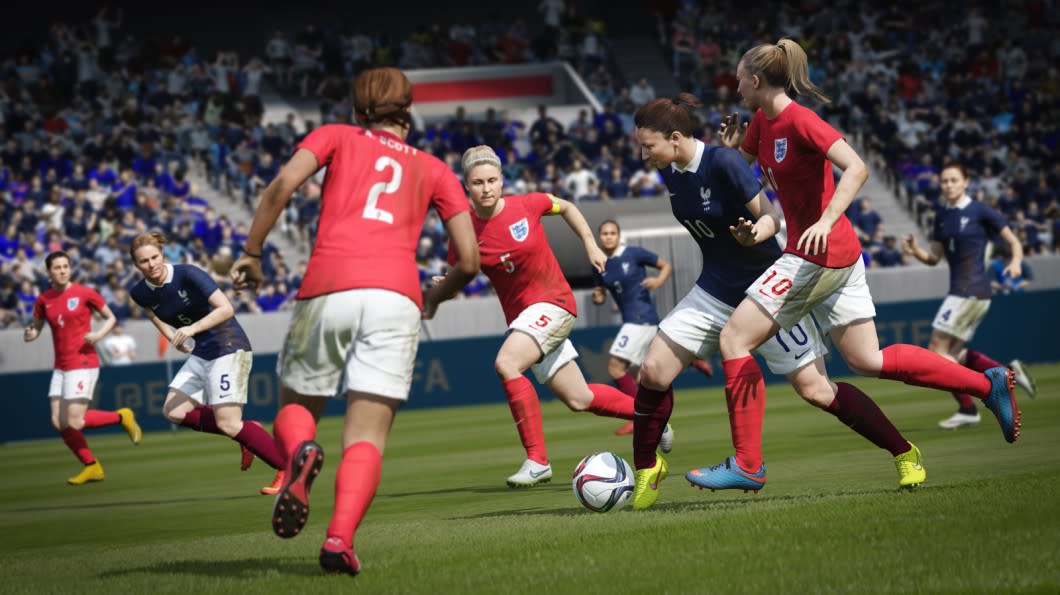 Behind EA’s push to put more women in sports games

“We want to build and promote a world that is diverse and inclusive.”

Until two years ago, there was no way to play female characters in FIFA, the world's most popular gaming franchise. But EA Sports changed that with the introduction of FIFA 16. That's because, for the first time ever, the studio revealed its flagship game would feature women soccer players. It was a great move toward diversifying the game's plot, albeit a risky one considering its core demographic: young men. That doesn't mean FIFA players aren't open-minded. But in an industry with a reputation for being misogynistic, EA Sports made itself vulnerable to potential backlash. It turns out the company needn't have worried: FIFA 16 quickly became one of the best-selling titles of the year.

EA Sports' push to put more women in its sports games didn't begin with FIFA 16. Back in 2011, the company announced that its then-upcoming hockey game NHL 12 was getting its first female playable character. This decision came after 14-year-old Lexi Peters penned a letter to EA asking why there weren't any girls in NHL, and why her brother could make a character that looked like him but she couldn't. "It is unfair to women and girl hockey players around the world, many of them who play and enjoy your game," Peters wrote. "I have created a character of myself, except I have to be represented by a male and that's not fun."

As IGN reported at the time, that letter eventually made its way to David Littman, NHL 12's lead producer, who was so touched by it that he immediately tried to figure out a way to make Peters' wishes come true. "Lexi's letter was a wake-up call," he said in 2011. "Here's a growing audience playing our NHL game and we hadn't done anything to capture them." In the end, Peters got more than she hoped for: Her face became the default for anyone who wanted to create a female character in NHL 12. Turn on browser notifications to receive breaking news alerts from Engadget
You can disable notifications at any time in your settings menu.
Not now
NBA Live 18.

Fast forward to today and EA Sports has taken these inclusion efforts to a new level. In addition to the past two editions of FIFA, as well as the soon-to-be-released FIFA 18, the developer's next move is to bring WNBA teams to its basketball franchise. Starting with NBA Live 18, which launches on PlayStation 4 and Xbox One in September, official WNBA rosters will be represented in the game. That means you'll be able to play with athletes like Allisha Gray, Brittney Griner, Maya Moore and the 2017 WNBA Draft's first pick, Kelsey Plum.

And let's not forget about EA Sports' UFC 2, which came out in 2016 and features none other than renowned mixed martial arts fighter Ronda Rousey on the cover alongside Conor McGregor. All told, you'll find 45 women characters in the MMA game, compared to more than 200 men. While that's still a large disparity, the company is at least moving in the right direction. In 2014's UFC, for example, the franchise's first title to feature female playable characters, there were only eight, including Holly Holm, Miesha Tate, Cat Zingano and, of course, Rousey.

In FIFA, meanwhile, there are 15 women's national teams, each of which includes roughly 23 players. Naturally, that includes the US squad, led by players such as Alex Morgan, who shared the North American cover of FIFA 16 with arguably the world's best soccer player, FC Barcelona's Lionel Messi. All in all, EA now has pro female athletes in most of its sports franchises, including FIFA, NBA Live, NHL, and UFC. The only one missing is Madden, which is complicated considering there aren't many professional American football leagues for women across the world. Still, EA could let you create your own female player, as it did with NHL 12.

EA is alone in its efforts to put more women in sports games. The company's direct competitor 2K Sports isn't doing anything to move the needle. Its most popular game, NBA2K, doesn't feature any playable female characters -- and it doesn't look like it will anytime soon. 2K Sports declined to comment for this story. Meanwhile, Cam Weber, senior vice president and group general manager at EA Sports, tells Engadget that the company had to find ways to make its games more appealing to wider audiences. Most importantly, he said, EA needed to recognize the phenomenal athletes who compete in soccer, basketball, MMA and other sports. "We want to inspire sports fans of all shapes and sizes, backgrounds and genders from all over," he said. "It's important that we can make a positive impact on the world in the games that we do."

"If you want to make games that appeal to women, you need more women on your development teams as well."

Weber said that while he doesn't have a daughter, many members of his team do and they use that as motivation to develop increasingly diverse games. "We believe we're at our best when we give opportunities to anybody," he said, "no matter where they're from, no matter their gender." He adds that in order for women to be represented accurately, fairly and respectfully in games, the change must come from behind the scenes first. "If you want to make games that appeal to women, you need more women on your development teams as well." He said this is an area where EA has made "great progress" over the past few years, claiming that the company spends "a lot" of time, energy and resources on ensuring that more female devs work within EA Sports. (EA didn't share any internal stats that would corroborate his statement.)

Aside from making progress with its sports games, EA is carving a similar path in other genres as well. Last year, the company launched Mirror's Edge, an action-adventure platformer with a female lead. Meanwhile Star Wars Battlefront II, which is scheduled to arrive in November, will feature a campaign mode starring a strong female character of its own. And with the upcoming FIFA 18, Weber said there's going to be "really prominent" female in "The Journey," the game's popular story mode. 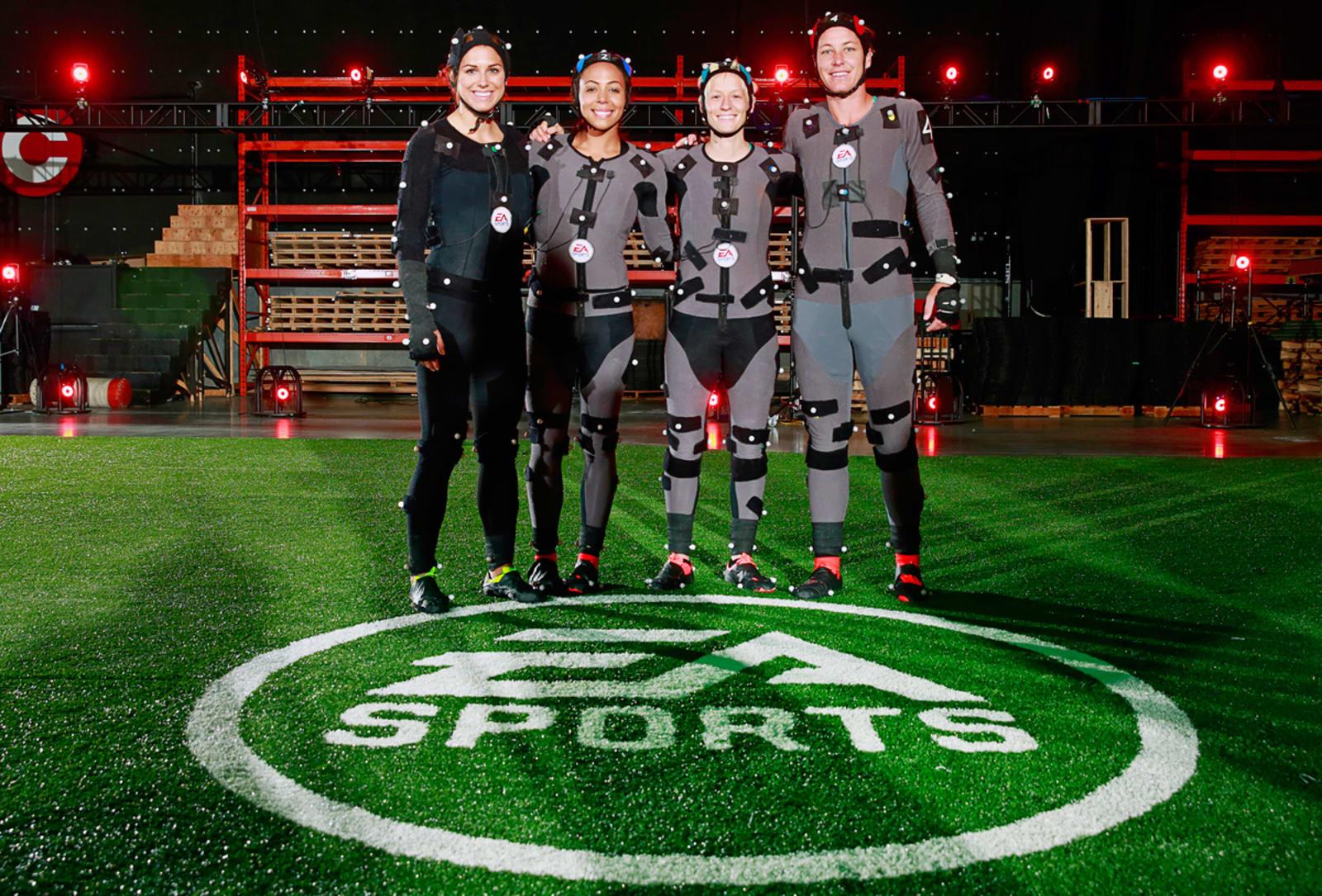 "The industry is starting to realize that there is a strong fanbase interested in human stories outside of the conventional gruff, brooding white dude."

Anita Sarkeesian, executive director of FeministFrequency.com, said that what tends to perpetuate the invisibility of women protagonists in games is having an old mentality. It's the "games with female protagonists don't sell" or "the all-male writing staff doesn't know how to write for women," she said. Still, Sarkeesian said she's been "cautiously optimistic in the past year or so," as developers such as EA are clearly making progressive efforts. "The industry is starting to realize that there is a strong fanbase interested in human stories outside of the conventional gruff, brooding white dude." According to the Entertainment Software Association's 2017 report on the gaming industry, 37 percent of the "most frequent" video game buyers were female.

"We, the girl gamers, have been living under the male shadow."

Jennifer Franco, 28, plays EA Sports games regularly. She said she got into FIFA in 2003, and that she's been waiting for women to be featured in the game basically all her life. "We, the girl gamers, have been living under the male shadow," she said. "Most games are meant for boys, not girls, and that is changing for good. FIFA 16 was a huge breakthrough, but there's always room for improvement." That improvement, she said, could come in the form of playing with professional female clubs in FIFA, which currently isn't possible. When asked if this is something that could happen in future, EA's Weber said the company had nothing to announce right now.

Weber did say that this shift is major part of EA's long-term business strategy, claiming that the company will continue investing in women, both in games and in its hiring practices. "You'll see continued expansion on features, characters and themes that represent a broader audience," he said. "But in the coming years, without getting too detailed about it, you'll see a bit of a shift in our approach to how we market and even talk about our brand in EA sports." Only time will tell if others will follow suit.