The Blade ZMax gives you iPhone-like bokeh at a fraction of the price.

While the rest of the tech world gets ready for the return of Samsung's Galaxy Note line, ZTE continues its quiet takeover of the budget phablet market. Every year since 2014, the company has released a low-cost handset with a large screen, generous battery and surprisingly modern features (think: fingerprint sensors and USB-C ports). This time is no different. The 6-inch Blade ZMax is now available for pre-order via MetroPCS, and will be in stores on August 28th, starting at $129.

Gallery: Hands on with the ZTE Blade ZMax | 10 Photos

What stands out about this year's model is that it has dual cameras -- an unusual feature at this price. A slew of $200 phones unveiled at CES all featured the same iPhone 7 Plus–like setup, but the Blade ZMax is the first to offer it for less than $150. With the pair of sensors on the back, you can take pictures with artificially blurred backgrounds to highlight your subject. The Blade ZMax's 16-megapixel RGB sensor captures color information, while its 2-megapixel monochrome counterpart takes care of details. During my brief time with the new handset, this system worked, blurring out chairs and desks in the background while keeping the man in the foreground crisp.

The Blade ZMax's images fall short of those taken with iPhone 7 Plus, though. Apple's software delivers cleaner, sharper pictures with better-defined edges between the subject and the background. Upon closer inspection, I also noticed a halo effect around the subject in shots taken with the Blade ZMax. It could be because I was using a defective unit, although ZTE hasn't responded to my question as to whether this was the case. Still, the artifact was minor enough to overlook, and I'm not going to nitpick about a device that costs less than a night out with friends. 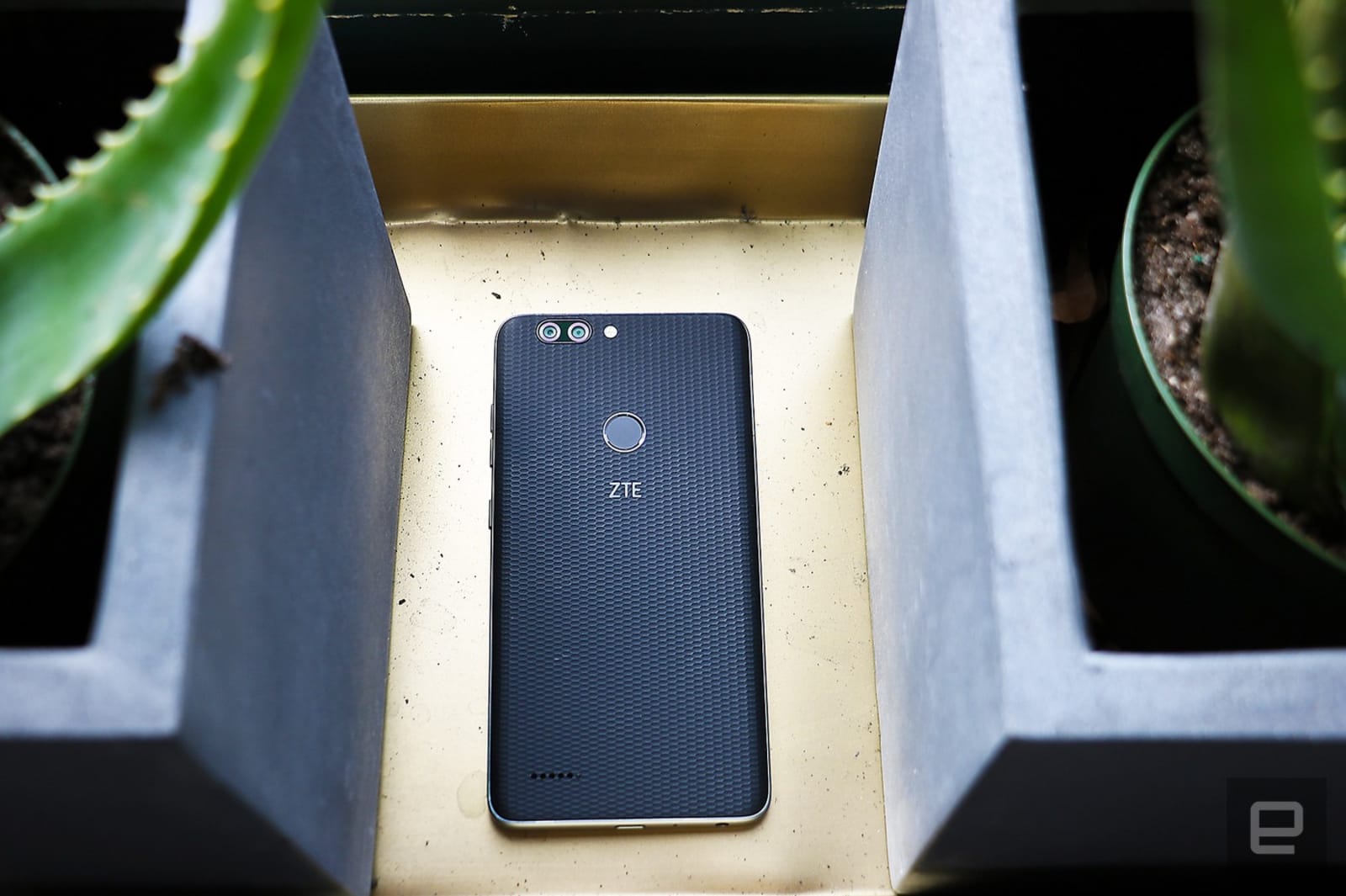 There's really not much else to say about the Blade ZMax. Its rear is covered with a grippier dotted texture than its predecessor's matte cover, while its battery is now 4,080mAh, up from 3,400mAh on last year's model. Impressively, the phone is ever so slightly (0.03 inch) slimmer than its predecessor, despite that larger cell inside. But I still prefer the older handset's aesthetic, which featured a blue rear with rose gold accents. The new rubbery cover feels comfortable, but it looks dull.

ZTE also opted for Japanese company Asahi's Dragontail glass on its display instead of Corning's Gorilla Glass. We'd seen this material on the Neo Reloaded as well, but Dragontail hasn't shown up in other phones yet. From my time with the Blade ZMax, the different glass had no noticeable impact on the screen's quality; colors and text on the 6-inch full HD display looked about as rich and sharp as on competing devices I've tested.

Although it has a more rugged aesthetic than its predecessor, the Blade ZMax is a well-rounded device for the price. In fact, it's the only 6-inch phone around with relatively modern features for less than $150. There are some compromises you'll have to tolerate in exchange for the savings, but people looking for a new handset with a large screen will find the Blade ZMax a promising option.

All products recommended by Engadget are selected by our editorial team, independent of our parent company. Some of our stories include affiliate links. If you buy something through one of these links, we may earn an affiliate commission. All prices are correct at the time of publishing.
View All Comments
ZTE’s latest big-screen phone packs dual cameras for $129