Except it runs stock Android.

Andy Rubin rose to fame for his role in creating Android, and even after leaving Google, he couldn't quit phones completely. Now he's back with his new company, Essential, to show the world's best phone makers how it's done. I've spent a few days playing with Essential's first device, the PH-1, but that wasn't enough time to fully understand the extent of the startup's impressive work. For now, let's take a closer look at what Essential has delivered, and how it performed over the first few days.

The first thing anyone will notice about the PH-1 is its 5.7-inch screen, or, more accurately, how it stretches almost completely over the phone's face. Other phones, like Xiaomi's Mi Mix "concept," might technically have smaller bezels, but I doubt most people would care; there's something sumptuous and even a little thrilling about a phone that's basically all screen. It sometimes looks as if someone cut an actual photo down to these weirdo dimensions and plopped it onto a titanium slab where the screen would go. Still, it's not perfect: There are brighter displays out there, and colors look slightly washed out compared with AMOLED panels.

The notch cut out of the top for the 8-megapixel camera is a little peculiar too. The important thing to note is that it never really gets in the way, thanks to how Android fills up the notification bar from the sides in. Not every app takes full advantage of this unique screen, though. The phone dialer and Chrome, not to mention popular services like Twitter and Spotify, look like typical, boxy apps that don't spill across to the phone's top edge. It's definitely a bummer to get the full-screen effect only sometimes, and it's not clear what kind of work, if any, developers will have to do to ensure compatibility. Given how young Essential is (just 18 months old), I wonder how many app developers would even take the time. 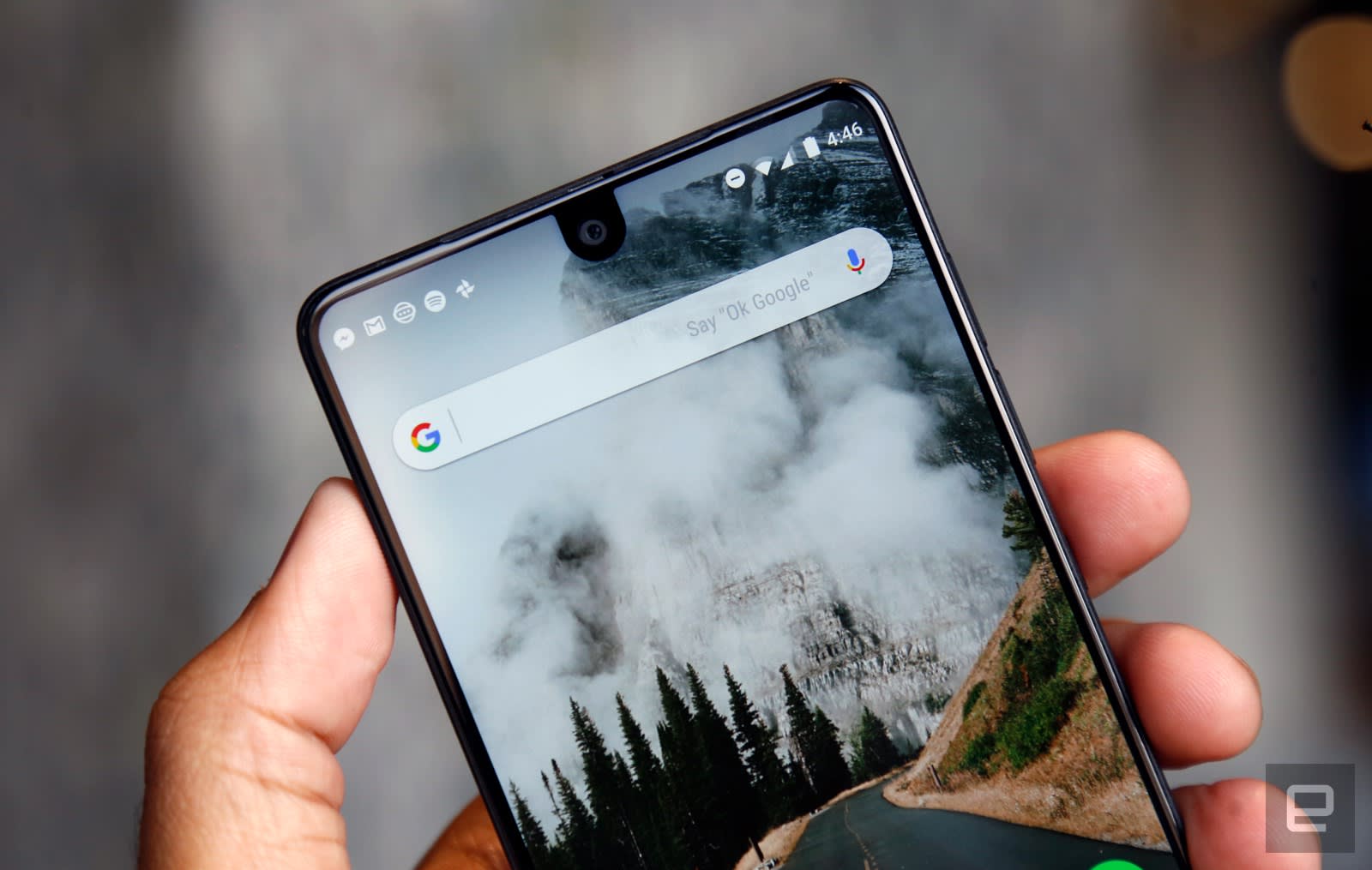 Beyond the screen, the PH-1 is a dense slab of a smartphone. And I mean it when I say "slab" -- not only is it reassuringly weighty, but it lies totally flat on a table no matter which side is facing up. This was a very deliberate design choice, and after years of using phones that curve at least somewhat to fit my hand, it took a little getting used to. The company also assured me that the phone's boxy ceramic-and-titanium build can take a lot of punishment, and it feels almost impeccably sturdy, but who could blame me for being concerned? Xiaomi's Mi Mix was also made of ceramic, but that didn't mean its screen was impervious to damage.

Oh, I should also point out that the glossy black model I received picked up fingerprints faster than almost any other phone I've tested recently. If I didn't know better, I'd think the PH-1 was sucking my greasy fingerprints off from across the room. 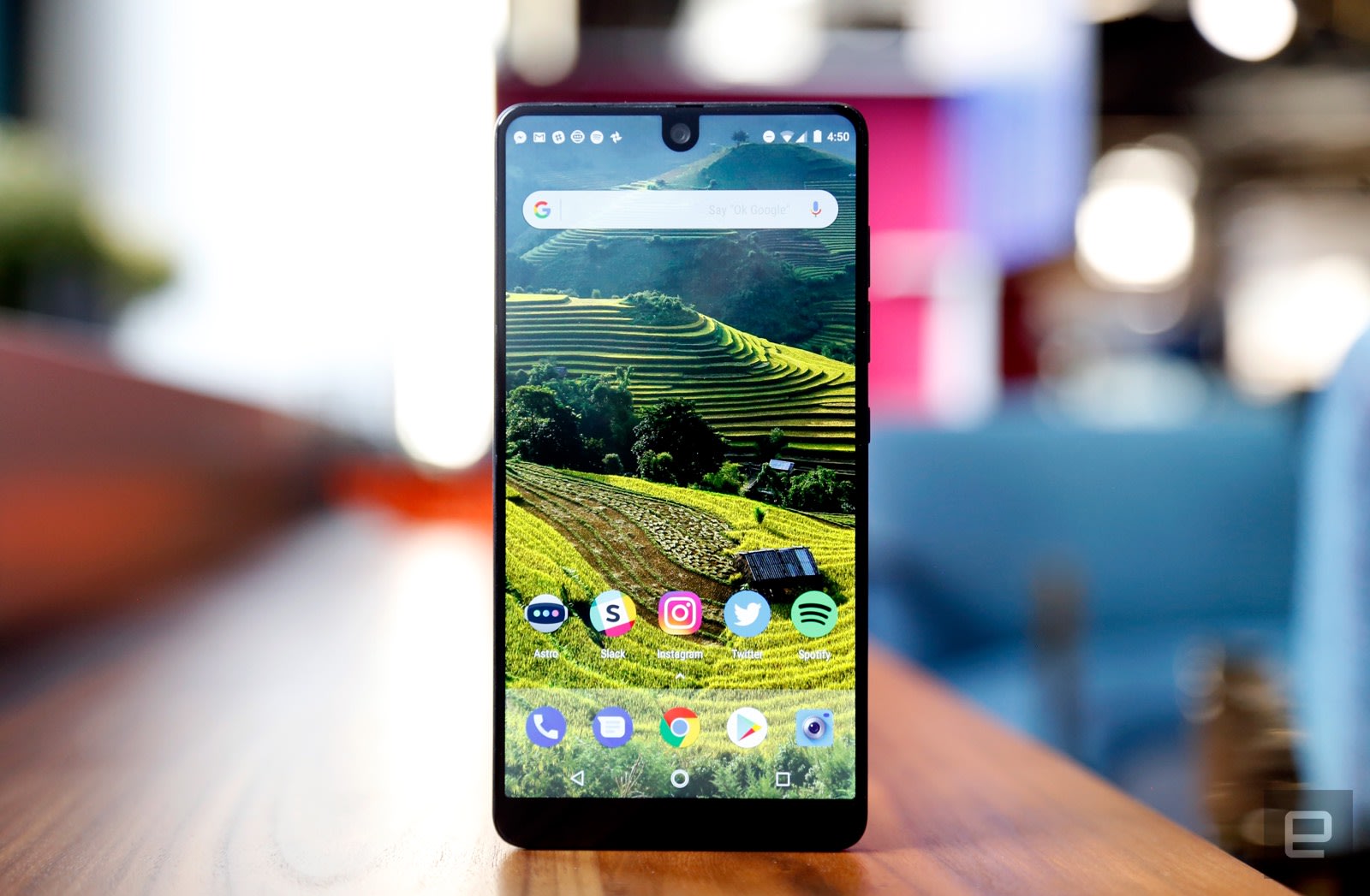 While we're talking about the phone's back, you'll notice two tiny pins on the top right. Think of it as Essential's answer to Motorola's Moto Mod connector ... just much smaller. That's a good thing too: The placement of the Moto Mod connector on the bottom of the Moto Z series means Motorola is stuck building similar-looking phones for a while to ensure compatibility. Essential wanted to avoid designing themselves into a corner, and it seems to be working so far; any of the magnetic accessories that stick to the phone will also be able to attach to the forthcoming Essential Home assistant. Unfortunately, while the company has said it's preparing a hardware development kit for would-be accessory makers, the company reps we spoke to wouldn't speculate on what future magnetic attachments would be able to do.

Essential also jumped on the dual-camera bandwagon for its first smartphone, and this is where things start to get a little dicey. We've got one 13-megapixel color and one 13-megapixel monochrome sensor working together here, and photo quality has been mostly decent so far; by default, the phone combines color information from one sensor and detail data from the other. It's not exactly a novel trick -- Huawei's recent P-series phones do the same thing -- and there's a noticeable delay when you try switching between the color and monochrome modes. Performance is fine in good light, but my first batch of low-light shots were a little behind the curve compared with other premium smartphones. 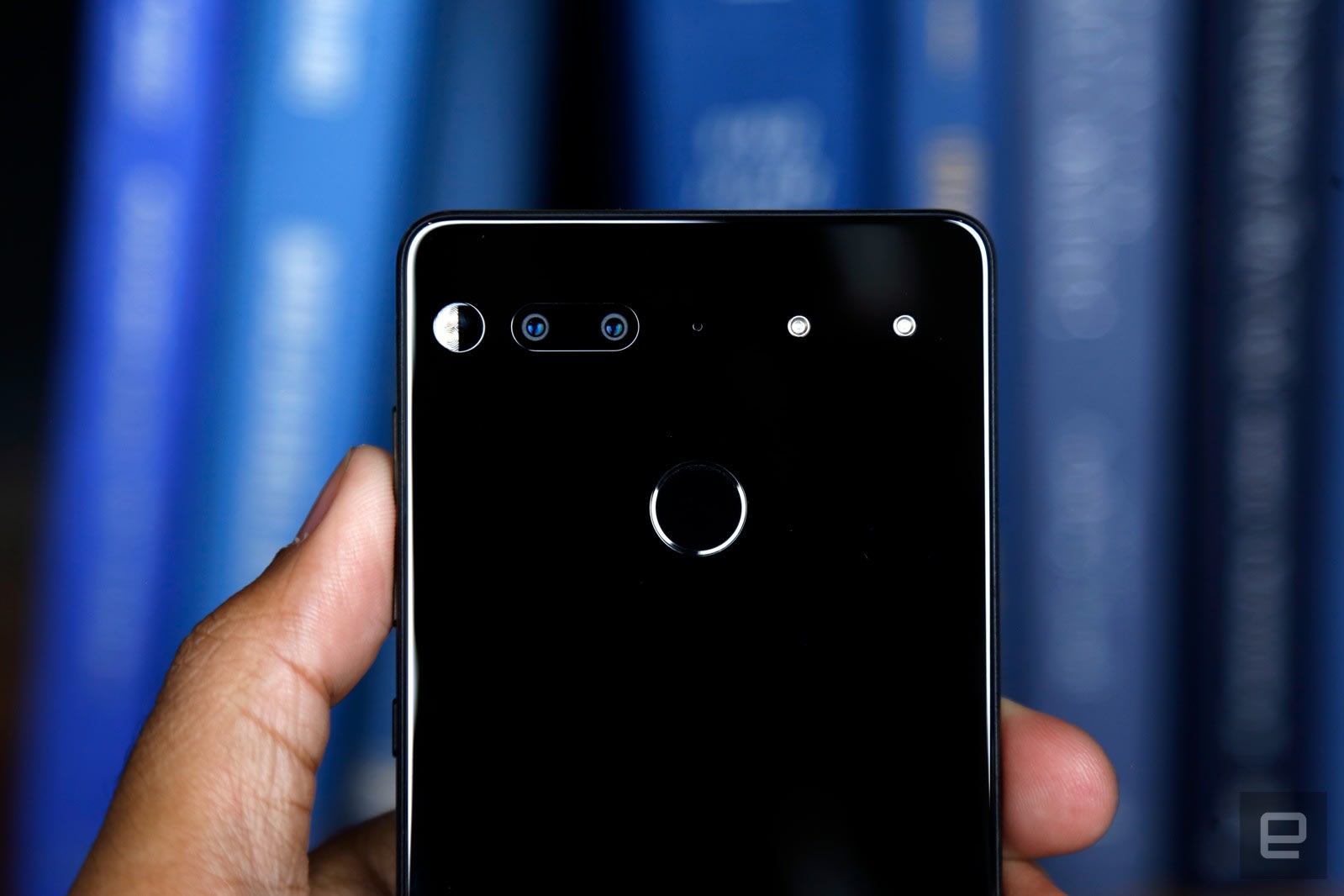 For better or worse, shooting with the Essential is dead-simple. I say that because there are a grand total of four shooting modes in the custom camera app, including Auto, monochrome and the option to shoot a slow-motion video clip. (Don't worry, you can also shoot normal video at up to 4K.) Meanwhile, a trip to the settings reveals only two options: one to toggle the shutter sound and one to store location data in a photo. I appreciate the simplicity, but a little extra control would have been nice. Coincidentally, the night before we published this story, Essential pushed out a new software update, which mostly impacts the camera, so I'll see how the shooting experience changes.

Simplicity, as it happens, was Essential's goal for the software experience too. If you were wondering what the father of Android would do with software when given the chance to build his own phone, the answer is essentially "nothing." Rubin said he was pleased to be a customer of the product he'd spent years of his life working on, so we're left with a stock build of Android 7.1.1. Aside from the stripped-down camera app, the only real difference I've noticed so far is that the notification bar is thicker than normal to fit the 8-megapixel camera that sticks into the screen. There's also a little extra space at the top of the screen in certain apps, like Spotify. I'm not really sure why. (Essential hasn't yet responded to my request for comment.) 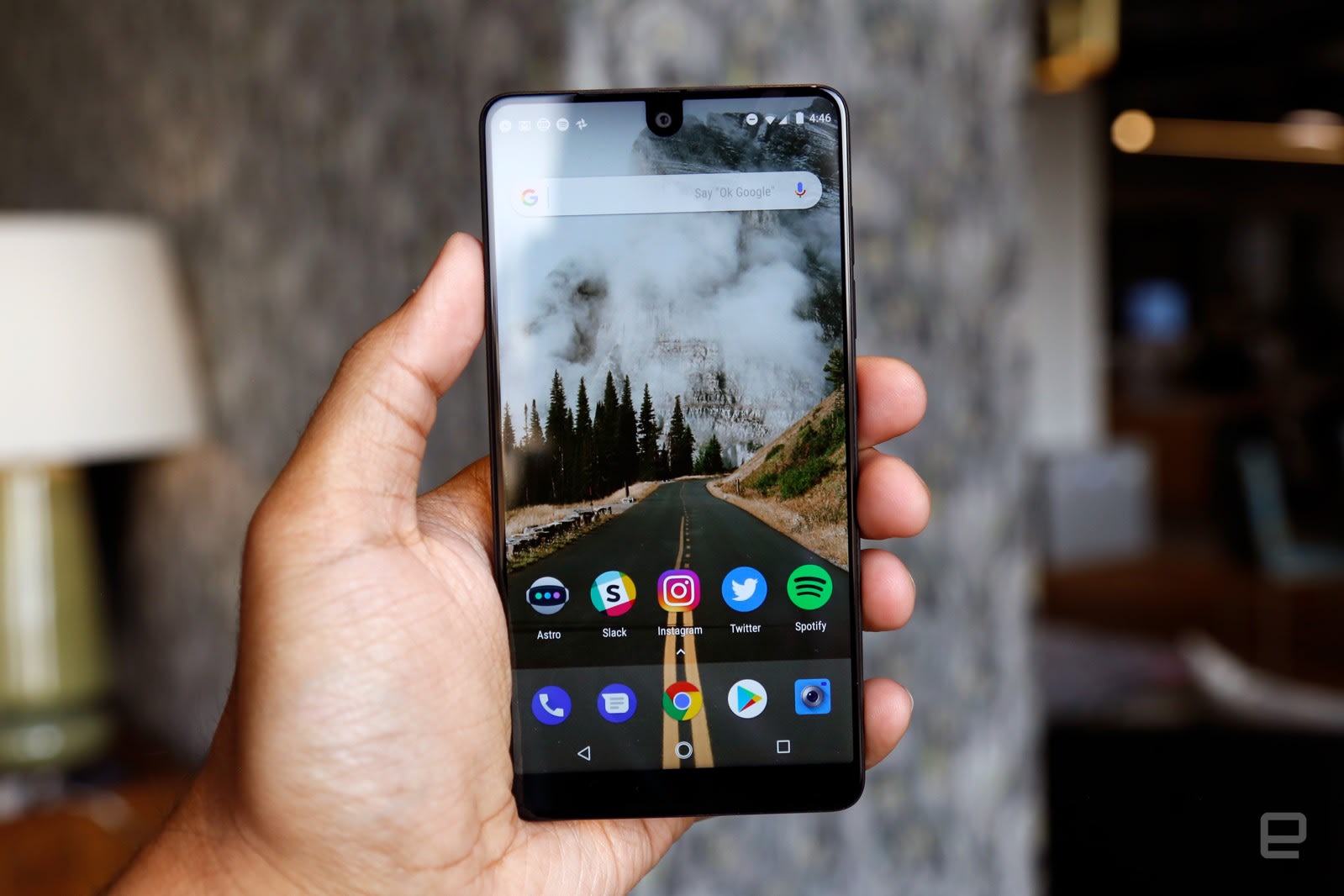 The software situation changes slightly when you activate the PH-1 with Sprint. Once you pop in the SIM and complete the process, two extra apps appear: My Sprint and Tidal. Considering how clean Rubin wanted his phone to stay and just how bad other carriers are with bloatware, I'd say the Sprint deal actually worked out pretty well. On a related note, Sprint is taking marketing the phone pretty seriously: They're building impeccably-designed stands to go in Sprint stores, though they've remained mum about the extent of their advertising push.

This is all well and good, but what about performance? Suffice to say it's fast -- really fast. What else would you expect from a smartphone packing a Qualcomm Snapdragon 835 chipset, 4GB of RAM and no bloatware to bog it down? The touchscreen's latency (also known as the delay between touching the screen and it reacting) seems a little more pronounced than on other phones, but that might just be in my head. Meanwhile, there's a 3,040mAh battery inside -- a little smaller than I was hoping for, though it makes sense considering how compact the device feels. In general, it's been able to get me through a day of work, but stick around for more conclusive results in our full review, coming next week.

All told, Essential has put together a remarkably impressive phone — no small feat for a startup, no matter who's at the helm. It's definitely not perfect, though, so I'm going to spend the next few days trying to separate the value from the hype.

All products recommended by Engadget are selected by our editorial team, independent of our parent company. Some of our stories include affiliate links. If you buy something through one of these links, we may earn an affiliate commission. All prices are correct at the time of publishing.
Essential's PH-1 strives to be more than just another Android phone
android
andyrubin
essential
gear
hands-on
mobile
nougat
ph-1
ph1
preview
smartphone
startup
TL17ESS