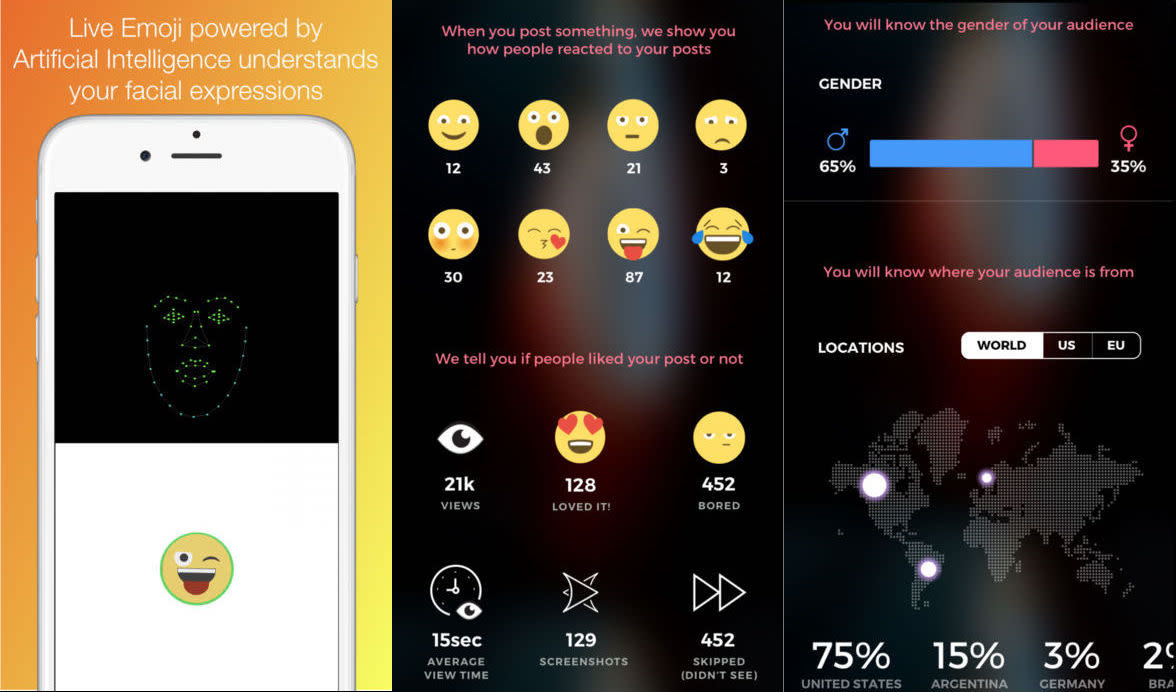 There's a new social network in town and it's packed with some pretty smart and savvy features. Polygram's main contribution to the hard-to-break-into social media world is its ability to detect facial expressions, allowing users to to respond to messages with an emoji based on their actual expression. And rather than just tallying likes or a selection of reactions that viewers have to choose between and click, Polygram allows users to see the face-based emotional response of those that viewed their post.

Along with face-controlled emojis -- which Polygram creates via a neural network that detects viewers' facial movements and then chooses the emoji that corresponds to their reaction -- the app offers analytics like where viewers are located geographically and breakdowns by demographic. And users can animate emojis that stay animated even when posted to other social media.

Some other features of the app include filters that actually make you more attractive rather than just add things to your image or change your voice, which Polygram says were designed by plastic surgeons. Additionally, for images you want to keep private, the app provides a "wipe-to-reveal" function that requires viewers to wipe away a fog-like covering in order to see the image underneath. But that blurriness rapidly reappears so recipients can never see the whole picture, preventing unwanted screenshots.

While new social networks often have a hard time breaking into the scene, Polygram's features are pretty neat and stand out from those offered by others. If you want to give it a go, the iOS version of the app launched today.

Polygram from Faryar Ghazanfari on Vimeo.

In this article: ai, design, emoji, FaceDetection, filter, gear, messaging, mobile, NeuralNetwork, Polygram, SocialMedia, SocialNetwork, video
All products recommended by Engadget are selected by our editorial team, independent of our parent company. Some of our stories include affiliate links. If you buy something through one of these links, we may earn an affiliate commission.