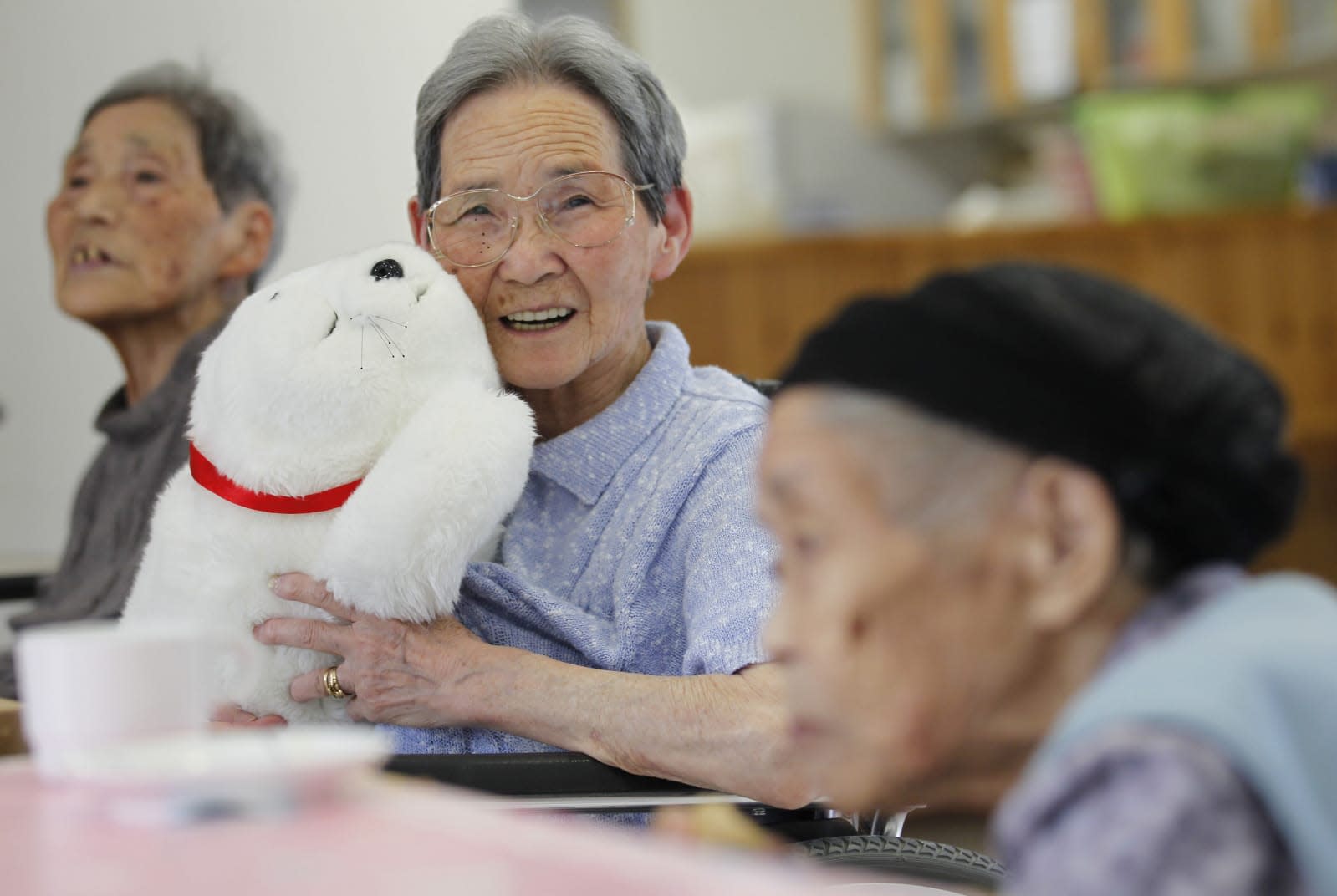 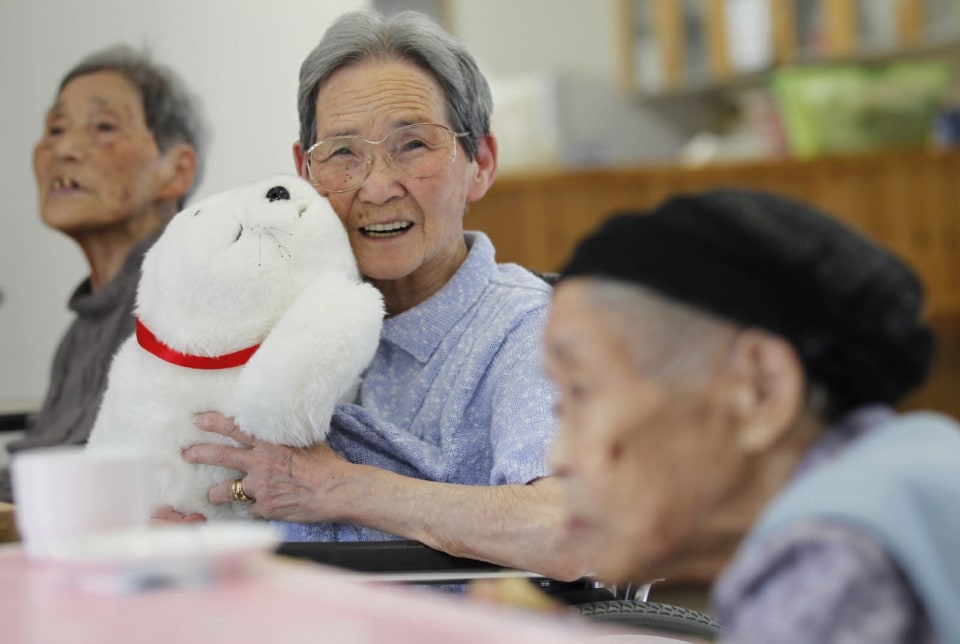 Relying on 300-pound bear-faced robots to help nursing home residents get out of bed in the morning is much more effective if those folks actually have a reason to get out of bed in the morning. Elderly people dealing with social isolation and loneliness are at increased risk of a variety of ailments, from cardiovascular disease and elevated blood pressure to cognitive deterioration and infection. In short, being old and alone can kill you. But robots aren't just good for improving the elderly's movement, they're surprisingly adept at keeping retirees socially, emotionally and mentally engaged as well.

These support robots are already springing up around Japan, where in 2016 the annual birth rate dropped below a million for the first time since 1899 and a quarter of the population is already greying. Japan's Ministry of Economy, Trade and Industry expects the robotic service industry to boom to nearly $4 billion annually by 2035 -- 25 times its current level. Though Europe and the US aren't facing quite the apocalyptic shortfall of qualified human caretakers that Japan is, these two regions are also accelerating the development and adoption of support robots.

Though the current generation of these robots are far from what The Jetsons' Rosie could provide, they can still offer geriatric patients a variety of services that fall, generally, within three categories: serving and fetching, communications and emotional support.

Serving robots do exactly that. Take the Care-o-bot from Fraunhofer IPA, for example. This robot has been deployed in a number of German assisted living facilities. It is able to ferry food and drinks to residents from the kitchen as well as keep them entertained by playing memory games to help keep their minds sharp. And to put those people at ease who may not be 100 percent onboard with having a 4-foot tall robot butler zipping around the halls, the Care-o-bot is programmed to behave like a gentleman, Dr Ulrich Reiser, Project and Group Leader at Fraunhofer IPA, wrote in a 2015 release.

Rather than over-promise what it's capable of by presenting an overtly human form, the Care-o-bot instead focuses on what's inside. "It always maintains a respectful distance, shows what it has understood and what it intends to do, while also being able to make simple gestures and reflect emotions," Reiser wrote.

Honda's Asimo robot, the one which famously fell down that flight of stairs, has come a long way since its humiliating faceplant. Not only can the current iteration climb stairs, it can jump and even use sign language. Honda's research team eventually hopes that Asimo will serve as a go-fer for people with limited mobility -- say, bringing a glass of water or turning off a light switch.

"ASIMO was designed to help those in society who need assistance, and Honda believes that these improvements in ASIMO bring us another step closer to our ultimate goal of being able to help all kinds of people in need," Satoshi Shigemi, senior chief engineer at Honda R&D Co., Ltd. Japan, told Business Insider. "We need to understand what people expect from ASIMO and what people want ASIMO to do."

These robots don't even need to be people-sized. The Dinsow elder care robot from CT Asia Robotics acts as a personal assistant of sorts. It helps its human remember to take their pills, tracks their health and automatically answers incoming calls from family and doctors. There's even a Dinsow Mini, released in 2015, which is small enough to live on the night stand of bedridden patients. The Dinsow does not come cheap, however. It retails for $2500, but yeah, you go tell Grandpa Joe he's got to keep staring at his in-laws until he keels over (or you find that Golden Ticket) because you didn't want to shell out for a little robobuddy for the man.

Of course, growing old in a nursing home is a vastly different experience than doing so in your own home. Care facilities are, by their very nature, communal -- there's nearly always someone around. But for elderly folks who live alone, the services that robots provide must go beyond turning off lights and fetching small items.

The ElliQ is a system similar to the Dinsow, available December here in the States. It's basically an interactive robot with an integrated tablet. Like the Dinsow, ElliQ tracks its users pill regimen and connects them to family, friends, and medical professionals through video calls and social media. It also acts as a companion. It can check the weather and suggest outdoor activities so its user doesn't stay all cooped up for extended periods and go stir crazy. More importantly, the ElliQ learns. The system utilizes machine learning to figure out its user's preferences and quirks. It can then make proactive activity recommendations based on what it knows its user enjoys.

Sometimes, elderly folks who lie alone don't just need a little buddy, they need a guardian as well. And that's where the likes of the MiRo robotic dog comes in. The MiRo is a mechanized canine companion, like the AIBO but more capable. Like the other robots discussed today, it runs the typical gamut of pill regimen management, general companionship and appointment reminders. But it also keeps an eye on your health.

"It tries talking to you," MiRo's designer, Sebastian Conran, told The Guardian, "and then it will send a signal to the hub saying there seems to be a problem. The hub will then broadcast on the home speaker, asking again if you're all right, and telling you to slap your wrist." That refers to a biometric sensing wristband that the user wears which tracks their vitals.

"If you slap your wrist the process will stop but will be logged," he continued. "If you don't slap your wrist it will... go to a carer, who can see your heart rate and body temperature, and rewind your life using the cameras in the home to see what happened. So when the ambulance gets there, they'll know what they're working with." Of course, this scenario also assumes that the person is comfortable living in a digital fishbowl, surrounded by a suite of monitoring cameras and IoT sensors. Whether your grandma, who still refers to the microwave as "the science box," will be ok living in 1984-like conditions -- even if it's for her own good -- remains to be seen.

Sometimes all you need in a robotic pet is something soft to snuggle with and boy is the Paro perfect for that. Designed to resemble a Canadian Harp seal pup, the Paro has been employed in Japanese nursing homes since 2003. It's essentially a pettable ball of fur that can't be hurt even if someone goes full "Lenny" on it. But the Paro doesn't just respond with lifelike movements to tactile stimuli, it also recognizes temperature, posture, and light. Say its name or shower it with praise, and the Paro will respond.

The therapeutic results so far have been impressive. "We're already finding that, for some difficult cases of depression, this could be a catalyst that helps people move on and get back to their healthy state," said Dr. Simon Davies, a staff psychiatrist and clinical scientist at Canada's Centre for Addiction and Mental Health. "It's very therapeutic -- another approach to use alongside all the regular treatments proving effective in depression treatment."

However, not all medical care professionals are thrilled about the coming support robot revolution. "Social isolation of seniors is a significant concern amongst gerontologists and caregivers alike. Robot care, in my mind, would only compound that issue," Susan Madlung, gerontologist and Clinical Educator for Regional Programs and Home Health Re-Design at Vancouver Coastal Health, told AgingCare.

She expects that it may be a generation or three before people are inherently comfortable with being cared for by a robot. "Although robots might seem like a good response to the growing need for caregivers, I could see this as being quite detrimental to the emotional and psychosocial well being of anyone, not just seniors," she continued. "Humans need humans."

In this article: Business Insider, Centre for Addiction and Mental Health, gadgetry, gadgets, Grandpa Joe, Japan, medicine, Ministry of Economy, Trade and Industry, Paro, robots, Simon Davies, tomorrow, Vancouver Coastal Health
All products recommended by Engadget are selected by our editorial team, independent of our parent company. Some of our stories include affiliate links. If you buy something through one of these links, we may earn an affiliate commission.