LG V30 hands-on: The phone the G6 should've been

We're cautiously optimistic, but it's been ages since LG built a phone this good.

Despite all its resources and technical know-how, LG has always felt like an also-ran in a race dominated by Apple and Samsung. The G4 is the subject of a class-action lawsuit. The modular G5 was an ambitious nonstarter. Last year's V20 and the G6 were welcome steps forward, but neither managed to generate that much excitement.

The company's V30 smartphone just might be able to change that. Announced today at IFA, the V30 is meant to be as much a creative tool as it is a device for taking phone calls. This time, though, LG wisely excised some gimmicks, leading to a device that, after a week of living with a preproduction model, feels more polished and more focused than I dared expect. I'm trying to be cautious with my optimism, but it's honestly a little tough: I haven't enjoyed an LG phone this much in years.

A lot of that is thanks to the V30's clean, comfortable design. The V20 and the G6 seemed to revel in their boxy frames, but the V30 has rounded edges and slightly curved panes of Gorilla Glass 5 wrapped around a glossy metal frame. It's pleasant in hand, almost shockingly light and a pleasure to look at. (I never thought I'd give that last compliment to an LG phone, but here we are.)

LG didn't skimp on the niceties, either: The V30's body is rated IP68 for water- and dust-resistance, there's a headphone jack on the top-right corner and it takes microSD cards as large as 2TB to supplement the included 64GB or 128GB of storage. You'll find an industry-standard USB-C port on the bottom for charging, and a combination fingerprint sensor/home button on the V30's back, just beneath its updated dual camera. (More on that later.) Fans of the V20's removable battery are in for a shock, though: The V30's 3,300mAh cell is sealed inside the phone's frame. Aside from that, LG did an excellent job with the V30's fit and finish, and things get better when you fire the phone up. 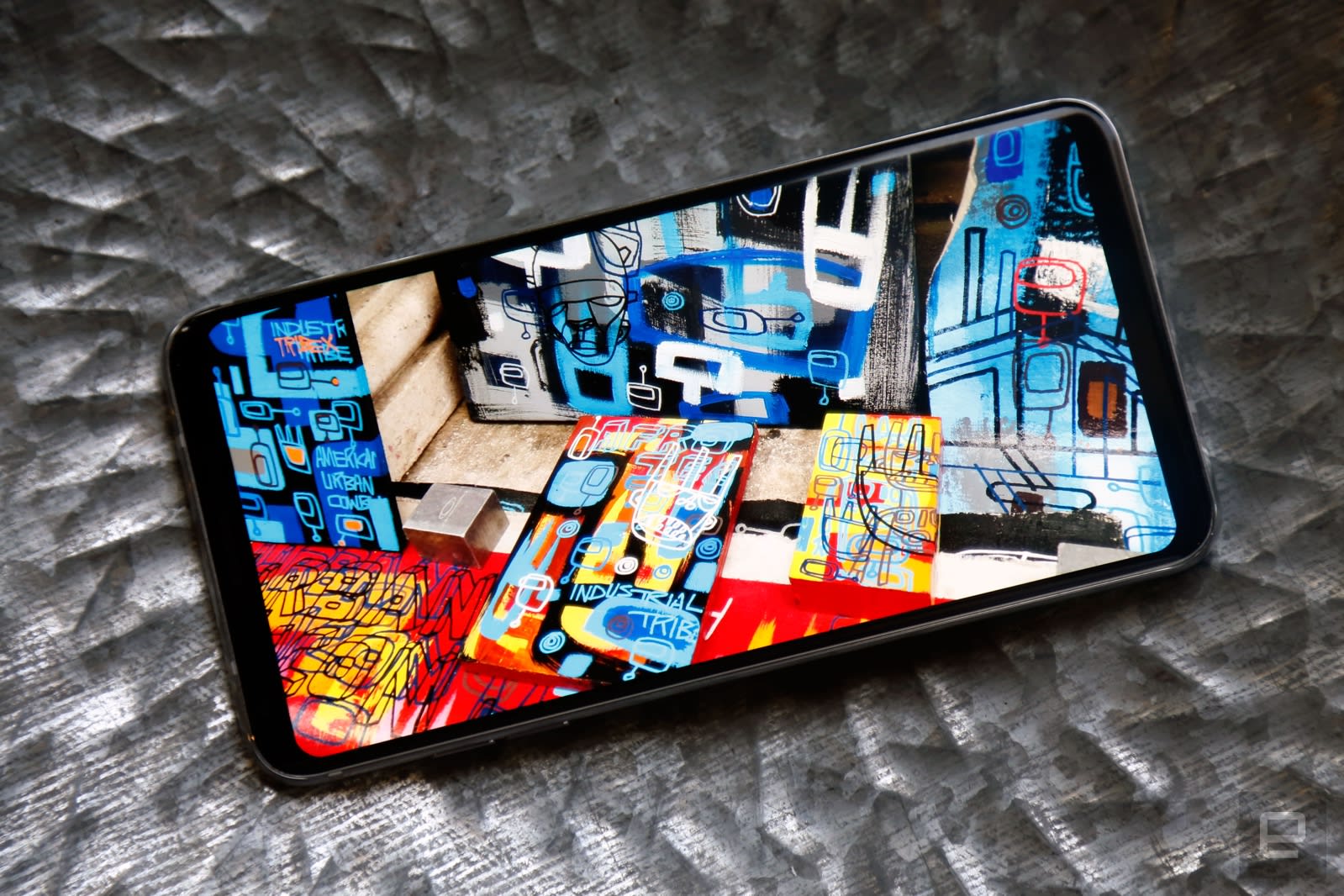 See, the V30's 6-inch OLED screen takes up almost all of the phone's face; the bezels here are narrower than the ones flanking the Note 8's massive display. So far, it's plenty bright, with great viewing angles and colors that are vivid but not overdone. And, just like the G6, the display here is atypically long: It runs at 2,880 by 1,440, which means it's twice as long as it is wide. LG's argument is that this provides ample room for split-screen multitasking, and that's definitely true -- I'm just not sure who does this regularly. I only wish the glass covering the screen were a little more durable. It's been less than a week and I've already put a gouge into it that's impossible to un-see.

In any case, LG's decision to go with a nearly edge-to-edge screen means there was no room for a secondary display, a hallmark of earlier V-series phones. I say good riddance. Having a little extra space above the rest of the screen for notifications and app controls was neat in theory, but it always felt more gimmicky than valuable. Instead, LG put all those second-screen shortcuts into a "floating bar" that you can invoke by tapping a button on your home screen. Having the option to quickly skip songs or add an event to your calendar is nice, but the phone has to be unlocked and on before you can access those shortcuts; that makes the whole thing even less convenient than before. No wonder LG leaves this feature off by default. 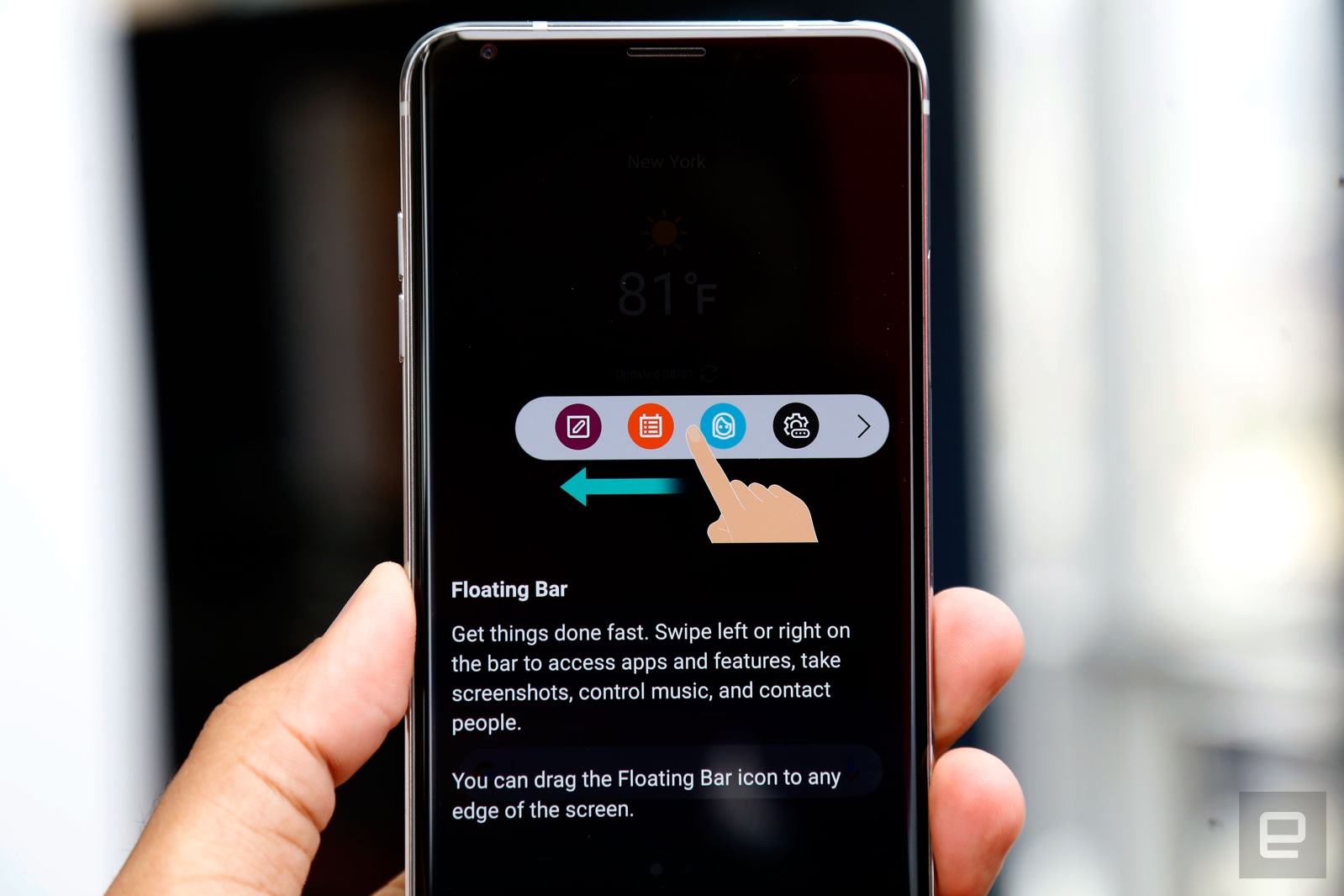 LG took a restrained approach with the rest of its software. The V30 runs a version of Android 7.1.2 that has been lightly painted over with LG's custom interface. For the most part, LG does a very good job at giving you access to Nougat's core functions without getting in your way. The biggest change to the stock Android experience is the iPhone-style home screen setup -- by default, all your apps live on your home screens rather than in a separate launcher window. (You can bring back the classic launcher easily if that's more your speed.) I haven't uncovered all of LG's other changes yet, but there is one more worth pointing out. When you swipe down on a home screen, you're treated to a Google-powered search bar that peeks inside your installed apps to find whatever you're looking for. This in-app search feature actually made its debut on the V20 last year, but it's as useful as ever.

LG's light touch with software also keeps the phone running smoothly, though to be fair, there's a lot of horsepower here. The V30 uses the ubiquitous Qualcomm Snapdragon 835 chip paired with 4GB of RAM, making it an exceptionally snappy performer. Did you honestly expect anything else? None of the games or weirdo multitasking scenarios I attempted presented any trouble, but I'll have the final benchmark comparisons between the V30 and the rest of this year's pack of flagship phones when LG makes retail-ready models available. 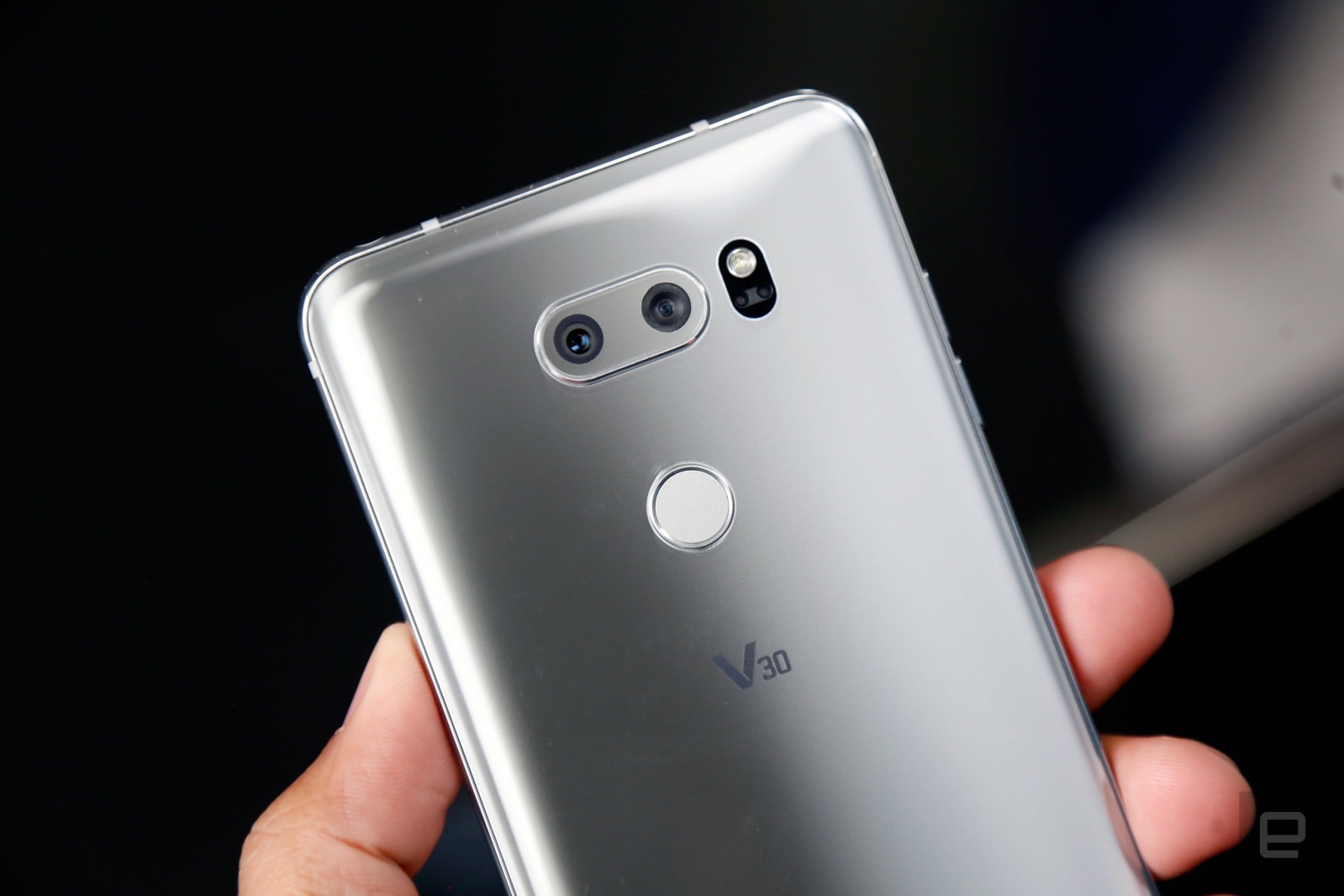 Now, about that dual camera. Unlike the G6, the V30 pairs a 16-megapixel main camera (complete with f/1.6 aperture lens) with a 13-megapixel wide-angle camera for when you want to capture more of the action in front of you. That's a little different from the dual cameras we've recently seen in phones like the Essential PH-1, but I've always preferred this approach since it's way more flexible in the field. (Snapping photos with different perspectives without even having to move is also lots of fun.)

More importantly, most of my early test shots came out great; the colors were spot-on and nicely detailed. Naturally, photos taken with the main camera seem a touch crisper and more nuanced since the sensor captures images at a higher resolution. The wide-angle camera is no slouch either; it was great for shooting landscapes in Central Park over the weekend. Not all is perfect, though. So far, the V30's cameras suffer from a lot of hazy, soft edges in low light -- even the main camera with its wide aperture had trouble producing crisp images. The Galaxy S8s seem more capable in the dark, but here's hoping the final batch of V30s fixes this issue. Really, though, LG built the V30 to shine when shooting video. For non-auteurs like me, LG's CineShot movie mode packs features that approximate high-end cinematography without any of the effort. Applying color presets to your footage is helpful for capturing the right atmosphere in a scene, and I really dig its Point Zoom feature. Long story short, you can tap anywhere on the screen to lock your focus and zoom in and out, even when your subject is lurking in the corner of the frame.

If you're a vlogger or a YouTuber or someone who wants to try shooting serious footage with a smartphone, you'll want to stay in the manual mode for full control over your footage. All the usual settings are there -- you can tweak shutter speed, exposure, ISO and more -- but you have options for changing your frame rate and bitrate. Cinematographers (or wannabes) will also enjoy the ability to export footage in LG's CineLog format, making color grading easier once they get the files off their phones. 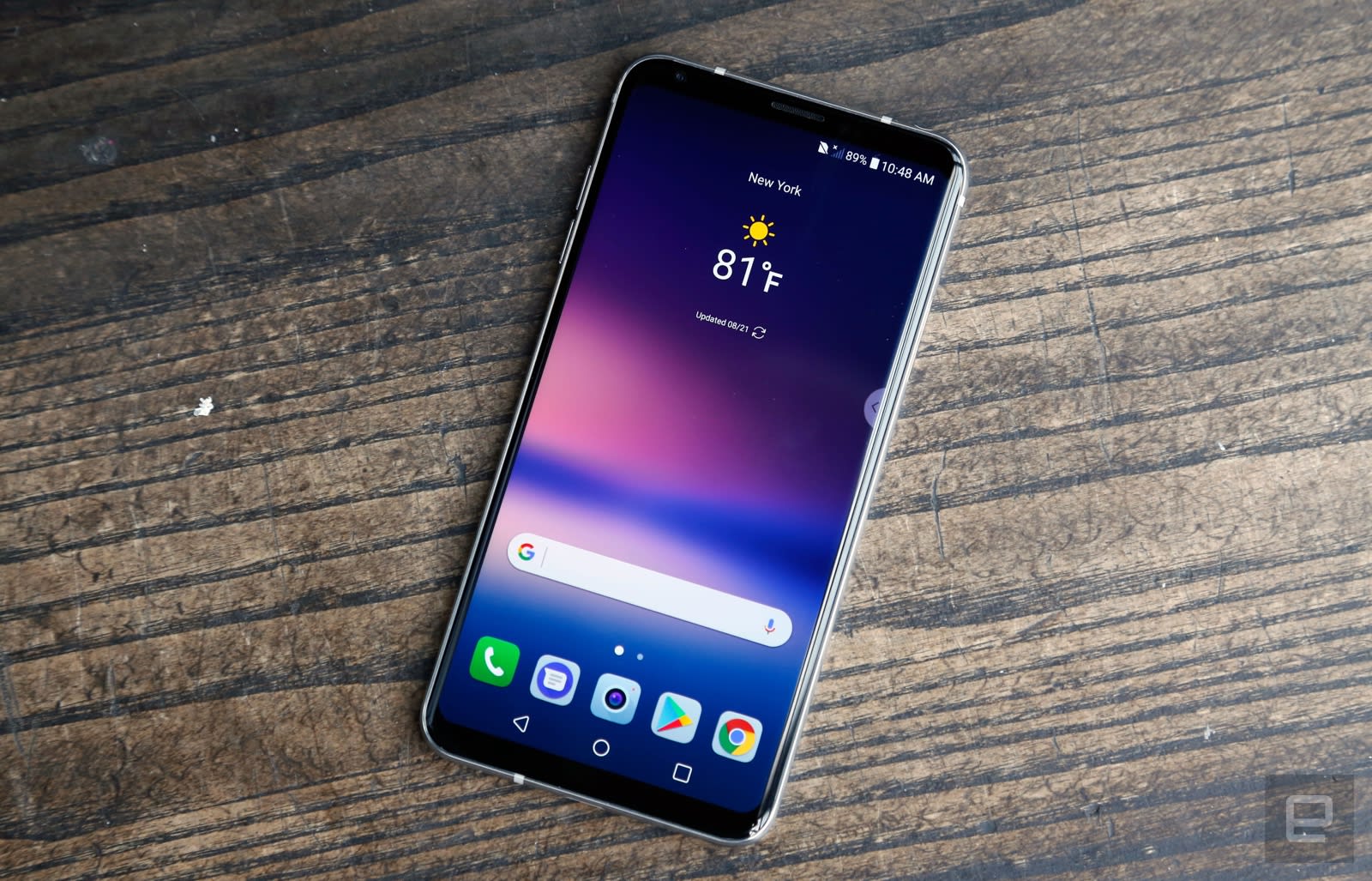 Meanwhile, plugging in a pair of headphones allows to you use the built in HiFi Quad DAC -- you know, the one the US version of the G6 didn't get. So far, it has made a notable, if not overwhelming, difference. Music I've listened to on the V30 and all benefited from a little extra depth; songs sounded a little brighter and more spacious than before. You can change how much of an impact the DAC has with some handy presets, too, and it's worth taking the time to get the settings just right. The LG V10 from way back when offered some more nuanced controls, but no matter: The V30 still makes for great listening.

After years of being underwhelmed by LG phones, it feels very strange to like one this much -- especially an unfinished one. Sure, LG made some compromises, and I can imagine some long-time V-series fans not being pleased with the company's shift in strategy and design. That's fair, but I can't get too upset: In the process, LG has managed to build what certainly feels like its best phone in ages. Here's hoping the final, review-ready units don't take too long getting here.

All products recommended by Engadget are selected by our editorial team, independent of our parent company. Some of our stories include affiliate links. If you buy something through one of these links, we may earn an affiliate commission. All prices are correct at the time of publishing.
View All Comments
LG V30 hands-on: The phone the G6 should've been