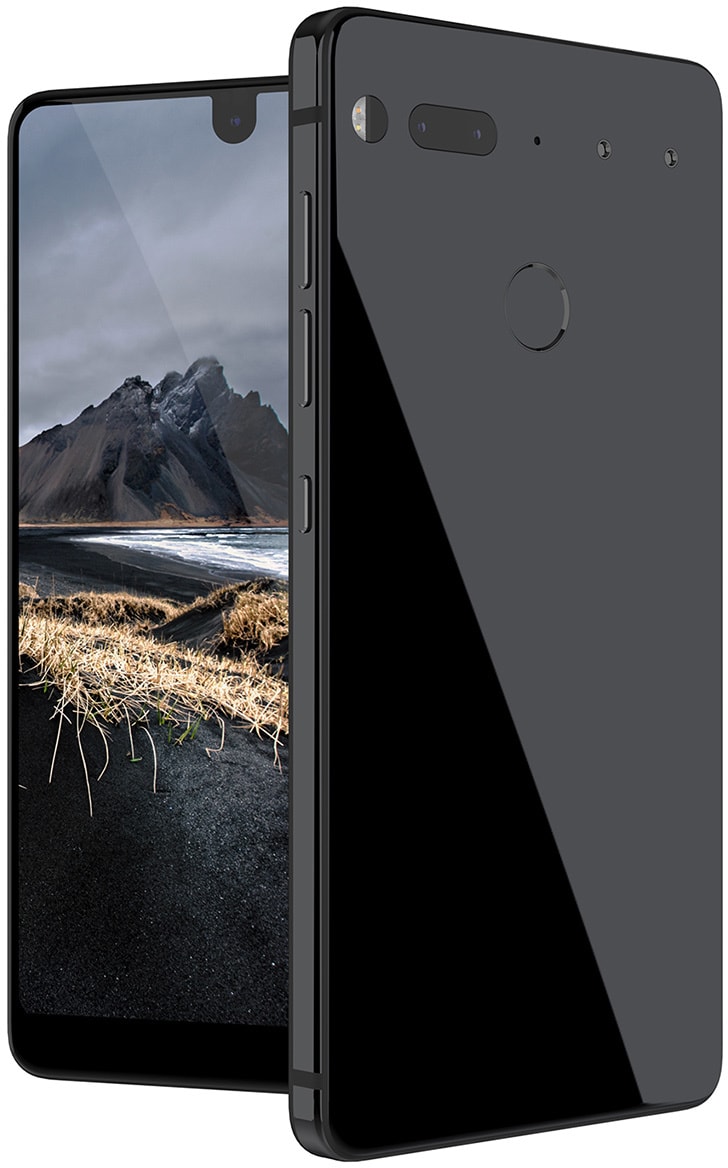 Andy Rubin was disillusioned. He helped build the Android operating system. He watched as Google acquired the company, and he steered development on the mobile OS for years after that. And somewhere along the way, he grew a little weary of how the smartphone market worked.

To hear him tell it, the mobile industry prioritized iteration over innovation, to the point where it centered itself around only two companies: Apple and Samsung. Convinced that Apple's premium phone business model would work for a startup, Rubin set about building his own phone, and here we are. That startup, Essential, offers its new PH-1 as a remedy to the industry's ills. It's a premium smartphone with an impeccable pedigree that embodies progress and choice and openness. That was the idea, anyway.

Here's the thing about lofty goals though: You're almost never going to achieve them in one shot. And really, that's the Essential PH-1 in a nutshell. It's an exceptionally crafted device and a stunning first effort from a company that didn't exist 18 months ago. While the PH-1 stands as a testament to Rubin's vision, a few shortcomings keep it from being as truly great as promised.

From its impeccable fit and finish to its impressive bezel-less design, the Essential PH-1 is a truly beautiful smartphone. Even better, it boasts impressive performance and battery life, not to mention one of the cleanest Android experiences you'll find out there. Unfortunately, smartphone cameras have gotten so good that Essential's purely OK shooter will frustrate some. The lack of certain popular niceties, like a headphone jack and water resistance, also make the PH-1 a tougher sell than expected. All told, this is a phenomenal first try and an undeniably solid device, but we're really looking forward to Essential's next attempt.

Be the first to review the PH-1?
Your ratings help us make the buyer’s guide better for everyone.
Write a review

I've been testing the black PH-1 ($699), and it looks more like a blank slate than any phone I've tested in a while. There are no logos on the phone, no branding, no FCC labels or capacitive buttons (though the company's engineers did consider them). Peer closely enough around the front-facing camera and you'll spot a tiny cutout for the earpiece and an even tinier notification LED. Some will find the aesthetic a little too nondescript, but others (like me) will enjoy the intentional starkness. That minimalism gets disrupted when you turn the phone over. There you'll find an LED flash, a 13-megapixel dual camera, a fingerprint sensor and two tiny, metallic spots.

This is Essential's (much smaller) take on the Motorola's Mod connector for its modular smartphone add-ons. Accessories, like a 360 camera I haven't been able to test yet, magnetically attach to that spot and can transfer power and data into and out of the phone. It might seem a little awkward to snap things onto a phone's corner, but Essential made the choice deliberately.

By putting the connector on a corner, the company is theoretically able to change the way future devices look without necessarily giving up the option of backward compatibility. Consider the most recent Moto Z phones: Motorola couldn't change the design much, because its Mods have to sit flush against the phone's backs. Essential's decision was a savvy one, but we'll soon see how many companies are willing to invest in a startup's ecosystem of accessories.

While the phone's design is intentionally subtle, that 5.7-inch Quad HD screen definitely isn't. The PH-1's defining feature is how its LCD display stretches almost completely across the phone's face, leaving just a few millimeters of black chin beneath the panel. It's stunning. When the screen is off, we're left with an obsidian slab; when it's on, it feels like something out of the future. Well, the near future, anyway. We've seen phones with expansive displays before, but there's something sumptuous and thrilling about a phone that's basically all screen. Arguably more impressive is how a divot has been cut out of the screen to accommodate the 8-megapixel front-facing camera. It sounds weird in theory, but since Android's notification bar fills in from the sides, the camera never actually gets in the way.

Yes, it's almost impossible at first not to gawk at the PH-1's screen. The gap between the panel and the glass that covers it may as well not exist, so viewing angles are excellent. Colors are clean and vivid, though they lack the telltale punchiness of AMOLED screens (most likely due to cost). As technically impressive as it is, the screen does fall short in a few ways. 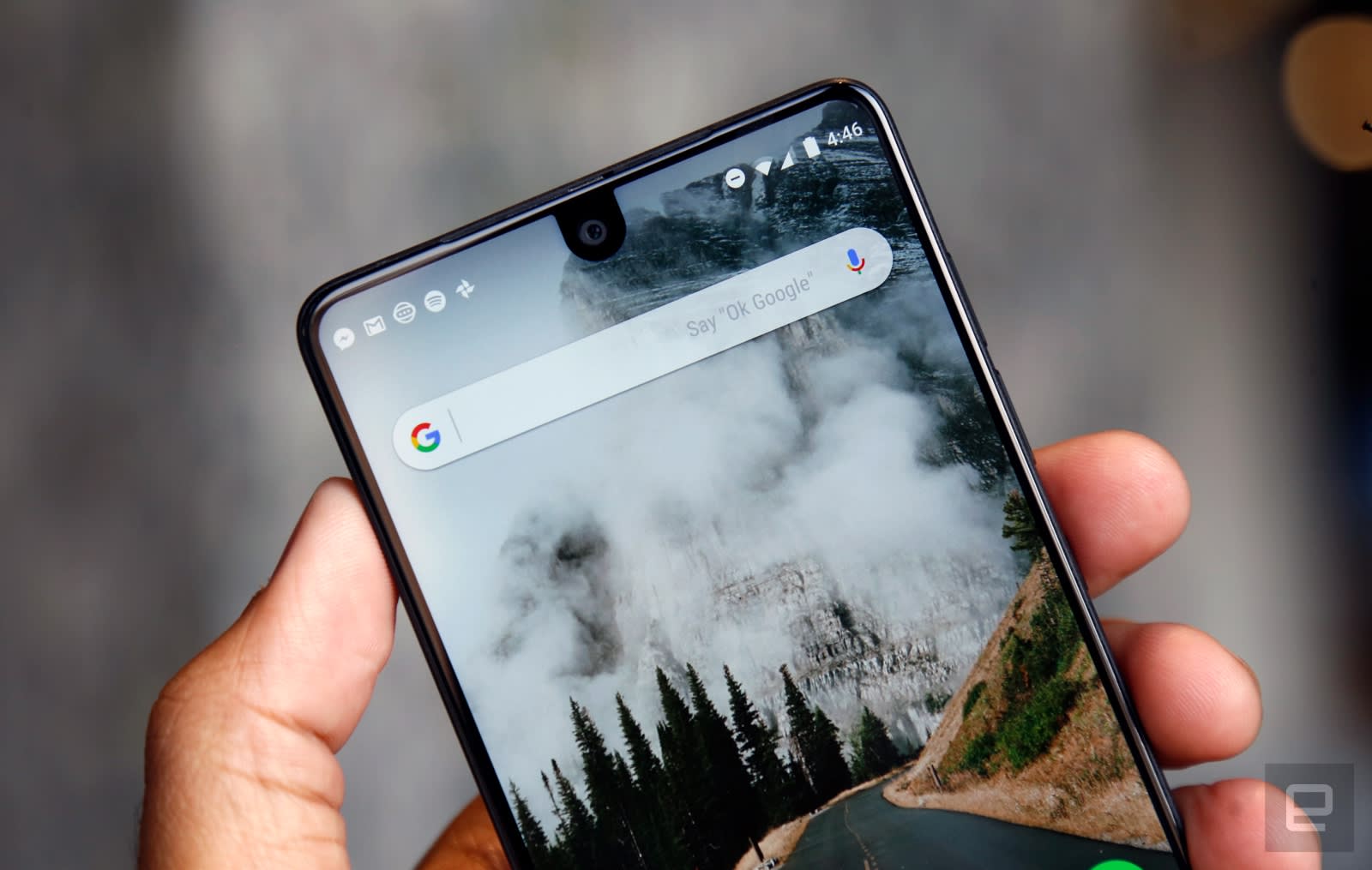 For one, I wish it were a little brighter: It's perfectly readable in broad daylight, but phones like the Galaxy S8 and iPhone 7 are brighter and more clearly legible under the sun. It's also a bummer to come across apps that don't take full advantage of that extra screen space. The phone's dialer, Chrome, Twitter, Spotify and more are all bounded on the top edge by a black bar, robbing you of the visual impact that comes with seeing, say, a Google map that stretches all the way across the phone. Unfortunately, this was the case with most of the apps I've tested this past week.

Other apps are prone to different issues. Spotify, for instance, has a lot of extra space below the notification bar, pushing all the actual content down a little more than expected. This issue has been less common, but it's still mildly annoying whenever I come across it. Considering how niche the Essential phone is right now, it's unclear when or if developers will update their apps to accommodate this eye-catching screen. 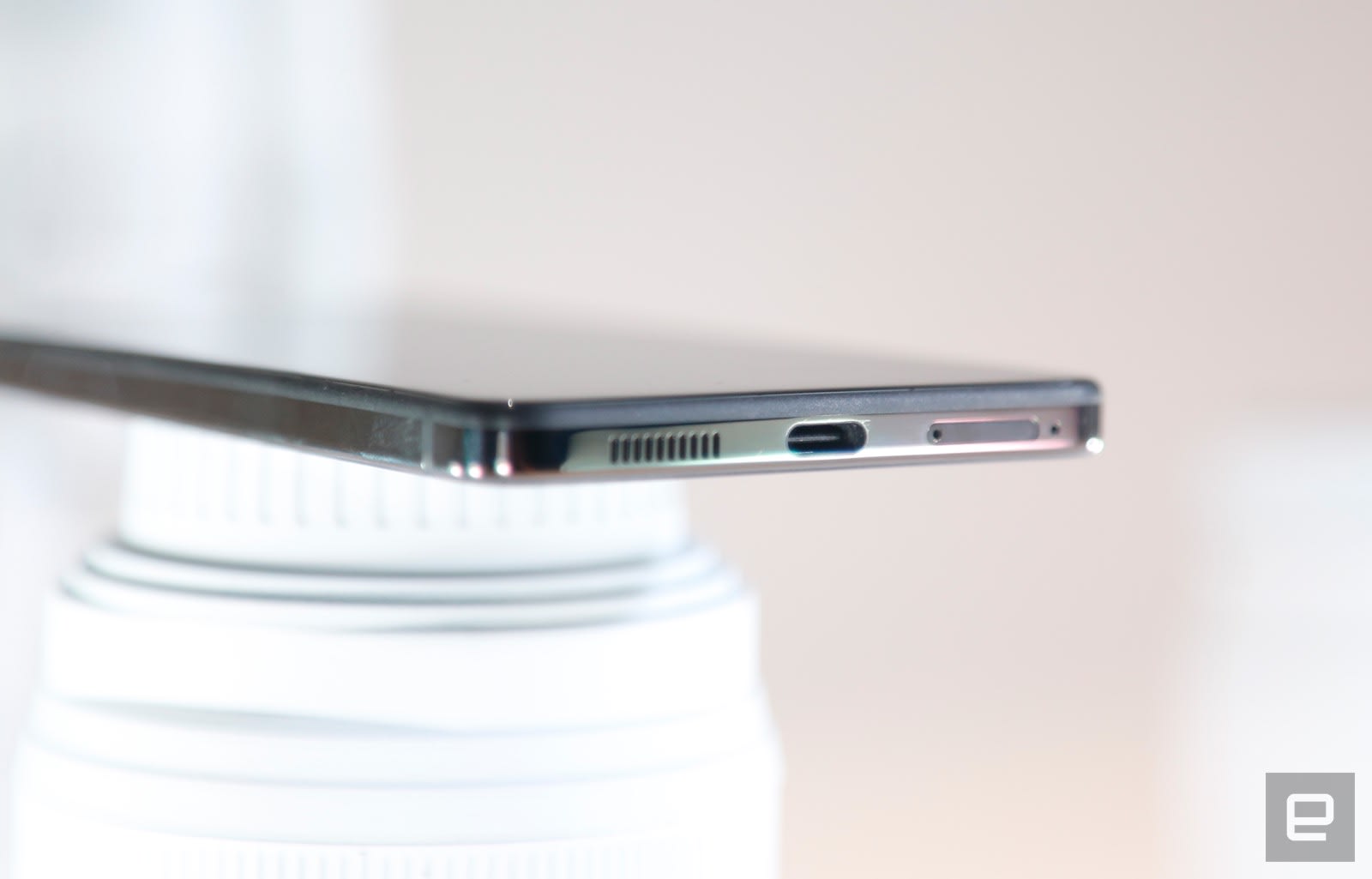 Meanwhile, the Essential's single speaker mostly just gets the job done. It's louder than I expected, but audio comes out sounding pretty thin and it's easy to accidentally cover the grille with your finger when holding the phone sideways. If you spend most of your day listening to audiobooks, podcasts or music that doesn't feature prominent bass, the speaker shouldn't bother you much. As always, though, you're better off using a pair of headphones, which in this case means having to rely on an included USB-C adapter. I had no issues with audio quality through the adapter, and its short, braided cable gave me hope that it would survive a long-term stay in the minefield that is my backpack. I was also a little concerned that such a small earpiece wouldn't sound good, but it made for pleasant for voice calls; no one on the other end had any complaints about the audio quality either. 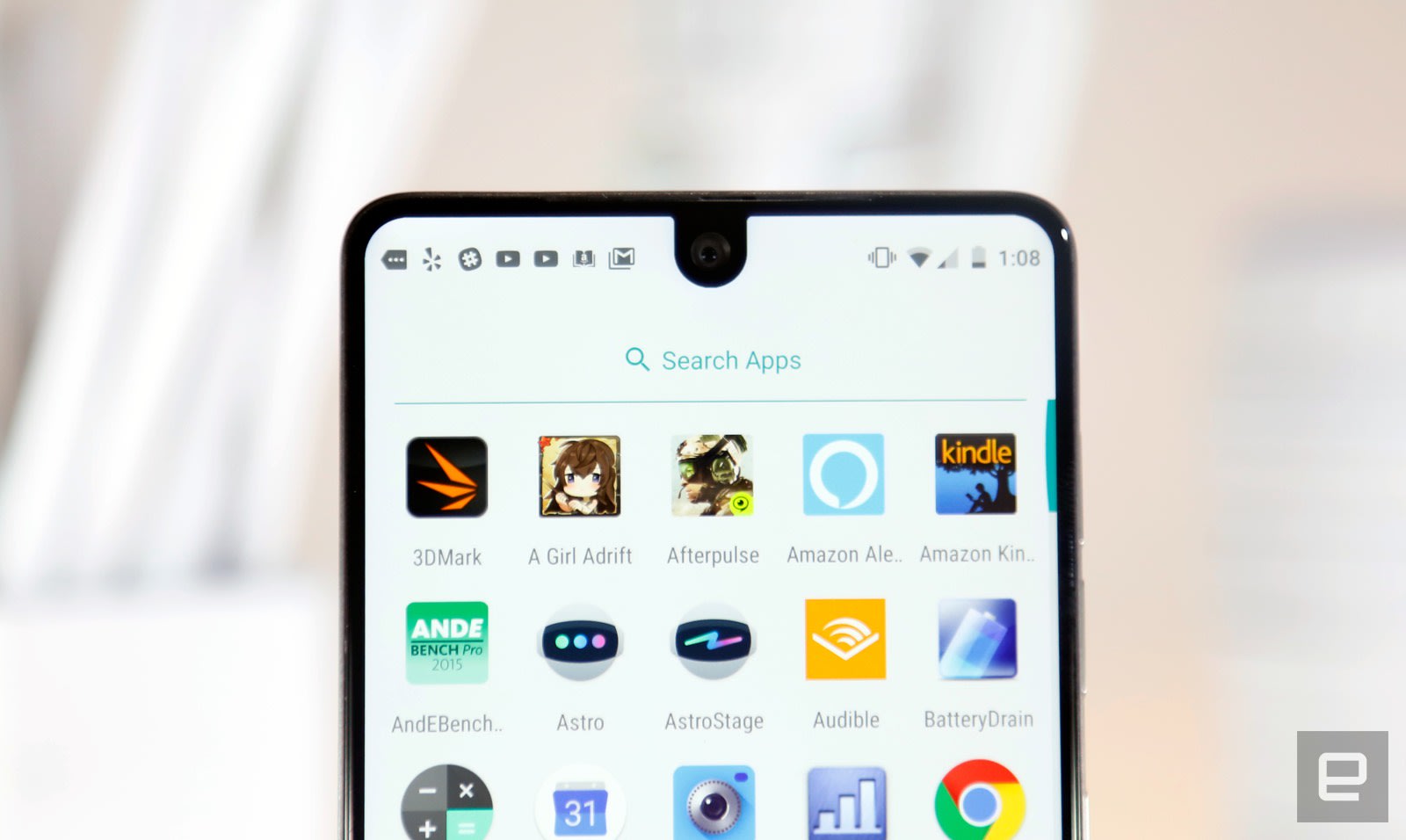 And the blank slate theme continues. The PH-1 runs a clean, mostly untouched version of Android 7.1.1. I've said that about other phones before, most recently the Moto Z2 Force, but Essential takes cleanliness to a different level. I've only spotted a handful of changes here. For starters, the typical Android notification bar is thicker than usual, because it has to clear the camera sitting right in the middle of it. There's also an option in the settings to discreetly send usage and diagnostic data back to Essential so the company can smooth out potential performance issues. Really, the biggest change to bare-bones Android is the inclusion of a custom camera app, which we'll get to in a little bit.

The situation is a little different for Sprint customers: Upon activation, the My Sprint and Tidal apps are automatically installed. Considering how overzealous some carriers are when it comes to preloading apps to fulfill business agreements, Sprint's minimal overreach feels downright refreshing. The rest is just Nougat as we all know it, and Essential has pledged to deliver Android updates to PH-1s in the wild for two years and security updates for three years.

Now, as much as I love stock Android, I have to wonder if it's enough to whet the average consumer's appetite for functionality. After all, there's a reason Google offers more than just stock Android on its flagship Pixel phones: It's all in the name of helping users more easily accomplish the things they want to do. I respect Essential's devotion to openness and cleanliness, but there's a way to deliver subtle, powerful changes without completely rewriting the playbook. In any case, I'm sure the decision to deliver one of the purest Android experiences out there won't hurt the startup's chances too much. If anything, it offers an extra dose of geek cachet.

Like many other top-tier smartphones, the Essential packs a dual-camera setup. Unlike a lot of other top-tier smartphones, however, the Essential blends one 13-megapixel color sensor with one 13-megapixel monochrome sensor, as opposed to, say, a wide-angle and telephoto camera. The idea is simple: When shooting normally, color information from one sensor is combined with the extra detail capture from the black-and-white camera to produce photos that embody the best of both worlds. When there's good light to work with, the results are decently impressive: Colors are a bit more subdued than with rival cameras but still quite nice, and there's a decent amount of detail to be found. Overall, devices like the Galaxy S8 and last year's Google Pixels did a better job, but the Essential was never too far behind. 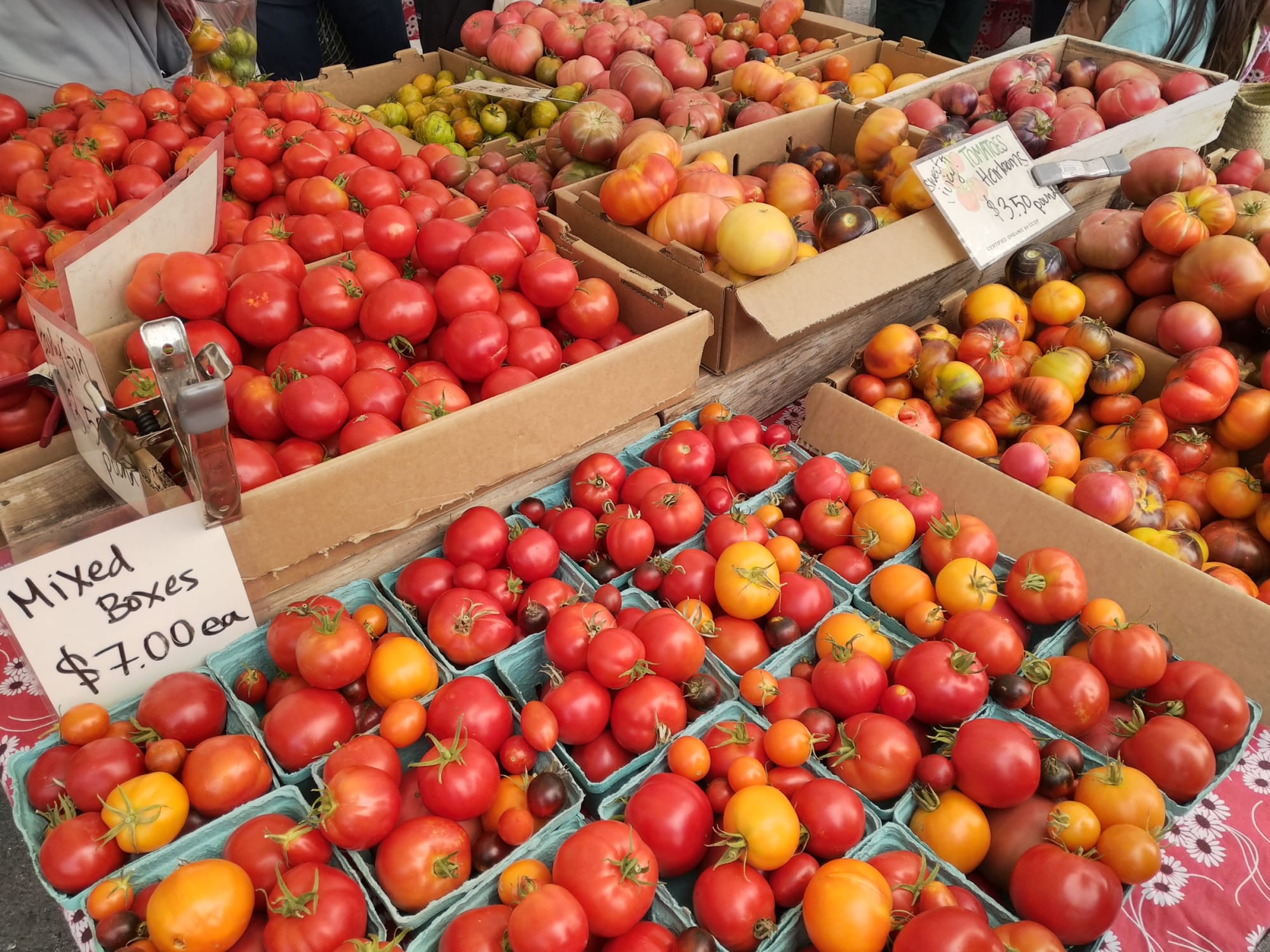 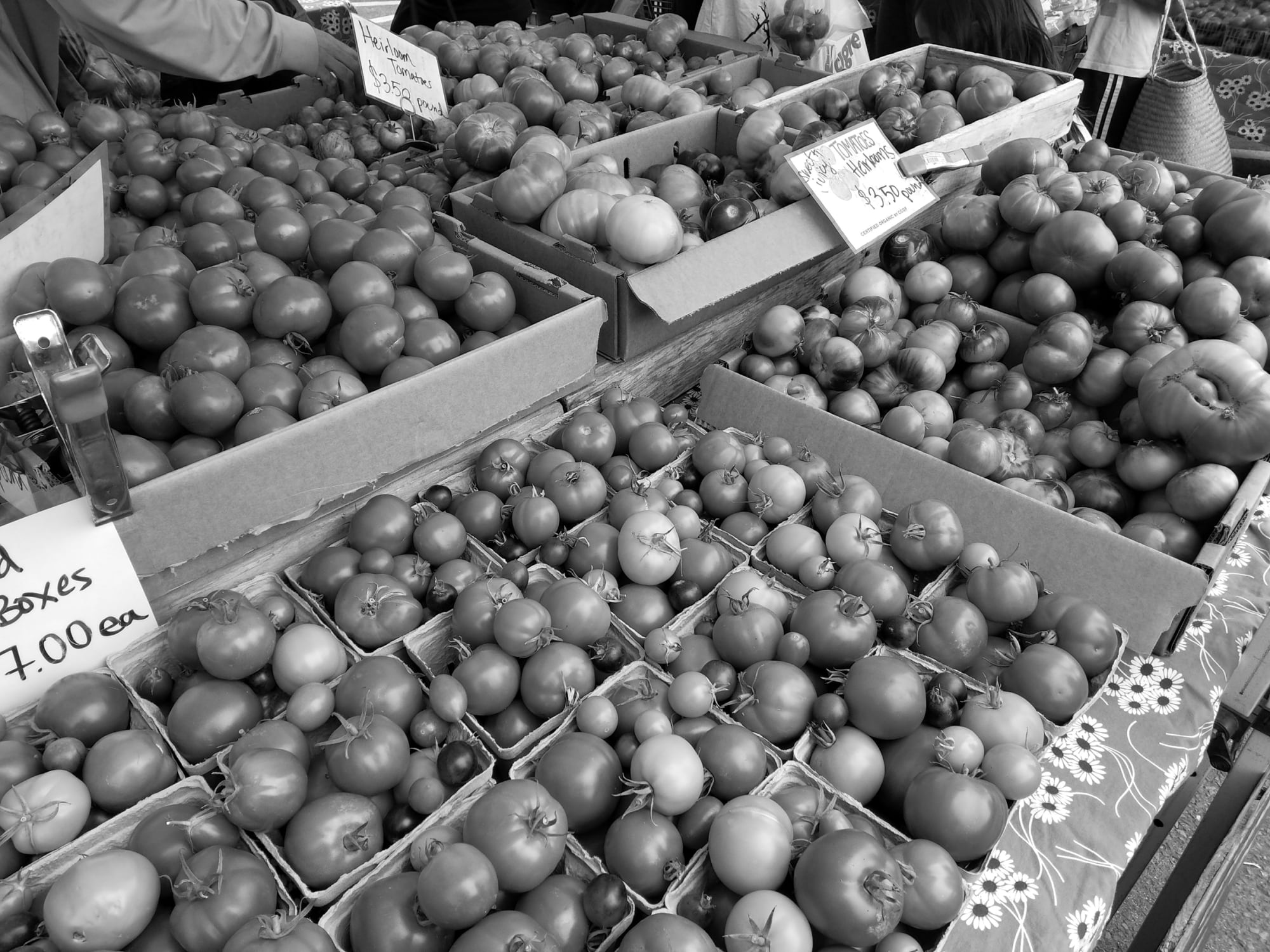 Now, here's where things get a little tricky. Since I received the phone last week, Essential has pushed out two -- two! -- updates, both heavily focused on improving the camera. Before any of the updates went live, the PH-1 was frankly awful in low light; you'd find lots of fuzzy edges and an unreasonable amount of grain and discoloration, even when shooting in locales that weren't that dim. After multiple updates, the performance has leveled off to the point where the Essential is mostly usable in low light (though it helps to keep your expectations low).

Since there's no image stabilization here, you should still expect to see lots of indistinct edges in the dark, but better image processing has reduced the grain you'll see to manageable levels. Compared to before, this is a huge improvement. Compared to the rest of this year's flagship smartphones, the Essential phone's camera still disappoints. The 8 megapixel front-facing camera works well -- at least, most of my selfies were nicely exposed with accurate colors.

In this article: android, andyrubin, essential, essentialph1, essentialphone, gear, mobile, nougat, ph1, review, smartphone
All products recommended by Engadget are selected by our editorial team, independent of our parent company. Some of our stories include affiliate links. If you buy something through one of these links, we may earn an affiliate commission.