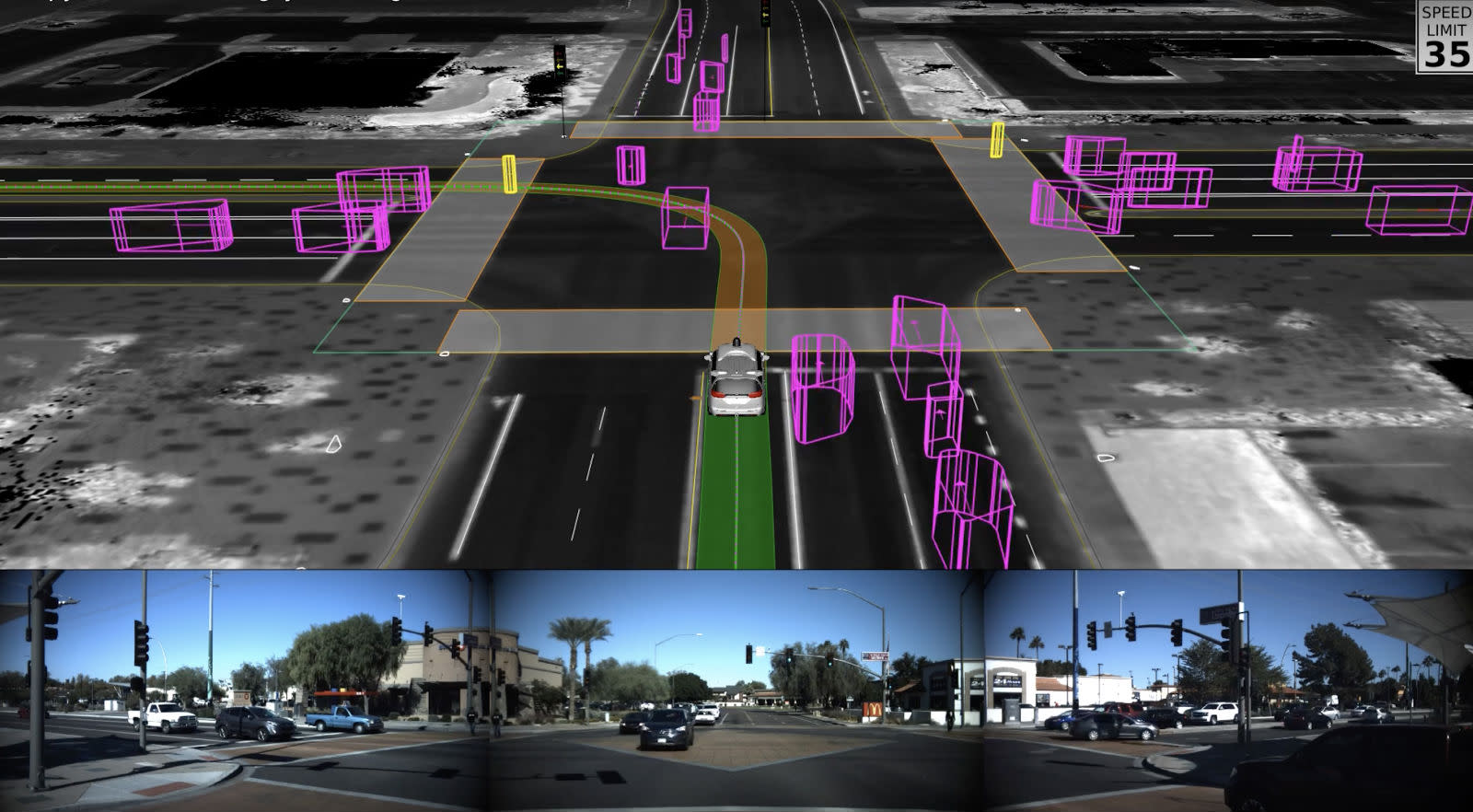 Last month, Alphabet offered up its first proper look at Carcraft. The simulation is a virtual home away from home (the real world) for Waymo's self-driving vehicles. Here, you'll find a replica of every real-world mile the autonomous cars have driven. And, each day, Waymo's 25,000-strong fleet of Chrysler Pacificas traverse 8 million of these simulated miles. That's according to the company's latest blog post, which further breaks down its software. By honing in on a traffic signal in a particularly busy intersection, Waymo demonstrates how Carcraft can teach its connected vehicles to envision an exhaustive amount of scenarios (including hazards). In turn, the cars can then practice the manoeuvres that will help them safely navigate these situations in the real world.

First up, the company uses its custom-built sensors (found on top of its vehicles) to digitize a road. In this case, it's focussing on a five-lane intersection in Mesa, Arizona - - complete with identical dimensions, lanes, curbs, and traffic lights. Its software can then drive this small stretch of tarmac thousands of times over. Now, it knows "to inch forward at the flashing yellow signal, and slot in after oncoming traffic."

That's not all. To make its cars even smarter, Waymo's simulation takes one turn and throws thousands of variable situations in the mix. Everything from the speed of oncoming cars and the timing of traffic lights can be manipulated to prepare its vehicles for real-world conditions. On top of that, Waymo also changes the original street scene, by adding in cars, pedestrians and cyclists that may not have been present in the original capture. This process, known as "fuzzing," can even simulate motorbikes splitting a lane, or joggers zig-zagging across the street. The end goal, however, remains the same: To get the cars ready for the chaos of the real world.

Once a virtual car learns a new trick, it can share it with the remainder of Waymo's fleet. To ensure the vehicles have got the skills down, the company doubles up with real-world driving and its test track.

Waymo writes: "One of the key advantages of simulation is that you can focus on the most interesting interactions  -- flashing yellow signals, wrong-way drivers, or nimble pedestrians and cyclists  -- rather than monotonous highway miles."

In this article: AutonomousVehicles, carcraft, gear, google, Self-drivingCar, transportation, waymo
All products recommended by Engadget are selected by our editorial team, independent of our parent company. Some of our stories include affiliate links. If you buy something through one of these links, we may earn an affiliate commission.