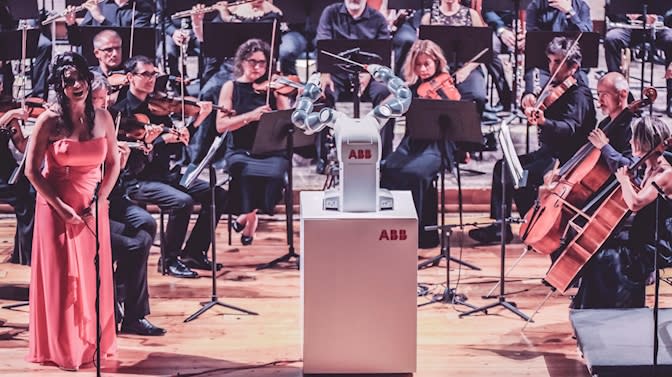 Just a month after humanoid robot Pepper conducted a Buddhist burial ceremony, a robo-contemporary has conducted the world-renowned Lucca Philharmonic orchestra alongside opera great Andrea Bocelli. Do robots need a heart to complete tasks of passion? As shown by YuMi, the robotic maestro designed by Swiss Firm ABB, maybe not.

Under the fresco-covered ceiling of a theatre in Pisa, Italy, the two-armed YuMi directed a program titled "A breath of hope: from the Stradivarius to the robot" for guests attending the first International Festival of Robotics. YuMi's movements are incredibly fluid and nuanced -- as you'd expect the gestures of a world-class composer to be -- with the orchestra's resident conductor Andrea Colombini saying that "everything was perfect, especially in the length and in the speed of the gesture, which is very important."

The robot's performance was developed in two stages. Firstly, Colombini's movements were captured in rehearsal through a process called "lead-through programming", where YuMi's arms were guided to follow the motions. Then the movements were fine-tuned and synchronized with the music.

"I think tonight we're truly making history and writing the future of robotics applications," said ABB CEO Ulrich Spiesshofer after the performance. "YuMi demonstrated how intuitive, how self-learning this machine is -- how wonderful our software really is in learning the movement of a conductor, sensing the music, and really conducting an entire team."

YuMi isn't designed to replace orchestral conductors, of course. The machine is a proof of concept, demonstrating what's possible with ABB's software. However, Colombini and his orchestra have said YuMi could play a great role during rehearsals, when the conductor is absent.

In this article: ABB, application, FestivalOfRobotics, Italy, machine, orchestra, robot, robotics, robots, selflearning, YuMi
All products recommended by Engadget are selected by our editorial team, independent of our parent company. Some of our stories include affiliate links. If you buy something through one of these links, we may earn an affiliate commission.