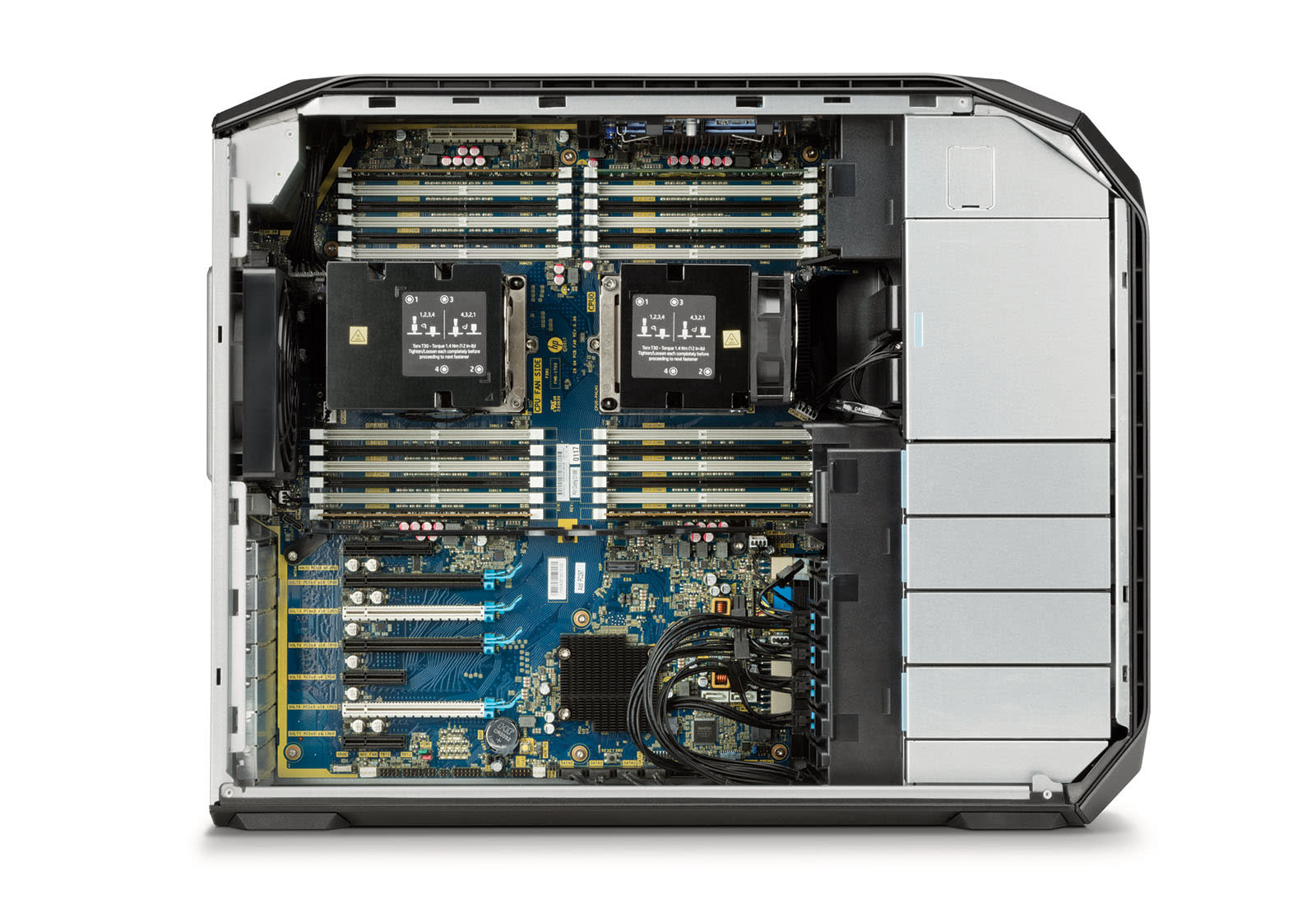 No matter how great your latest PC build is, HP's new Z Workstation lineup can probably top it. The company's latest Z8, Z6 and Z4 desktop workstations are its most powerful and ridiculously upgradeable ever, it says. The top-end Z8 features 24 RAM slots and up to 3TB of RAM, dual Xeon CPUs (with up to 56 cores), dual M.2 SSDs and dual NVIDIA Quadro Pro graphics cards. It's aimed squarely at VFX artists, letting them run 3D simulations, edit 8K video and do Nuke compositing, probably all at the same time.

Just to rattle off a few more specs (because there aren't many machines like this), it offers 10 USB 3.1 Gen 2 Type C ports, dual Gig-E ports, seven full-length, full height PCIe slots (nine total) and optional Thunderbolt 3. All of that is housed in a cleanly laid out, tool-free chassis with a 1,700 watt power supply and invective ducting.

Just buying the Z8 box without much inside will cost you $2,439, but if you want, say, a pair of the latest Xeon Platinum 8180M chips with 28 cores each and two of NVIDIA's 24GB P6000 Quadro graphics adapters, those items alone would run you a cool $35,000. Overall, the new machine boosts the memory, CPU core count, graphics and PCIe bandwidth capacity significantly across the board compared to its previous Z840 flagship model. The HP Z6 Workstation ($1,919) dials that craziness down a notch, with 384GB of max system memory and fewer slots and ports, but still has the dual Xeon CPU option. The Z4 Workstation ($1,239), meanwhile, lets you install 256GB of RAM and a single Xeon CPU, limited to Intel's new W-series. The top end of that right now is the Xeon W2155 with 10 cores and 20 threads, and HP hasn't said whether it'll support the flagship 18-core Xeon W that's coming later in the year.

HP also unveiled a few new displays, including the 38-inch Z38c curved display that is a bit of an odd duck for HP's video-oriented Z lineup. Much like LG's 38UC99 38-inch screen, it has sort-of 4K resolution (3,840 x 1,600) 21:9 that can't actually handle full-resolution UHD video, so seems more suited for gaming. It also lacks other features like 10-bit capability, which is becoming increasingly important for 4K HDR video editing and color correctoin.

HP's Z8 and Z6 Workstations are coming in October, while the Z4 arrives sometime in November. This end-of-year date should help film and VFX houses fit them into their fiscal purchase budgets, because other than the Z4, these aren't really meant for you or me.

In this article: gear, hp, NVIDIA, personal computing, personalcomputing, Quadro, Xeon, Z4, Z6, Z8, ZWorkstation
All products recommended by Engadget are selected by our editorial team, independent of our parent company. Some of our stories include affiliate links. If you buy something through one of these links, we may earn an affiliate commission.