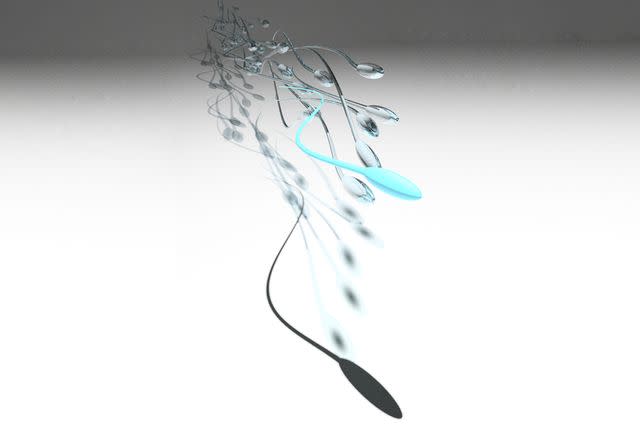 Scientists have developed a microscope that allows them to track sperm movements in 3D, which could benefit the understanding of both fertility treatment and micro-robotics. The device is made up of inexpensive components including LEDs and an image sensor -- like the one found in a mobile phone -- and uses holography and image reconstruction algorithms to precisely track the motion of sperm heads and tails.

Until now, surprisingly little has been known about sperm swimming patterns in 3D, as most conventional microscopes can only observe movement in 2D. Scientists already knew that sperm heads spin and tails ("flagellum") waver, but the microscope has now revealed intricate beating patterns that couldn't be identified before.

As well as shedding light on the attributes of both healthy and defective sperm -- which could bring important insight to fertility studies -- the microscope could also provide new understanding in the world of micro-robotics.

According to Aydogan Ozcan, professor of electrical and computer engineering and bioengineering at UCLA, where the microscope was developed: "Understanding the spin of the sperm head and beating patterns of the flagellum could help engineers design more advanced microscale robots that would mimic the way that sperms move and sense their environment." The practical applications of this aren't yet clear, but in theory, understanding the way sperm swim could provide a basis for nanobot guidance through the human body, a once-sci-fi sounding notion that is gaining increasing traction in mainstream medicine.

In this article: 3D, fertility, flagellum, medicine, microrobotics, microscope, nanobot, sperm, tomorrow, UCLA
All products recommended by Engadget are selected by our editorial team, independent of our parent company. Some of our stories include affiliate links. If you buy something through one of these links, we may earn an affiliate commission.