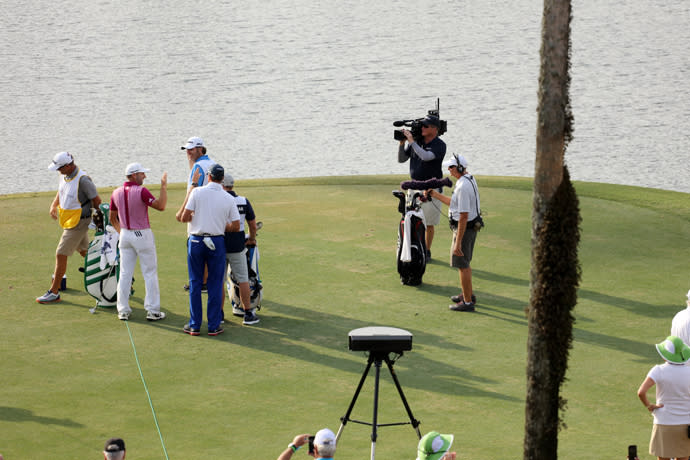 Intel has been powering virtual reality sports viewing for some time now. The chip maker has enabled VR for the Olympics, Major League Baseball and the National Football League, and has taken virtual reality to the golf course with the PGA. It's this last partnership in the news now, with Intel and the PGA Tour organization connecting to produce and distribute live VR and 360 video at six upcoming PGA events starting with the Tour Championship at East Lake Golf Club in Atlanta from September 21st to the 24th. It will continue VR coverage at the Presidents Cup at the Liberty National Golf Club in Jersey City from September 28th through October 1st.

Intel's True VR tech gives golf fans panoramic, steroscopic camera access to the competition, which allows for naturalistic and realistic views from any direction, something you can't even do on site. "From the Tour's perspective, our goal with VR is to create an experience that is completely different than what you can get as a fan at our events or by viewers of our traditional media platforms," said the PGA's Rick Anderson. The live VR events can be seen with Samsung Gear VR headsets via a PGA Tour VR Live app, which you can grab from the Oculus store. The 360-degree video will show up on Twitter and Periscope for those without a VR headset, and both types of coverage will focus on holes number one, 15 and 18 starting the 21st. Following VR coverage at the Presidents Cup includes views of the driving range and "fan chaos" from the opening holes, while the other tour events include the 2018 Waste Management Phoenix Open and the 2018 The Players, with more to be announced soon.

In this article: 360video, av, gear, golf, intel, inteltruevr, pga, pgatour, PGATourChampionship, PresidentsCup, virtualreality, vr
All products recommended by Engadget are selected by our editorial team, independent of our parent company. Some of our stories include affiliate links. If you buy something through one of these links, we may earn an affiliate commission.