How long could I go with just a watch and no phone? Not long enough.

The Apple Watch Series 3 started shipping today, and our definitive review is still in the works. In the meantime, we wanted to give you a taste of what life is like with the company's first LTE-connected watch, so when we got it in for review, we said eff it: let's use nothing but the Watch all day. I was going to respond to every text, email and Slack message from my wrist, use it for listening to music on the subway and talk into it as much as I would with my iPhone. To be fair, Apple doesn't seem like a huge advocate of this idea -- it treats the Series 3 as an occasional substitute for an iPhone rather than a day-to-day replacement. That said, this is the first Apple Watch with cellular connectivity. How could we not try this?

Ditching the phone takes a little time, though; you'll need an iPhone to complete the initial setup, which, thankfully, seemed much faster than on previous models. Well, until it came time to set up the cellular connection, anyway. I'm an AT&T customer, so this meant the Watch app kicked me into a browser window where I had to enable the carrier's $10-a-month NumberSync feature. For whatever reason, the process seemed to fail the first time, but a subsequent attempt let me pick up where I left off after logging in again. At last, with NumberSync ready and LTE ostensibly ready to go, I took a moment to behold the Watch itself.

At its launch event, Apple said the crystal housing for the heart rate sensor is just "two sheets of paper" thicker than last year's Series 2. The difference is subtle -- the crystal pressed into my wrist a little more noticeably than before, but not enough to get worked up over. The weight hasn't changed much, which is pretty impressive, considering the stuff Apple had to squeeze inside to make the cellular connections work.

The more I thought about it, the less sense the cellular Series 3's red dot makes. I'm told it serves no technical purpose; it's just there to add a fun little splash of color, and serve as a reminder that this watch can indeed make phone calls. Whether or not Apple intended it, the visual metaphor is apt: The dot looks like the red notification indicator that pops up on-screen, a subtle, persistent suggestion that the Series 3 is always connected to the rest of your world. That said, the dot straight-up clashes with certain Watch bands. Yeesh. 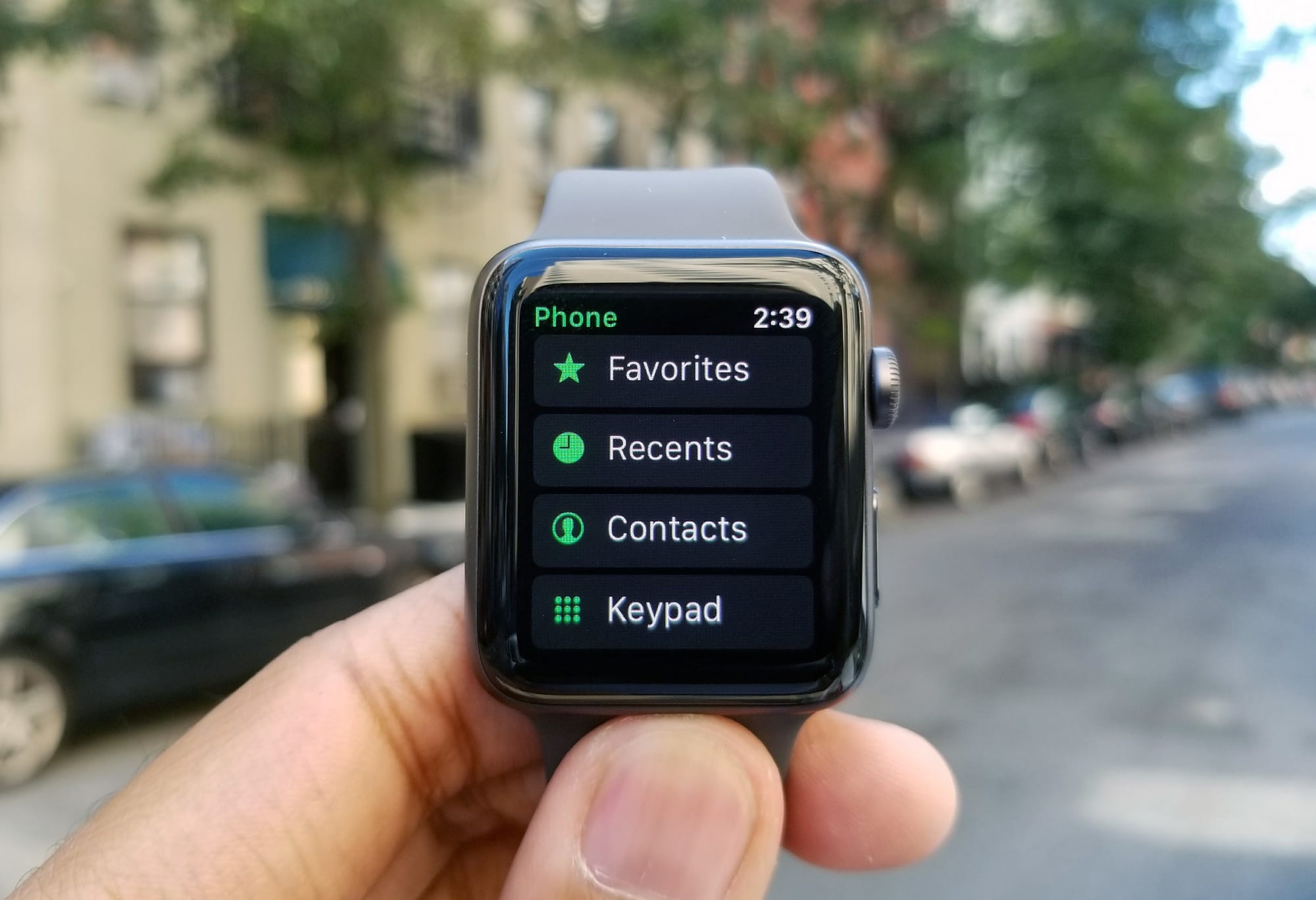 After that, it was time to actually use the thing. I killed Bluetooth on the iPhone and waited for about 10 seconds until the Watch transitioned to... WiFi. Oops. I'd need to be outside for the rest of this process. It took about 35 seconds for the Watch to acquire an LTE signal, and when messages started rolling in, I was honestly a little surprised by how easily I could manage them all. Unlike other reviewers, I haven't noticed any hiccups in network performance so far, but I'll keep my eyes peeled.

The constant throbbing of notifications rolling in gets old quickly, but so far, the excellent voice recognition was tremendous in helping me get back to everyone. I've always liked the idea of "scribbling" out letters with my finger to respond to incoming messages, but the process of figuring out what letter you've drawn takes just a tick more time. Voice recognition is the way to go, even if I looked like sort of a doofus using it.

Ditto for talking into the Watch, but at least it sounded pretty good, or so said the people I was chatting with. Of the four friends I called using the Watch, three of them had no idea I was talking into my wrist. Still, as far as the built-in speaker goes, you're going to want a decent set of Bluetooth earbuds to get the best audio quality on your end. I should also mention that I didn't notice the widely reported issue where the Series 3 tries to latch on to open WiFi networks it shouldn't. That's probably because I'm kind of anal about what WiFi network settings I actually keep saved on MacBook and iPhone; I generally clear out everything but my home and work configurations. I'm going to be a little more lax about this, though, and see what happens from there. Moving on. 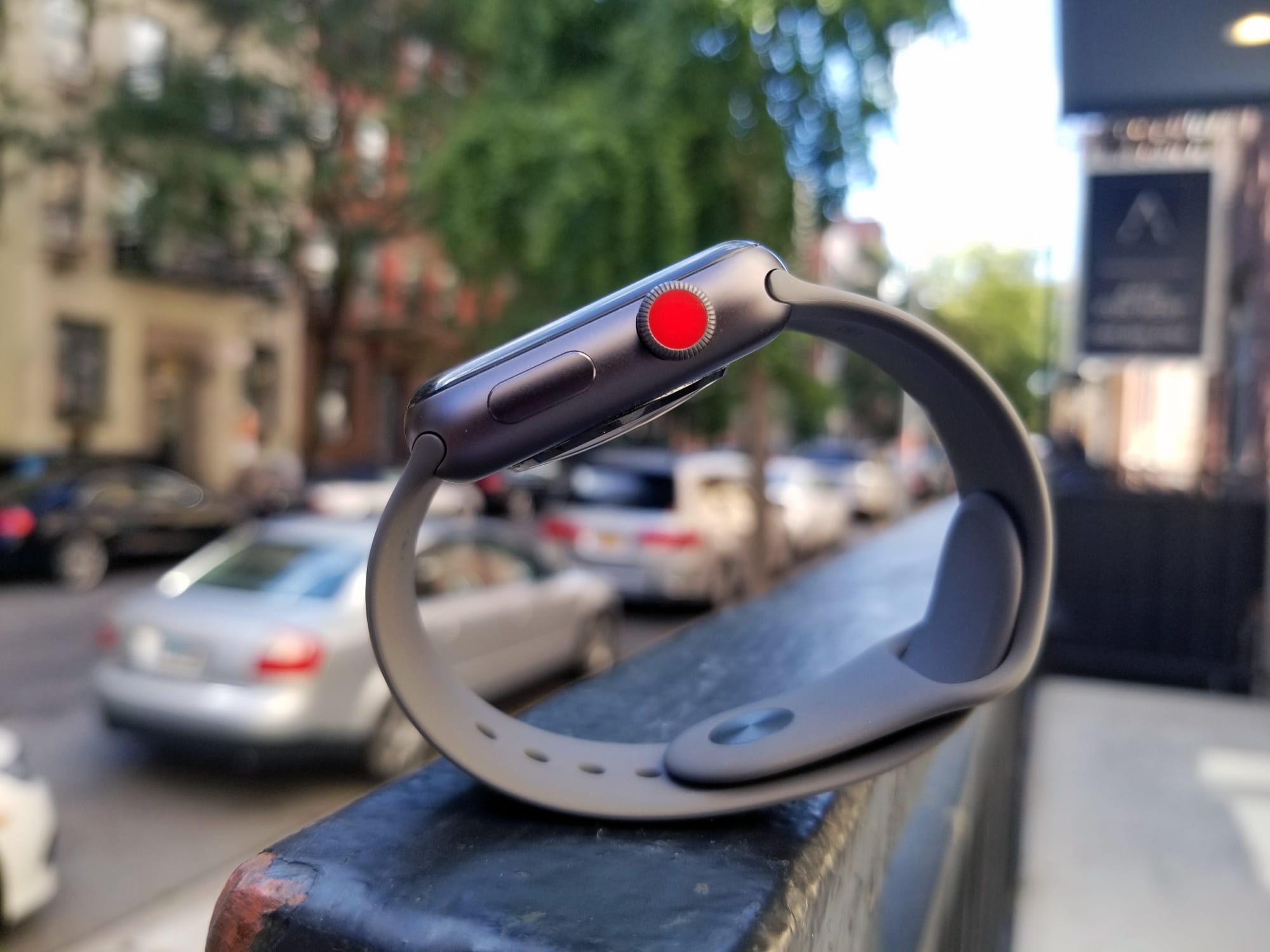 Using Siri was also a pleasant surprise -- it typically gets a bad rap, but my experience so far has been great. It very quickly got to the point where I could ditch the precise pronunciation I reserve for virtual assistants and just talk like myself. There was one moment when I was walking around downtown Manhattan and Siri failed to connect, but she's otherwise turning out to be the Series 3's MVP. The other contender for that title is the updated chipset inside; it makes the Series 3 much more capable. Switching between apps (accessible using the flat side button) was the smoothest experience I've had yet on an Apple Watch.

I kept up with work for about four hours, and while my co-workers could probably tell I wasn't quite as responsive as usual, I was still managing to get things done. It was getting pretty late at this point, so I decided to wind down my night with a leisurely run along the East River, using the GPS to track my route. The Watch seemed to do a fine job here, except that it basically obliterated what was left of my battery life. After six hours, the Watch was down to 10 percent and dipped into Power Reserve mode.

So far, the Series 3 has been a mixed bag. The big performance gains mean it's much more pleasant to actually use, but most people don't need what amounts to a second, more limited phone lashed to their wrists. I'm going to keep testing the Series 3 for a few more days, so stay tuned for our full review.

All products recommended by Engadget are selected by our editorial team, independent of our parent company. Some of our stories include affiliate links. If you buy something through one of these links, we may earn an affiliate commission. All prices are correct at the time of publishing.
Apple Watch Series 3 first look: So far, no LTE problems
apple
applewatch
applewatchseries3
gear
handson
impressions
preview
series3
siri
watch
watchos4
wearables