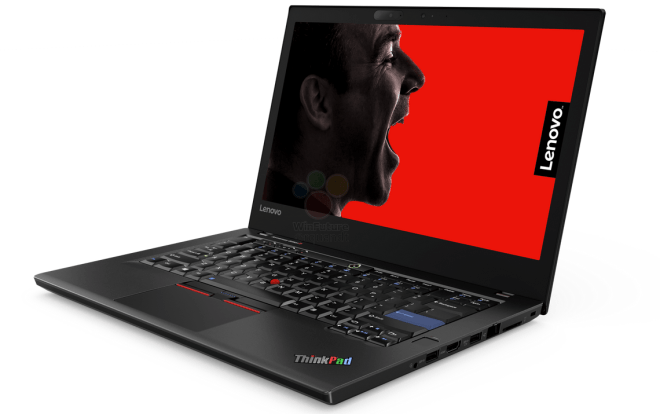 The latest ThinkPad that Lenovo brought to CES back in January had a notably sleeker, more modern appearance than the line's traditional boxy black look. But it kept a couple features, like the red TrackPoint nub and 45-degree ThinkPad logo, that have become trademarks of the beloved brand since it debuted under IBM back in October 1992. But WinFuture reports that a leak revealed Lenovo is releasing a 25th-anniversary retro version that mimics the look of the first ThinkPad laptops that reached consumers.

According to the leak, the allegedly-named ThinkPad 25 has visual touches from its ancestor (like a multicolored logo and blue 'Enter' key) but will otherwise be based on the ThinkPad 470 series. Its tech specs are pretty standard for midline laptops: A 14-inch IPS display, Intel Core i7 processor, 16GB of RAM, 512GB of SSD storage and a NVIDIA GTE 940MX GPU. It has all your modern ports, too: A Thunderbolt-rated USB-C, three standard USB, an SD slot, HDMI and even an Ethernet port. Rounding out its modern tech is a fingerprint scanner and infrared webcam for facial recognition.

As The Verge points out, this anniversary edition looks a lot like the retro-classic ThinkPad concept that Lenovo VP of design David Hill mentioned a couple years ago. Given that the initial consumer-facing ThinkPads were introduced 25 years ago next month, this model might be announced in October, assuming the info is accurate.

In this article: anniversary, gear, lenovo, personal computing, personalcomputing, retro, thinkpad, ThinkPad25
All products recommended by Engadget are selected by our editorial team, independent of our parent company. Some of our stories include affiliate links. If you buy something through one of these links, we may earn an affiliate commission.