With its cannon and claw accessories, last year's Mambo drone from Parrot was more a toy than a photography tool. The latest version of the mini drone looks to be at least more fun, if not more useful, than its predecessor. The Mambo FPV comes with a camera attachment and a headset, so you can stream what the tiny flyer is seeing right into your eyes. Last year's Mambo came with a cannon that shoots six pellets up to six feet and a "Grabber" claw that picks up very small objects weighing up to four ounces. The new version isn't physically different -- it just comes with different accessories (the older ones are also compatible). Parrot increased the wireless range between the Bluetooth controller and the drone so you can now fly it up to 100 meters (330 feet) away, up from 60 meters before.

I didn't get to fly the Mambo FPV myself, but I did check out the video it was streaming to an iPhone. Better yet, I stuck the phone in Parrot's included goggles that the company (unfortunately) named Cockpitglasses 2. The camera records video to an onboard microSD card in 720p, but broadcasts to the phone in VGA (640 x 480). 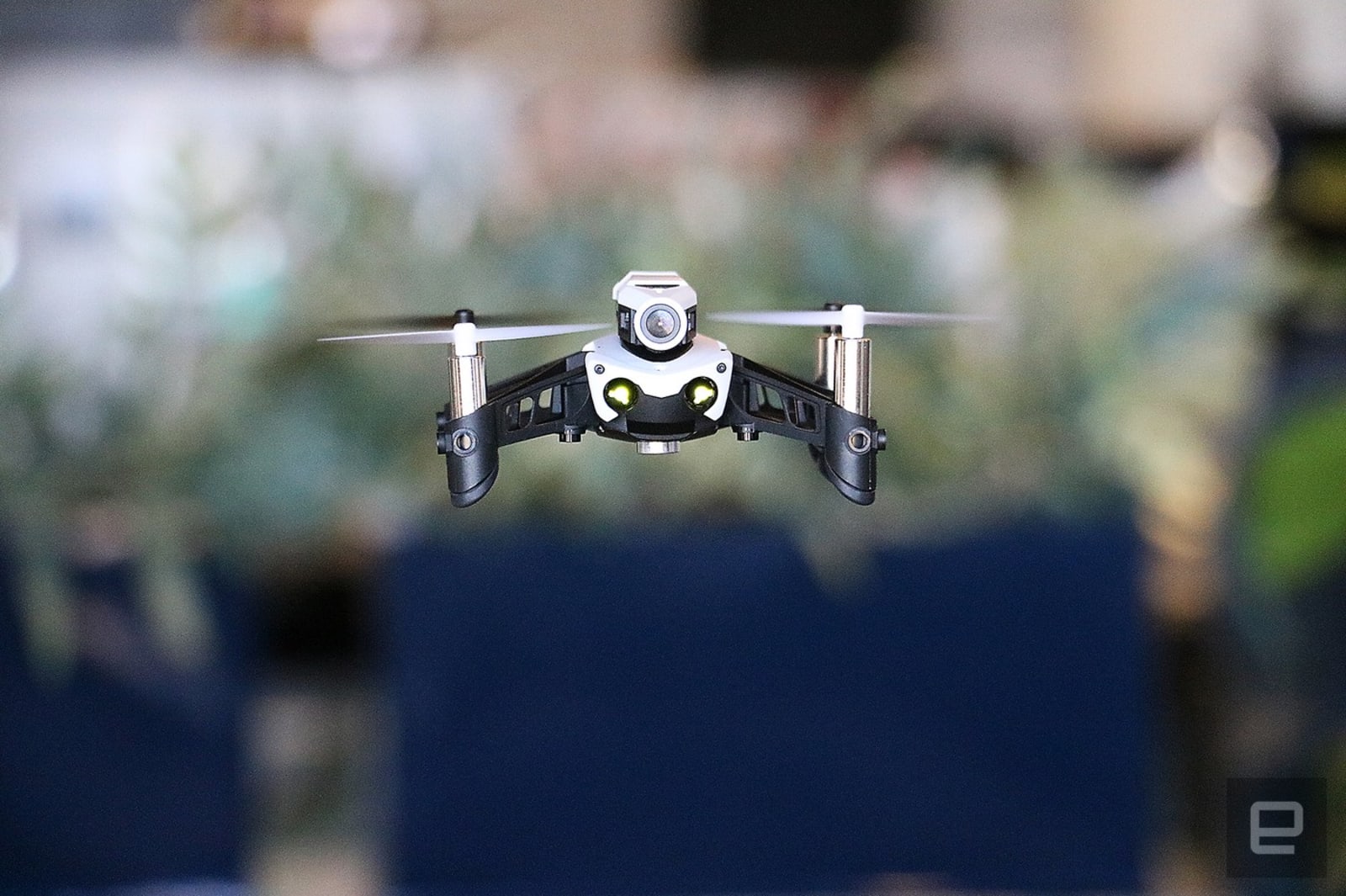 The live footage I saw was somewhat pixelated, partly because of the VGA resolution, but also likely due to the WiFi connection between the camera and the phone. The HD clips that we got off the Mambo's onboard microSD card were slightly better in resolution, and had trouble exposing for the harsh sunlight streaming in through our office windows, but its quality is fine overall. (Check out our video above for some samples.) Thanks to Parrot's digital stabilizing technology (similar to the Bebop, although we can't say if it's the exact same), the video I watched was steady enough to keep me from feeling nauseated.

It's not good enough to make high-quality movies with, but the Mambo FPV provides decent footage for those who want to get a bird's eye view of special events like weddings or family gatherings. That makes it slightly more useful than its predecessors, which were primarily designed for fun. The first-person perspective stream and Cockpitglasses also make flying the drone easier, since you're always facing forward and know which direction to turn. 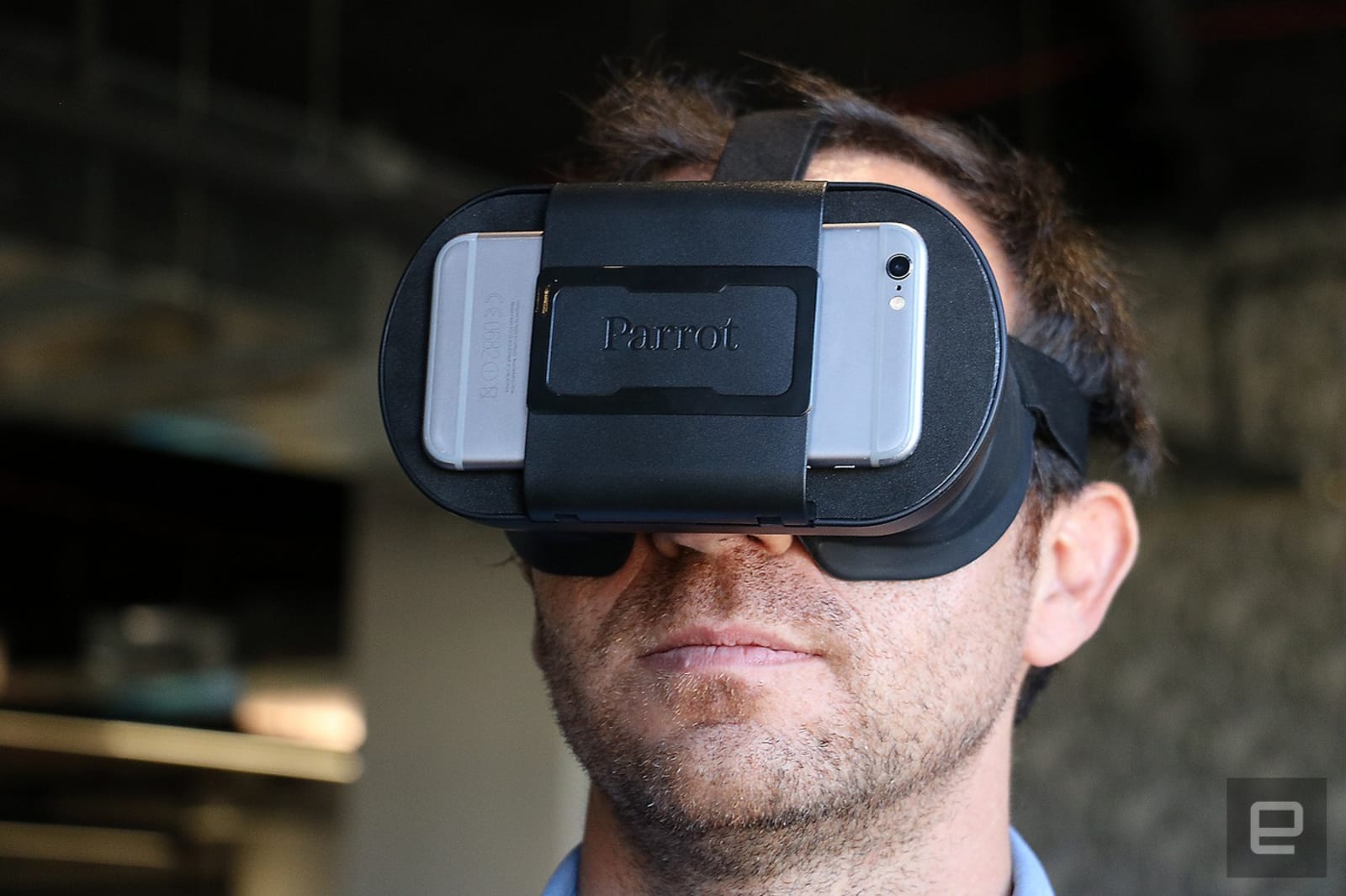 The Mambo FPV comes with three new flight modes: Easy (labelled Normal in the app), which stabilizes both horizontal and vertical movement; Drift, which only stabilizes vertical flight for tighter turns and Race, which does not stabilize in either direction. Unfortunately, as I didn't get to fly the drone, I couldn't tell how easy it was to pilot the Mambo with any of these settings. Those who already own a Mambo drone can, in theory, try these modes for themselves once they roll out via a software update. Unfortunately, since you can't buy the camera module separately just yet, you'll either have to shell out for a whole new drone or wait till Parrot sells that accessory on its own.

At 2.2 ounces, the Mambo FPV fits comfortably in my hand, and takes off from there, too. A company rep started the Mambo from his phone, and I gently threw it in the air. The harder I threw the device, the further it fell back towards the ground before regaining composure and rising back up. I couldn't quite tell if this was because of the Parrot rep's expertise in flying or if there was technology built in to make that launch smooth, but it was definitely impressive. The Mambo also took off easily from two meeting tables during our demo.

After about 10 minutes of flying and stopping, the drone's LEDs started flashing red to indicate its battery was running low. Parrot says the Mambo FPV can last up to 10 minutes of continuous flight (eight minutes if the camera is streaming), which is a three minute increase over last year's model, and pretty good for a drone of this size. 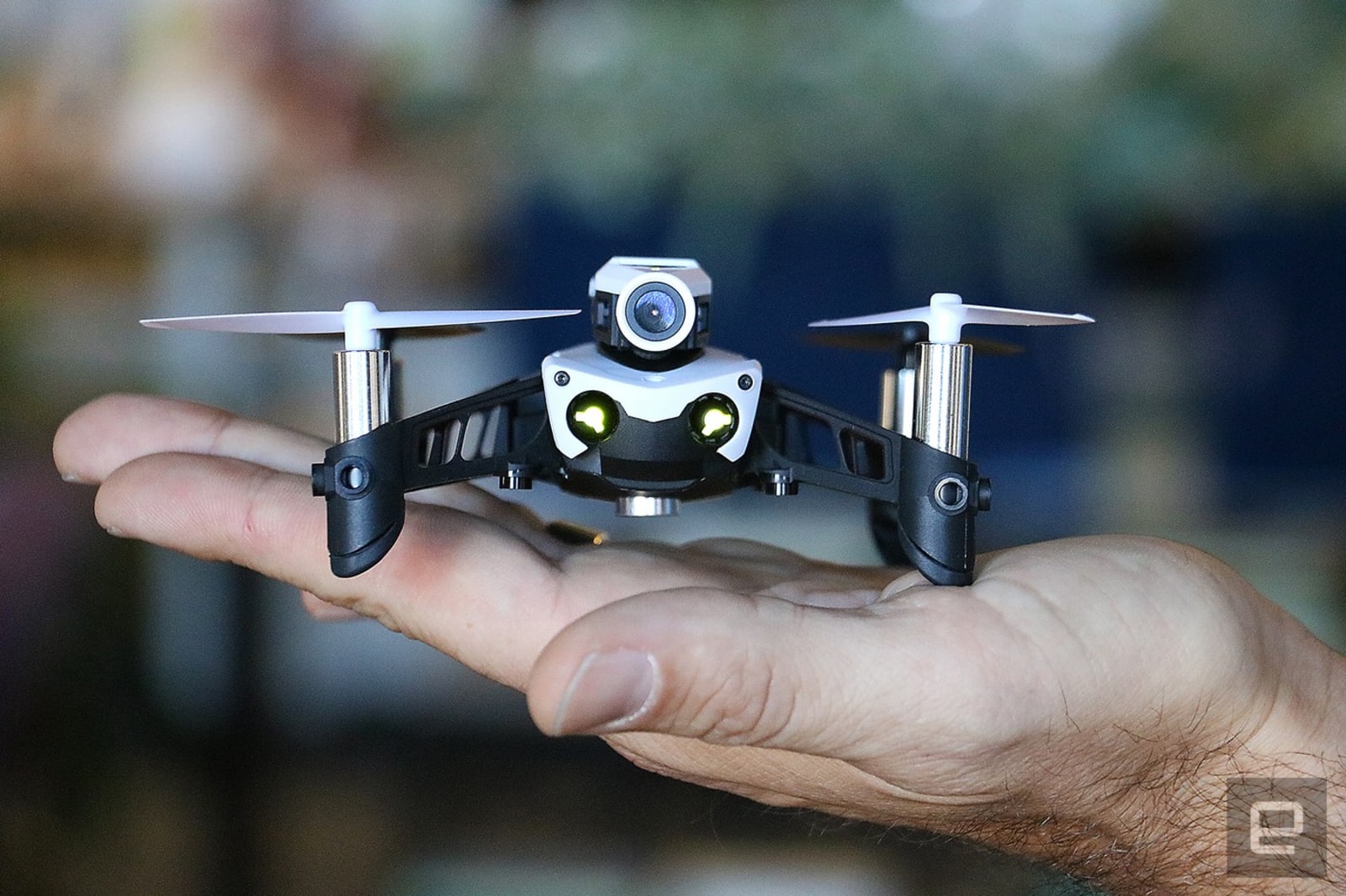 The new model means Mambo is available in three different configurations -- the FPV kit includes the drone, goggles, controller, camera module and propeller guards for $180. The other two bundles are last year's Mission ($160) and the Fly ($110), with the latter containing just the drone and guards.

Parrot hasn't mentioned if it will eventually sell the camera module on its own so existing owners of a Mambo can simply buy that to upgrade, but for now you'll have to get the FPV bundle to get the camera. If you want a cheaper alternative and don't mind making do without image stabilization built in, the Nano QX2 FPV drone ($100) offers similar video quality and also streams live to a headset. You'll need to buy pricier FPV goggles for that feature, though. 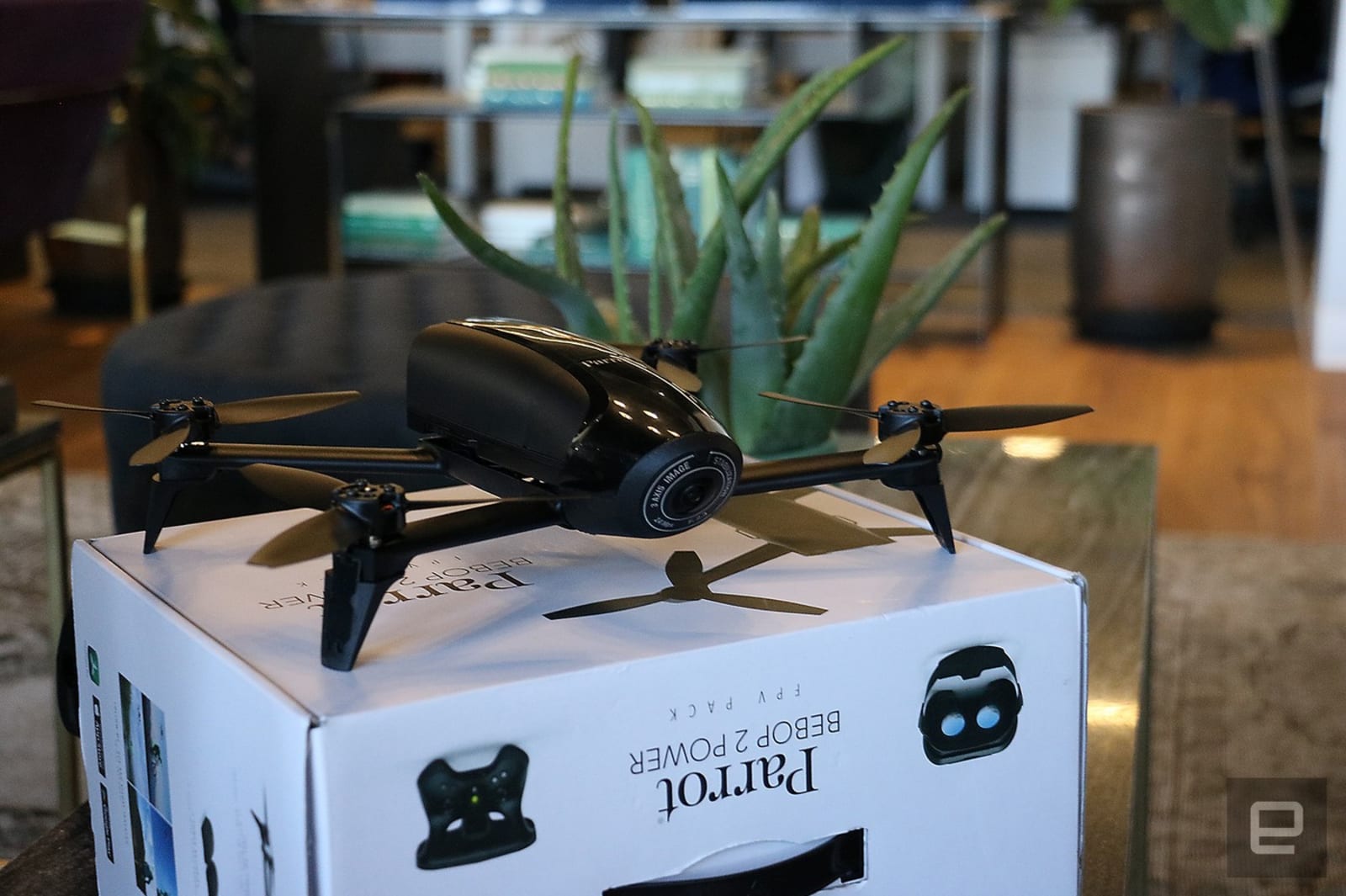 We also got a brief look at the new Bebop 2 Power, which is the third generation of the company's flagship drone. The new iteration comes with two battery packs in the box instead of one, so you have a bit more flying time out of the box. Each battery now lasts 30 minutes -- five minutes longer than before, putting Bebop up there with the DJI Mavic Pro in terms of longevity.

The Bebop 2 Power has a full HD camera with a fisheye lens that sees 180 degrees horizontally and vertically; you select the 90-degree portion you want via the flight app. This way, Parrot doesn't need a gimbal or mechanical parts to move the camera's view -- and it keeps the drone lightweight and relatively compact. Though a full gimbal typically provides better stability and image quality.

The Bebop 2 Power ($599) is also powerful enough to reach up to 65 kilometers per hour (40 mph) in flight. The companion app has also been updated with new modes to make aerial filmmaking easier. The Magic Dronies mode will recognize things like humans or vehicles and make the Bebop 2 Power circle your subject while you're recording. There's also a new Autoshot mode for landscape videography that makes the drone to move in a preset pattern (like a slow reveal from a low angle to a wide shot) with a single tap on your phone.

As much as I was itching to try these new features, we couldn't fly the Bebop 2 Power indoors during our meeting or outside without knowing where exactly we were permitted to fly drones in New York. Until we can test the Bebop 2 Power for ourselves, it's hard to tell how effective Parrot's software will be. But based on some preview footage the company's rep showed us, the Bebop 2 Power's camera should make for some stunning panoramas or high-quality selfie videos for those not looking to spend the extra cash for the likes of DJI's Phantom or Mavic.

In this article: drone, drones, gadgetry, gadgets, gear, parrot, parrotbebop2power, parrotmambo, parrotmambofpv, uav
All products recommended by Engadget are selected by our editorial team, independent of our parent company. Some of our stories include affiliate links. If you buy something through one of these links, we may earn an affiliate commission.