The Grow connected planter is the ultimate no-fuss gardening kit

Everything needed to grow the perfect salad in one package, controlled by an app.
K. Naudus|10.03.17
@krisnaudus

Horticulturalists looking to go high-tech will find no shortage of smart sensors to stick in their soil, sending data to their phones on particulars like water level, temperature and soil pH. However, even systems that hold your hand as much as possible still make a few assumptions -- namely, that you already have a garden. After all, no budding gardener is really going to make a set of sensors their first purchase. More likely, they'll buy plants, dirt and a pot and then have no idea what to do next. The new Grow Duo offers something a lot less piecemeal: Drop your $200 on the company's site, and get a connected planter, soil and even the seeds. It's everything you need to jumpstart your gardening ambitions within minutes.

Grow wouldn't be the first connected gardening product that claims to sell you everything you need; last year the SproutsIO microgarden promised to sell you seeds and a pot that would let you grow your own herbs and vegetables hydroponically. But that's an indoor system, and it's also a lot more expensive. Grow is for people who have access to some kind of outdoor space like a roof, deck or small garden, and don't have the time or expertise to cultivate and manage it. I used to live in a house with flowers and a small vegetable garden and yes, it's a lot more work than dealing with some potted indoor plants. Temperature becomes a bigger concern, as does pest control.

Each Grow Duo is a little over two feet wide, a foot deep and 16 inches tall. The plastic container is light enough to pick up and move around, even when it's filled with soil. Hopefully you won't have to shift the Duo around too often, though, given that it needs to be connected to a hose so the planter can water itself. But still, that flexibility will come in handy if you plant something that requires a bit more (or less) sun and needs to be relocated. 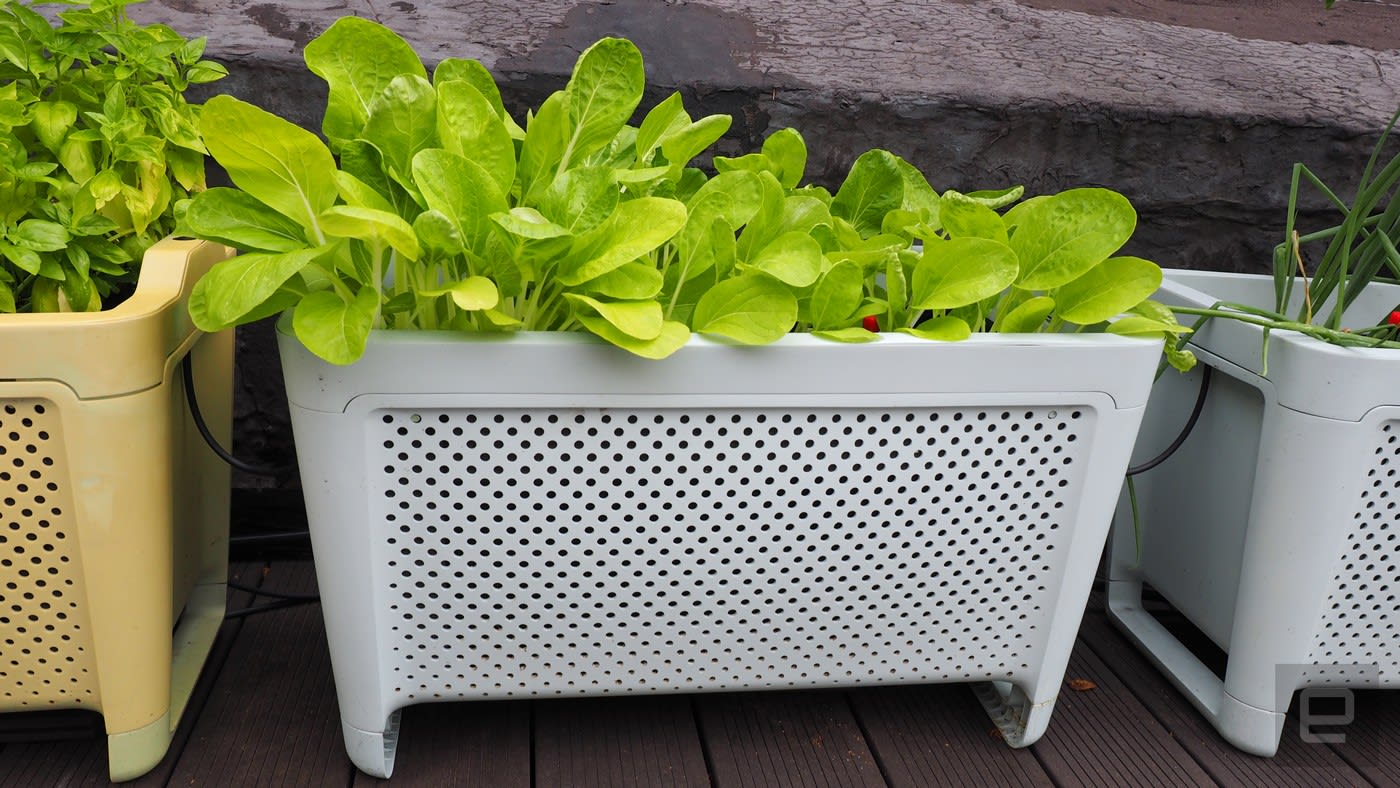 A big part of Grow's system is being aware of things like light levels and temperature, and the Duo will monitor those along with the water levels and humidity. Thanks to the app it's also generally aware of the local climate so you won't try to grow something seasonally inappropriate. For example, in colder climes tomatoes should be grown as soon as possible after last frost, while root vegetables can endure at least two harvests.

The Grow app will feed you all this information, gathering the latest data from the planter via Bluetooth Low Energy. This keeps the power draw of the planter rather miniscule: Each Grow device is powered by two AA batteries, which last about a year. The planter will sync with your device every time you're in range. The downside is that you can't check on the planters from afar, like when you go on vacation. But Grow will at least make sure they're properly watered while you're gone, so you don't have to rely on flaky friends or relatives to keep an eye on your kale. 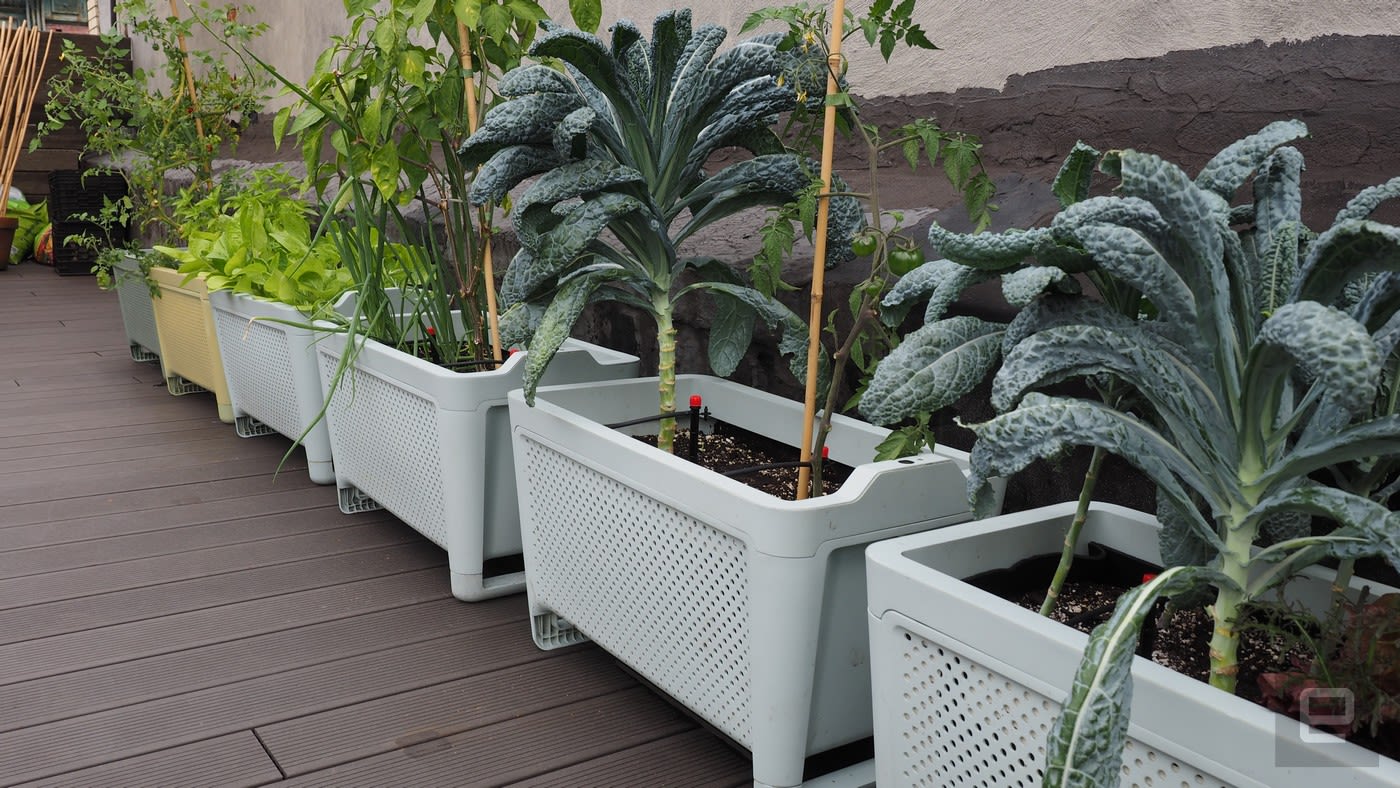 While multiple units can be daisy-chained together for watering purposes, each Duo is a self-contained system when it comes to gathering data and monitoring its crops. The planters can accommodate the equivalent of two Grow seed packets at a time. Each packet contains a biodegradable sheet embedded with seeds, positioned according to how much space is needed for the grown plants.

You can mix and match different crops; the app will make suggestions on what to grow but ultimately it's your choice. The system will warn you when two crops are incompatible and shouldn't be planted together, as well as other advice throughout the season. The app also makes it easy to reorder soil and seeds from Grow as needed, though you always have the option of picking up your own materials as you become more comfortable with gardening. However, Grow would rather you use the soil sent with each planter since the watering system is designed with that proprietary mix in mind. As for the seed kits, they run between $6 and $20, while packets at your local Home Depot usually cost less than $3. You're definitely paying a premium for the convenience. 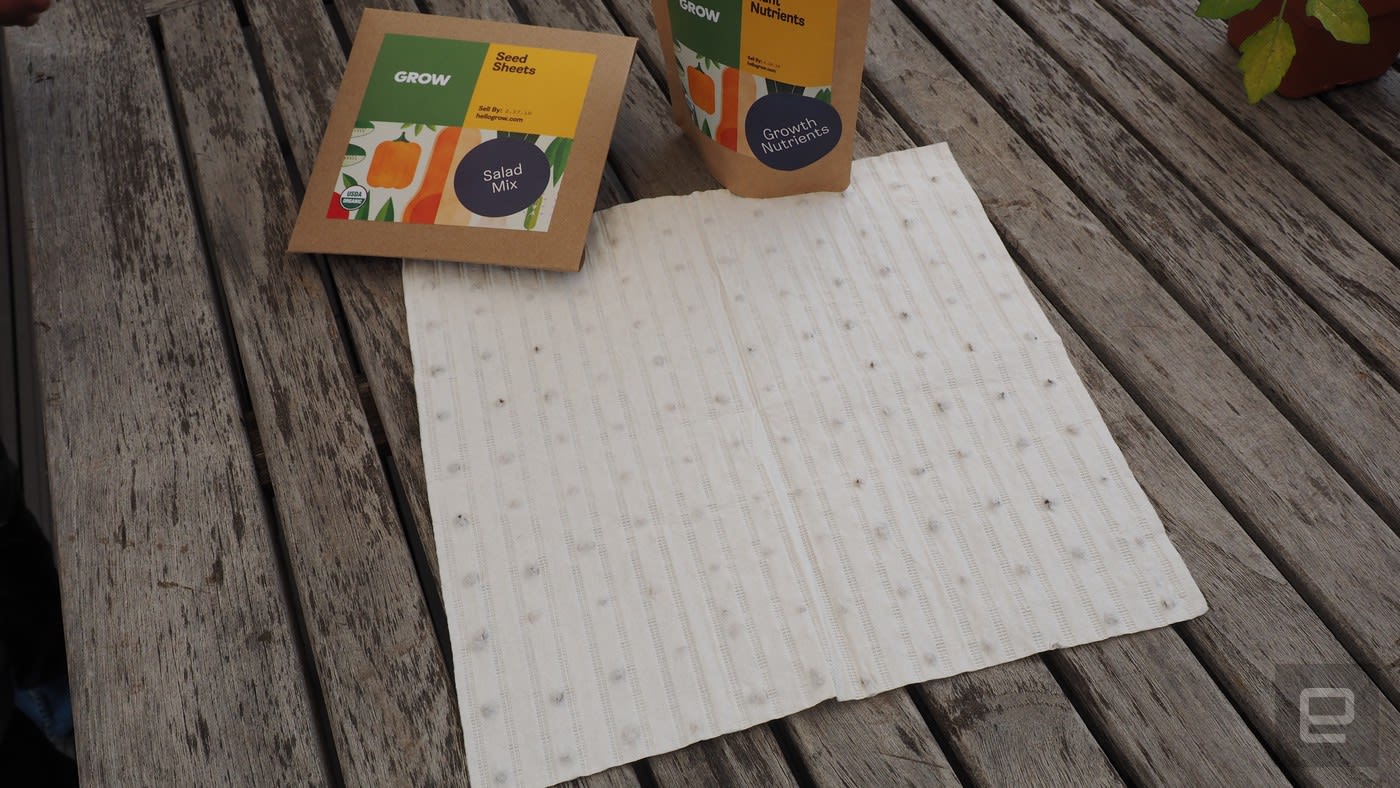 The seed kits span a range of edible greenery, from herbs and leafy greens for salad to more substantial fruits and vegetables like berries, cucumbers and eggplant. When there isn't enough time left in the season for a full crop to mature, Grow will offer seedlings give you a headstart The app will recommend the best plants for your particular climate but doesn't limit you to local produce: Grow CEO Idan Cohen mentioned there were certain greens from Israel that he missed and couldn't find in the United States. Grow plans to offer its customers a diverse selection of seeds, making them a lot easier to care for while still keeping your environment in mind.

The Grow Duo is available for pre-order now, with early bird buyers able to snag one for $199, discounted from the retail price of $249. That includes a $20 credit for buying your first few plant kits. If October seems a little late to start gardening, the Duo isn't actually set to begin shipping until January 2018, giving you plenty of time to get ready for spring.