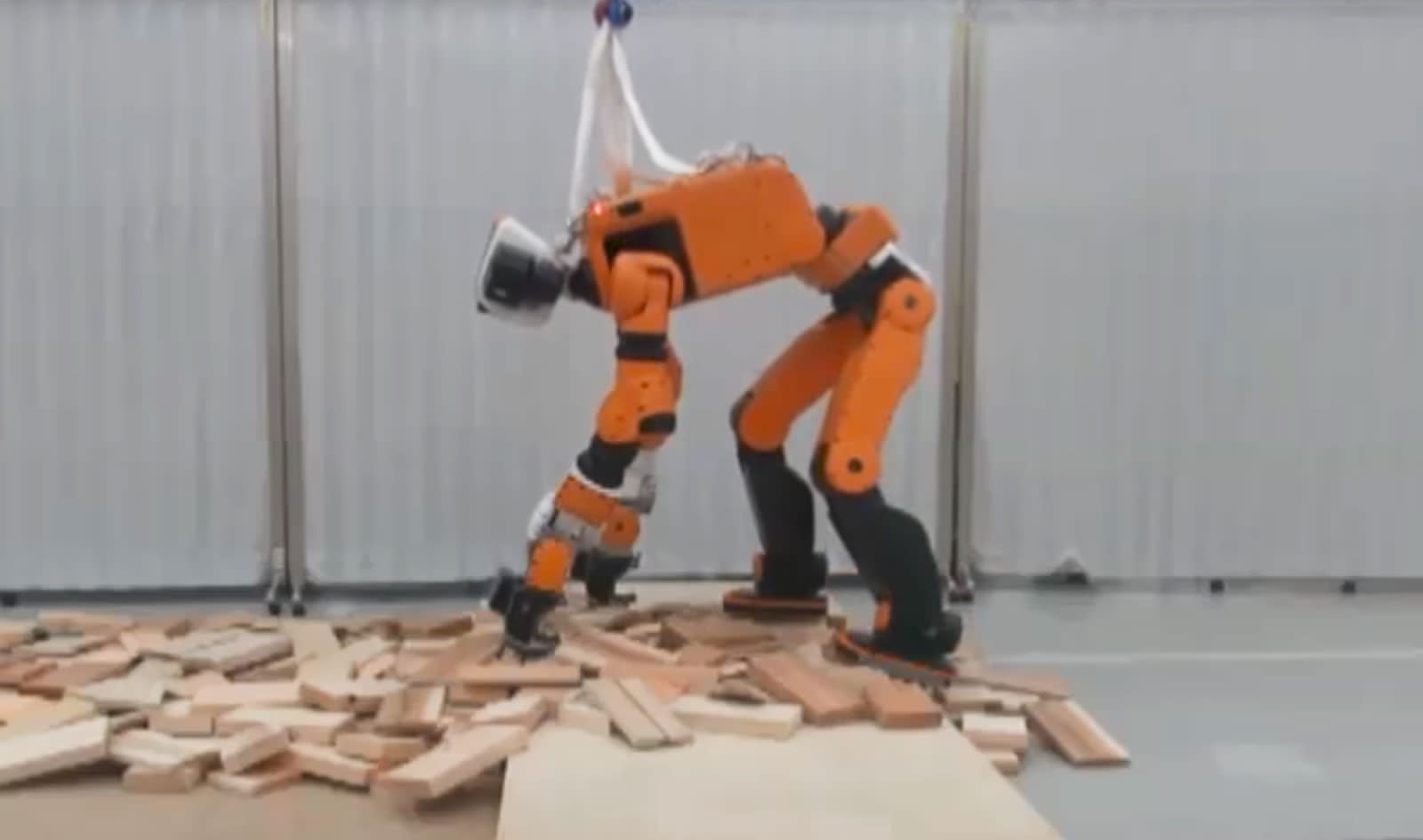 The disaster response team of the future could be made up of an army of cheery orange robots, according to Honda. The company has unveiled a working prototype of its E2-DR disaster response robot -- first revealed in an R&D paper in 2015 -- and it can do a lot. At 1.68 meters high and weighing in at 85 kilograms, E2-DR can walk, step over objects, climb stairs and ladders, slink through narrow spaces and traverse piles of debris. It can even tolerate rain for 20 straight minutes, which is more than a lot of actual people can.

To keep E2-DR's size and weight to a minimum, Honda swapped out traditional cables for rigorously-tested optical fibers. It's powered by a 1000-Wh lithium-ion battery which provides 90 minutes of juice, plus an Intel Core-i7 CPU, and is kept cool by air ducts and internal fans within its torso. All of its joints are fashioned in a labyrinth structure, keeping contaminants at bay. Its hands are equipped with cameras and 3D sensors, but they're only designed for basic gripping and to help it move around, as Honda envisions the robot interacting with the world via special tools and wireless communication.

In short, it's not a million miles away from the humanoid robots long promised by science fiction (apart from the intelligence aspect, of course. At this very early juncture E2-DR will be entirely teleoperated, but who knows what will happen in the future -- its predecessor Asimo already boasts a lot of autonomy). Honda has stressed that E2-DR is just a prototype at the moment and that it has a lot of work to do before it can be useful. For example, fall testing is notably missing from the research -- while Honda notes the robot can stand up after being knocked down, it's not clear just how structurally durable it is. However, the overall scale of the project is a closely guarded company secret, which means there are probably very big things in the works.

In this article: Asimo, autonomous, DisasterResponse, E2DR, Honda, humanoid, lithiumion, robot, robotics, robots, hidden:vv_09x16:b17b3be4-42c1-3f0d-a509-8c1482381d26, hidden:vv_16x09:c8723c86-d70c-30f4-ad3b-f9dc1dd1ac9a
All products recommended by Engadget are selected by our editorial team, independent of our parent company. Some of our stories include affiliate links. If you buy something through one of these links, we may earn an affiliate commission.