Everything else is incremental.
C. Low|10.04.17
@cherlynnlow

In recent years, laptop makers focused on squeezing longer-lasting batteries and incrementally better performance into thinner, lighter and more attractive bodies. Those improvements are beneficial, but on the whole it feels like the industry is having trouble coming up with new features that are truly helpful. That's why HP's latest mainstream laptop feels refreshing. In addition to the usual performance bumps and smaller footprint, it offers a built-in privacy shield that you can toggle with a dedicated key -- something its competitors haven't offered (or copied) yet. I checked out a pre-production unit of the new Spectre x360 13 at a recent demo in New York and want one just for the protective screen.

HP introduced the "Sure View" privacy screen in its Elitebook line of commercial laptops last year. The Elitebook series is aimed at business users who want to protect, say, confidential presentations on the go, and it made sense to offer Sure View to them first. But the rest of us deal with sensitive info as well, so it's nice to see the company bring this to its mainstream line.

You can toggle the privacy screen by pressing a button on the keyboard's function row where the F2 key usually sits. This hides your content from people in your vicinity by making the display look completely white unless you're directly in front of it. During my demo, the Spectre x360's screen looked like a blank white canvas when I stood at an extreme angle from it. When I moved closer to the center, though, I could make out colors and shapes like the green header row of an Excel spreadsheet. But it was only when I faced the computer head on that I could see the actual words on the screen. 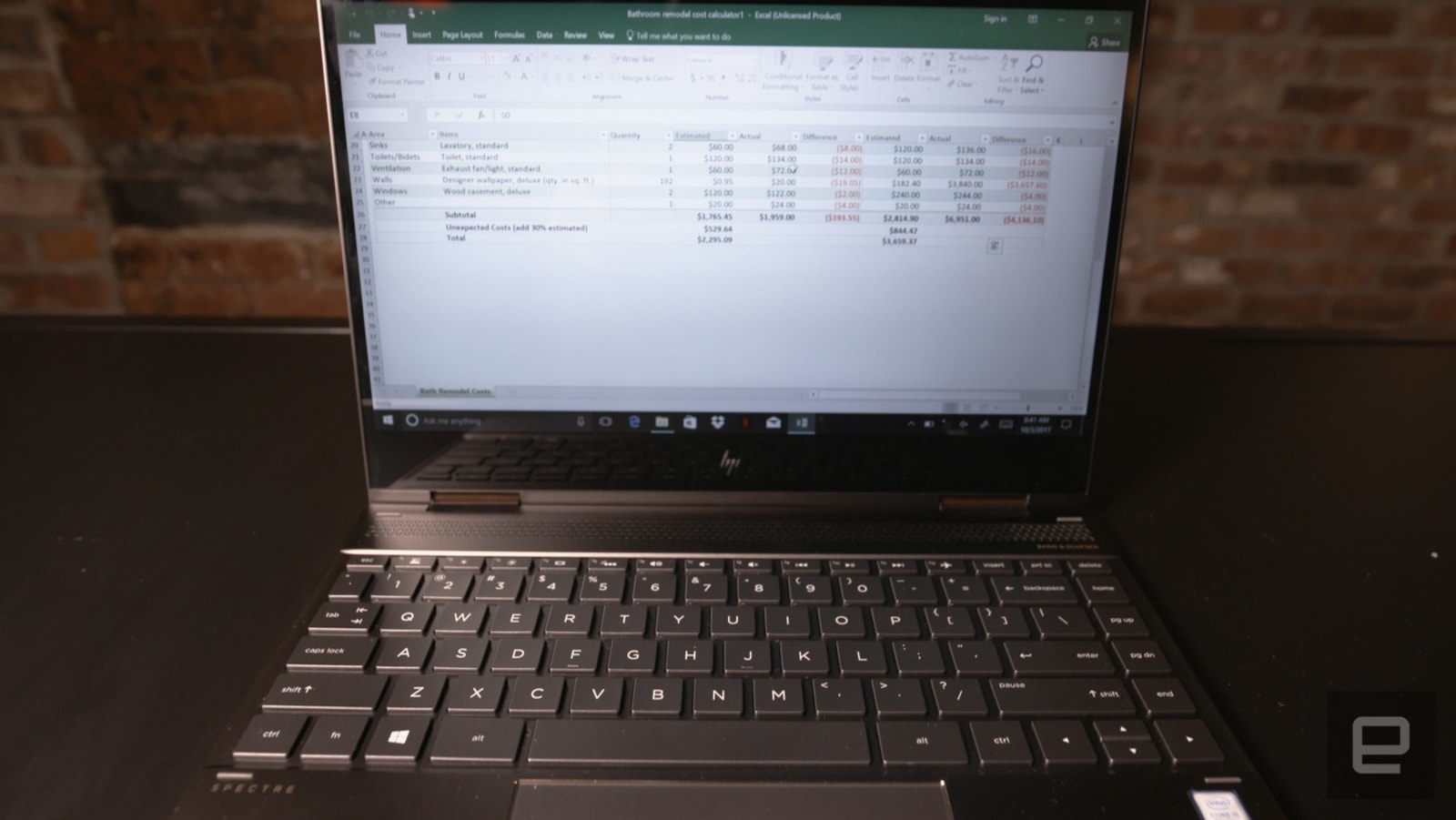 Frankly, the text on our demo unit was so small that I probably couldn't read what it said unless I was up close, either. Still, having the privacy screen can provide some extra peace of mind, and the dedicated button toggle is convenient, too. I've lost track of how many times I've anxiously looked over my shoulder to make sure no one was glancing at my screen when I worked on confidential stories or entering my credit card information at an airport or a press conference.

The Sure View upgrade will cost you an additional $100, which, considering third-party privacy shields cost about $30, seems a bit steep. But you'll get the convenience of switching it on and off whenever you want without having to deal with flimsy attachments that could lose their stickiness (or magnetism) over time.

As with most laptops being updated for the holiday season, the new Spectre x360 13 will come equipped with 8th-generation Intel chipsets (Core i5 and i7 options), specifically the U series that now packs four cores instead of just two. HP said that in addition to performance improvements, this infrastructure should also extend battery life, and the company estimates the 4K-version of the laptop will last up to 16.5 hours. The Spectre x360 also gained a fingerprint sensor along the right edge of the laptop for convenient identity verification, but it requires a bit of searching to find. You'll still have the IR camera above the screen for Windows Hello logins, though. Oh, and the device's 13.3-inch screen got bumped up from full HD resolution to 4K. 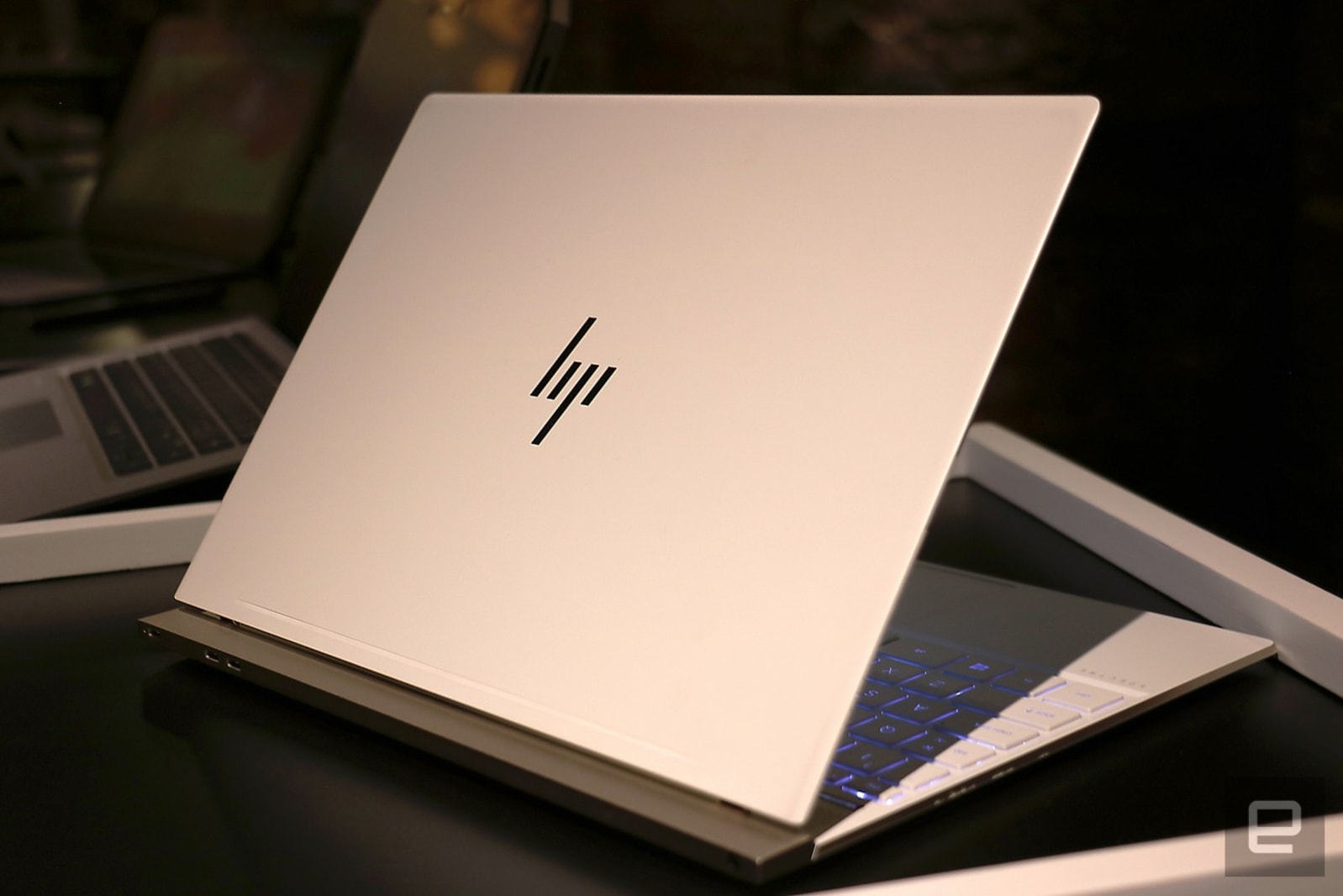 HP also unveiled the new Spectre 13 laptop, which features CPU and battery improvements while retaining the same svelte 10.4mm profile as its predecessor. In fact, this year's Spectre 13 is actually slightly smaller than its older brother, since HP managed to narrow down the display bezels and get rid of the space around the keyboard. The touchpad is wider, with an aspect ratio that's closer to the screen's for more intuitive navigation. The company finally added touchscreens on some configurations (only non-touch before) and display resolutions now go up to 4K. Plus, there's a new "Ceramic White" color option for those who wanted an alternative to existing the grey/copper version, and I'd have a hard time picking one since both models are equally attractive.

The Spectre laptop and the Spectre x360 13 start at $1,300 and $1,150 respectively, and will be available in stores on October 29th. If you already know for sure that you want one, you can also pre-order it on Best Buy's website, although I would caution you to wait until we get to check out a production-ready unit before you splurge.

Update: Clarified that the 16.5-hour battery life estimate for the Spectre x360 13 is for the 4K model. The full HD configuration gets about 15 minutes more endurance.