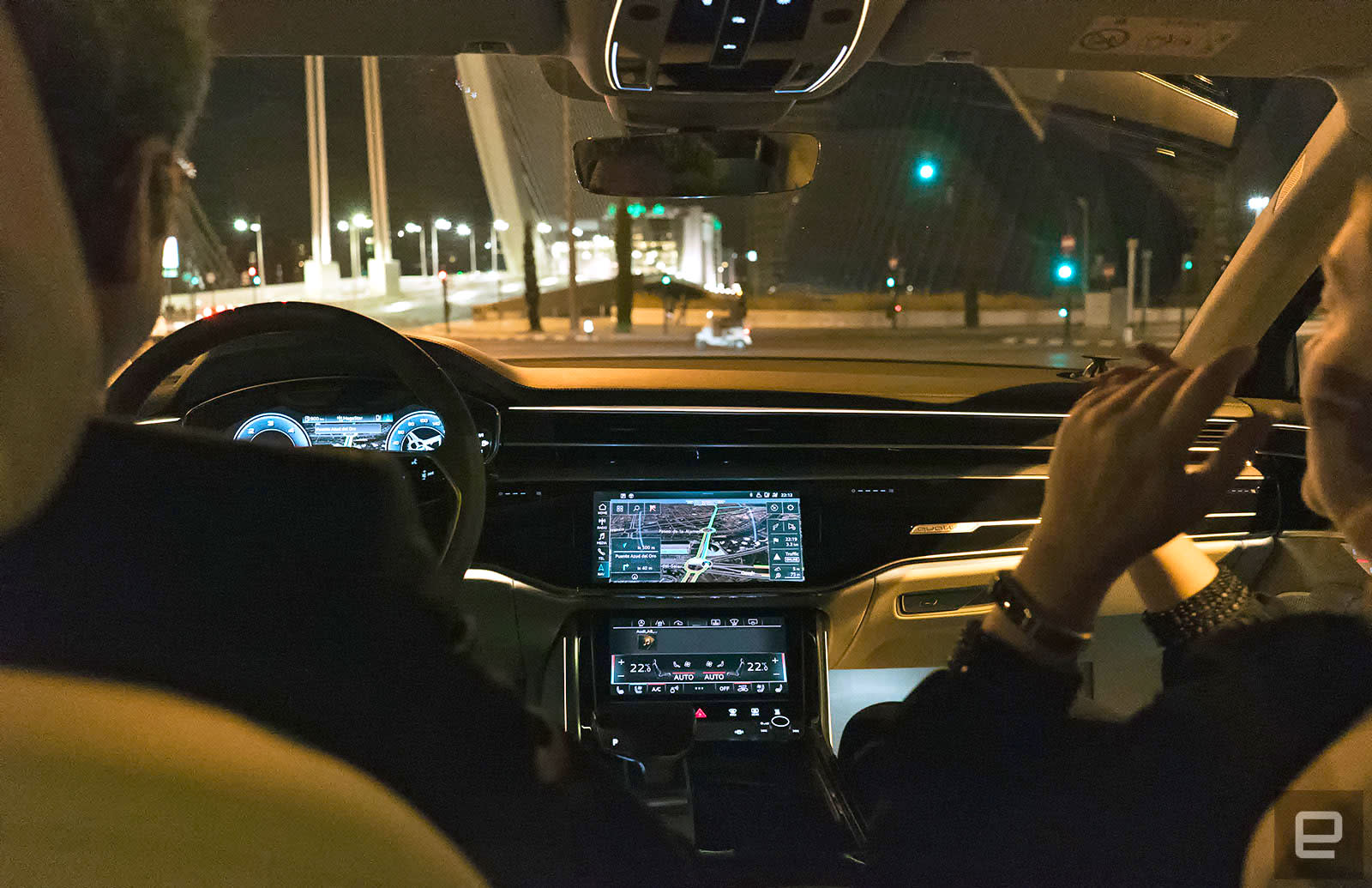 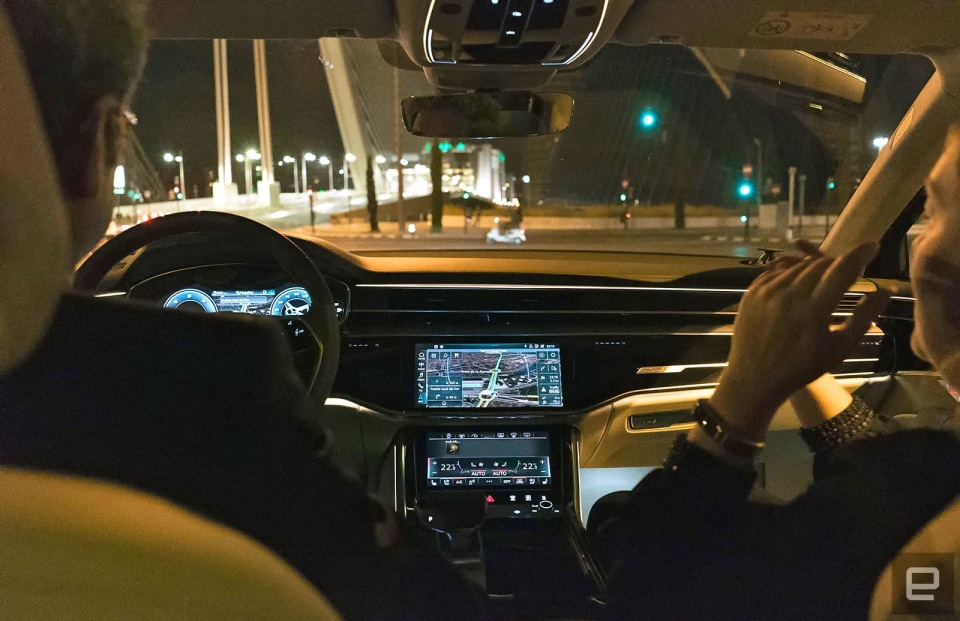 The 2019 Audi A8 is one of the most, if not the most technically advanced cars in the world, so when the company offered a test drive, how could we resist? While we didn't get to see the vaunted Level 3 self-driving, there were still a lot of cutting-edge features on display. If anything, the sheer quantity of technology was a little disconcerting when we drove the A8 through the hills of Valencia, Spain.

There's so much tech on the A8, it's hard to know where to start. Three screens cover the dashboard: one for the instrument cluster in front of the driver, a touchscreen for the Audi MMI infotainment system at center and another touchscreen for climate control that also acts as a writing pad for your finger. Oh, and there's a heads-up display (HUD), of course.

Around the vehicle are a dazzling number of sensors, including long-range radar, four mid-range radars, 360-degree cameras, up to 12 ultrasound cameras and, for the first time in a production car, LIDAR. That's a lot of input data, all of it crunched by a central "zFAS" driver assistance controller. There's also an NVIDIA K1 processing unit to handle the infotainment chores.

All together, this gives you an insane 40 or so driver assist options, including an all-new "adaptive cruise assist," which Audi calls "a progression from the adaptive cruise control of the previous model." Specifically, it incorporates the Level 3 traffic jam pilot, a construction zone assist and other features. It keeps the A8 within a desired speed range and separated from traffic, while applying steering torque to keep you in the lane.

Another new feature is the "crossing assist," which brakes automatically if a vehicle passes dangerously in front. The tech also allows you to use the detachable "Audi Tablet" to self-park in tight spaces, and it can do automatic parallel parking when you're inside the vehicle.

The adaptive cruise assist worked as advertised, decelerating and keeping me back from vehicles in the slow lane on the freeway, then speeding up and safely following vehicles when I changed to a passing lane. I took my hands slightly off the wheel on a corner, and the A8 generally followed it perfectly in the middle of the lane. My only complaint was that it was hard to tell if the system was engaged, as there is a lot of info on the screens.

Audi demonstrated the angled self-parking using the tablet and parallel parking with a driver at the wheel. The parallel parking system didn't work well for part of the test -- the A8 seemed to get too close to a column and stopped. To be fair, this is a pre-production car, and Audi said it would have the bugs worked out before it goes on sale. Still, it was a disquieting illustration of the A8's complexity.

Select models pack an all-new "Audi AI active suspension," an electronic chassis powered by a 48-volt system. That gives you dynamic all-wheel steering and a fully active electromechanical suspension that can do some interesting tricks.

For instance, the front camera can scan the road ahead and, when it detects a bump, pre-lift the body to better soak it up. Furthermore, if the 360-degree cameras detect an impending side impact, the suspension lifts the body by up to 80mm (3.1 inches) within a half second to better absorb the blow. That can reduce injuries by up to 50 percent, Audi says.

Audi demonstrated both of those tricks on its "parkour" course. First it showed how the AI electromechanical suspension lifts the car to help absorb particularly rough bumps. From within the car, a drastic speed bump that was fairly rough with the system turned off was much milder with it engaged. But the lift before impact was particularly impressive. Engineers essentially rammed a heavy box into a plexiglass shield placed in front of the A8, fooling the sensors into believing it was an oncoming car. Sure enough, the A8 rapidly lifted, as shown in the video above. Finally, Audi demoed a system meant to prevent accidents when you exit the car. If it detects, say, a bicycle passing from the rear of the car (a hapless Audi employee drove a bike for the demo), it will temporarily block the electronic door release. During the demo, while I filmed from the front passenger seat, the journalist at the rear was unable to open his door just before the bicycle passed. From the front, however, the Audi engineer in the driver seat was able to open his door, as the bike had just cleared it. So, it's a very finely tuned system.

The Audi A8 will come with a wide choice of engine options, including a 3.0-liter V6 with 340 horsepower, a 4.0-liter, 460-horsepower V8 and finally, the rather crazy 586-horsepower W12 (yes, that's a "W," because there are four banks of three cylinders). The latter engine, on top of producing crazy power, lets you switch off cylinders in mid-drive to increase gas mileage.

Eventually, you'll see a plug-in hybrid with a 3.0-liter engine and 31-mile all-electric range. I tested the 340-horsepower V6, which had all the power I needed for passing and for climbing a twisty mountain road.

To navigate, you can put the system into "intelligent search" mode and then just start writing the name of a destination with your finger (voice and other navigation options are also available). The system was very good at picking up my scrawls, and after I entered the first few characters, it brought up a list that I could scroll through. When you first touch either of the two center screens, you get a haptic pulse as confirmation, along with an audible click.

The navigation system was impressively easy to follow, showing up on the instrument display in a large or small size, the central display and the HUD when needed, making it nearly impossible for me to get lost. (I tried, believe me.) Once during the demo, however, it went dead and refused to reboot until we called Audi and figured it out. Again, such bugs aren't surprising for a pre-production car and will be fixed, engineers promised. So what's it like to drive the Audi A8 while using all this tech? In a word, overwhelming. Prior to each trip, I had an Audi engineer leaning into the car, carefully explaining all the features. As I mentioned, I was often unsure which cruise control or active drive mode was engaged, as there is a lot of info on those screens. With more time on the car, I'm sure I'd get used to it, but I found it slightly distracting.

I love technology, so it pains me to say that the Audi A8 almost has too much of it. The active driving assist, AI electromechanical suspension and self-parking features rely on brand-new and complex systems that are, by their nature, prone to bugs and breakdowns. At times, it also felt overly gadgety, with a few too many potential driving distractions.

The driving experience was lovely -- it's a beautifully quiet, stable and luxurious car with nearly flat handling and tons of power, even on the "low-end" 340-horsepower version. And Audi did stellar work with the redesign, giving it more personality and nicely remaking the last model's boxy front end.

Audi didn't show off the Level 3 "traffic jam pilot" in Valencia, and that feature is perhaps the best example of how Audi is really pushing it far on the tech. It's essentially a more advanced version of the adaptive cruise assist that works at speeds from zero to 37 mph, letting you do other things like watch a movie, though you need to be ready to grab back control. Given all the infotainment options on hand, that feature could become popular in traffic jam-prone areas.

However, you must stay in one lane, and it requires clear markings and a center barrier separating you from oncoming traffic. Even if all of those conditions are met, Audi notes that it requires "both clarity regarding the legal parameters for each country and specific adaptation and testing of the system." In other words, Audi has no control over when it will be legally allowed to activate the system, but it could be quite a while after you buy the A8.

Despite my caution, you have to give Audi credit for trying all this stuff. The 2019 A8's tech is bound to trickle down to other Audi models and inspire rivals to do the same to compete. Introducing so many new things is pretty risky, though, so I hope both Audi -- and its well-heeled drivers -- can handle the challenge. It comes to Europe by the end of the year starting at €90,600, or around $103,000. As mentioned, it arrives to the US by summer of 2018, but exact US pricing isn't yet available.

In this article: A8, Audi, AudiA8, Autonomous, gear, Hybrid, Level3, Self-driving, transportation, video
All products recommended by Engadget are selected by our editorial team, independent of our parent company. Some of our stories include affiliate links. If you buy something through one of these links, we may earn an affiliate commission.