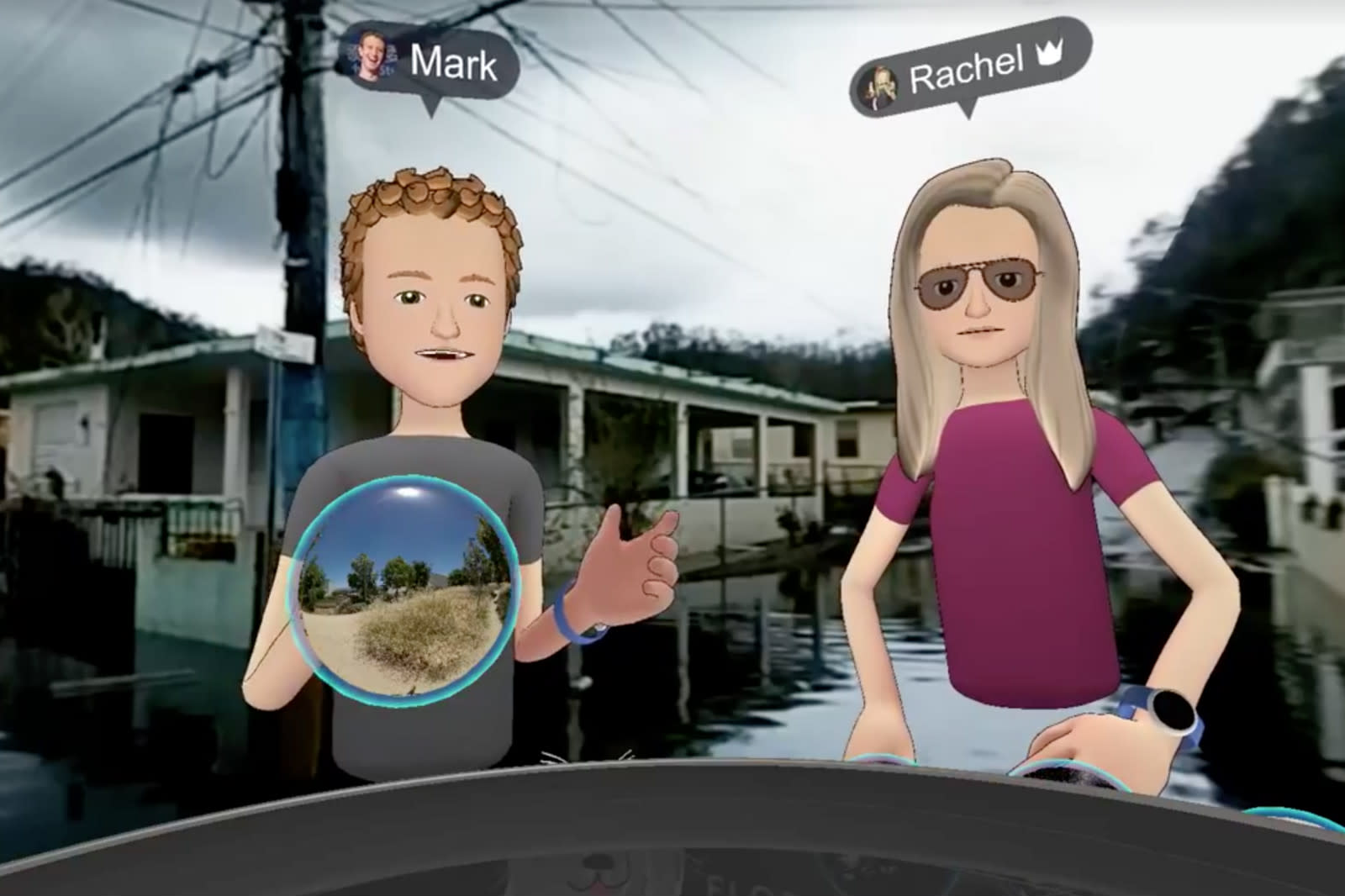 More than three years have passed since Facebook purchased virtual reality headset-maker Oculus VR for $2 billion. Now, with its fourth annual Oculus Connect event fast approaching, Mark Zuckerberg is demonstrating the unique ways he uses VR. While the rest of us goof around with friends, take selfies, and go live on the social network's virtual reality experience (known as Facebook Spaces), the company's CEO plugs in to coordinate his humanitarian endeavours. In the course of his latest virtual livestream, Zuckerberg met up with Facebook's head of social VR Rachel Dwyer. They then set course for Puerto Rico to explain how the tech giant is utilizing machine learning as part of its relief efforts on the island.

To make the transition from California to the Caribbean, Zuck used a "transportation orb," which sounds like something you'd find in a kids' sci-fi flick of the Flight of the Navigator variety. It's essentially just an interactive, 360-video backdrop that allows you to transition from one virtual environment to another.

As Zuckerberg explains in the stream, Facebook is doing its part to help hurricane victims on the island. Aside from monetary assistance, it's also offering its AI-assisted maps to aid search and rescue teams on the ground. These come in three shapes and sizes. The first uses Facebook's existing tech to create a location density map to indicate where people were stationed before and after a natural disaster. The second reveals movement data between cities and neighborhoods during set time periods. And, the third taps into the company's Safety Check tool to show the areas where clusters of people are marking themselves as safe. Facebook is sharing the maps with the Red Cross in Puerto Rico, and in collaboration with tech nonprofit NetHope. Elsewhere, it's using the same software as part of its global internet delivery plans.

Like a regular Mr. Peabody and Sherman, Zuck and Dwyer then zapped themselves to the Oculus Connect stage, and then the moon. The CEO should be back on earth in time for the main event on Wednesday, where he'll announce plenty of new VR updates.

In this article: facebook, facebookspaces, gear, internet, MarkZuckerberg, oculus, oculusvr, PuertoRico, VirtualReality, vr
All products recommended by Engadget are selected by our editorial team, independent of our parent company. Some of our stories include affiliate links. If you buy something through one of these links, we may earn an affiliate commission.