Amazon's new Kindle Oasis is waterproof and has a bigger screen

The latest premium Kindle has a lot more going for it.

We called Amazon's last Kindle Oasis "the perfect e-reader for the one percent." That still describes the new Oasis, which Amazon is officially unveiling today. To be fair, it's slightly less expensive than its predecessor, starting at $250/£230 instead of $290. It also includes some genuinely useful features: a larger 7-inch screen, an all-metal body, and yes, it's waterproof. A decade after introducing its first e-reader, Amazon has finally delivered the first beach-ready Kindle.

If you didn't like the design of the last Oasis... well, tough luck. Amazon basically refined its look for this year's model. It's still very thin (3.4 millimeters) on one end, with a larger hump on the other. While it appears lopsided, it actually feels balanced when you hold the Oasis one-handed. The big change this time is the larger 7-inch screen, which Amazon says can hold 30 percent more text than before. It still packs in a sharp 300ppi resolution (Amazon's standard for the last few years), and includes 12 LEDs for uniform lighting. 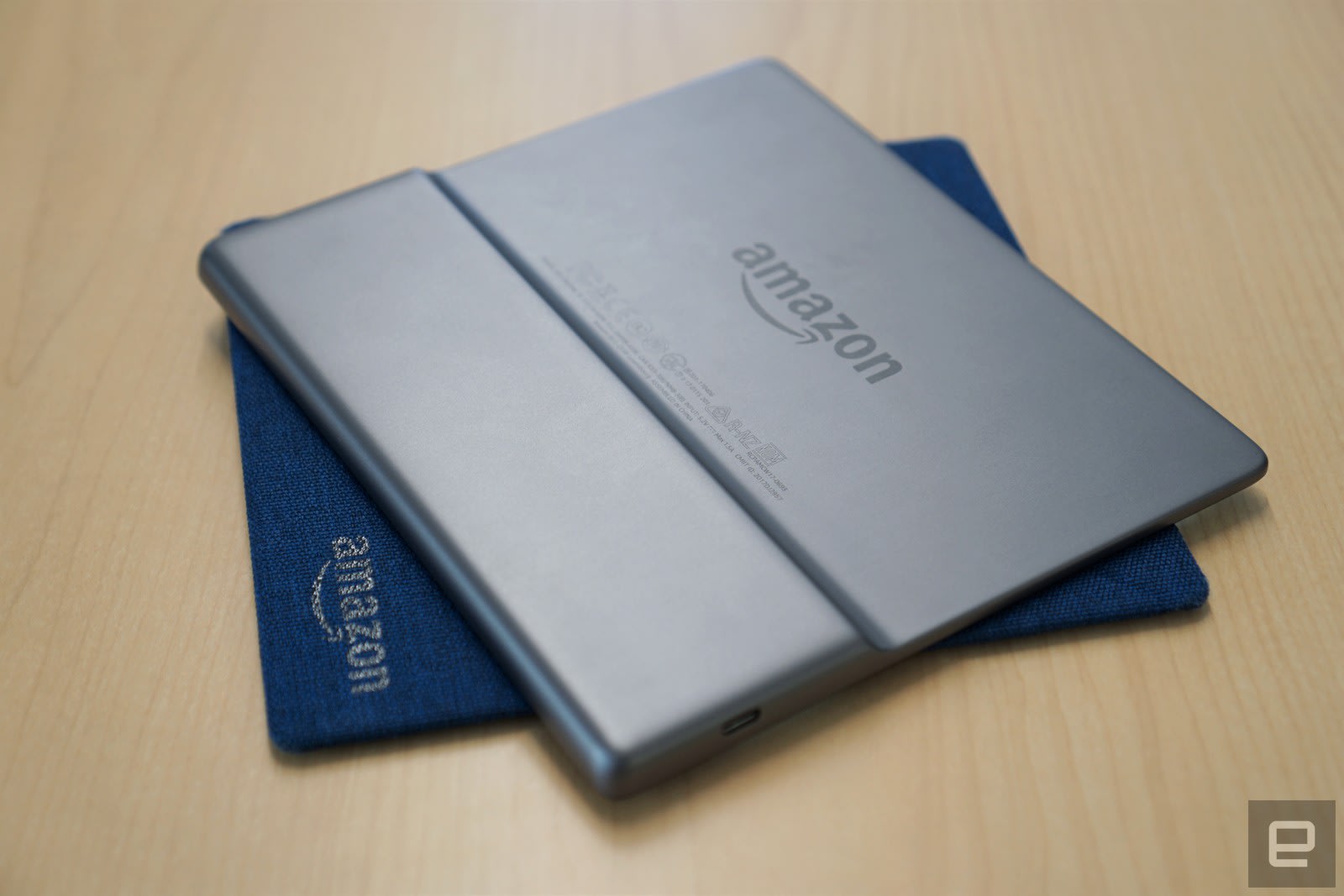 The new Oasis marks the first time Amazon has moved beyond a 6-inch E-Ink display in its standard Kindles. The bulky Kindle DX featured a 9.7-inch screen, but that model was too expensive (it started at $489!) and unwieldy for most consumers. Amazon reduced the new Oasis's bezel size and moved to a slightly larger frame to fit in the bigger screen. The case is also made of aluminum, another first for the Kindle line. Last year's Oasis relied on an electroplated metal alloy over a standard plastic case.

The larger frame makes it slightly heavier -- 194 grams, compared to its predecessor's 131 grams. The new Oasis doesn't feel as unnaturally light as the last model, which was one of my favorite aspects of that e-reader. Still, the new model is by far the sturdiest Kindle I've ever held, thanks to its metal case. It didn't feel like it'd be uncomfortable to hold while diving into a new book for hours. And as I mentioned above, the new Oasis is also waterproof with an IPX8 rating. Amazon says it can withstand up to two meters of water for 60 minutes.

The company also managed to squeeze in a bigger battery into the Oasis for up to six weeks of reading time. The last model only had two weeks of juice on the e-reader itself, and its included leather case added another six weeks of reading. Unfortunately, that also means Amazon isn't including a leather case anymore. That omission is likely what led to the price drop, which seems like a better deal in the long run. You can still pick up a separate leather case for $60, or a waterproof cloth case for $45. 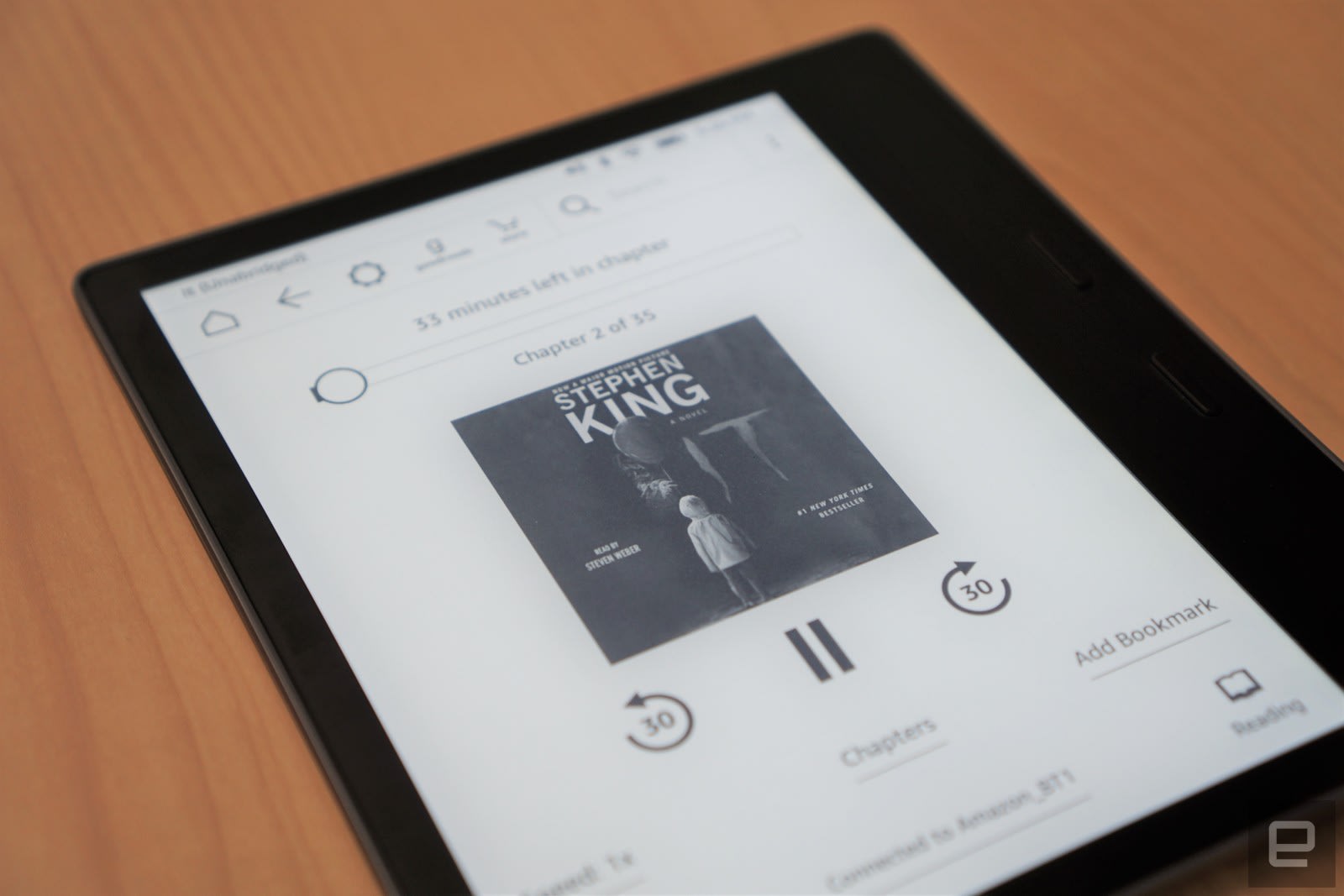 Another first for the new Oasis? It's launching with support for Audible audiobooks. You can connect it to any Bluetooth audio device and easily switch between the spoken word version of a book and the text. Of course, you'll still have to buy the Audible and Kindle releases separately. You can also find a few titles on Amazon's Kindle Unlimited service, which gives you access to a limited selection of books and audiobooks for $10 a month. Audible support is also coming to the last Oasis and the entry-level Kindle, as well. Unfortunately, it won't appear on the Paperwhite and Voyage, which don't have Bluetooth.

Amazon also included a few helpful accessibility features in the new Oasis. You can make the display invert black and white, giving it a black background and white text. That should make it easier to read at night. I've never seen that before on an E-Ink display -- Amazon tells us they had to tweak some custom hardware to make it work. You've also got additional font size and boldness settings, which give you more customization of how text appears on the Oasis's larger new display. (Those options will eventually appear on older Kindles.) And typography nerds will likely appreciate the new ragged right alignment, which displays text similar to printed books. 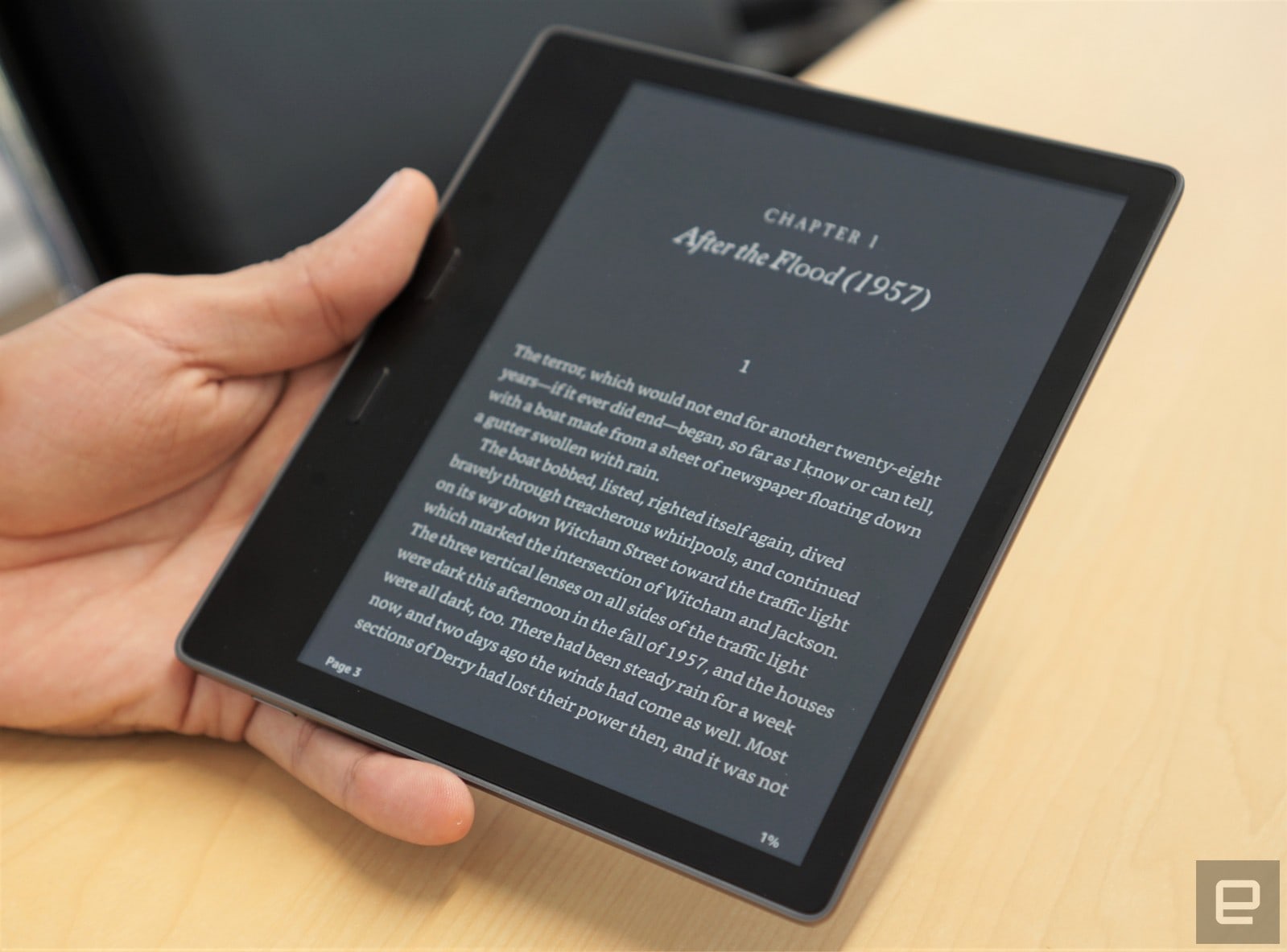 I didn't have much time to demo the new Oasis, but it's certainly intriguing. I've been a devotee of Amazon's e-readers since the Kindle 2, and I was surprised just how different having a seven-inch screen felt. The text looked just as sharp and crisp as the last Oasis, Voyage and Paperwhite, all of which also feature a 300ppi resolution. But I'd imagine it being much more convenient to get through long books without constantly turning pages. Speaking of which, the Oasis's page turning is incredibly fast. It looks to be only a fraction of a second faster than the last model, but it's one step closer to instantaneous E-Ink page turning.

The new Oasis starts at $250/£230 with 8GB of storage, and there's also a $280/£260 model with 32GB of space (which could be ideal for serious Audible listeners). And if you've just got to have cellular connectivity, you can nab that together with 32GB of storage for $350/£320. You can preorder the Oasis today, and Amazon will start shipping them out on October 31st. Keep an eye out for our in-depth review in the coming weeks.

While the $120 Paperwhite remains the most sensible Kindle for most people, this new Oasis brings Amazon one step closer to its dream of an ideal e-reader: a magical piece of paper that contains every book on Earth.

All products recommended by Engadget are selected by our editorial team, independent of our parent company. Some of our stories include affiliate links. If you buy something through one of these links, we may earn an affiliate commission. All prices are correct at the time of publishing.
Amazon's new Kindle Oasis is waterproof and has a bigger screen
amazon
ereaders
gadgetry
gadgets
gear
Kindle
KindleOasis
KindleOasis2017