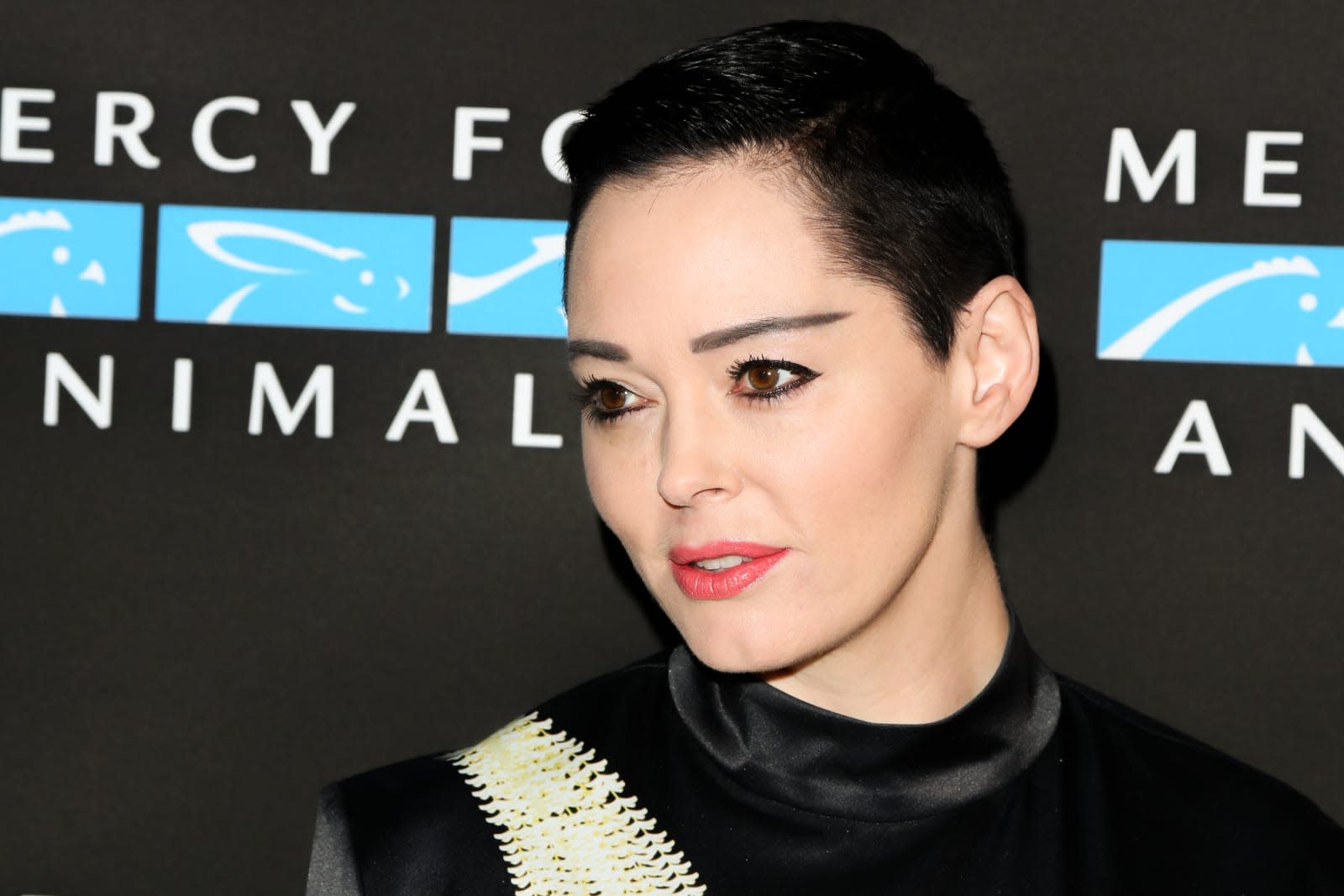 Over the last week or so, rumors about movie executive Harvey Weinstein have turned into actual reports of sexual harassment and rape by The New York Times and The New Yorker. As a result of those public reports, he has been fired by the board of his own company, while many in Hollywood (and beyond) have come forward to talk more openly about incidents of sexual harassment and assault. One of the most notable voices has been that of actress Rose McGowan, who tweeted last year that her own assault has "been an open secret in Hollywood/Media & they shamed me while adulating my rapist." Tonight, Twitter temporarily pulled the plug on her account.

Since the news broke -- including a report by the NYT that he reached a settlement with her in 1997 -- she has pushed for The Weinstein Company to dissolve its board, saying that they knew about his settlements, and said that Ben Affleck lied when he denied knowing about Weinstein's history. Now, she posted a screenshot to Instagram showing that Twitter has suspended her account for 12 hours, citing unspecified posts that break its policy -- the same policy that has struggled to curtail Russian manipulation campaigns, white supremacists, ISIS and any number of bots for any number of reasons.

Many high profile bans have been for very specific reasons, but it's not immediately clear what triggered this action. Recently Twitter's CEO said "We're putting significant effort into increasing our transparency as a company, and commit to meaningful and fast progress," but none of that is evident here. The company has justified other moves in favor of retaining tweets or accounts because they're "newsworthy" and lately, McGowan's posts more than fit that bill. Still, for unclear reasons, Twitter's stance has it positioned against a vulnerable voice instead of serving to amplify it and drive needed change. We will update this post if Twitter provides any explanation why.

TWITTER HAS SUSPENDED ME. THERE ARE POWERFUL FORCES AT WORK. BE MY VOICE. #ROSEARMY

I needed a laugh, thank you https://t.co/qXDWYXZmkU

@benaffleck "GODDAMNIT! I TOLD HIM TO STOP DOING THAT" you said that to my face. The press conf I was made to go to after assault. You lie.

TWC You don't get to change your company name & be done with it. Every man there has the blood of sorrow on their hands. You are dirty.

We have been in touch with Ms. McGowan's team. We want to explain that her account was temporarily locked because one of her Tweets included a private phone number, which violates our Terms of Service. 1/3

In this article: entertainment, HarveyWeinstein, internet, JackDorsey, policy, RoseMcGowan, TheWeinsteinCompany, TOS, twitter
All products recommended by Engadget are selected by our editorial team, independent of our parent company. Some of our stories include affiliate links. If you buy something through one of these links, we may earn an affiliate commission.
Share
Tweet
Share