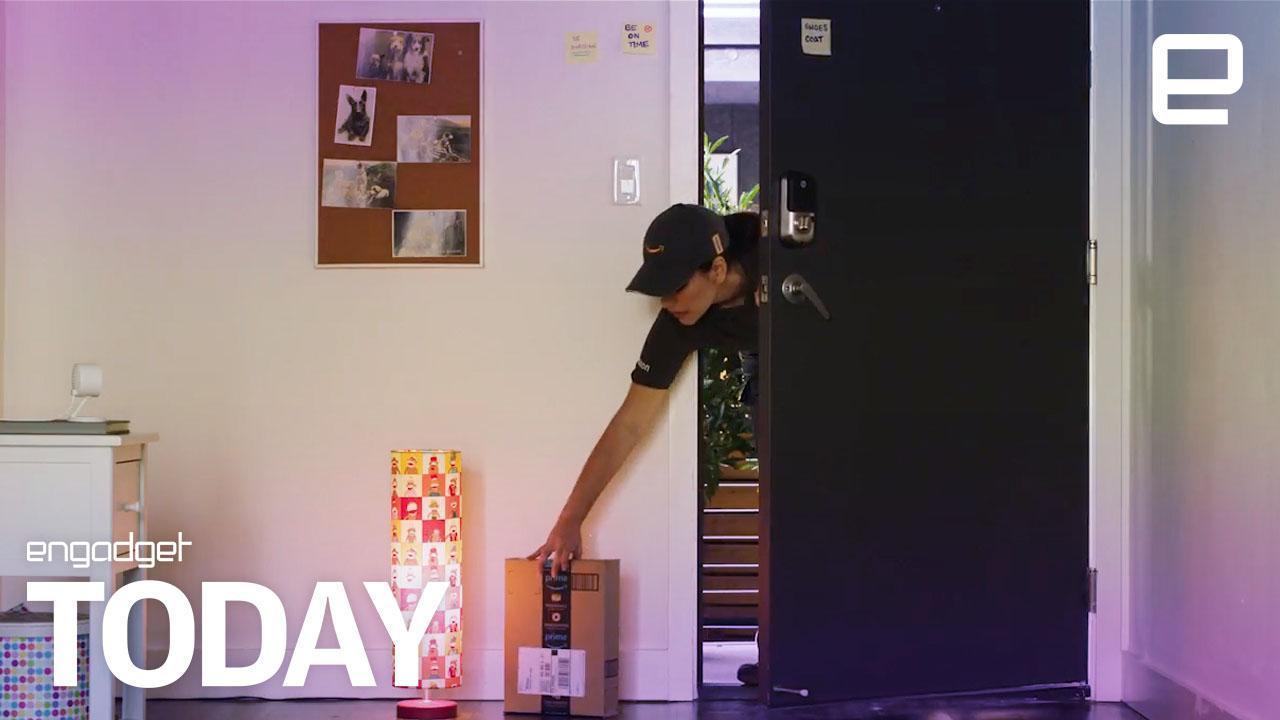 Amazon's gone to a lot of effort to make its services as convenient as possible -- free delivery, lightning fast delivery, delivery from the sky (well, soon, probably) -- now it's eliminating the need for you to even be at home to receive your packages (or to have a designated safe place), because its couriers can now simply let themselves into your property.

It's not as sinister as it sounds, of course. The Prime members-only service, called Amazon Key, uses a smart lock and connected camera. When a delivery is made the courier scans the package's barcode which sends an access request to Amazon's cloud. When it grants permission, the camera starts recording, the courier swipes a prompt on their app and then your door unlocks. They leave the package by the door and relock it on their way out. You'll get a notification that the delivery has been made, along with a video of the drop-off to reassure you everything was done above board.

Amazon has designed the service with deliveries in mind, but Key has a bunch of other uses, too. For example, you can use it to give permanent access to people you trust or temporary access to visitors such as dog-walkers, cleaners or guests (this could be especially helpful for Airbnb hosts).

The service can only be used with a connected camera (which makes sense given the potential privacy issues at hand), but not just any camera: it has to be Amazon's Cloud Cam. The good news is that it's a decent bit of kit in its own right, acting as a home security device and responding to voice commands, provided you have an Alexa-enabled device including the Echo Show, Echo Spot, Fire TV and Fire tablets that support Alexa. It also boasts night vision and two-way audio.

A smart lock, Cloud Cam and installation will set you back $250 (Prime customers can preorder the camera today, the Key service becomes available on November 8). There are no extra charges, but a forthcoming subscription service will give you access to additional features such as footage archiving, motion detection and zone monitoring.

The service -- while set to revolutionize the delivery market -- feels like a huge test of trust. Are people prepared to let strangers into their homes while they're not there, just because it makes getting packages a bit easier? How do security concerns stack up against ultra-convenience? Some might argue the service launches us ever further into a sci-fi-like existence where computers monitor and guide our every move. But as Amazon has already demonstrated with its futuristic drone delivery aspirations and super-connected, Alexa-managed homes, we're not too far away from that reality already.

In this article: amazon, AmazonKey, aoloriginals, CLoudCam, courier, dailyshow, delivery, Engadget, EngadgetToday, engadgetvideo, entertainment, homedelivery, homesecurity, KerryDavis, KeyService, services, surveillance, video, hidden:vv_3x4:fb107910-d702-3da3-9a75-046c0f9c548a, hidden:vv_09x16:bd9b7c30-eac6-3dd7-88f4-2f57c57ae881, hidden:vv_16x09:92d553d5-8ec5-370c-b119-e40cc88b9fdb
All products recommended by Engadget are selected by our editorial team, independent of our parent company. Some of our stories include affiliate links. If you buy something through one of these links, we may earn an affiliate commission.