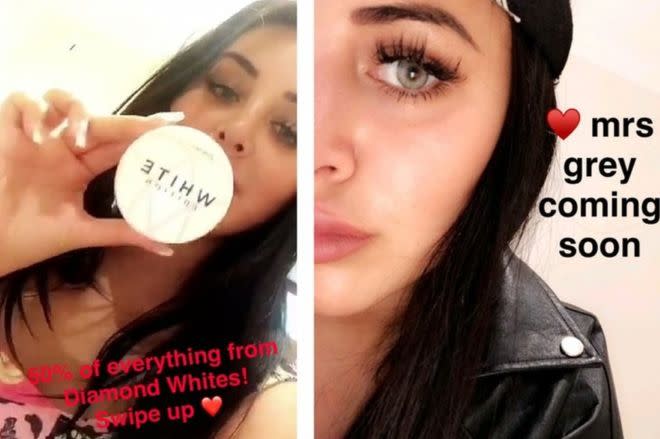 The UK's Advertising Standards Authority (ASA) has its work cut out for it as the line between legitimate online content and ads gets ever blurrier. Social media "influencers" regularly flout the rules and despite the sheer volume of posts across different platforms, the ASA occasionally issues slaps on the wrists for offending Tweets and Instagram campaigns. And today, the ASA has wagged a stern finger at Snapchat posts that weren't appropriately labelled as ads for the first time.

The ASA received complaints about the June 20th Snapchat Story of Marnie Simpson, of Geordie Shore and Celebrity Big Brother fame. In one update, the TV personality promoted a 50-percent off sale for Diamond Whites tooth polish. The company argued Simpson had been a brand ambassador for many years, and thus the commercial relationship was well established. Despite the post obviously being promotional in nature, the ASA effectively concluded that it didn't matter and it still needed an "#ad" tag, making it clear to her followers it was a paid-for post.

In a less cut-and-dry case, another update showed off a new, unreleased colour "coming soon" to Simpson's iSpyEyes brand of tinted and novelty contact lenses. On the basis that the product was not available to buy and the brand itself was not specifically mentioned, Simpson's PR agency argued it wasn't exactly promotional in nature. The ASA disagreed.

In cases like this, the ASA typically demands that offending posts are amended or deleted, but since Snapchat Stories self-destruct after 24 hours, there's nothing to be done at this point. Diamond Whites and Simpson's PR agency have graciously promised, however, to be stricter regarding their client's application of the #ad identifier in the future.

It's unlikely the ASA will be able to divert too much resource towards policing disappearing Snapchat posts. On the other hand, it's important complaints are followed up considering the social app has a primarily young and arguably impressionable user base -- as well as no built-in feature that clearly labels ads, as yet.

Earlier this year, the ASA complained that "hidden" advertising on social platforms was "taking up more and more of our time." And you'd have thought the lengths the regulator went to a few years ago to explain to vloggers what an advert was would've done the trick.