A true jack-of-all-trades in the health-centric smartwatch world.

As the holiday season approaches and New Year's and its inevitable fitness-related resolutions draw near, wearables makers are scrambling. Major brands like Apple and Samsung have realized that smartwatches need to at least be good activity trackers for users to keep wearing them. Samsung decided that "good activity tracker" wasn't enough, though, and built a device around exercise that also packs a slew of smartwatch features. The Gear Sport does so much that it's one of the most versatile health-centric smartwatches in this price range.

I adore the Gear Sport's round face and shiny chrome finish. I especially love my review unit's subtle blue case that manages to be at once unique and understated. The body itself feels sophisticated, but it's a tad chunky even for a sport watch. It's heavier than the Fitbit Ionic, Garmin Vivoactive 3 and the Apple Watch series 3, although slightly smaller than the Gear S3. In fact, it's hefty enough that I dreaded wearing it to track my sleep. But I did anyway, for you, dear Engadget readers. 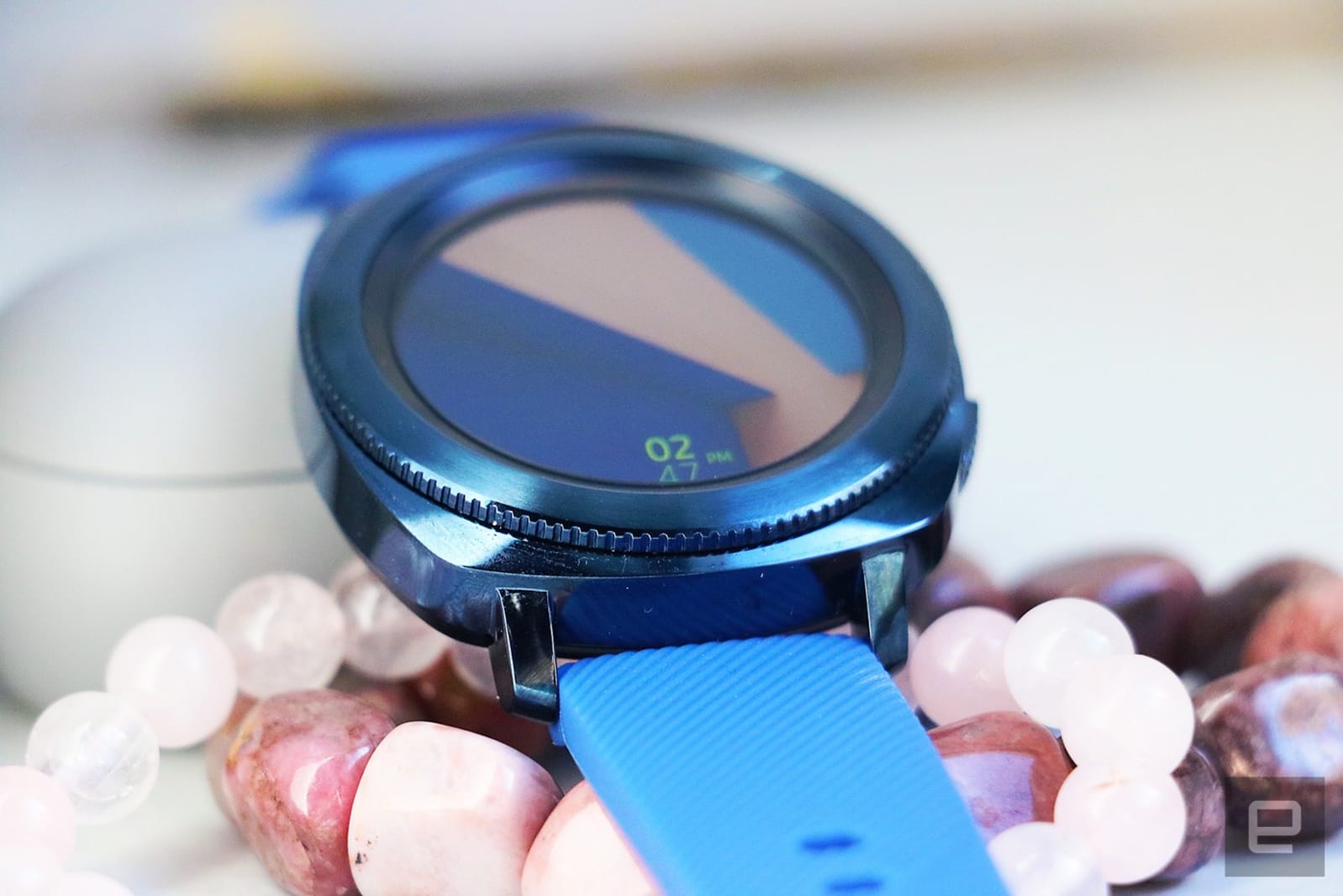 The Gear Sport's standard blue rubber strap isn't the most attractive, and almost makes the watch feel cheap. But at least it's easy to swap this out for any better-looking 20mm band. With the original strap, though, the Gear Sport is water-resistant up to 50 meters, and can even withstand a salty dip in the ocean. I didn't get to go to the beach, so I haven't tested that claim, but it survived being stuck under a running tap.

Like most Samsung smartwatches, the Sport runs Tizen OS and features a rotating bezel that you use to navigate the interface. I love how easy this makes scrolling through notifications and apps, plus it clicks satisfyingly each time I turn it a notch. In fact, this may be my favorite way to use a smartwatch. Those who prefer to swipe may swipe away, too, but I prefer not to smudge up the vibrant, round 1.2-inch Super AMOLED display, which is a pretty crisp 360 x 360.

Tizen OS has come a long way since its birth five years ago. It's easy to use, if somewhat cluttered. It now supports thousands of apps, and there are plenty of useful options you can download, including Uber, MyFitnessPal and Spotify. 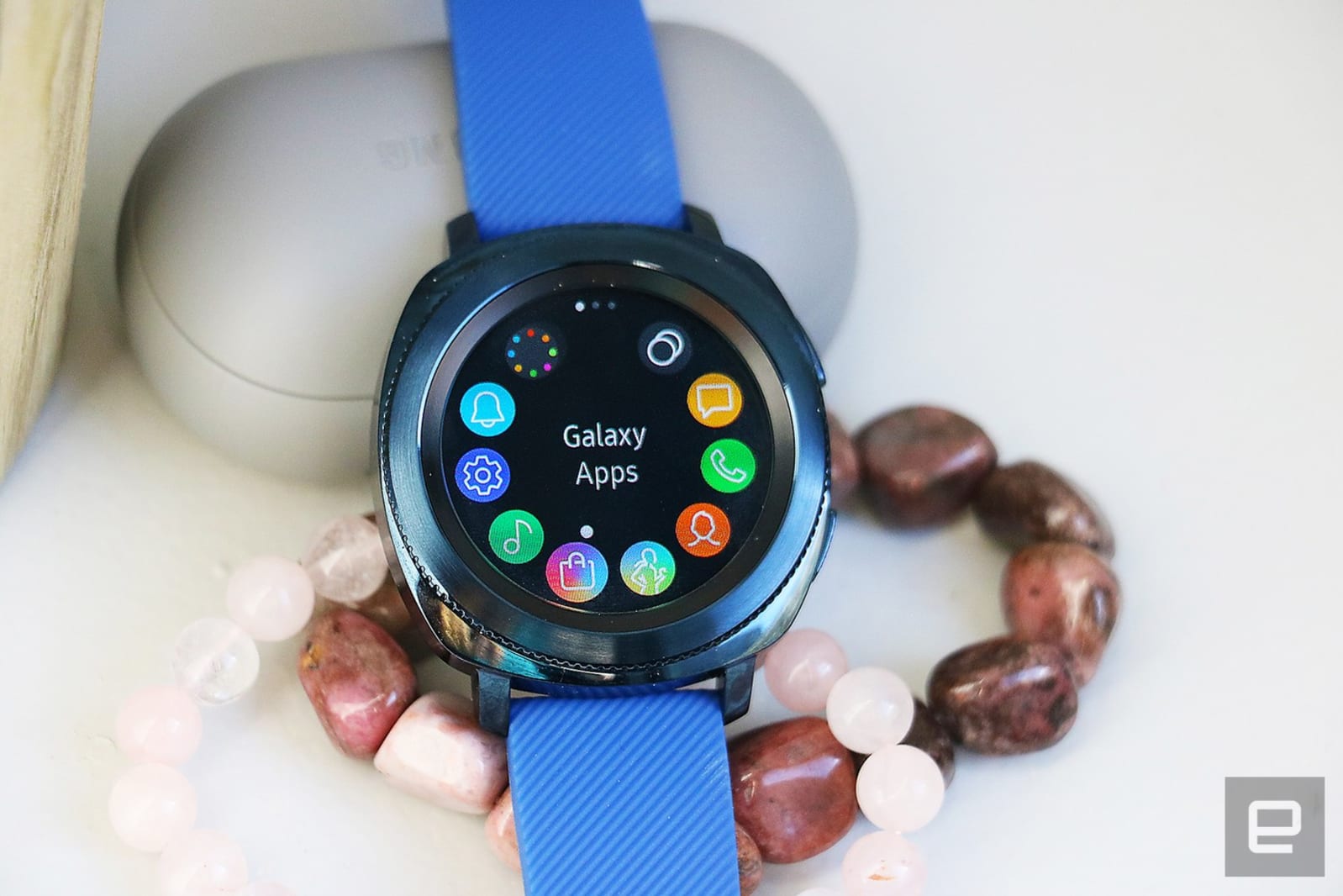 Even if you don't add any apps yourself, the Gear Sport comes chock full of pre-installed options, most of which you can't delete. Some of these are useful, like Messages, Samsung's own S Health and S Voice. But some, like Flipboard's "News Briefing" just add clutter. Install too many, and your app menu quickly loads up. Luckily, you can rearrange them so your favorites are up front and easier to access.

Something the Gear Sport does that the competition can't is let you track your calorie input from the watch itself. No need to whip out your phone to enter how much you're stuffing your belly. It's a lot more convenient, and also gives a clearer picture of your progress throughout the day. Since the Gear Sport knows your net calorie performance all day, it can remind you to either work harder to burn more calories to reach your goal, or eat more if you're under your target.

That never happened during my testing, though, even when the numbers I estimated for breakfast and lunch never added up to my daily target. It's not clear if I had to be off my goal by a certain number before the alerts would kick in, either. Guessing my calories consumed isn't a very accurate way to track my progress, and you can't search for food from a database from the watch itself. But for someone who already knows how much they typically consume, this is a welcome convenience. 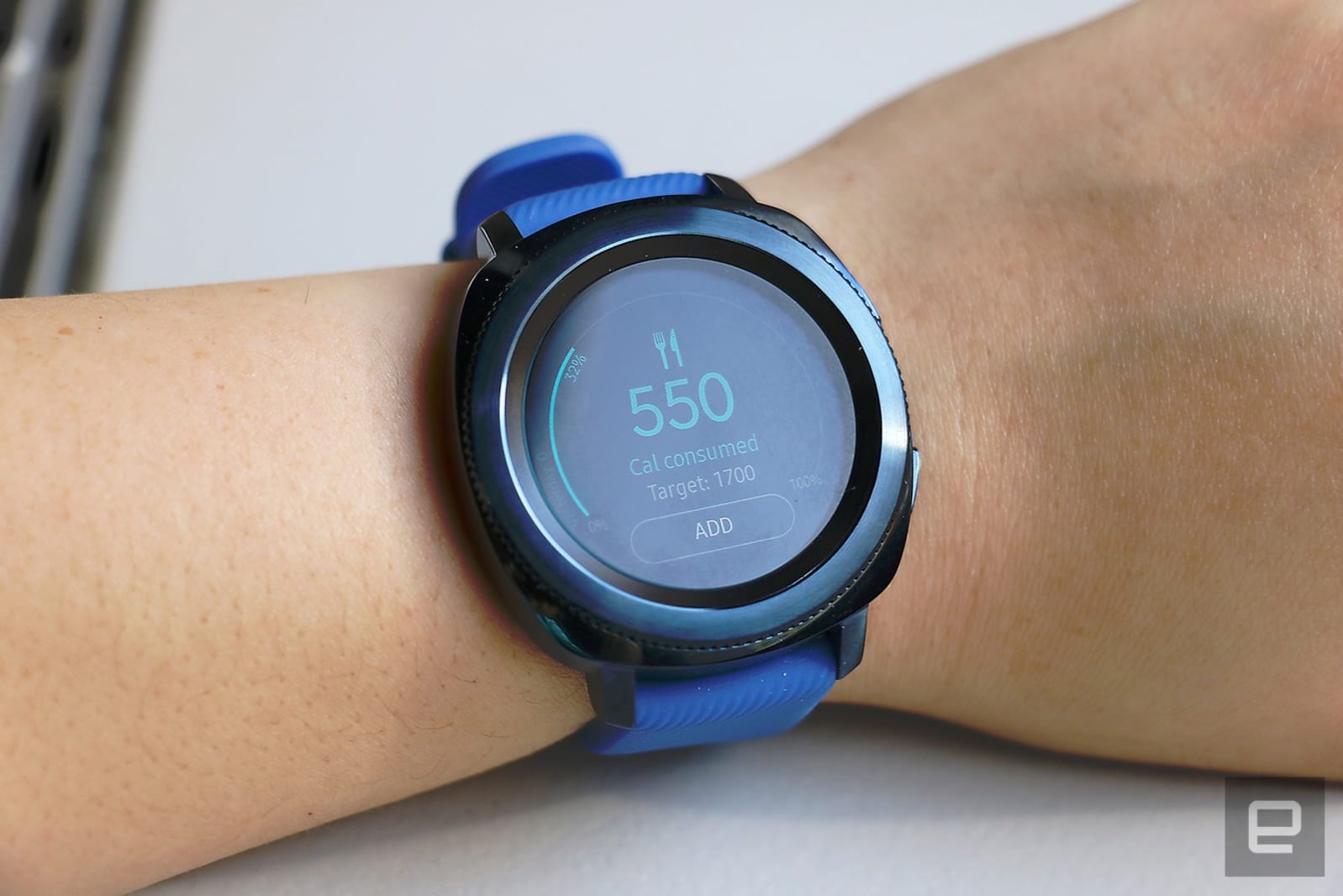 This also makes the Gear Sport feel like a health-first device. Of course, you can map your runs with built-in GPS, and even get your heart rate underwater while you're taking a break between laps. Plus, it will automatically detect workouts like running, cycling and elliptical activity once you've been at it for at least 10 minutes.

If you're using the Gear Sport with a recent Samsung phone or TV, you can get training guides and your heart rate cast to the bigger screens. There are more than 60 workouts available, and the company says more are coming. You'll have to go to the Programs section of the app's menu on your phone, but once you're there, you'll find a comprehensive array of tutorials across categories like "Weight loss," "Endurance training," "Muscle training" and "Running".

I picked "Tabata 4-minute Beginner Fat Burn" from the weight loss group, which added a schedule to my profile, as well as an icon to the watch's Workout widget that would start the tutorial. I tapped the symbol, and a countdown appeared simultaneously on the Gear Sport and my Galaxy Note 8. Both the watch and phone told me what exercise to do, kept me updated on each set's duration and let me skip ahead or pause if I needed. Only the phone displayed a video of each exercise, though.

It felt slightly cumbersome to keep looking at the phone while working out, especially for exercises like planks and leg lifts that made it difficult to see the device. But I can see how convenient this would be on a TV. Fitbit offers a similar guided workout feature on the Ionic, except it shows the tutorials directly on the watch face, which is easier to follow. Fitbit only provides three to five guides for free though, and those who want more need to subscribe to the company's premium plan. Personally, I prefer Samsung's generosity over Fitbit's convenience. 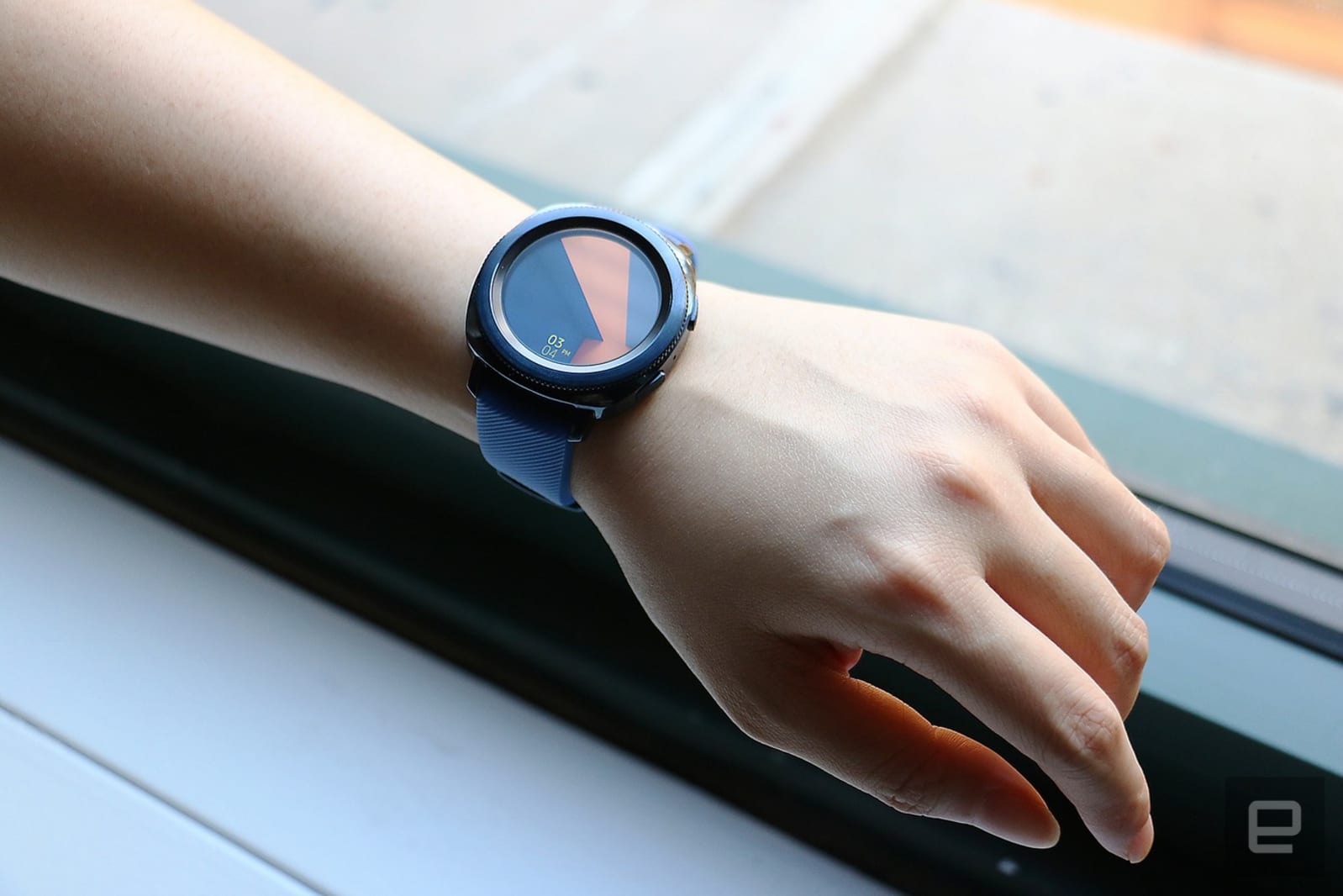 Like rival fitness trackers, the Gear Sport also monitors your sleep, although from my experience it's not as accurate as the Fitbit Ionic. I woke up one night to grab a stray pillow before it fell off my bed, but the Gear Sport didn't register even a blip in my slumber. It also counted an hour I spent looking at my phone one morning as time spent asleep.

The Gear Sport is better at being a smartwatch than it is at being an activity tracker. Not only does it let you send and receive messages, it also stores up to 4GB or so of music. If you're a Spotify Premium user, you can even save your playlists locally. You can stream your tunes to any Bluetooth headphones, but connecting to the $200 IconX earbuds that Samsung launched in tandem is easiest. They feel comfortable, last for two days with my 40-minute commute and deliver decent audio quality.

Being able to play music from your watch is one of a few features meant to make it easier to leave your house without your phone. There's also Samsung Pay, although it works only with NFC and doesn't support magnetic-swipe transmissions like it does on the phone, so you can't use it at terminals that only accept MST. When you're home, you can also use the watch to control connected devices if you own a SmartThings hub. 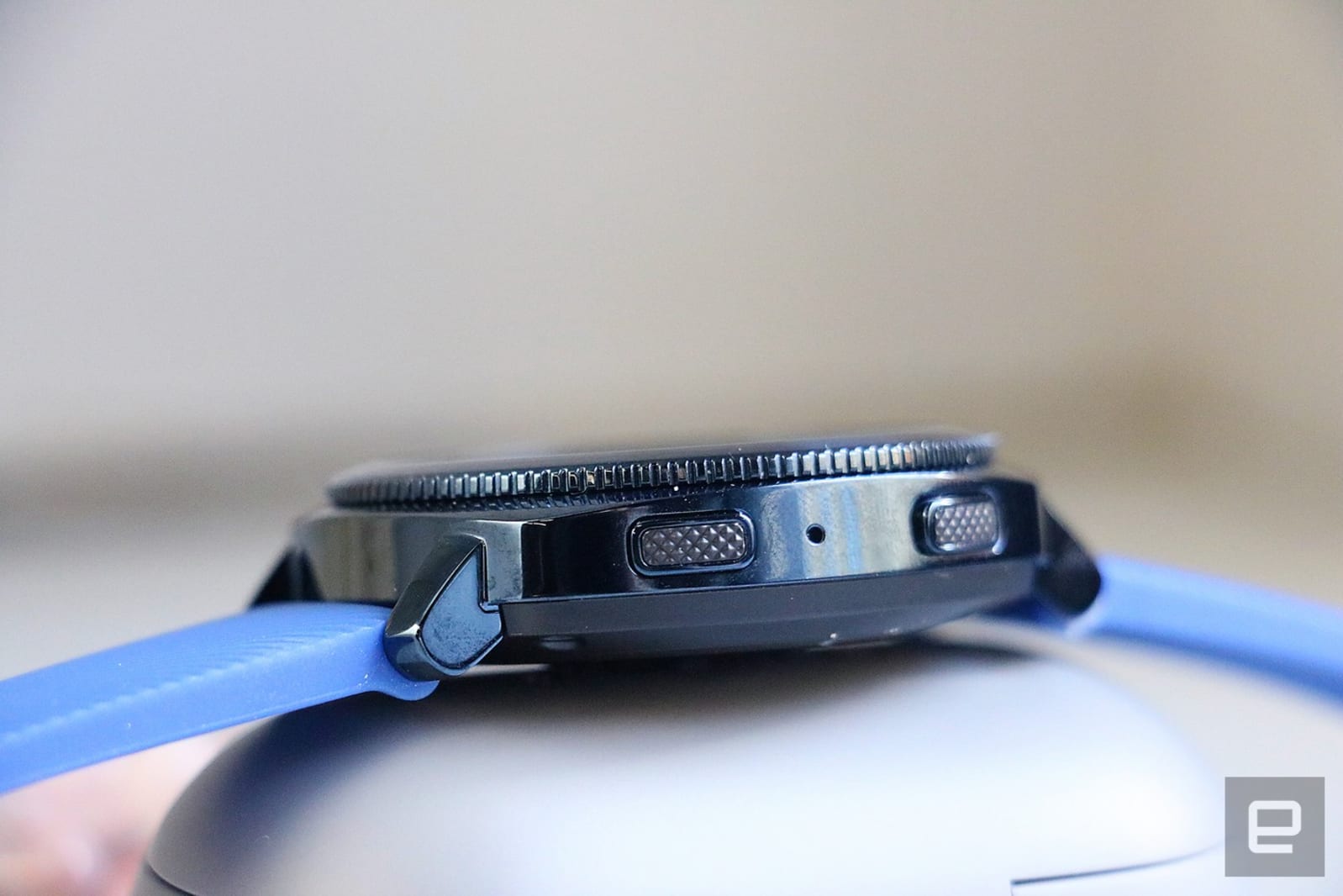 A fun, if slightly gimmicky, thing the Gear Sport can do is act as a remote control for PowerPoint slides on your PC. This was surprisingly easy to set up -- I just had to connect my watch and laptop via Bluetooth, fire up my presentation and use the Gear Sport's bezel to click through pages. I could also draw on the wearable's screen to move the laptop's cursor -- neat!

So far, I hadn't been pushing the Gear Sport very hard. It was 60 percent charged when I first put it on and lasted about three-and-a-half days before asking me to enable low-power mode. That's in line with Samsung's estimate of about three to four days depending on use and beats the Apple Watch 3 by about two days.

The Gear Sport occupies an awkward niche in the $300 smartwatch category. On one end, you have the Apple Watch Series 3, which, by virtue of its better messaging and Siri integration, makes the most sense for iPhone users.

On the other end of the spectrum sits the Garmin Vivoactive 3, which uses the company's own operating system and tracks a wide variety of workouts. It's not as stylish as Samsung's watch, but serious runners may prefer Garmin for its established GPS expertise. Plus, the Vivoactive 3 is supposed to last up to seven days on a charge (though, we haven't tested the device for ourselves and can't vouch for its performance). 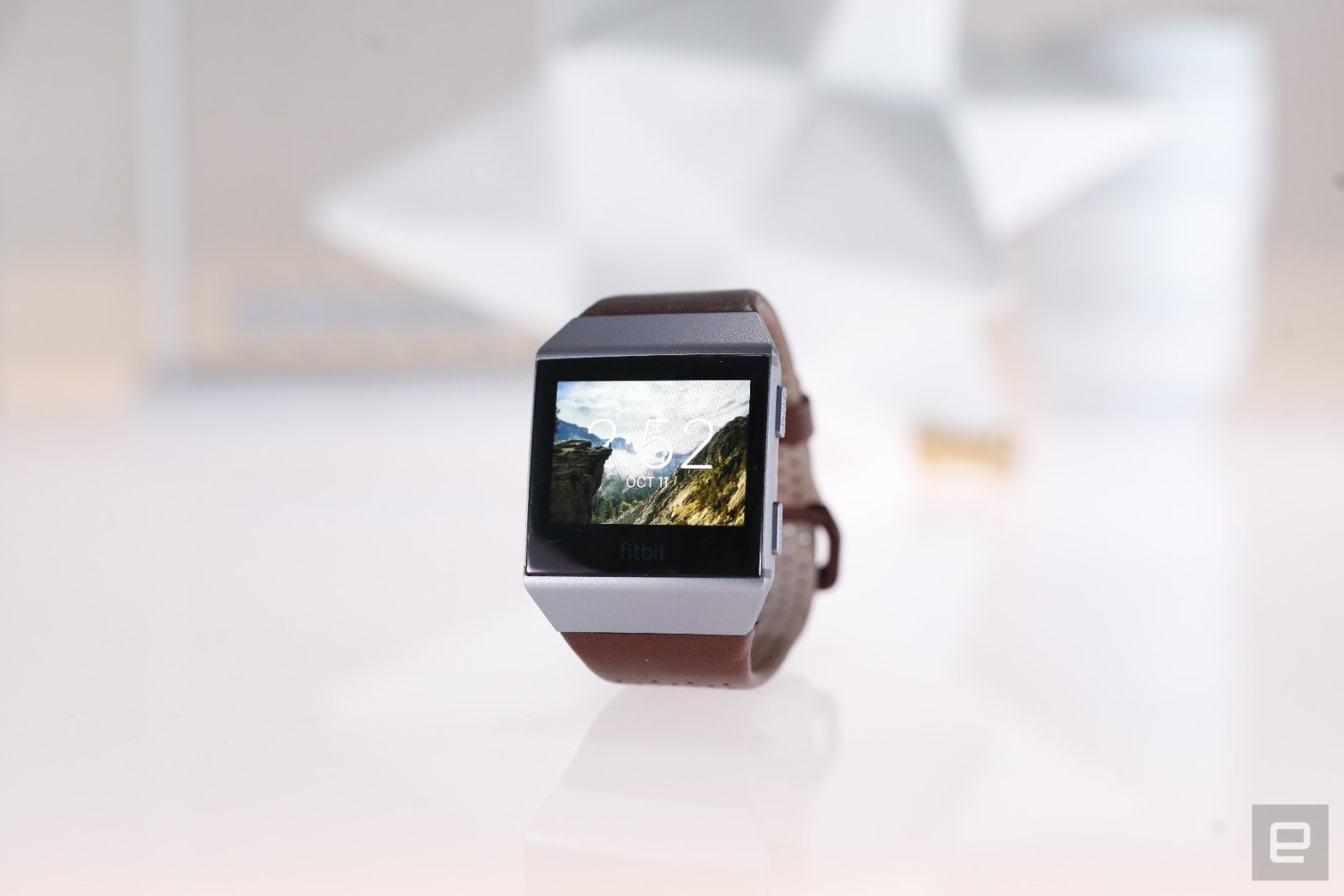 There's also the Fitbit Ionic, which offers better sleep-tracking and more comprehensive fitness features than the Gear Sport. The Ionic's battery also lasts five days with typical use, which is longer than the Gear. But Fitbit's first real smartwatch doesn't offer many of the apps or features we've come to expect. Plus, its geometric design isn't for everyone. The Ionic will most likely appeal to existing Fitbit fans.

Android Wear watches, like the Huawei Watch 2, are the most similar to the Sport. They often pack a heart-rate monitor and track your activity via Google Fit. On the downside, they typically don't last as long as the Gear Sport, aren't as water-resistant and tend to lack the built-in fitness-tracking features like calorie monitoring or automatic activity-detection.

Ultimately, the Gear Sport is almost as robust a fitness tracker as it is a smartwatch, and is one of the most versatile in the category, especially for those who already own Samsung's phones and TVs. Plus, its unique rotating bezel continues to stand out as the best way to interact with a smartwatch. Despite its ambitious array of helpful tools, it still manages to squeeze out impressive battery life. Samsung's fitness-tracking features may not be as accurate as the competition, but the Gear Sport does enough to satisfy casual gym-goers.