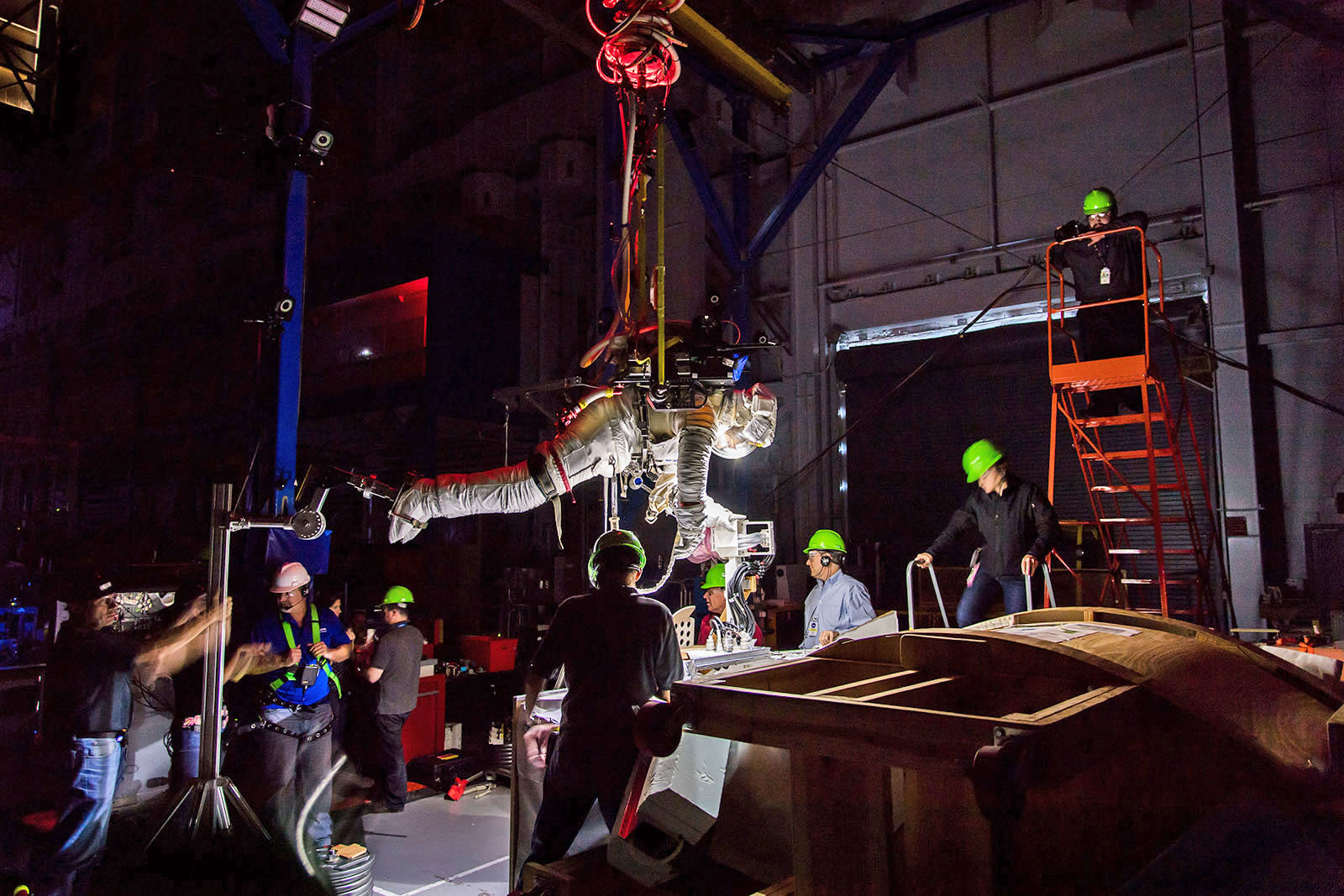 What you're looking at is not a production set photo from Gravity, but rather a training simulation for Canadian Space Agency astronaut Jeremy Hansen. He's suspended over a mockup of the International Space Station (ISS), while attached to the Active Response Gravity Offload System (ARGOS) at NASA's Johnson Space Center in Houston, Texas. For this particular session, engineers ran tests in both light and darkness to simulate the 90 minute day/night cycles experienced by orbiting astronauts.

ARGOS is essentially an overhead bridge crane 41 x 24 x 25 feet in size. Rather than hoisting cargo, however, it lifts up or at least boosts people and any objects they might handle. It has various strain and force sensors that follow the trainees wherever they go, maintaining a consistent force for whatever environment NASA is trying to simulate.

The system has computer-controlled electric motors that drive motion in all three axes. Vertically, a load cell is attached to a cable and commands the motors to raise or lower the load to maintain a constant force as the subject moves. It can accelerate rapidly and move 300 pound loads as fast as 10 feet per second, and 750 pounds at 4 feet per second. Horizontally, subject motion is measured by a cable angle sensor, which commands the system to keep the subject's weight centered below the lifting system.

It can simulate various types of systems, including zero-gravity aboard the ISS and orbiting spacecraft, lunar gravity that's one-sixth of Earth's gravity, and Mars, which has 38 percent of the forces we experience here. ARGOS has different types of "gimbals" that can be used to attach people or objects to create accurate simulations. "These gimbals have been developed for both human (suited and shirt-sleeve) and robotic subjects, and are specialized for various test situations (such as planetary gravities or microgravity)," NASA points out.

ARGOS is aimed at testing and training for future Mars, Moon, asteroid "or any other celestial destination," NASA says. Given the big plans of both NASA and private companies like Boeing and SpaceX, that means it's likely to get heavy use over the next decade or two.

SpaceX, for instance, plans to send cargo to Mars by 2022 and the first manned missions by 2024. A system like ARGOS would be helpful for both types of missions, as it can handle simulations for both robots and humans. It also works for microgravity simulations, so it would be a big help for astronauts during the 200 day schlep to Mars, too.

In this article: Active ResponseGravityOffloadSystem, ARGOS, gear, JohnsonSpaceCenter, Mars, Microgravity, Moon, NASA, space, SpaceWalk, TheBigPicture, thenewbigpicture, video
All products recommended by Engadget are selected by our editorial team, independent of our parent company. Some of our stories include affiliate links. If you buy something through one of these links, we may earn an affiliate commission.