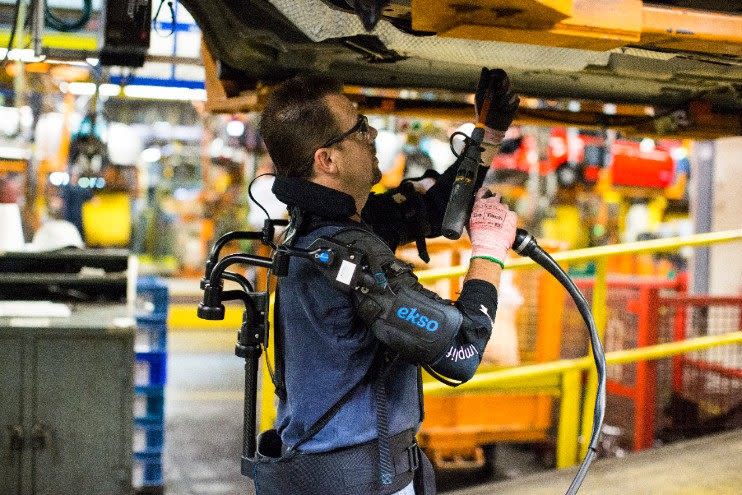 Companies are starting to propose functioning exoskeletons for real applications, from soldier support to helping paraplegic patients walk. But they could also be customized to help everyday workers with their harder tasks, as Lowe's lift-easing prototype demonstrated. Ford is taking a different tack by investing in the EksoVest, a new exoskeleton that supports factory employees' upper bodies to ease strain when lifting and performing overhead tasks.

Certain Ford employees do these tasks up to 4,600 times per day and up to a million times per year, the automaker noted in a press release. The non-powered EksoVest, designed by Ekso Bionics in partnership with Ford, helps lift five to fifteen pounds, easing the strain on users' upper bodies and preventing some fatigue. That assistance could help prevent workplace accidents resulting from tired muscles and minds. The EksoVest fits employees from 5-feet to 6-feet 4-inches tall and is designed for anyone in load-bearing work, from factories to construction sites to distribution centers.

"Collaboratively working with Ford enabled us to test and refine early prototypes of the EksoVest based on insights directly from their production line workers," said Russ Angold, co-founder and chief technology officer of Ekso Bionics, in Ford's press release. "The end result is a wearable tool that reduces the strain on a worker's body, reducing the likelihood of injury, and helping them feel better at the end of the day – increasing both productivity and morale."

Ford is currently testing the EksoVest in two US factories with plans to expand the pilot program to European and South American sites. The United Automobile Workers lent their support to the concept.

In this article: ergonomic, exoskeleton, factory, ford, gadgetry, gadgets, gear, hidden:vv_09x16:f7aef639-bc3a-38c7-bde3-970f840d9ba0, hidden:vv_16x09:e77e8605-1898-3293-97c4-c5d10db7cc0a
All products recommended by Engadget are selected by our editorial team, independent of our parent company. Some of our stories include affiliate links. If you buy something through one of these links, we may earn an affiliate commission.