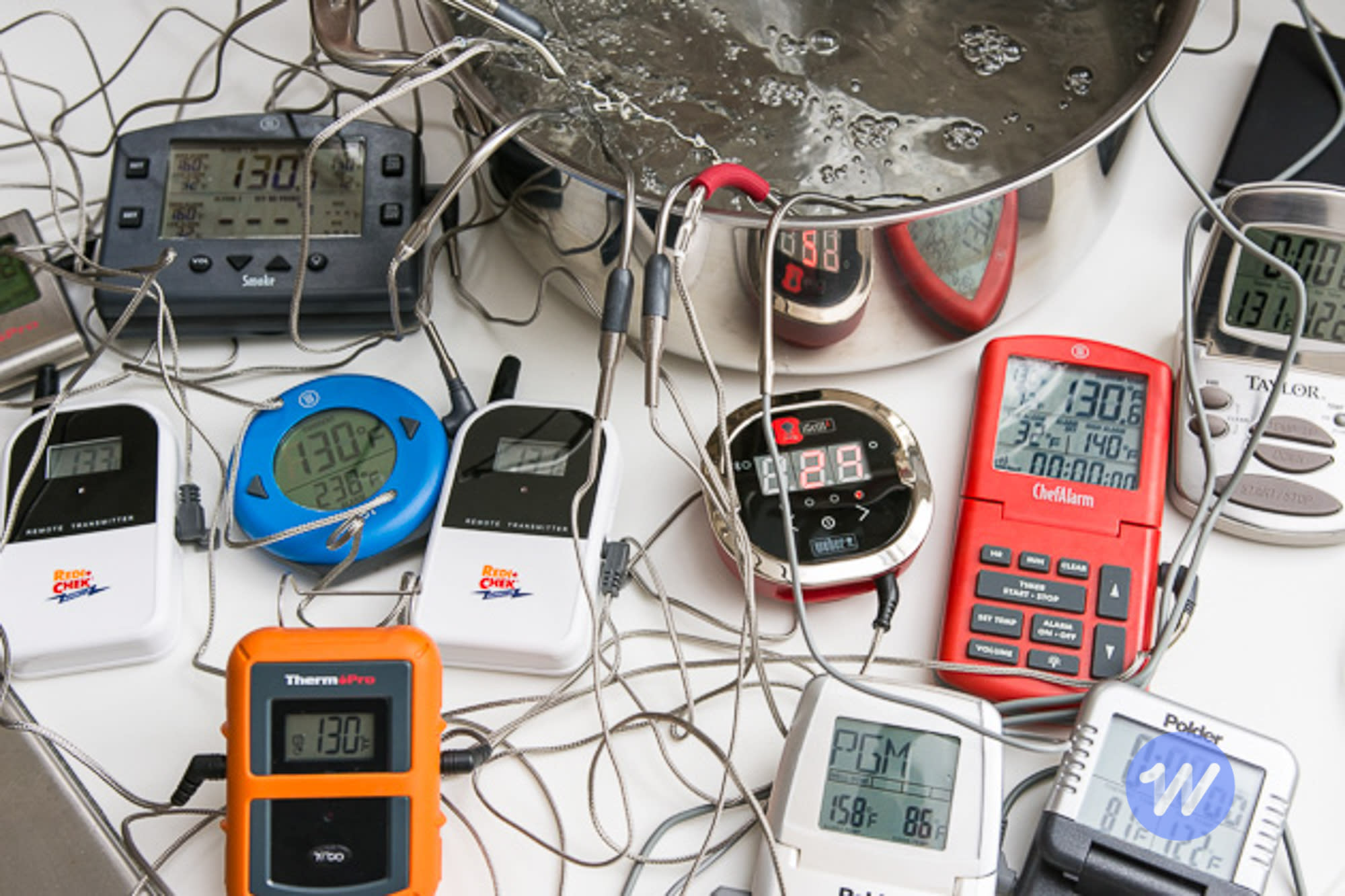 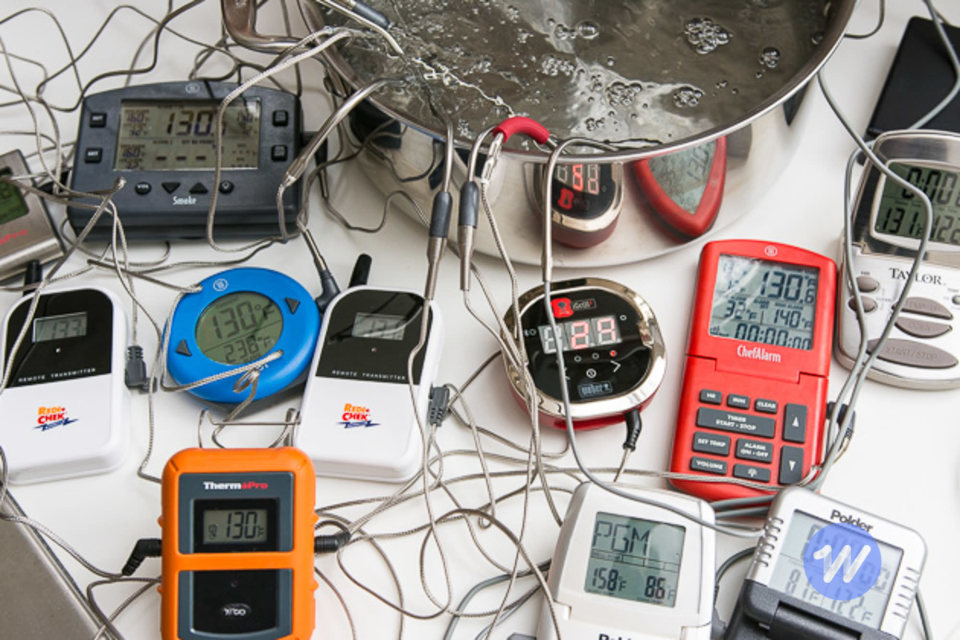 After spending 12 hours testing probe thermometers and speaking with experts—including cookbook authors, chefs, butchers, and a New York City Department of Health employee—we think most cooks just need a regular meat thermometer. But if you're set on getting a probe thermometer to measure the temperature of food while it cooks, we recommend the ThermoWorks Dot. In our tests, the Dot was the fastest and most accurate at reading temperatures. Its simple design and straightforward controls made it easier to use than the competition. Everyone should have a meat thermometer in their kitchen to ensure they're consuming food cooked to safe internal temperatures. The more common kind is an instant-read thermometer, which you can stick directly into food for a few seconds to check the temperature. A probe thermometer is intended to remain in the meat while it cooks. A heat-safe cable attaches the probe to a digital unit outside the oven that displays the temperature reading.

Most of the pros we spoke to recommended getting an instant-read thermometer over a probe thermometer, because they're faster at reading temperatures and longer-lasting. But there are some advantages to using a probe thermometer; namely, that you get an alert as soon as a set temperature is reached, without your having to open the oven door. After testing 11 probe thermometers for this guide, we think the ThermoWorks Dot (center) is the best for most people. Photo: Caroline Enos

For this guide, we looked at three types of probe thermometers:

After testing, we've concluded that remote thermometers are a convenience item most people can live without. We also don't think most people need dual-channel models, which are meant to simultaneously measure the ambient air temperature and the meat. The experts we spoke with agreed that the extra measurements weren't that useful for most people.

We considered probe thermometers with temperature ranges between -58 degrees and 572 degrees Fahrenheit, with probe cables heat-resistant up to 712 °F. Ideally, you want the cable to withstand temperatures up to 700 ºF for safe use on a grill. The length of the cable and the probe itself are also both important factors.

To test the accuracy of the thermometers, we put their probes in a ceramic mug filled with ice water (32 °F), in a pot of boiling water (212 °F), and in a stockpot of 130 °F water maintained by a sous vide circulator. We timed how long it took to reach a steady temperature, and how accurate that temperature was. To get a feel for their real-world usability, we also tested the most promising models in a screaming-hot, 650 °F to 700 °F grill, and while oven-baking pieces of chicken. Our pick for the best probe thermometer is the ThermoWorks Dot. Photo: Caroline Enos

We recommend the affordably priced ThermoWorks Dot probe thermometer for its impressive accuracy and ability to read temperatures quickly. Compared with the others we tested, it was the easiest thermometer to use, thanks to its simple, intuitive design and large digital display. The Dot's wide temperature range makes it ideal for both oven and grill use. The probe is long enough for even the thickest roasts, and it has a conveniently lengthy 48-inch cable.

In our tests, the Dot was the fastest thermometer to read temperatures accurately, typically in less than 9 seconds. Its thermistor sensor has an impressive temperature range of -58 °F to 572 °F (and a cable that can withstand 700 °F for short periods of time). The Dot was one of only three models that were accurate to the degree in a stockpot of 130 °F water. If you want more features, such as a backlit screen and volume adjustment, we recommend two other models by ThermoWorks, the ChefAlarm and the Smoke. They both have longer probes than our main pick, and the same impressive temperature range.

In our tests, the ChefAlarm took a couple of seconds longer than the Dot to read temperatures, but it was just as accurate. The timer on this model is a nice addition, as are the backlit screen and volume control. The ChefAlarm also allows you to set the minimum and maximum temperatures, which have corresponding alarms. Our testers also liked that the ChefAlarm thermometer comes with a case. However, in spite of the ChefAlarm's various benefits, we think most people will be fine with our pick.

Like the ChefAlarm, the Smoke has a backlit screen and volume control. But in contrast with our other picks, the Smoke can operate via a wireless receiver and has two channels to accommodate multiple probes: one probe to take the internal temperature of the meat, and an air probe for measuring the ambient temperature of the oven, grill, or smoker. The Smoke also allows you to set the minimum and maximum temperatures for each probe, which sound corresponding alarms. We don't think you need these features, but if you really want them, the Smoke was the best model we tested that offers them.

In this article: chefalarm, gear, home, partner, probethermometer, syndicated, thermometer, thermoworks, thermoworksdot, thermoworkssmoke, thewirecutter, wirecutter
All products recommended by Engadget are selected by our editorial team, independent of our parent company. Some of our stories include affiliate links. If you buy something through one of these links, we may earn an affiliate commission.