But it's about more than just aliens.

It was just a normal dinner party, with music on in the background and guests splintered off in lively conversation. But just as we were about to sit down to eat, our hostess made a startling confession. She and her husband recently went through a traumatic experience. Rather than just spell it out for us, she played an audio recording of a hypnosis session, which turned out to be their retelling of an alien abduction. Okay, it wasn't a typical supper shindig.

Even if you're a UFO skeptic, there's a good chance you've heard the story of Betty and Barney Hill. In 1961, the interracial couple was involved in one of the first widely reported alien abduction incidents. Dinner Party, which premieres at the Engadget Experience today in LA, tells their story through virtual reality. It does more than just let you relive an alien abduction: Creator Lauren Wexler is also aiming to explore the racial dynamics around the event.

After all, the couple each retold the "abduction" in unique ways. And when viewed through a modern lens, their story sounds more like a traumatic traffic stop -- the sort of thing that a black man might experience rather than a white woman. 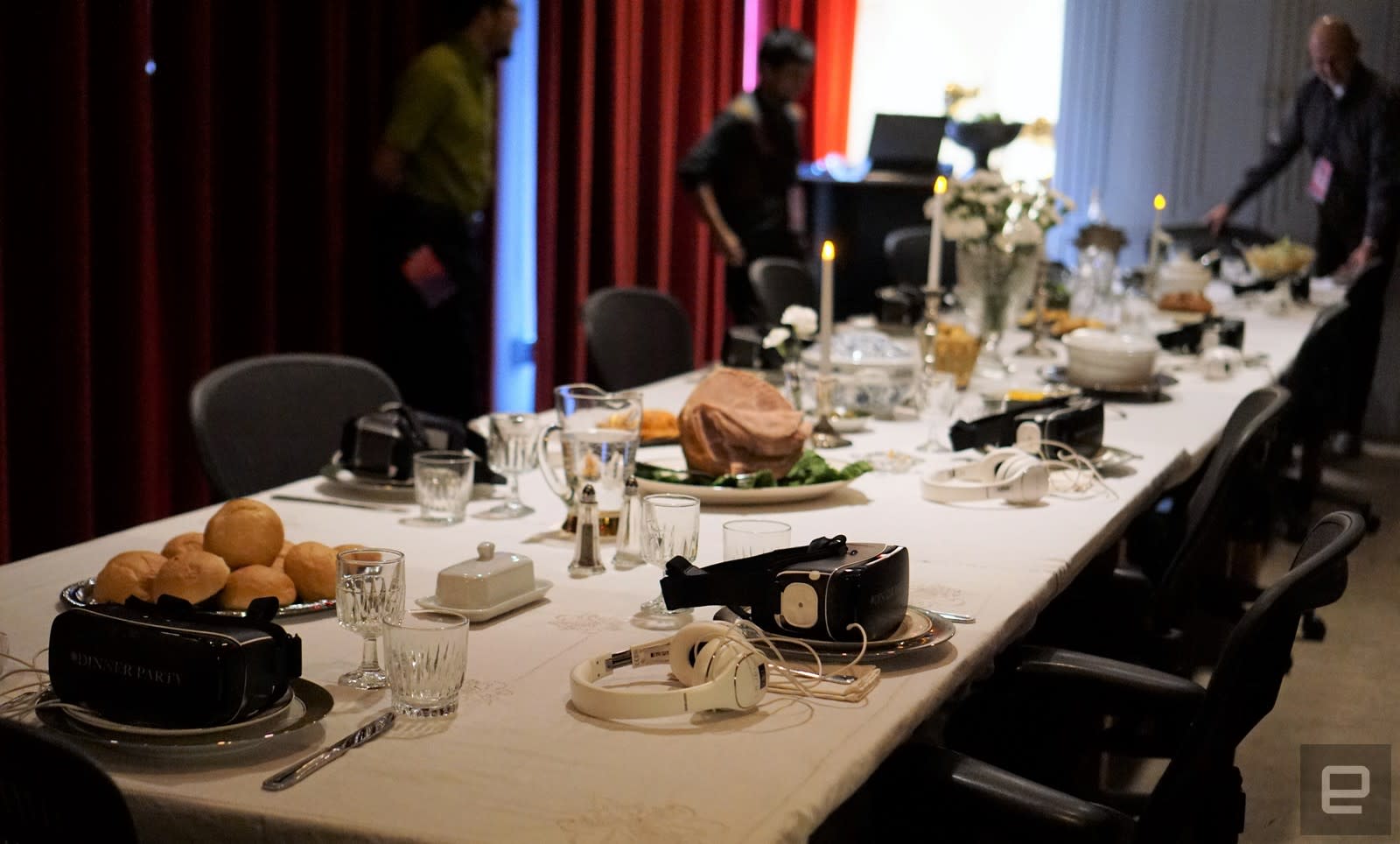 While Dinner Party is only partially completed at this point, it's clear that Wexler and her team are aiming to create something more immersive than just sitting on a couch and slapping on a VR headset. It's set up like you're actually having a group meal with the Hills. I entered a room with an enormous dining table, which featured fancy plate settings and the usual ornaments you'd roll out for impressing your friends. As you'd expect, every seat also featured a Gear VR headset and headphones.

The experience kicks off with Betty recounting the beauty of the stars, which are rendered right in front of you. Eventually, I realized I also had a bird's eye view of the Hill's living room when I looked down. In one smooth, continuous take, the camera slowly panned down and through the space, which is rendered in 360-degree video. I ended up spinning in my seat several times to observe everything happening around me. A plate dropped, and everyone turned their attention to Betty, who went on to pull out the hidden tape.

As she hit play, the camera swooped through a nearby window, and we transitioned to the couple driving peacefully through upstate New York. The trees and road weren't fully rendered yet, but that didn't matter much since I was mainly focused on the couple. Barney complained about having to make a long drive back home to New Hampshire from Montreal, while Betty nestled in his shoulder. Suddenly, a bright light appeared behind them, and the panic-stricken pair could only hold each other as they braced themselves for the unknown. That's just the first half of Dinner Party, though. Wexler says the second half will explore the couple's different experiences during the abduction. She's hoping to have the entire experience ready by early next year, just in time to submit to film festivals.

Wexler aims to make this the first of an ongoing VR series called The Incident, which will tackle famous supernatural tales through a new lens. Think of it as a virtual reality spin on The Twilight Zone. While she hasn't decided on the next topic yet, she's intrigued by the story of Doris Bither, the subject of The Entity haunting. Given VR's ability to transport us to entirely new worlds, it seems like a fitting tool to explore the supernatural.