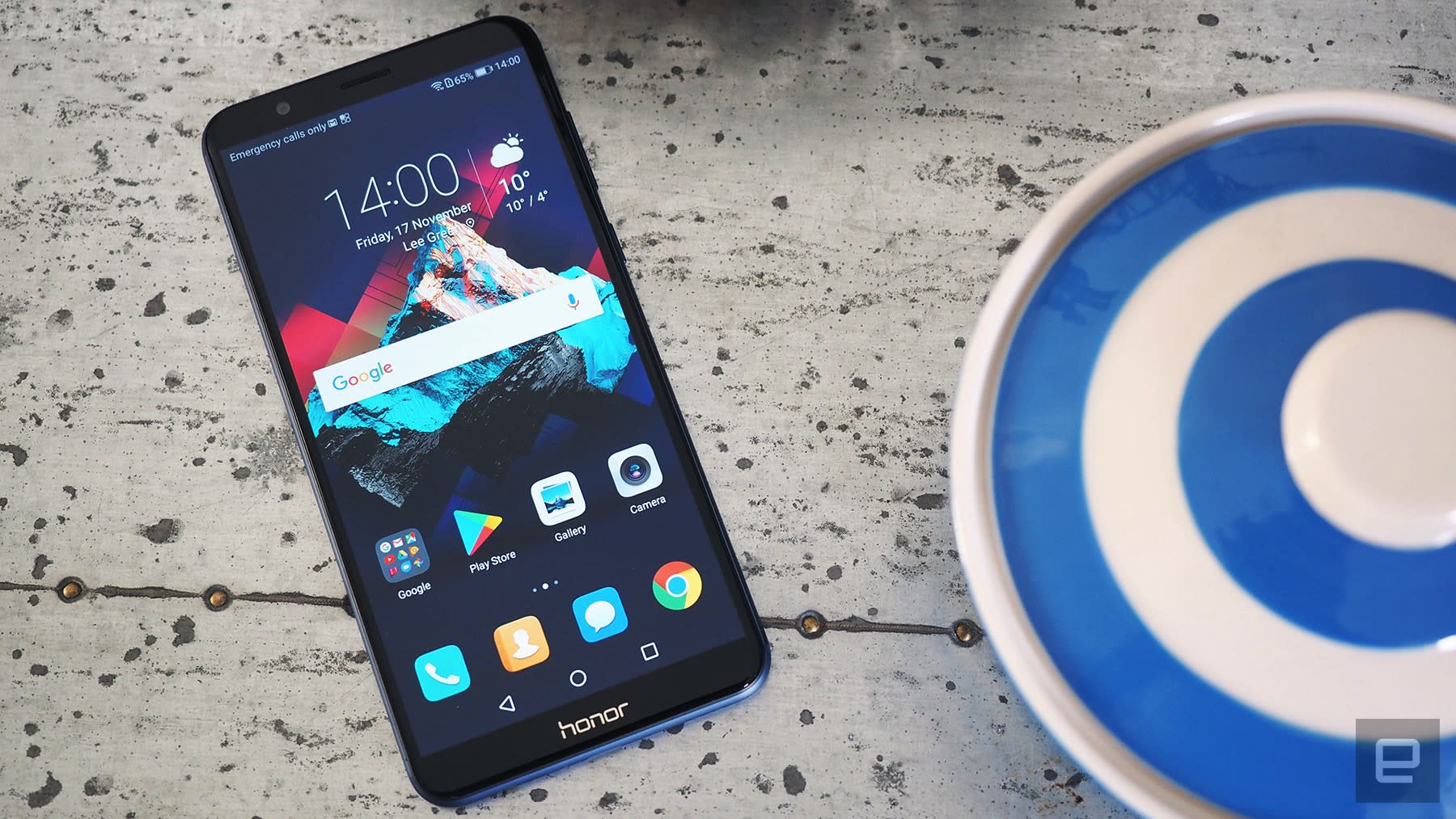 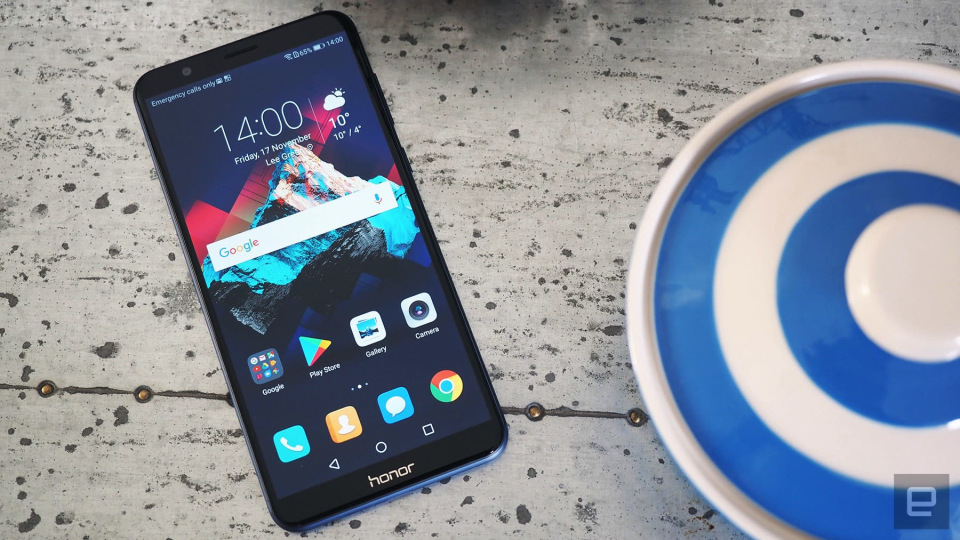 It's no wonder Huawei's been the third-biggest smartphone manufacturer in the world for so long now. The company releases so many of the things, it's hard to keep track. Following Huawei's recent launch of the Mate 10, it's now sub-brand Honor's turn to welcome a new device to its ranks: the Honor 7X. It's designed to succeed the now year-old 6X, which offered dual-camera tricks at a mid-range price. The 7X has a key selling point of its own too, in the form of a big ol' 5.93-inch "FullView" display. Honor says it's basically managed to cram a nigh 6-inch display into the body of a 5.5-inch phone. What the company really means by that is that it's following the flagship trend of eliminating as much bezel as possible to flood the phone's face with pixels, hence the tagline "FullView." It's a good enough attempt but doesn't quite nail the edge-to-edge aesthetic of, say, the Galaxy S8. Truly bezel-less, the Honor 7X is not.

Despite its size, the 7X is comfortable to use even if you can't get to every corner of the screen with just the one thumb. The phone is incredibly light considering its size, metal body and reinforced corners; and there are no sharp angles to dig into your palms as you shift it around to probe far-flung regions of the display. The 7X's 5.93-inch, 18:9, 2,160 x 1,080 LCD screen is undoubtedly the star of the show here. It's big and full of detail, and it cuts through even the brightest of daylight. It can also dim to as low as 3 nits so as not to tax your eyes when you're thumbing through the pages of Engadget while dozing under the covers. You could argue that the big screen is particularly media friendly, but you have to bear in mind that not a great deal is shot with an 18:9 aspect ratio. That means the majority of YouTube videos, as an example, are letterboxed to the left and right of the frame. The camera viewfinder takes up only two-thirds of the screen, for the same reason. There are a couple of features specific to this tall display, though. First, there's a one-key split-screen mode that works with a few messaging apps, including WhatsApp and the standard SMS client.

Should you get a WhatsApp notification while you're watching a video, let's say, you can hit the Android multitasking key and it'll load the app up into another window, side-by-side style. It's kinda like Android's inline reply functionality, but more like Facebook Messenger's bubble, in that it lets you see all the recent chatter in the thread. Honor has also partnered with Gameloft so players of the mobile FPS title Modern Combat Versus get a wider 18:9 field of view while running 'n' gunning on the 7X.

Don't let that big and bright display distract you from the Honor 7X's shortcomings, however. Don't get me wrong: There are other things to like about the handset, the camera being one of them. Or rather, the dual-camera arrangement, featuring one 16-megapixel color sensor paired with a 2-megapixel monochrome number and phase-detection autofocus to boot. Unlike some Huawei phones with a similar setup that can take native black-and-white shots, though, this 2MP sensor is purely capturing lighting and depth information. The data is used to improve contrast and low-light performance, as well as enable you to play around with depth of field to inject digital bokeh into your pics using the aperture setting. The camera app has various common modes you might expect, like HDR and slow-mo video, as well as an iPhone-esque portrait and wide-angle features. The 8MP front-facing camera also has a bokeh mode for introducing background blur into your selfies, and a basic effects catalog for adding animal face overlays, à la Snapchat. Shots from my limited time with the 16MP camera bode well. They came out crisp, well-saturated and with the right amount of contrast more often than not.

Sandwiched between the dual-camera situation and the big screen is Huawei's Kirin 659 octa-core processor (four 2.36GHz cores and four 1.7GHz cores), 4 gigs of RAM, 64GB of expandable storage -- you can choose to stick up to a 256GB microSD card or another SIM into the thing, but not both -- and a 3,340mAh battery. In short, all the power and space you'd want and expect in a mid-tier device. The main issue with the Honor 7X isn't what it's offering, but what it isn't. You get a fingerprint sensor, but no NFC chip, so you can forget about using Android Pay or whatever your preferred mobile wallet/payment service is. There's no waterproof rating to speak of, and the 7X opts for the older micro-USB port instead of USB-C. This isn't the biggest deal; you probably have micro-USB chargers hanging out of plug sockets at home already, but it does mean there's no fast-charging feature for a speedy top-up. Finally, the 7X ships with Huawei's EMUI 5.1 layered over Android 7.0 Nougat -- if you're buying a brand-new phone, you'd like it to have the latest Android 8.0 Oreo build.

Unfortunately, there's no firm word on pricing just yet -- that'll be revealed at an Honor event on December 5th -- but since the 6X cost $250/£225 at launch, I'd expect the 7X to come in below $300/£300. In Western markets, the phone will be available primarily in black and Honor's trademark blue, though a gold version will retail elsewhere. If you're going to be in the market for a mid-range device in the near future, and you like the idea of a decent camera and oodles of screen, then the Honor 7X might be right up your street. That said, assuming $250/£250 is a pretty accurate estimate of price point, remember that there are a number of cheaper devices that have more value-adding features, such as that NFC for mobile payments that the Honor 7X is sorely and strangely missing.

In this article: fullview, gear, hands-on, honor, honor7x, huawei, mobile, smartphone
All products recommended by Engadget are selected by our editorial team, independent of our parent company. Some of our stories include affiliate links. If you buy something through one of these links, we may earn an affiliate commission.