The most important phones of the year have already been announced, but one company might still be able to pique our interest. Huawei unveiled its AI-focused Kirin 970 processor at IFA, saying the chip's real world benefits would be shared at the launch of its next flagship. Now, the company is ready to reveal how the Kirin 970 performs in a phone. The Huawei Mate 10 and Mate 10 Pro were designed around AI -- so much so that Huawei wants to call them "intelligent machines." Huawei told Engadget to expect the prices to be competitive, and in Europe at least, prices start at €699 for the standard model, while the Mate 10 Pro will come in at €799. From my brief time with some preview units at a recent demo in New York, the Mate 10 and Mate 10 Pro certainly have useful AI features and could be worthy competitors to the latest phones from Apple, Google and Samsung. Those who are familiar with the Mate series will notice how different the latest flagship looks compared to previous generations. In place of a matte metal finish is a glossy glass back with a horizontal inch-high gray stripe under the cameras. This band subtly blends in with the rest of the rear but catches your eye when it reflects light, making for a fetching effect. All four sides of the handset are slightly curved, too, so the device feels sleeker and easier to grip.

The Mate 10 and Mate 10 Pro differ in a few ways. The Pro has a larger 6-inch OLED screen than the regular model (which measures 5.9 inches diagonally and uses an LCD panel). Strangely, the Pro's display resolution is just 2,160 x 1,080, while the smaller phone has a sharper 2,560 x 1,440 screen. Huawei said it did this to conserve the Pro's battery, among other reasons it declined to share. 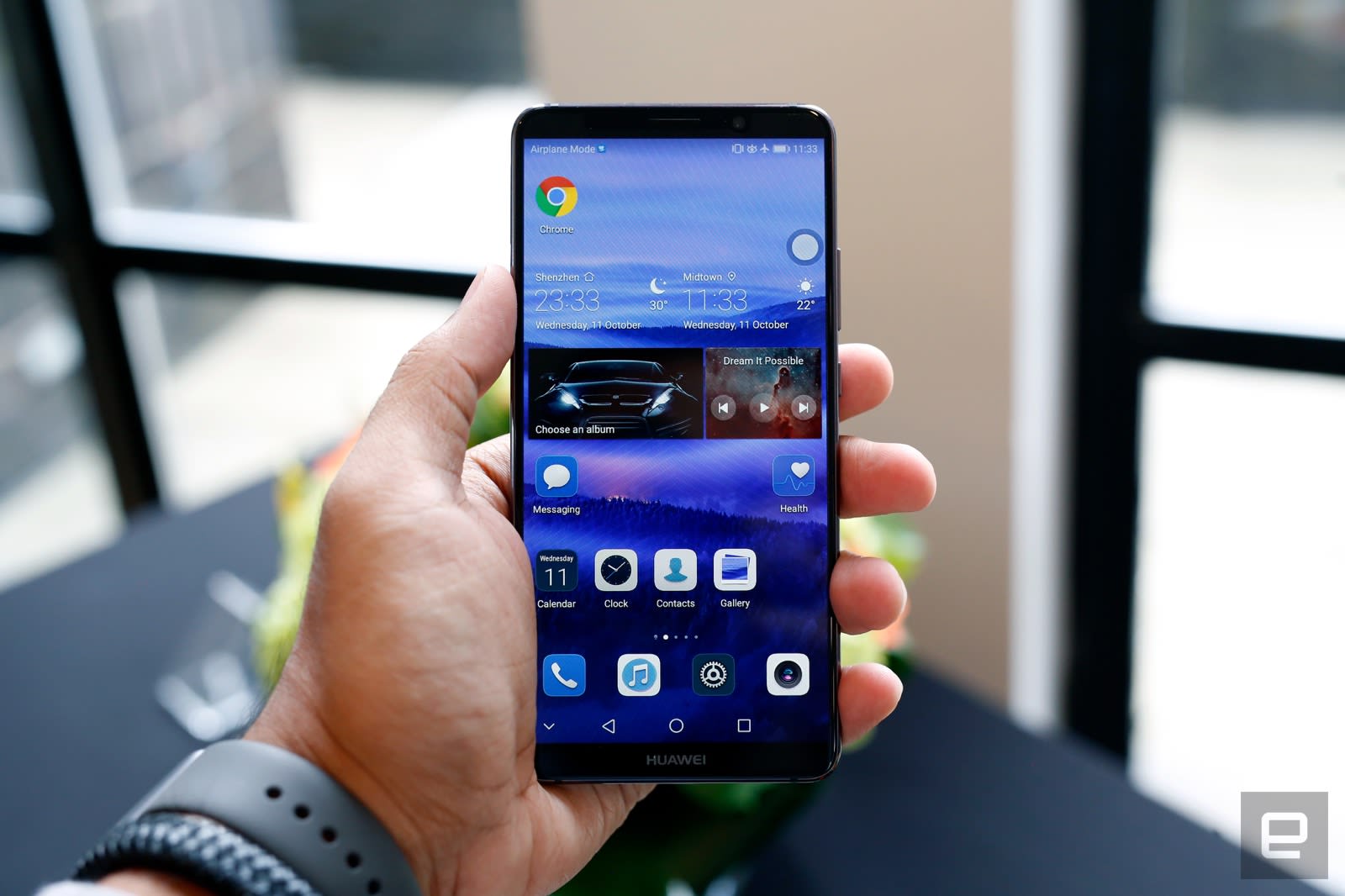 Other differences between the two phones include RAM and storage capacity, as well as the type of LTE radio. The Mate 10 has 4GB of RAM and 64GB of storage, while the Mate 10 Pro has 6GB of memory and 128GB of space. To compensate for its lower capacity, the regular Mate 10 has a microSD slot but its bigger brother doesn't. The Pro also has a Cat 18 radio, which means it supports gigabit LTE speeds of up to 1.2GBps, while the smaller phone doesn't. Finally, the Mate's fingerprint sensor is built into the home button, while the Pro's is located on the rear under the cameras. All these differences considered, the Pro doesn't necessarily feel like the superior of the two; it has a slightly bigger and technically better screen, though I didn't notice a change in quality as I switched devices.

I eventually learned to tell the difference between the phones by their overall shape. The Mate 10, with its 16:9 aspect ratio, is wide and squat compared to the Pro, which has a ratio of 18:9. Like many of this year's flagship phones, the two Mates' displays stretch across the front for an "all-screen" effect with almost no bezel. Despite the different resolutions and display types, both phones appeared equally colorful and crisp though they seemed a little dim under direct sunlight. 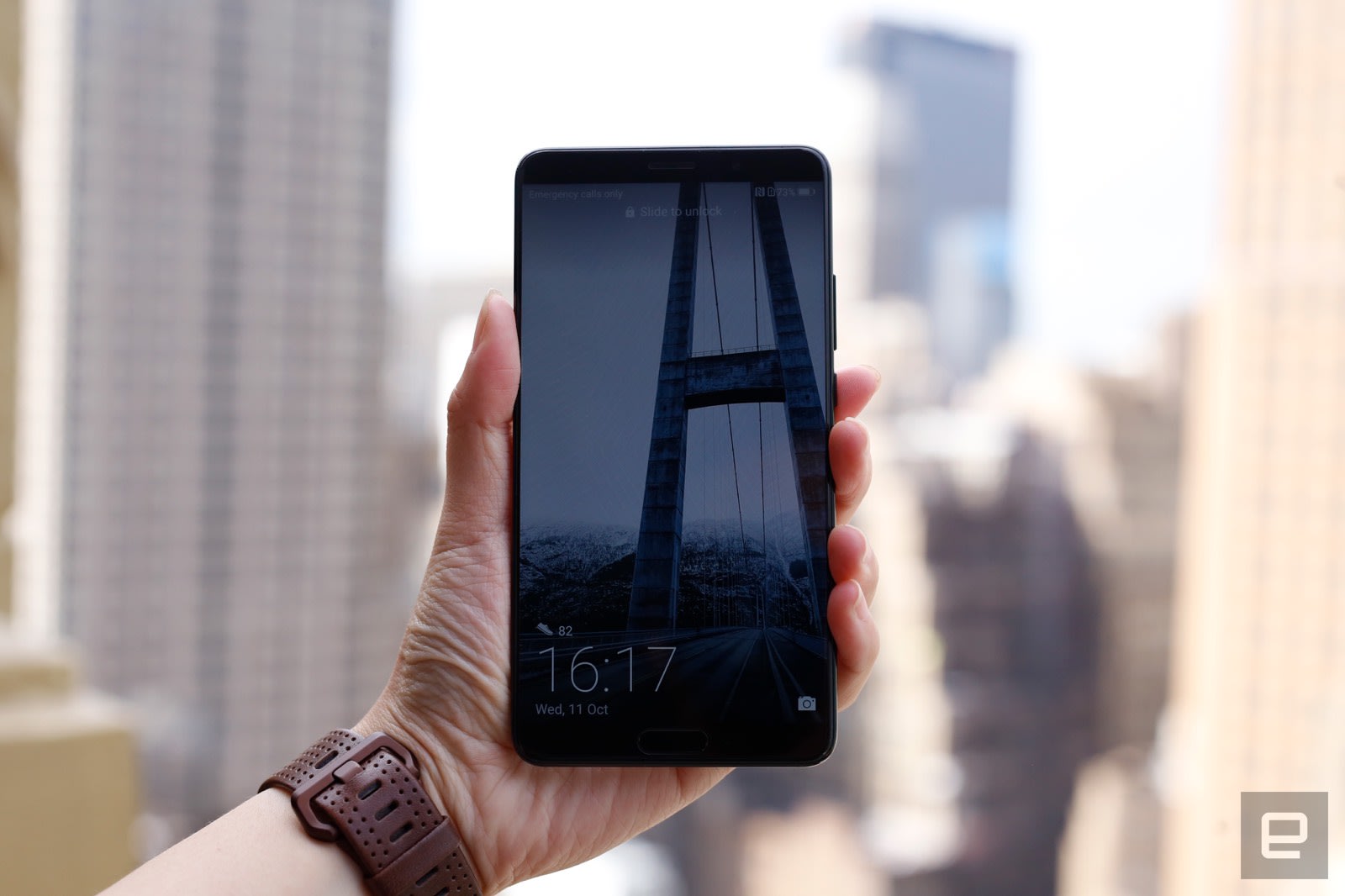 Both phones sport the same dual rear-camera setup, which Huawei co-engineered with Leica -- a partnership that has been ongoing for several years now. A 12-megapixel RGB camera is paired with a 20-megapixel monochrome sensor here, and both lenses feature apertures of up to f/1.6 -- which is the largest on smartphones to date, alongside LG's similarly equipped V30. The V30 uses a glass lens, though, which may deliver better image quality than the Mates, and LG uses wide angle and telephoto lenses instead of color and monochrome sensors. Still, the Mate 10 phones yielded lovely pictures with vivid colors and sharp details.

That's thanks in part to Huawei's AI in the native camera app. When you point the Mate 10's camera at an object, it recognizes the subject and automatically adjusts the settings. It'll not only tweak capture settings like ISO, exposure compensation and white balance in real time, but post-processing effects as well. I aimed the phone at some cupcakes on a plate, and a food icon appeared at the bottom left of the screen. The phone then bumped up the saturation to make the colors richer. 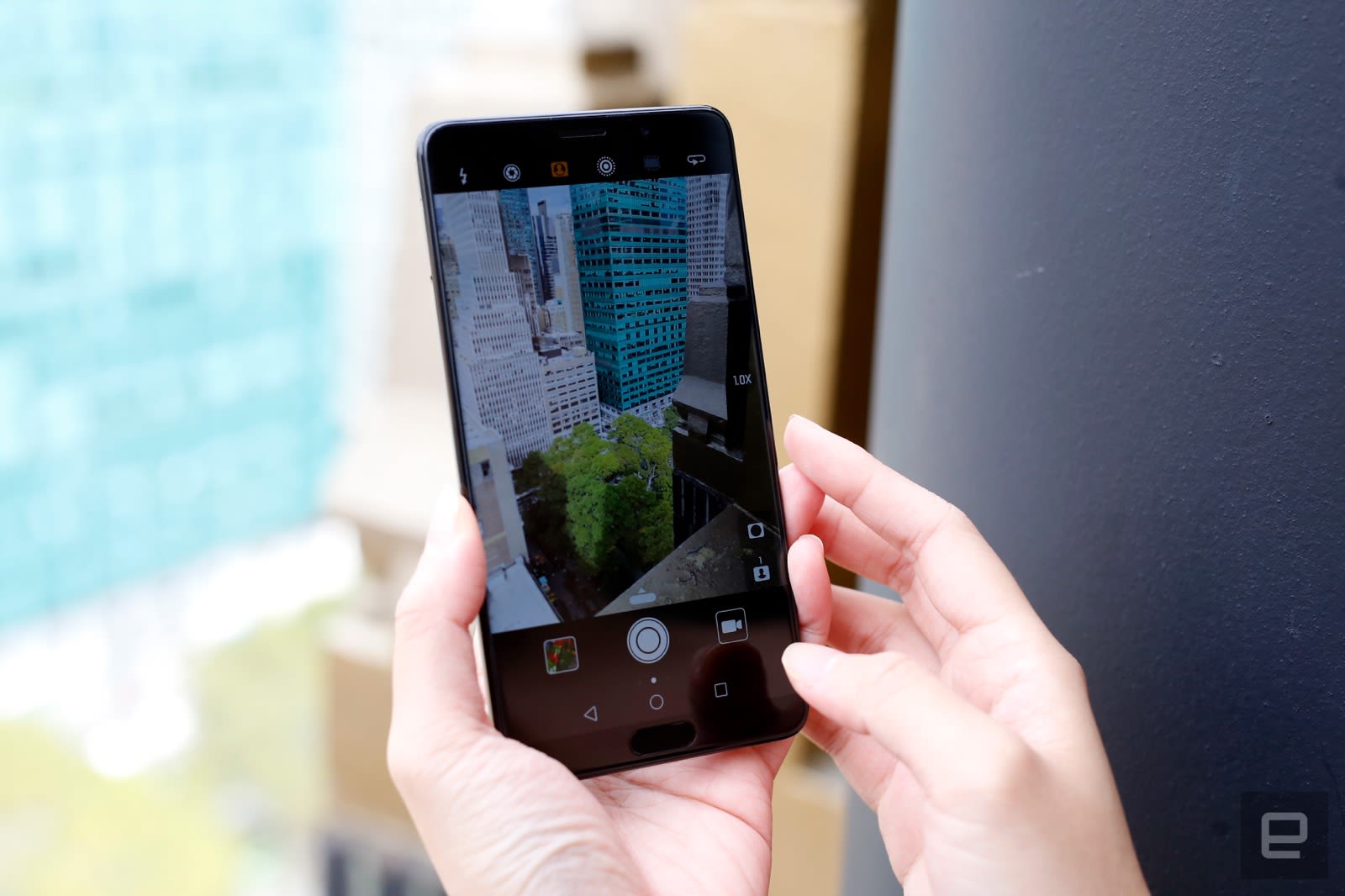 Huawei says the camera can recognize up to 13 scenes right now, including landscapes, low-light, portrait, flower, sunset, snow, cat, dog and text. I don't know why there are different settings for dogs and cats (Huawei has yet to answer my question on this), and I unfortunately didn't get to try the camera out on those animals. But during my demo, the Mate 10 phones accurately distinguished between people, food, flowers and landscapes. Over time, Huawei says the AI-powered model will evolve so that it recognizes more scenes and learns to identify more objects. The company will train its AI using users' photos in the cloud, and then push out updates periodically.

I was impressed by how quickly the cameras recognized things. An icon for the detected object appeared almost instantly after I pointed the phone at it, and even when there was a delay, it was never longer than a second. This is likely due to the Mate 10's Kirin 970 CPU, which carries a dedicated neural processing unit (NPU) to manage AI-based tasks. While the graphics processing unit handles things like rendering the image on your viewfinder and the main processing unit takes care of saving the image to your phone or capturing metadata, the NPU focuses on processes like object recognition. On other chipsets without an NPU, the latter task would be slower since it would be performed by another unit that's already in use. The Mate 10's 8-megapixel front camera doesn't support scene recognition, but it does have a Portrait-mode feature for bokeh in your selfies. Unlike this year's Huawei P10, which also features Portrait mode on the front cameras, the Mate 10 uses AI to better identify faces in your picture to apply the background blur more precisely. This was hit or miss during my demo; sometimes it recognized my coworker's face next to mine and adjusted the blur to surround him. Other times, it blurred out his head or parts of his hairline. Still, this is an improvement over the P10, which routinely blurred out my friends' faces in my group selfies.

The Kirin 970 chip offers other benefits as well. In addition to improving overall performance by pre-allocating resources to apps it predicts you'll launch, the NPU can also be used by third-party apps to speed up machine learning tasks. Developers can choose to tap the NPU by using Huawei's own API for the Kirin 970, Google's TensorFlow Lite or Facebook's Caffe 2 AI frameworks. So far, Microsoft has updated its Translator app to make use of the NPU to speed up the translation of signs. I tried this out on some Chinese sentences that Huawei placed around its demo area, and the process was indeed speedy. Since I've never used Microsoft Translator on another phone, I can't say if it is faster than before. 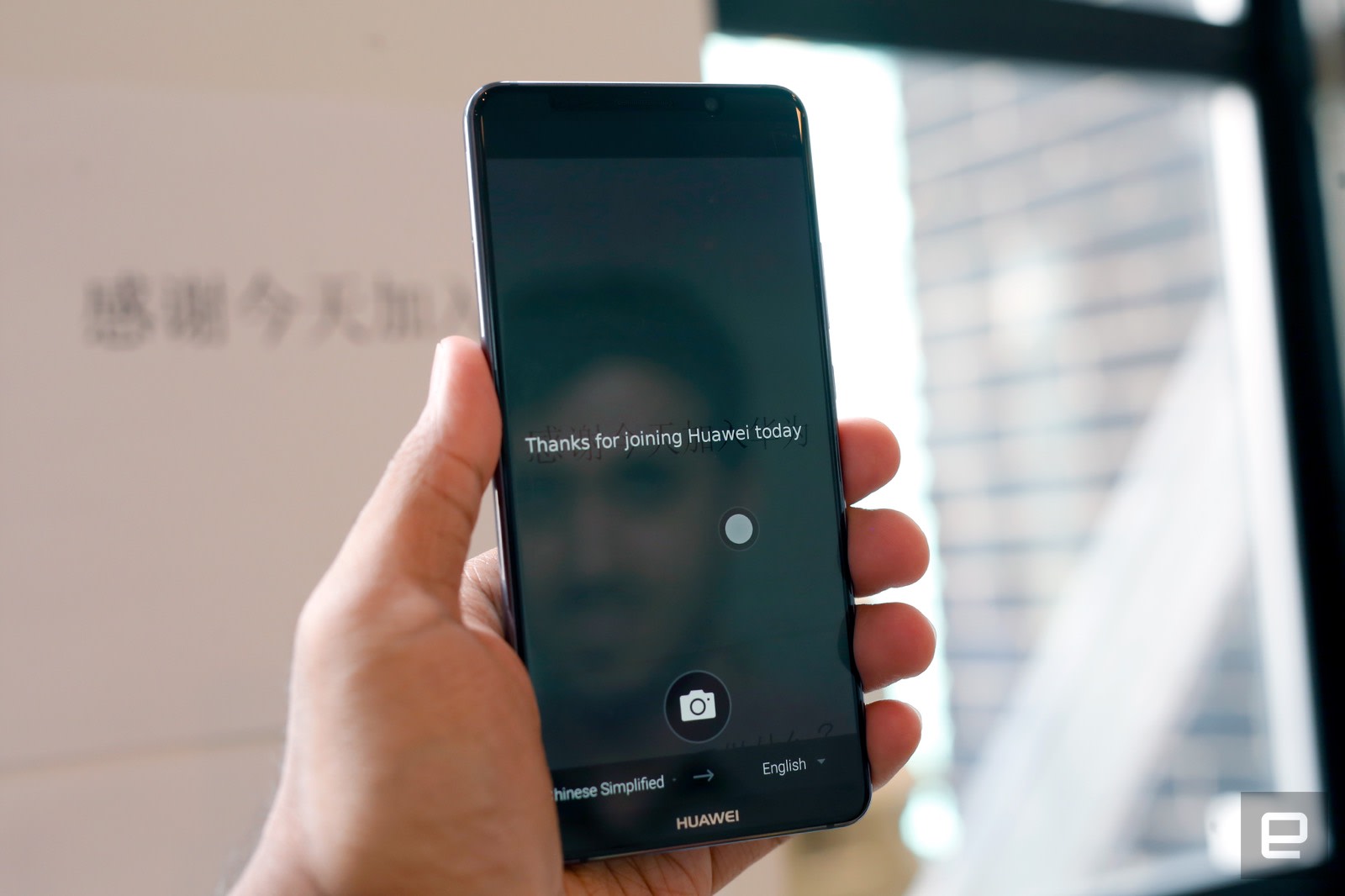 Few other apps are tapping the NPU at the moment, so I couldn't see if there would be other performance benefits during my demo.

The rest of the phone's improvements are less exciting. The Mate 10 will run Android 8.0 Oreo with Huawei's EMUI 8.0 skin, which has new features like a floating navigational button for easier one-handed control and the option to open incoming notifications in split screen when you're viewing a full-screen video or playing a game.

Both the Mate 10 and the 10 Pro pack large 4,000mAh batteries, which can be recharged up to 58 percent in 30 minutes. The new flagships are also the first phone to be "end to end" certified for battery safety by German certification organization TÜV Rheinland, meaning the cells are tested on their own as well as inside the phones. 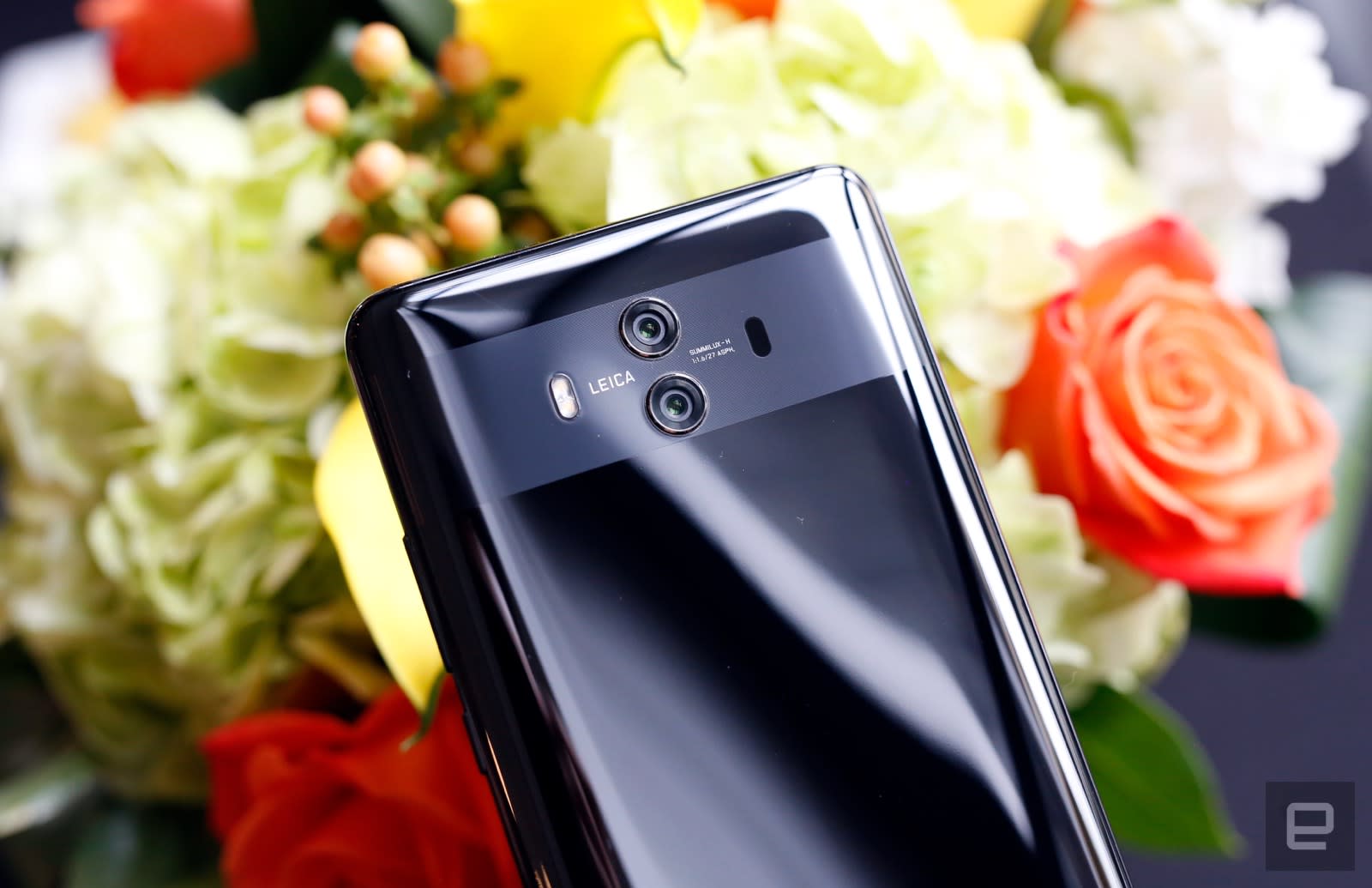 All told, the Mate 10 and Mate 10 Pro represent a refined focus for Huawei. While it continues to add popular features like all-screen displays and dual cameras to its flagships, Huawei is showing that it is capable of innovating in its own products. Concepts like the AI camera and NPU are not only novel, but helpful. Even though it's too early to tell how they'll perform in the real world, the new Mates already provide an intriguing preview of how well-executed AI applications can benefit users.

Update: We just received some first pricing info for the Mate 10. It'll start at €699 for the standard model, while the Mate 10 Pro will come in at €799. The Porsche Design Mate 10 will cost €1,395. W're still waiting on US pricing, but we should find that out sooner than later. At least this gives us a general idea of how much these handsets will cost.

In this article: androidoreo, gadgetry, gadgets, gear, huawei, huaweimate10, mobile, smartphone
All products recommended by Engadget are selected by our editorial team, independent of our parent company. Some of our stories include affiliate links. If you buy something through one of these links, we may earn an affiliate commission.