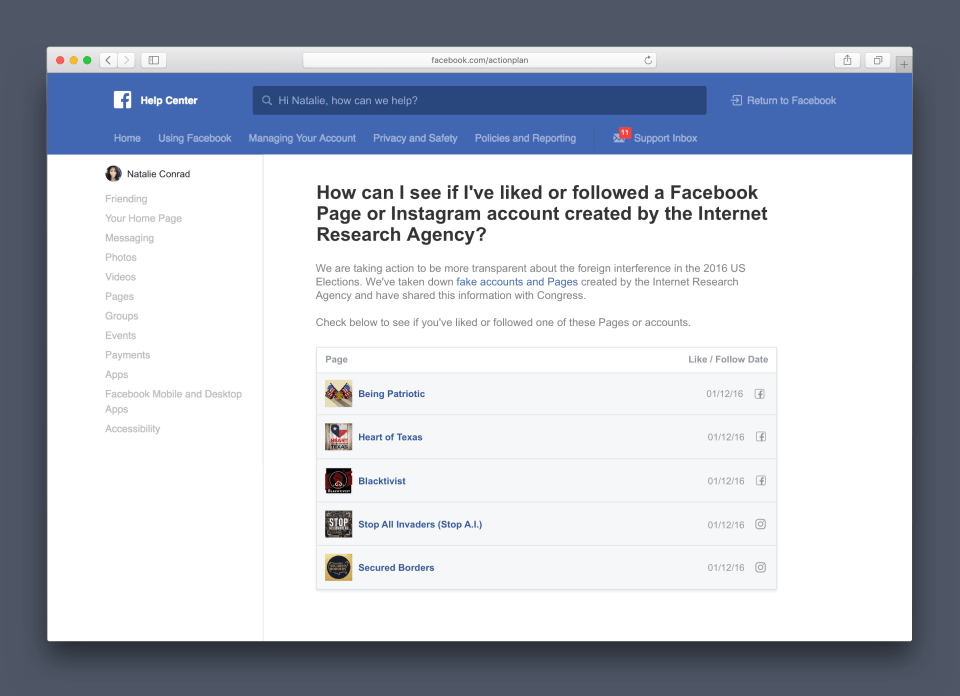 As part of its ongoing transparency efforts on Russian activity, Facebook today revealed that it will soon let users find out if they liked or followed pages created by the Internet Research Agency between January 2015 and August 2017. The company said it plans to roll out the tool by the end of this year, which is going to live in the Facebook Help Center and will also include information about Instagram accounts.

"It is important that people understand how foreign actors tried to sow division and mistrust using Facebook before and after the 2016 US election," Facebook said in a blog post. "That's why as we have discovered information, we have continually come forward to share it publicly and have provided it to congressional investigators."

Last month, Facebook announced that Russian influence had reached 126 million people on its platform -- and that doesn't include the additional 20 million who were reportedly exposed on Instagram. The company's General Counsel, Colin Stretch, has since testified before a US House of Representatives committee investigating Russia's meddling in the 2016 US Presidential Election and said that the social network is "deeply concerned about all these threats."

Stretch added that the social network is doubling its engineering efforts, hiring more ad reviewers and requiring more information from political advertisers to crack down on these "bad actors." It won't be long before you can find out whether or not you were fooled by one of them.

"During our open hearing with Facebook, Twitter and Google earlier this month, we asked them to notify their users if they had been targeted by or seen content as part of the Russian active measures campaign. The move by Facebook to allow users to see if they liked or followed pages created by the Kremlin-linked Internet Research Agency is a very positive step.

We look forward to additional steps by the companies to improve transparency with respect to Russian abuse of their platforms, and urge them to furnish a joint report on how Russia used these platforms to sow discord and influence the election."

In this article: ads, election, election2016, facebook, gear, instagram, internet, internetresearchagency, politics, russia, russian, trolls
All products recommended by Engadget are selected by our editorial team, independent of our parent company. Some of our stories include affiliate links. If you buy something through one of these links, we may earn an affiliate commission.