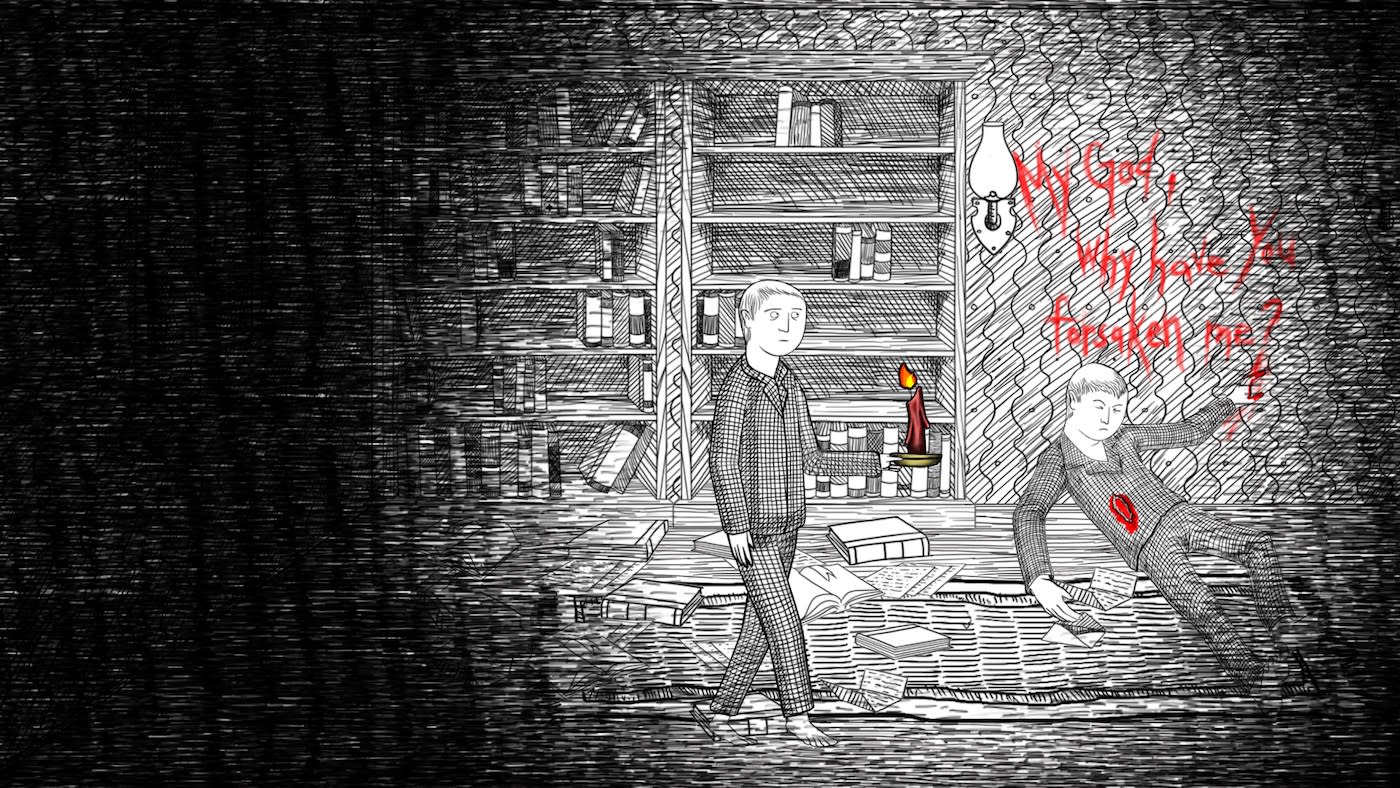 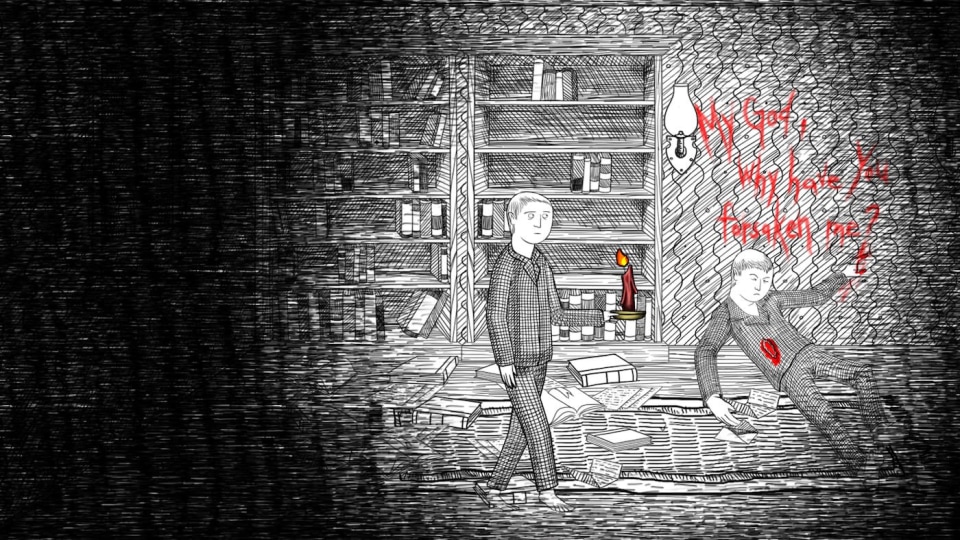 She stands in front of you, clutching a teddy bear to her chest. She can't be older than 8, with long, straight black hair and a frilled dress. You don't know her name, but she's smiling warmly. And then, suddenly, she isn't: Her doe eyes widen, white and afraid. Her mouth gapes and blood drips past her lips. You follow her gaze down -- a knife protrudes from her stomach, staining her dress bright red, blood dribbling into her socks and Mary Janes. A knife that your hands are grasping tightly.

This is how the video game Neverending Nightmares begins, and it's also the first scene in a manga of the same name that debuted last week. As a game, Neverending Nightmares is a chilling, powerful peek into the darkest thoughts of a person struggling with depression and intrusive thoughts. The protagonist, Thomas, is trapped in a hellscape loop, repeatedly waking up only to realize he's still in a terrible nightmare: Headless corpses are piled against black-and-white walls; bodies hang from meat hooks in a claustrophobic cell; Thomas pulls a vein from his wrist like a stray thread. So far, the manga is just as brazen in its depiction of suffering and death. It's done in the same Edward Gorey-esque art style, filled with scratchy black lines and explosions of red highlighting gruesome scenes of disembowelment, murder and torture. For creator Matt Gilgenbach, these scenes are the heart of Neverending Nightmares, though they're not gory for the sake of gore. They serve a profound purpose as he attempts to demonstrate the depth of his own depressive thoughts.

Neverending Nightmares spawned from a dark period in Gilgenbach's life, as described to Joystiq (now Engadget) in 2014: His game, Retrograde, had just bombed and he was financially downtrodden. He slipped into depression, something he'd faced earlier in his life. His mind began to fill with images of self-inflicted violence and he longed for an outlet to express the overwhelming nature of these thoughts.

"When I started thinking about how to represent my obsessive compulsive disorder, one of the main things I struggled with are intrusive thoughts, violent thoughts of self-harm," Gilgenbach says. "These were very upsetting, and as soon as I became comfortable with a particular image, my mind would dream up an even more intense and awful image that would make me miserable. I thought that Neverending Nightmares would be a great opportunity to bring those to life."

Gilgenbach was onto something there. Neverending Nightmares premiered on PC in 2014 and it's still relevant today, picking up new players and expanding to fresh platforms. Alongside the launch of the manga last week, Neverending Nightmares landed on Android and iOS with a sticker price of $4. The game is now available on Steam, PlayStation 4, Vita and mobile devices.

The prologue and first chapter of the manga are available now, for free, on Japanese artist forum Pixiv. The remaining eight chapters -- each readable in English, Japanese and simplified Chinese -- will roll out once a month through July, also for free.

Pixiv played a big role in making the manga happen. Gilgenbach hadn't seriously considered transforming his game into a comic book or any other medium, but once Neverending Nightmares hit PlayStation Network in Japan, it picked up a lot of interest on Pixiv. The company reached out to Gilgenbach with an offer to license his IP and create a manga.

"One of the most exciting things about the manga is that I can reach a different audience that might not be interested in the game," Gilgenbach says. "When I met with Pixiv early on, I stressed to them how important of an IP to me this was and how I wanted to ensure it stayed true to the theme of the original work. They were very receptive to this and worked with me on keeping the same theme as the game."

Developing the manga is a collaborative process: Gilgenbach doesn't have any experience in writing Japanese comic books himself, so he and Pixiv worked with a specialist on the script. The story itself, however, resides in Pixiv's hands.

"I feel that they have made the manga a bit faster paced, and added more gore and horror to the beginning of the work," Gilgenbach says. "It definitely changes the feeling, but I think it really works well for the medium. I get chills reading the manga, so I think they pulled off the horror effectively."

Gilgenbach is surprised to still be working on Neverending Nightmares after all these years. Its longevity is notable in the crowded independent marketplace to begin with, but it's especially impressive considering the game's dark subject matter and heaps of gore.

"I didn't expect it to continue to have interest at this point," Gilgenbach says. "I think because I set out to do something different and recreate my personal journey with mental illness thematically, it really resonates with a fanbase that is continuing to grow through word of mouth."

And, now, word of manga.

In this article: art, av, depression, design, gaming, horror, InfinitapGames, manga, MattGilgenbach, neverendingnightmares, personal computing, personalcomputing, Pixiv
All products recommended by Engadget are selected by our editorial team, independent of our parent company. Some of our stories include affiliate links. If you buy something through one of these links, we may earn an affiliate commission.