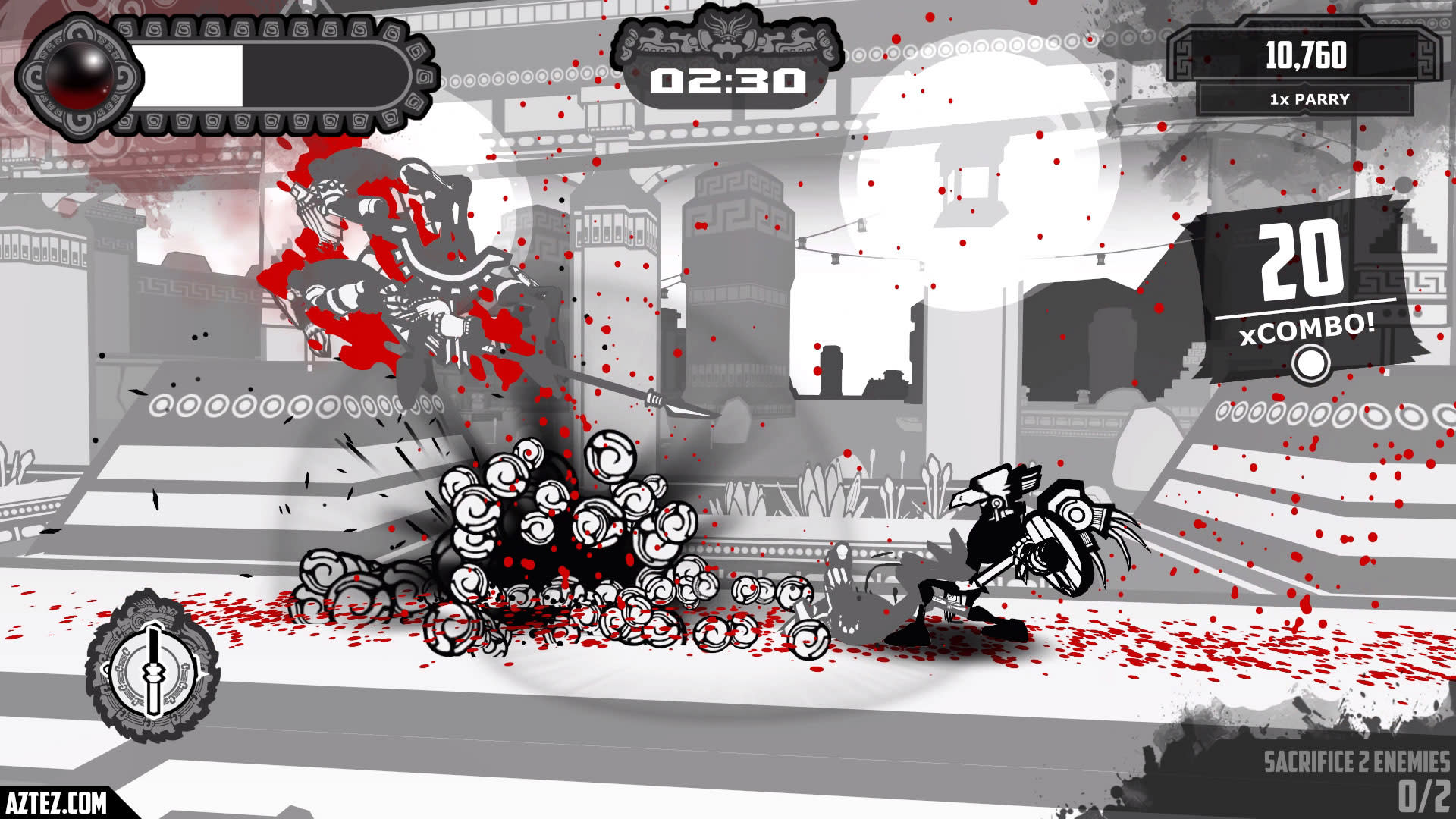 'Aztez': The bloody indie brawler that should've been big

'I know we're going to be OK, but everything blows right now.'

Imagine: It's 2012 and Matthew Wegner is sitting at his desk in the back of a one-bedroom apartment in Tempe, Arizona, pounding away at a keyboard. It's night, but thick black drapes are pulled over the window; the room is suffused with dim yellow light, casting sickly shadows over the papers tacked to the walls. Most of them are emblazoned with the name Aztez, depicting bloody battles among ancient Aztec warriors. Wegner's fingers fall still as he closes a line of code and reviews his work. His computer hums, hot.

A ball of blinding white light suddenly explodes in the middle of the room, shooting sparks to the ceiling and singeing the carpet -- Wegner jumps up and stares, wide-eyed, at the intrusion. As the glare fades, a familiar shape emerges. Wegner is looking at himself: a little older, a little more weathered, but definitely himself.

"Don't do Aztez!" the second Wegner says, frantic. "I'm you from five years in the future. Trust me, stop working on this game. It doesn't go well."

The original Wegner finds his voice. "But everyone says it's going to be great! We already have a lot of buzz."

"It's a trap. Quit Aztez. Now!" The light returns and swiftly envelops the second Wegner before popping out of existence entirely. His final words reverberate around the tiny, smoking room. Wegner blinks and shakes away his shock. He pulls out his chair and sits down. Moments later, his fingers are flying over the keyboard again, coding combat combos into Aztez. "If, five years ago, future-me were to teleport into the room and be like, 'I'm Matthew from the future -- Aztez, just get off of it, don't do it,' I'd probably still finish it," Wegner says, back in the real world.

"Yeah, I would too," his partner, Ben Ruiz, agrees. Ruiz and Wegner are the founding (and only) members of Team Colorblind, an independent game-development studio based in the Phoenix area. Their first game, Aztez, hit Steam in August after seven years of work and five years of positive public attention. It's a stylish brawler with deep strategy elements set in the ancient Aztec empire, featuring black-and-white environments splattered with bright red blood.

During development, Ruiz and Wegner rode a rising wave of love for indie games as consumers discovered the depth of experiences available outside the big-budget, DLC-obsessed, AAA marketplace. They rode that indie wave until it crashed. It's difficult to say exactly when, because they didn't feel the impact -- they were trapped in a development bubble, building a game that the media, their friends and fellow developers all said would perform wonderfully once it was out in the wild.

At least, that's what they said five years ago.

The video-game industry evolves rapidly, constantly adopting new technologies and taking advantage of fresh distribution methods. As Team Colorblind continued to work, the indie market lost its new-toy sheen and became an established, overcrowded haven for anyone with GameMaker and an idea. "If I was paying attention to Steam, maybe I wouldn't be so blindsided by what happened, but I'm also not necessarily sure what I would've done differently," Ruiz says. "If I'd have known like, oh, it's a saturated market now -- what the fuck do you do?"

After seven years, Aztez emerged from its development bubble -- and it bombed. This time around, Ruiz and Wegner definitely felt the impact.

Ruiz chose Aztez's release date extremely carefully. He knew they didn't want to launch during the holiday season, which is generally dominated by the AAA money machine, so he looked at the summer. He scoured the charts of upcoming Steam releases, searching for a day without any big-name games. August 1st looked good. He locked it in.

"There were 40 other games that launched on August 1st," Wegner says. One of those games was Slime Rancher, an adorable first-person title that had generated a rabid fanbase while it was still in Early Access. Another was Tacoma, the new game from the team behind indie darling Gone Home. Neither of these had shown up on the new-release charts Ruiz had studied.

"If I would've seen Slime Rancher, I would've been like fuck it, we're going to wait a month," Ruiz says. "Because there's no reason to compete with that." Slime Rancher didn't single-handedly destroy Aztez's chances at success. However, with 39 other new games also hitting Steam that day, it was difficult for any title to truly stand out. Even an eye-catching brawler with a notable amount of name recognition.

This is a different world than the one Ruiz and Wegner operated in when they started working on Aztez in 2010. Back then, Steam was a curated space, where employees worked directly with developers to approve their games and get them on the store. A handful of titles went live every week, and indie developers lucky enough to secure a Steam deal could generally bank on that release to see them through the fiscal year. Getting on Steam was like hitting the jackpot.

That changed in 2012. Indie games were all the rage, development tools were becoming increasingly accessible, and there were hundreds of new titles ready to be distributed every day. Steam set up Greenlight, a system where players themselves approved indie games for the store, and Early Access, where developers could publish games-in-progress for community feedback, allowing them to feed the hype beast from day one.

Meanwhile, Ruiz and Wegner continued working on Aztez, heads down, not paying much attention to the wider marketplace as it tilted around them. They had five years to go. Today, Greenlight is dead, but the Early Access model has spread to other platforms, including consoles.

"It's almost like in the last five years, everyone was on Steam, and then it refractured and the consoles got markets back again," Ruiz says. "Five years ago everyone was on Steam because new consoles would come out and they were like $1,000, right? So, it's just this sin wave apparently, because it's like oh yeah, that's what happened with the previous generation, too." This tug-of-war between Steam and consoles continues today. Right now, it feels like there's more opportunity for indie games to succeed on the PlayStation 4 or Switch ("They don't say Xbox One. I don't think anyone owns those," Ruiz adds) than Steam. However, PS4 has been the reigning indie hub for a few years and its dominance might be coming to an end. Managerial shakeups have recently altered the company's approach to smaller studios -- Sony is losing the indie market and the Switch alone can't support this ecosystem on behalf of all three major consoles. The momentum is poised to shift back toward Steam any time now, but the platform still has to deal with its oversaturation problem.

"I think we came out on the bad part of that roller coaster because you know, there's a billion indie games that come out on Steam every single day," Ruiz says.

Ruiz and Wegner aren't making any money on Aztez and they've started picking up contract work again to pay the bills.

Back in 2010, they worked on the game exclusively on nights and weekends, but they managed to secure some investors early on and Ruiz has been building Aztez full-time since then. Wegner continued doing contract work and focused on the game in his spare time -- over the past year, however, Wegner was full-time on Aztez as well.

Colorblind has to repay its investors before they see a cent out of Aztez. So far, they've sold roughly 2,000 copies of the game across Steam and other, smaller distributors. It sells for $20 when it's not on sale. All of that cash -- real and potential -- is being funneled to Aztez's investors for now.

"Then I'll put it towards my medical class for being a 40 year old."

Ruiz and Wegner did a lot of things right when it comes to savvy indie distribution -- Ruiz sent out press releases, published YouTube videos and got some high-profile streamers to play Aztez -- but they were a few years behind the market. They launched on Steam when consoles might have been a better move.

Now they're working on PS4, Xbox One and Switch versions of the game. Aztez is actually running on all of those platforms, but it probably won't launch until early next year, after the holiday rush.

By that time, it's hard to say where the market's energy will be. Aztez could easily miss out on the console bubble, too. For instance, plenty of players today are excited about indie games on the Switch, but there's no telling how long that interest will last.

"Maybe by the time we launch on Switch, you know, in whatever January, February, we will also be amongst the crowd again," Ruiz says.

Ruiz and Wegner know all it takes is one good day to set Aztez on the path to financial solvency, and they know the console releases could be major. They're also painfully aware all of their plans could fail spectacularly. It's a tense waiting game. "We're in the part of the metaphor where, like, we hit the other car or the boundary, and flew out the windshield, and our faces and arms just ate street," Ruiz says. "I kind of feel like we're still in the street. So intellectually it's like OK, we're alive, I know we'll be alive, this isn't going to kill us. ... I know we're going to be OK, but everything blows right now. Just blood everywhere, like oh, dang it."

Ruiz and Wegner may be disappointed, bleeding and sore -- but they're not defeated.

"Someday, there could be the spark that becomes the fire, and all of the sudden it gets into the right hands, and then the conversation starts and then it's like oh, fuck," Ruiz says. "We sold 10,000 units today and we did the next day, and then all of a sudden we're a normal, successful game developer. That could happen at any time. But the fact that that is the nature of the universe is just torture. Because every day it doesn't happen. And you know it's not going to happen. ... Once the consoles are done, I'm going to be relieved to let that fall out of my brain. But as long as that's in the future I can't abandon it, I can't abandon the idea that like, oh, it might turn around."