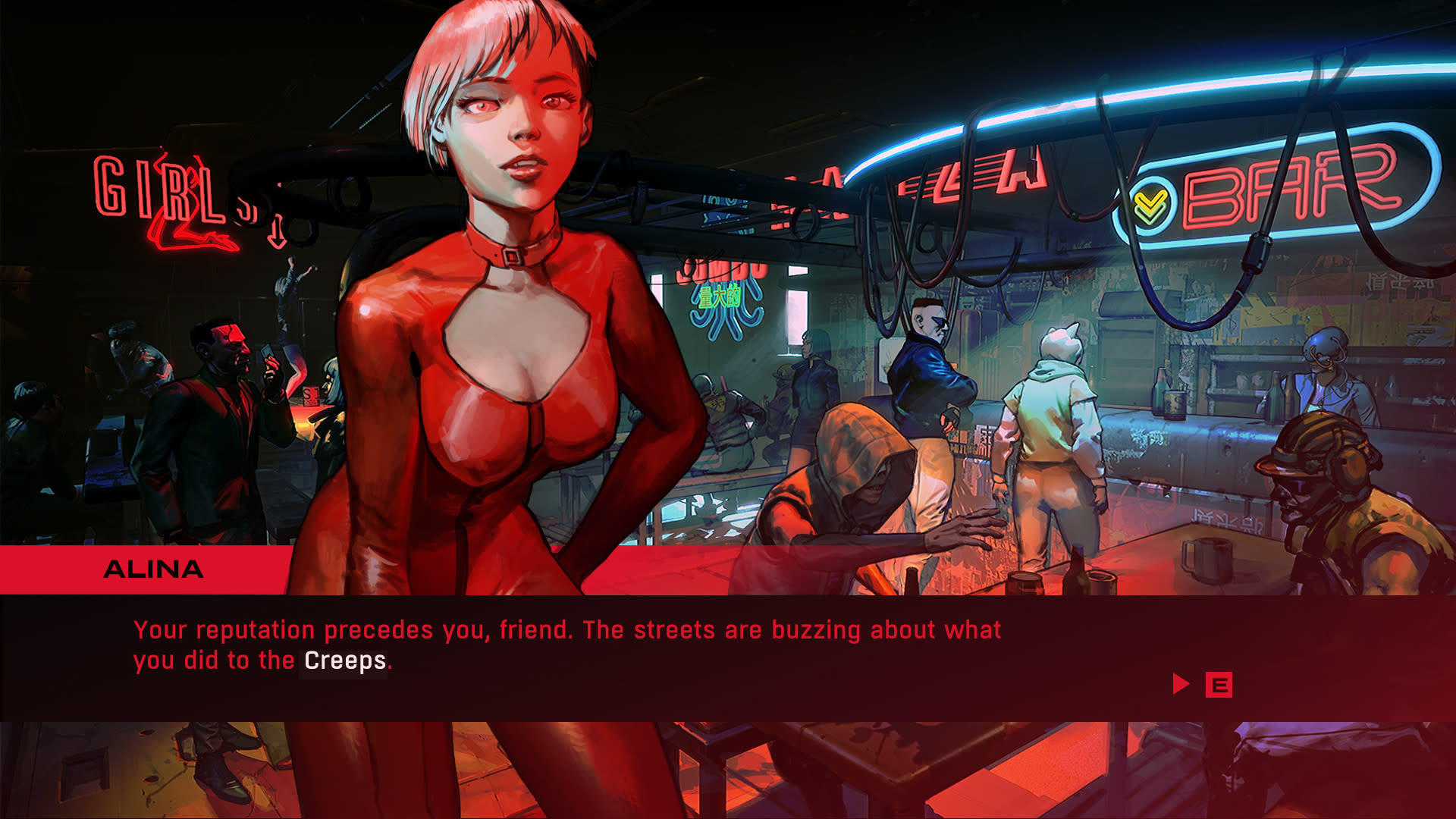 The evolution of video-game cyberpunk: 'Ruiner' and 'Tacoma'

What does it even mean, cyberpunk?"

It's a strange question coming from Magdalena Tomkowicz, the narrative designer of Ruiner, a top-down action game that takes place in an anime-inspired cyberpunk world. It just landed on Steam, PlayStation 4 and Xbox One this week from Polish studio Reikon Games, but fans of gritty sci-fi shooters have been looking forward to this one for months.

The thing is, Tomkowicz and Creative Director Benedykt Szneider never intended to create a cyberpunk game. They're simply products of the 1980s, pulling inspiration from their favorite childhood stories -- Alien, Die Hard, Ghost in the Shell -- to create something of their own. Tomkowicz is also a former journalist who covered emerging technology and consumer trends, and her professional curiosity informed Ruiner's aesthetic far more than any desire to re-create the world of, say, Blade Runner.

Besides, the traditional Blade Runner version of cyberpunk -- dense, dark city streets coated in smog and grime, eerily illuminated by walls of neon -- is out of touch with today's reality, according to Szneider and Tomkowicz. This aesthetic made sense in the '80s, but sci-fi is all about extrapolating from current technological and social trends, not clinging to 35-year-old ideas about the future. Blade Runner completely missed the advent of cellphones, after all.

"It's like it's actually a retro-futuristic genre and something that is locked in its bubble," Tomkowicz says. Reikon isn't the only video-game studio playing with the definition of cyberpunk, pressing against its boundaries and forcing it to expand. On the other side of the cyberpunk spectrum sits Tacoma, Fullbright's follow-up to the critically acclaimed exploration game Gone Home. Tacoma doesn't scream cyberpunk in the same way Ruiner does -- it's brighter, filled with soft light and believable depictions of life on a space station in the year 2088. But, it tells a dark tale of corporate-driven inhumanity and greed, much like traditional cyberpunk stories.

"If somebody were to make the argument, I could see something like Tacoma legitimately being 2017 cyberpunk," he says. "It doesn't come from the '80s, and it's not trying to reach back and look like Blade Runner or something. But I feel like we're in that realm of talking about the underlying issues that led to that movement that established the term." Visually, Tacoma and Ruiner are opposites, but they both take a contemporary approach to cyberpunk -- one that isn't restricted to blue and pink neon. Their developers share similar philosophies about the evolution of cyberpunk and its place as a storytelling tool in the modern gaming world.

"It's not very fun to make a game or a story about technology," Szneider says. "We tried to focus on the people. We will always have people who use the technology in the wrong way and take advantage of others, and that's what makes a story. It will never be black-and-white in this regard."

Apple doesn't exist in Tacoma. The year is 2088, and you're aboard an abandoned, state-of-the-art space station haunted by hologram recordings of the former crew. In this vision of the future, Google, Amazon and Tesla are all still around -- Elon Musk even became president of South Africa at one point. These companies (and presidents) aren't pivotal to the game; their inclusion is subtle. They exist as set pieces, grounding the story in a relatable reality and a likely future.

A future that doesn't include one of Silicon Valley's biggest names.

"Apple never comes up," Gaynor says. "I don't know if that means anything. It wasn't really conscious." Developers at Fullbright didn't have a meeting where they decided which technology companies were going to survive in Tacoma's future -- instead, they trusted their guts. And, apparently, their instincts were Apple-intolerant. Something about the company didn't feel as stable as Google or Amazon, so it simply didn't make it into the game.

This process -- extrapolating based on the innate energy of a specific company -- is crucial to creating speculative fiction, and it's emblematic of the cyberpunk genre specifically. For instance, the massive moving billboards in Blade Runner are legendary for their time-capsule-like quality, proudly displaying ads for companies that faded out of existence decades ago. The film was shot in 1982, but it depicts the year 2019 -- and now that we're closing in on this supposed reality, it's jarring to see the Pan Am and Atari logos glowing over grimy, unfamiliar Los Angeles streets.

This isn't a failure on cyberpunk's part. Despite its propensity to imagine technological systems that become mainstream staples just years later, the genre has never pretended to predict the future. Even Neuromancer author William Gibson, the man who popularized the term "cyberspace" in 1984, has long denied his status as a techno-prophet. This is after his books laid down the foundation for modern internet communication, reality television, nanotechnology and dozens of other ideas we take for granted today.

"I was never able to predict," Gibson told GQ in 2014. "But I could sort of curate what had already happened." That's how Gaynor sees cyberpunk today. Even though these stories are set in futures that feel real, they're actually a commentary on current events, not an attempt at prophecy.

"I think that there's this underlying element of cyberpunk which is actually more ground-level, technologically based speculative fiction," Gaynor says. "It's not high sci-fi, and it doesn't have fantastical elements. It's about extrapolating our current consumer and enterprise and military technological context into, 'What is this like 20 minutes into the future?'"

Over the three years it took to build Tacoma, Gaynor and the Fullbright team focused on the labor market. Wisconsin Gov. Scott Walker was pushing a harsh anti-teachers' union agenda, corporations in the United States were making moves to corral more power and citizens were willingly feeding their personal information to faceless organizations. It felt like the perfect setup for a cyberpunk-style story.

"We were reacting as much to things like the pendulum swinging back toward corporate power and away from organized labor, and away from workers having rights and being able to exert some influence on the economies of these different industries," Gaynor says. "Things like the gig economy starting to deregulate and decentralize things like taxicabs and hotels, which, on the one hand, that's cool for convenience as far as the end-user goes, but also it reshuffles the power back, basically completely, into the hands of the company that owns the app that normal people are engaging with to go about their business. It gets around regulations that have been established over the course of decades." Ruiner and the great disconnect

Perhaps it's a sign of the times, but Ruiner is concerned with corporate overreach and humanity's willful disregard for privacy, as well. From a top-down perspective, you dash through a hellish industrial landscape in the year 2091, shooting and dodging enemies on a quest to save your kidnapped brother. This rampage is your only option, as corrupt companies and the government rule over a technologically advanced society that places little value on human life.

That last part isn't speculative, to Tomkowicz -- it's the manifestation of a real, modern-day situation she researched as a journalist.

"We think that we've gotten rid of slavery, but it's still very strong in the world," she says. "If slavery was a country, it would have the population of Canada.... So slavery is present in everyday things, we just don't know it because it's hidden in the chain of supply."

Szneider jumps in here to clarify an important feature of Ruiner. Though it's a deeply thought-out game with a dense world, it isn't trying to preach at anyone. These messages about corruption and slavery are touches to the game, not its focus. "It's present in games, a bit, the serious tone," Szneider says. "It's unnecessary. We don't like that. We tried to have a solid background, a really interesting background for interviews, but it's an action-oriented game. It should be fun. It should have this energy in it, not be played like a lecture or something."

At its core, Ruiner is a rapid-fire action game set in a beautifully extrapolated world of murder, hacking and humanity. But behind that facade, it offers a deeper, classically cyberpunk narrative. Tomkowicz says at the heart of all cyberpunk stories lies the same driving notion, and Ruiner is no different.

"Human disconnection is the universal thing," she says. "You have very little direct connection among human beings. It's always through a thing, through an object, through a technology. The thing that we say, we play with human lives and human lives become the object or the fuel for entertainment."

But, again, cyberpunk isn't inherently predictive. Developers at Reikon may have crafted a terrifying slice of potential reality, but that doesn't mean they think this world will actually manifest one day. In his personal life, Szneider actually sees the potential for technology to unite humanity rather than push people apart.

"I don't have any dark visions about technology overtaking [humanity]. To be honest, I'm very optimistic about the future of technology," he says. "Let's, for example, say that the internet will free us and let us get out of the city because we will not need to be in this confined space with other people, which is a bit unnatural, I think." Blade Runner proposes a dark, depressing future built on the back of technology, as does Ruiner -- but both Szneider and Tomkowicz know that's not the only potential outcome. Technology can and does improve lives across the globe, even in cities that look a lot like Ridley Scott's Los Angeles, at least on paper.

Szneider and Tomkowicz were recently in Busan, South Korea, for a convention, and they describe a bustling high-tech city with enormous apartments buildings nestled among the hills. However, they say, there was no disconnect among the people on the ground. Instead, it felt like a close-knit town, buzzing with people laughing, crying and living in the various restaurants, bars and shops.

In Busan, Blade Runner's vision of the future feels incredibly far away.

"So I don't know if bringing the fear and the loneliness and this kind of weird sensation, bringing it back -- I think it's kind of out of place right now," Tomkowicz says. "Because people feel more at home with the stuff that they have, their mobile phones -- it connects everyone on the planet."

All products recommended by Engadget are selected by our editorial team, independent of our parent company. Some of our stories include affiliate links. If you buy something through one of these links, we may earn an affiliate commission. All prices are correct at the time of publishing.
View All Comments
The evolution of video-game cyberpunk: 'Ruiner' and 'Tacoma'