The Mustang personifies the American muscle car. Folks who have zero interest in the Camaro and Charger are in awe of the design of the Ford that landed on roads in 1964. Besides a few design hiccups (ugh, the Mustang 2), it's been coveted, sung about, restored -- and as of 2016 -- purchased more than 9.5 million times. But, it's never been that smart -- until now. The 2018 Mustang GT Fastback Premium is loud, fast and sure to put a smile on the face of its fans. The growling (and it's nearly always growling) car has 460 horsepower and 420 pounds of torque supplied by a 5.0 liter V8. Its base price is $39,000 but the test car given to us by Ford was tricked out with the GT performance package, MagneRide damping suspension and a tuned exhaust, which bumps the price up to $49,000.

But all that cash (and it's a lot of cash) doesn't just pay for brute force. It also powers a car that's smarter than you would expect. While the exterior, tire-spinning power and roar of the car make it seem like a big dumb (but fun) animal, the pony has gotten an impressive tech upgrade. 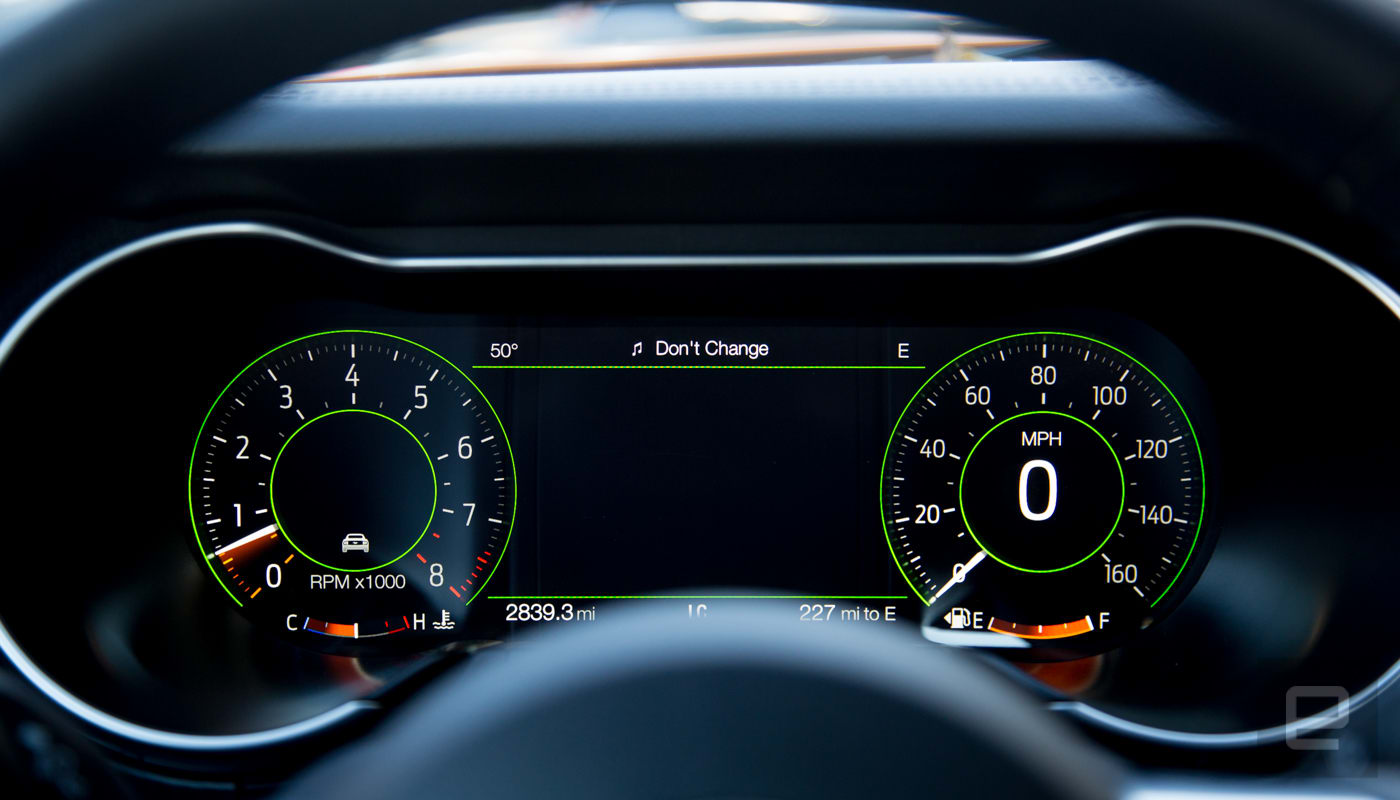 The highlight is the 12-inch all-digital dashboard display. Ford has taken the simplicity of its muscle car's dashboard cluster and translated it into something that's easy to read, navigate and has wealth of features that unleash, or tame, the beast under the hood.

All of these features are accessible via the Mustang logo on the steering wheel. Press it and you're dropped into a menu system filled with ways to customize the car. From adjusting the color scheme of the dash cluster to raising the volume of the exhaust system -- all of it is a few taps away.

There's even the ability to schedule the car to start quietly instead of unleashing a thundering roar when the start button is depressed. Something that will make your neighbors and family happy when you have to leave for work at 5 am. Basically, you're telling the car to use its inside voice. 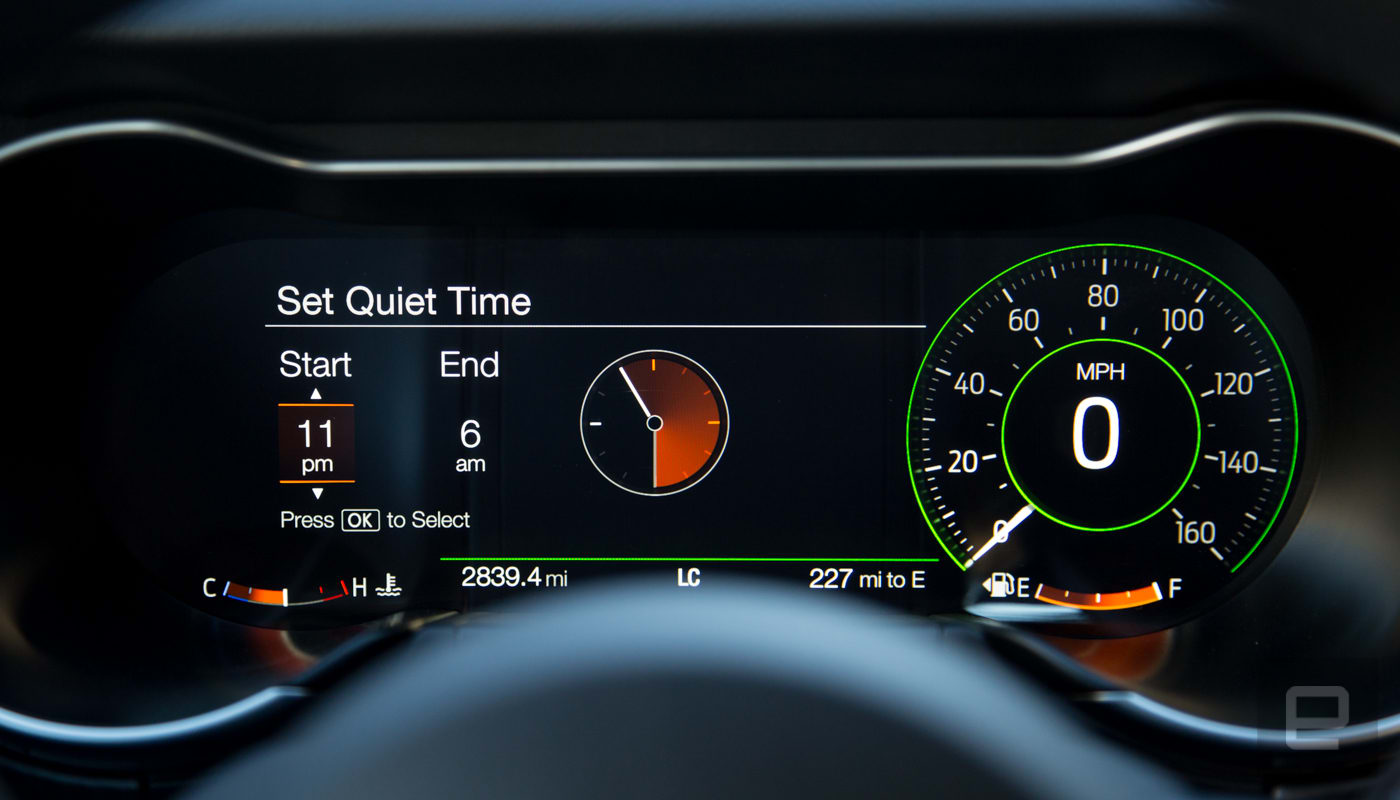 The in-dash mode selection system also makes it simpler to drive, well, like a maniac. The car's five modes include normal, sport, snow and ice, track and drag strip. That's right, there's a drag strip mode for those nights when you're at the track racing against Camaros, Teslas, Corvettes and tricked-out Hondas. In this mode, with launch control on, Ford states the Mustang can do zero to 60 in under four seconds. It's crazy quick. By comparison, the Honda Civic Sport goes from zero to 60 in 7.5 seconds.

In track mode, the traction control is off by default, which makes for some fun rear-wheel-drive drifting that you should only do on a track. In fact, both of these modes come with a warning to check the manual to see how they affect the car. They take an already aggressive car and focus that power. But for the average driver, you'll be more than happy with sport mode. It's louder, faster and more fun than normal mode. To be honest though you'll end up using normal mode most of the time if you live in any urban area.

Beyond the power and how it's controlled, the car ships with an eight-inch touchscreen Sync display, but you should upgrade to Sync 3. It's still one of the best infotainment systems on the market with virtually zero latency and an easy to use (but slightly bland-looking) UI. It worked flawlessly with Apple CarPlay and Android Auto. 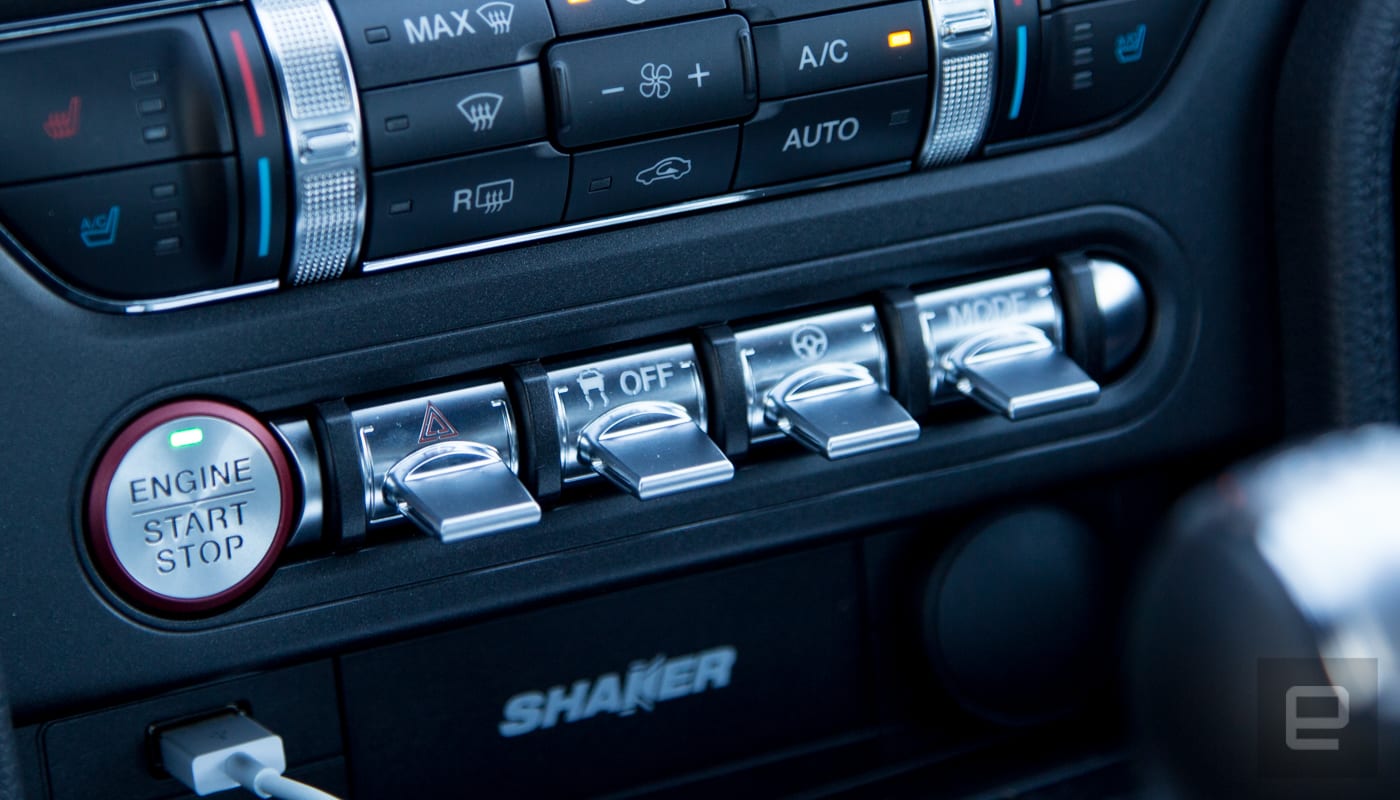 I do have one issue with the car's center console and that's the metal effect toggle switches. They look cheap and most of them don't even toggle. They just go up, which is a pain when you're switching car modes and you go past your desired setting. Instead of pressing down, you have to press up until it appears again. While the rest of the interior looks outstanding, it's hard not to focus on those ugly switches.

If you're lucky, the comfort of the front seats will take your mind off the weird toggle switch decision by Ford designers. The back seats might also be comfortable, I'll never know since no one over five-foot-three should ever attempt to sit in them.

On the whole, the Ford Mustang GT a blast to drive while using current technology to enhance that experience. No, you won't get semi-autonomous features. The cruise control isn't even adaptive. The V8 monster of an engine is also pretty much the furthest you can get from the hybrid with a 15 city and 25 highway per gallon ratings. 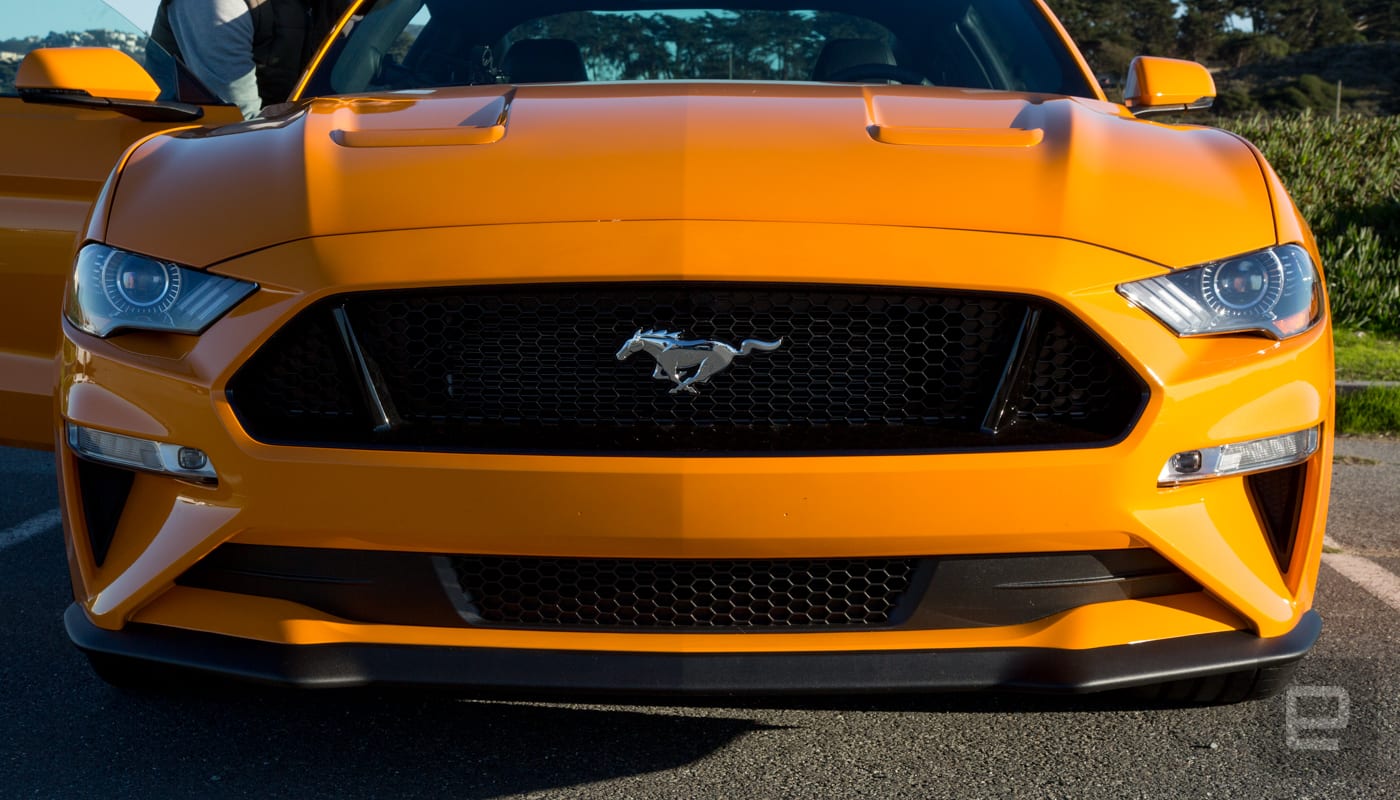 Yet, when you sit behind the wheel, shift it into first and stomp down on the accelerator -- for folks who truly love driving -- it's a love letter from Ford of a bygone era. The Mustang GT is an insanely fun driving experience that merges power with technology in way that should appease fans of old-school muscle cars while giving new fans that have lived all their lives with tech-filled cars a chance to understand why the Mustang has persevered all these decades.

In this article: design, Ford, gadgetry, gadgets, gear, musclecar, mustang, mustanggt, mustanggtfastback, sync3, transportation, video, hidden:vv_3x4:c533e881-e00b-3460-8196-4a667b24e3d8, hidden:vv_16x09:db191e79-8275-3a34-b4c1-f06e665d92ce
All products recommended by Engadget are selected by our editorial team, independent of our parent company. Some of our stories include affiliate links. If you buy something through one of these links, we may earn an affiliate commission.