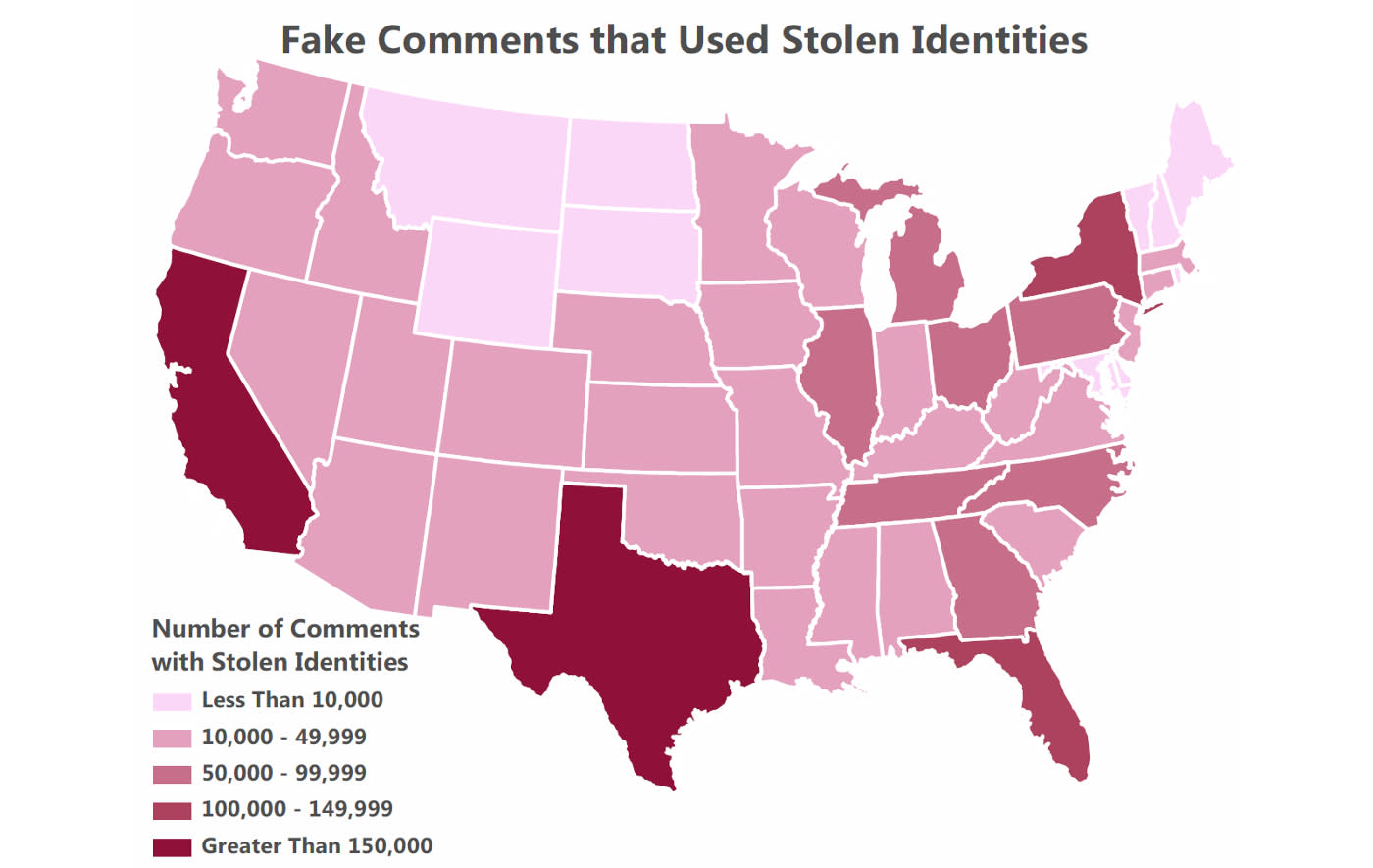 As many as 2 million identities were stolen to leave fake comments in support of the FCC's decision to kill net neutrality, according to the New York Attorney General's Office. Based on the 5,000 or so complaints filed with the office, some of the victims are senior citizens, some are minors, while some are already dead. "This is a 13 year old child -- she did not post this comment, nor did anyone else in her household," a report filed by a New Yorker said. A Chicago resident who also filed a complaint called the fake comment made under their mother's name "sickening." Their mother passed away several years ago from cancer.

While it's still not clear how the identities were stolen, the Attorney General's Office has at least figured out where the fake comments came from: New York, Florida, Texas and California produced 100,000 fake comments each. It has released the details of its investigation along with a letter from Attorney General Eric T. Schneiderman criticizing the FCC's decision move forward with its net neutrality vote. He's urging the commission to postpone the vote, which is scheduled to take place today at 10:30AM Eastern, and to help further his team's investigation.

"Millions of fake comments have corrupted the FCC public process -- including two million that stole the identities of real people, a crime under New York law. Yet the FCC is moving full steam ahead with a vote based on this corrupted process, while refusing to cooperate with an investigation. As we've told the FCC: moving forward with this vote would make a mockery of our public comment process and reward those who perpetrated this fraud to advance their own hidden agenda. The FCC must postpone this vote and work with us to get to the bottom of what happened."

Schneiderman once called out the FCC for refusing to look into the issue. His office apparently requested for FCC's records nine times between June and November, but it never received any concrete response. Earlier this month, the commission finally agreed to cooperate with the New York Attorney General, giving Schneiderman's team a way to finally start analyzing all the anti-net neutrality spam that flooded the commission's website.

In this article: fcc, fcccomments, gear, internet, netneutrality, politics, security, stolenidentities, hidden:vv_3x4:9bc06fb2-a6c3-37d9-8ea5-63ddd129d791, hidden:vv_16x09:73a33919-1686-3cfd-b5db-8a49b77fdc3c
All products recommended by Engadget are selected by our editorial team, independent of our parent company. Some of our stories include affiliate links. If you buy something through one of these links, we may earn an affiliate commission.