Eve V review: The wisdom of the crowd mostly pays off

If you've never heard of Eve, I like to think of it as the OnePlus of computers: By ditching middlemen, this 11-person startup found a way to build and sell premium computers at a significant discount. The difference is, the people in charge didn't draw up a list of specs and start churning out machines. Instead, they left just about every important design and component decision to a coalition of over 1,000 community members. When I first heard about the project earlier this year, I was skeptical -- how good can a crowd-sourced computer be when this many people are involved?

Well, it's time for me to eat crow. Though it's not perfect, the Eve V is a surprisingly worthy Surface Pro competitor, especially for a first-gen product.

To really get a feel for what the Eve V has to offer, we need to look at the available configurations. The most basic model costs $799 and pairs an Intel Core m3 chipset with a 128GB SSD and 8GB of RAM. Microsoft's entry-level Surface Pro costs just as much and also has a Core m3 CPU, but ships with only 4GB of RAM. To further sweeten the deal, every Eve V comes with an active pen and keyboard cover. In the case of the Surface Pro, extras like these add an extra $260 to the bottom line.

The difference in value becomes more pronounced the more you spend. While the top-tier Surface Pro packs one of Intel's dual-core Core i7-7660U chips, a fully tricked-out V uses a slightly slower Core i7-7Y75. Both machines come with 16GB of RAM and a 1TB SSD, though, and while the V can't win in terms of sheer power, it'll cost you a full $500 less than the highest-end Surface Pro. For Eve and its community, it's all about getting more for less.

The machine I've been testing sits one notch below Eve's most premium offering, and the only difference is it ships with a 512GB SSD. (It, too, costs about $500 less than the comparable Surface Pro.) Consider me impressed. The dark aluminum chassis has been a bit of a fingerprint magnet, but the build quality is reassuringly sturdy. The V's body is a little heavier than you might expect since the community lobbied for a bigger battery, but it was never uncomfortable to lug around and slip into a backpack. 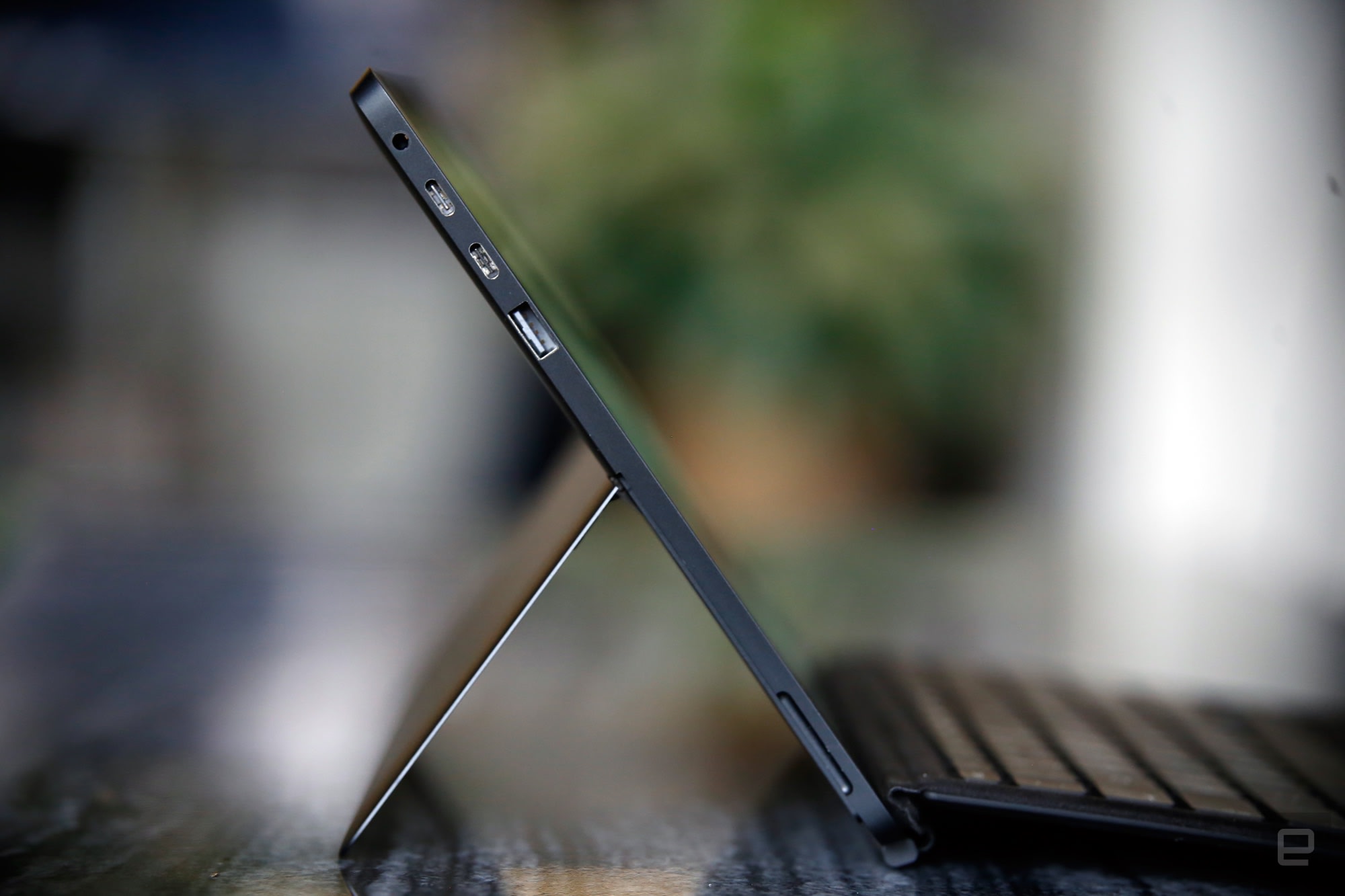 I also have the community to thank for the plethora of ports found: two full-size USB 3.0 connections, one USB 3.0 Type C socket and a Thunderbolt Type C port, as well as a microSD slot for good measure. Why the new Surface Pro still only has one USB port is beyond me, and I'm glad Eve took the path that it did -- it allowed me to hook up a mouse and full-size keyboard for office work and charge my Android phone at the same time.

The real star of the show is the display: a 12.3-inch IGZO LCD screen with a resolution of 2,880 x 1,920. It's one of the brightest I've ever seen on a convertible machine, and even though a batch of defective screens caused a production delay, I think the longer wait time was worth it. Text is crisp, and colors pop compared to the Surface Pro. The bezels around the screen are a bit thicker than I'd like, but considering the price, I don't think they're a big deal. 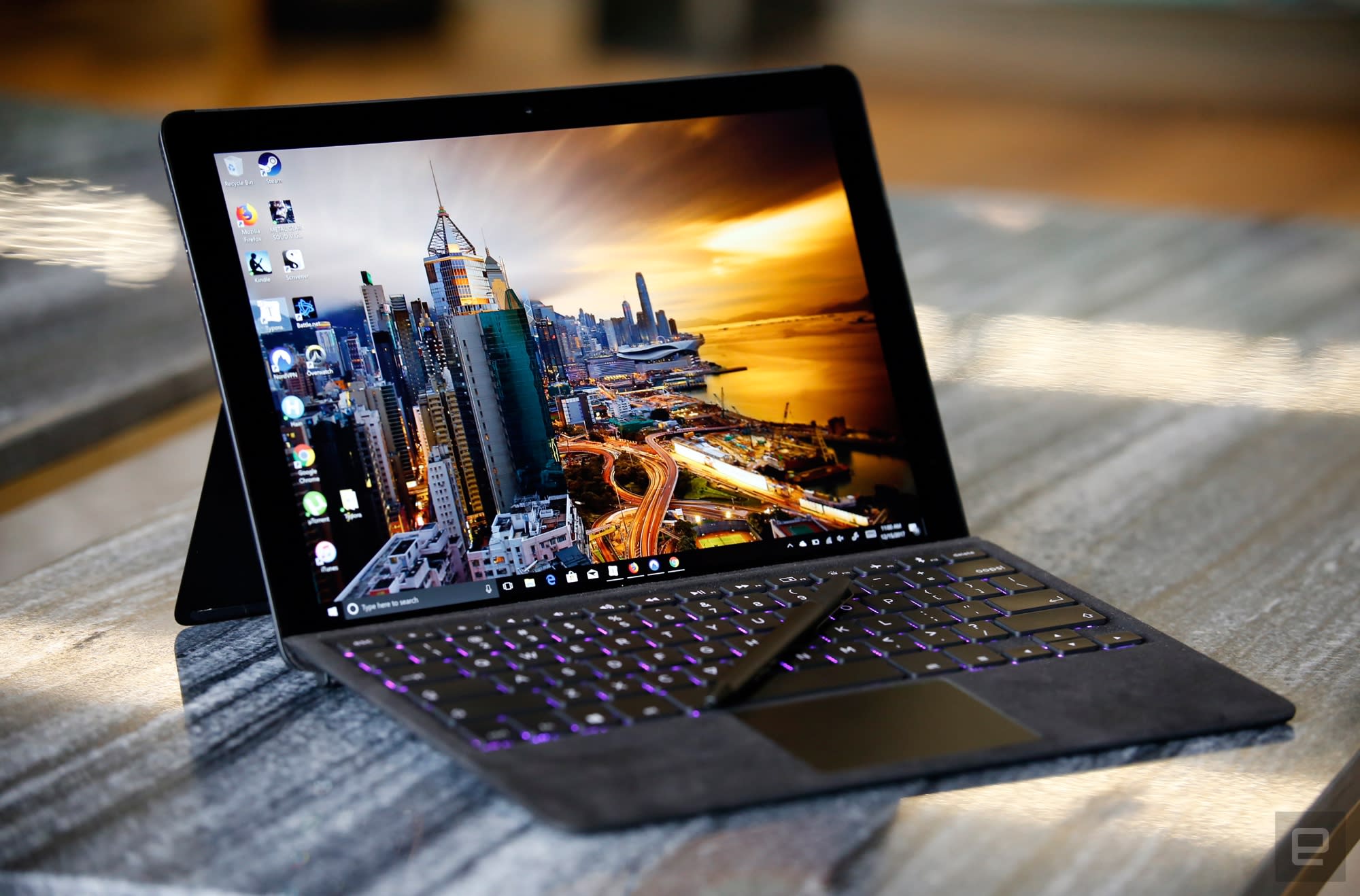 I also appreciate the level of power packed into the V, even if it's not quite as fast as some of its competitors. My daily routine consists of a lot of writing (duh), image editing, Spotify sessions and YouTube binges. Those use cases don't require the sort of horsepower that a U-series Core i7 chip brings to the table, and so I never felt like I was missing out. And, while the V isn't meant to be a full-on gaming machine, it manages to run titles like Metal Gear Solid V and Overwatch (at lower graphical settings, naturally) without too many hiccups.

With the built-in 48Wh battery, I've been able to use the Eve V for between 10 and 11 hours of work before needing a recharge. Your mileage will depend on your usage habits, but I appreciated being able to plop down and work nonstop before having to worry about plugging in. To be clear, that's about an hour less runtime compared to the most recent Surface Pro. That said, the Eve V's battery life is still in line with other ultraportable machines we've tested this year. If nothing else, it absolutely blows away my daily driver (a 15-inch, Touch Bar MacBook Pro), and for that I'm grateful. 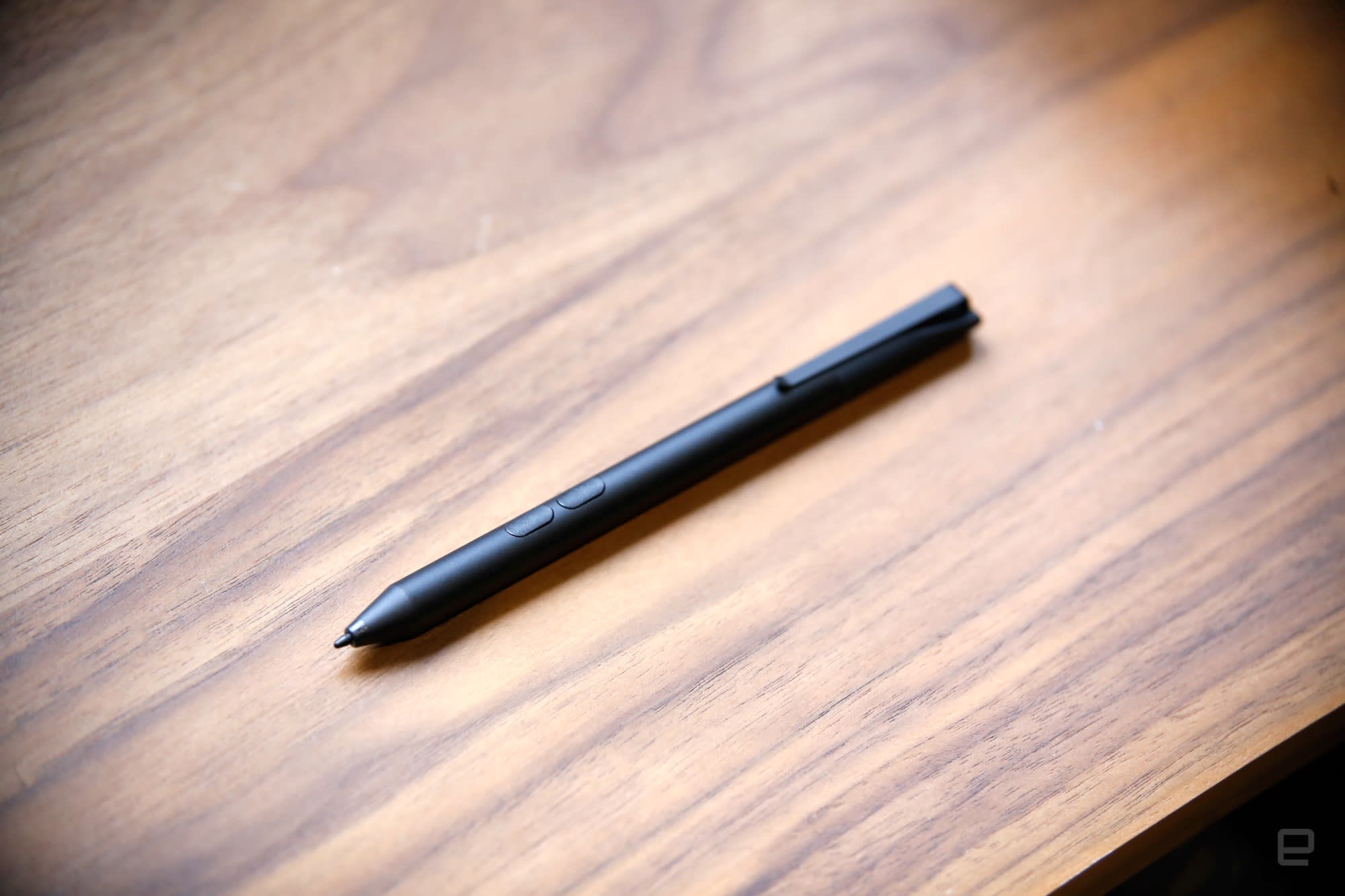 As you'd expect from a small startup with little experience building this kind of hardware, Eve didn't get everything right. The thing is, it's sometimes difficult to figure out where the blame lies. Consider the active pen included in the box -- it doesn't support as many levels of pressure sensitivity as Microsoft's Surface Pen, and occasionally feels sluggish compared to the competition. It's perfectly adequate for occasional note-taking, but I wouldn't trust it for much more beyond that. Then again, this was a concession the Eve community eventually decided on in order to keep costs down, and so I don't imagine them complaining much about this. There didn't seem to be as much conversation about the Eve V's speakers, and it shows: They get decently loud, but the audio is decidedly toothless.

Then there's the keyboard, which I'm generally fond of. After using a 2016 MacBook Pro, with its flat key switches, the Eve keyboard's key travel feels like a return to sanity. There are a few novel flourishes here, too, including a backspace key that says "oops" and the ability to toggle between seven different backlight colors for the keys. The trackpad is a little small for my liking, but it gets the job done. The whole thing is coated in Alcantara fabric, too, though it's much plusher than the kind Microsoft uses for its Surface keyboards. It's softer, which is nice, but the material also makes the keyboard more prone to catching crumbs, lint and dust. Learn from my mistakes and don't eat your lunch over it. 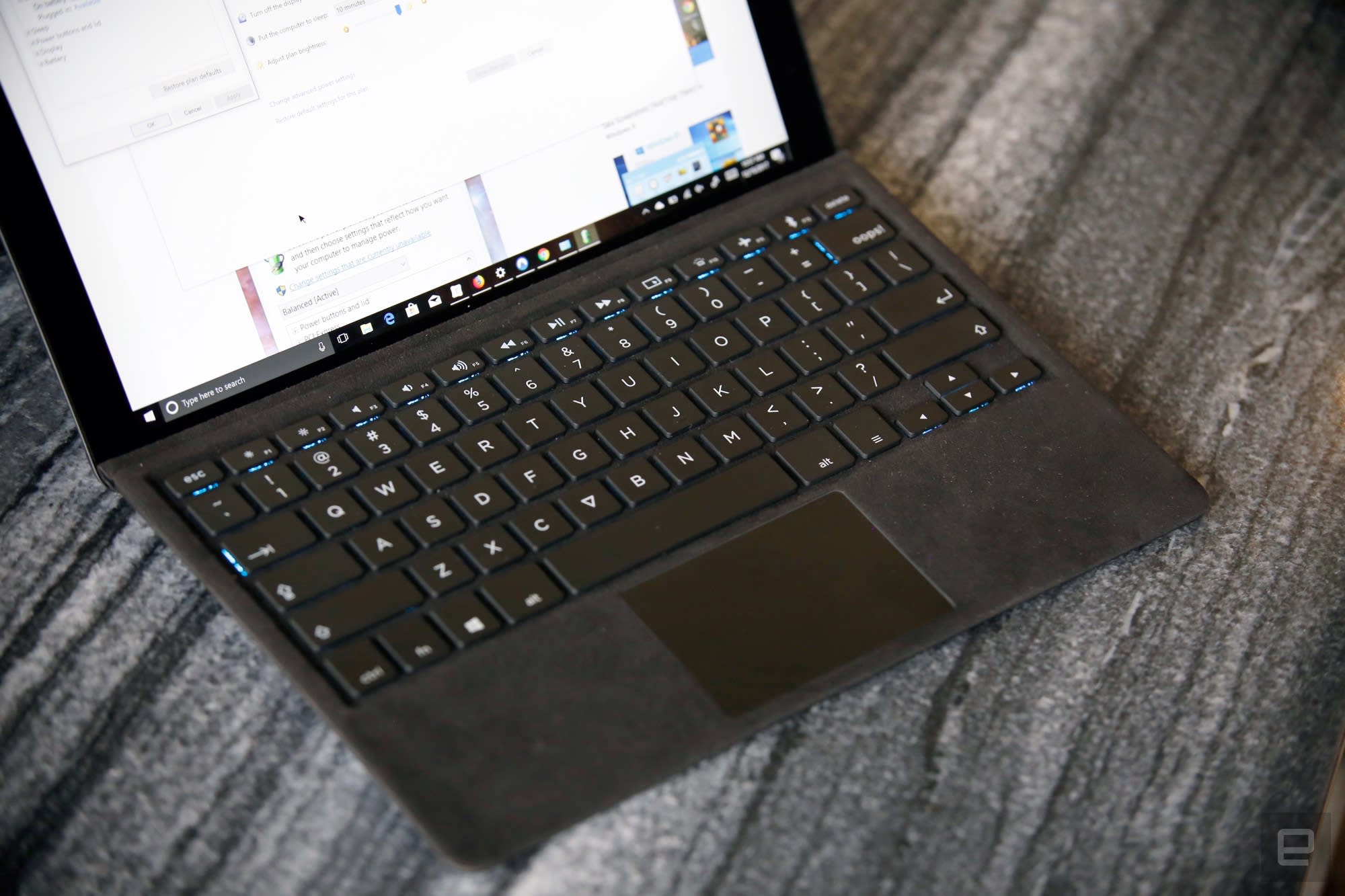 Ultimately, it's the keyboard's most ambitious feature that disappoints the most. The keyboard itself is thicker than one of Microsoft's because there's a battery and Bluetooth module inside, allowing you to detach the keyboard from the V's magnetic connector and peck out emails from a distance. Unfortunately, the setup process is more confusing than it should be, and I noticed some latency once I carried the keyboard more than a foot or so away from the machine. That is, when you can you get the connection to work at all. On a few occasions, I couldn't get the keyboard to wake up after disconnecting it from the V, for reasons that remain unclear.

In its current form, the Eve V might not be for you, and that's understandable. The company behind it obviously didn't get everything right, and there are some features that I would've preferred didn't make the cut because I didn't lobby for them in the design process. And yet, after testing the V, I still find myself inexorably drawn to Eve's mission: the idea of a low-cost premium machine designed by the masses for the masses. I don't think the Eve V's missteps are due to bad community decisions -- they seem like the sort of shortcomings you'd expect from a company that's new to precision production.

Even now, Eve's devotees are trying to jointly design a desktop docking system to give the V extra ports and video outputs. At this point, my lingering concerns mostly lie with Eve itself. What remains to be seen is how well this young company will scale to meet the needs of its growing fan base. For now, though, Eve has proved that design by community -- even really big ones -- can be fruitful when the people involved all care about building something special. Here's hoping Eve and its fans can make the next one even better.