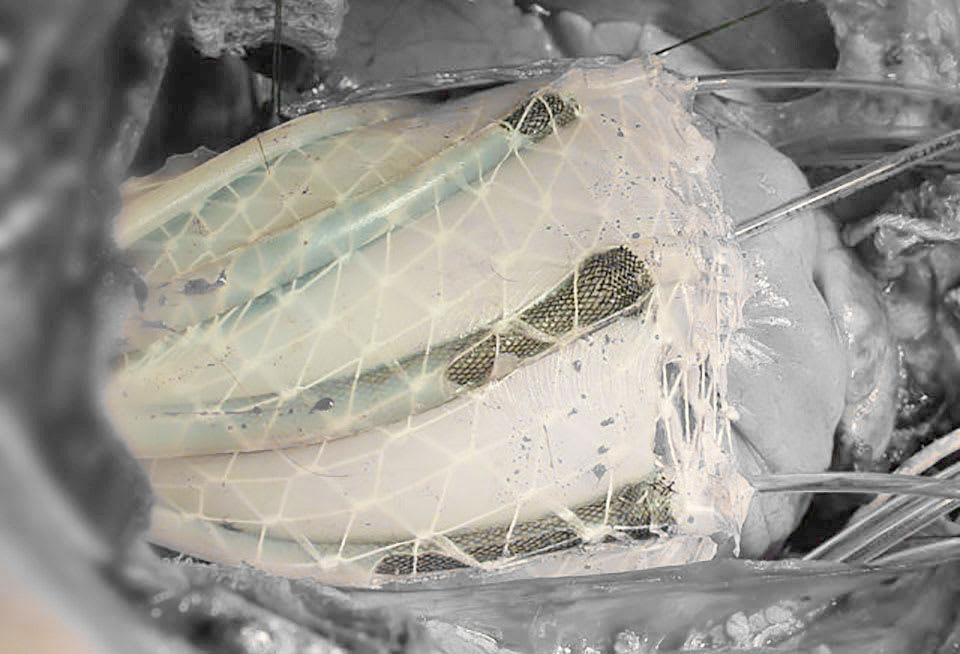 Researchers from Harvard University and Boston Children's Hospital have developed a breakthrough "soft robot" device that might improve your odds of surviving a heart attack. Unlike mechanical devices inserted into heart valves, it's wrapped externally around the heart, where it pumps and twists to assist cardiovascular function. "Most people with heart failure do still have some function left; one day the robotic sleeve may help their heart work well enough that their quality of life can be restored," says co-author and cardiothoracic surgeon Frank Pigula.

The device was inspired by the heart itself and made possible by recent advancements in soft robots. Like other recent bots, the thin, adjustable silicon sleeve is powered pneumatically by actuators placed around it. Driven by an air pump, one set of actuators expands and contracts in a pumping motion, while another layer moves helically to twist it. The result is a motion that's uncannily similar to a real heart (see the video, below).

Doctors proved the device worked by implanting it in pigs with heart capacity reduced to 45 percent by drugs. Once applied, it boosted cardiac output to 97 percent of healthy levels. At the same time, it has a big advantage over implanted ventricular assist devices (VADs). Unlike those, it doesn't contact the blood, so patients wouldn't need blood thinners to avoid clots.

"The cardiac field had turned away from idea of developing heart compression instead of blood-pumping VADs due to technological limitations, but now with advancements in soft robotics it's time to turn back," Pigula says. The device could help 140,000 patients who suffer from heart failure symptoms, even at rest, by keeping them alive until a donor heart becomes available, or helping doctors to rehab the heart.

Despite the successful tests on pigs, the devices are still in the early stages, and would need serious engineering and testing before they could be used on humans. However, the team believes this type of "mechanotherapy" holds plenty of therapeutic promise, and not just for the heart. "This work represents an exciting proof of concept result for this soft robot, demonstrating that it can safely interact with soft tissue and lead to improvements in cardiac function," says Harvard SEAS Professor and co-author Conor Walsh.

Via: Harvard University
Source: Science Translational Medicine
In this article: HarvardUniversity, Heart, medicine, Research, robots, science, SoftRobot, video
All products recommended by Engadget are selected by our editorial team, independent of our parent company. Some of our stories include affiliate links. If you buy something through one of these links, we may earn an affiliate commission.