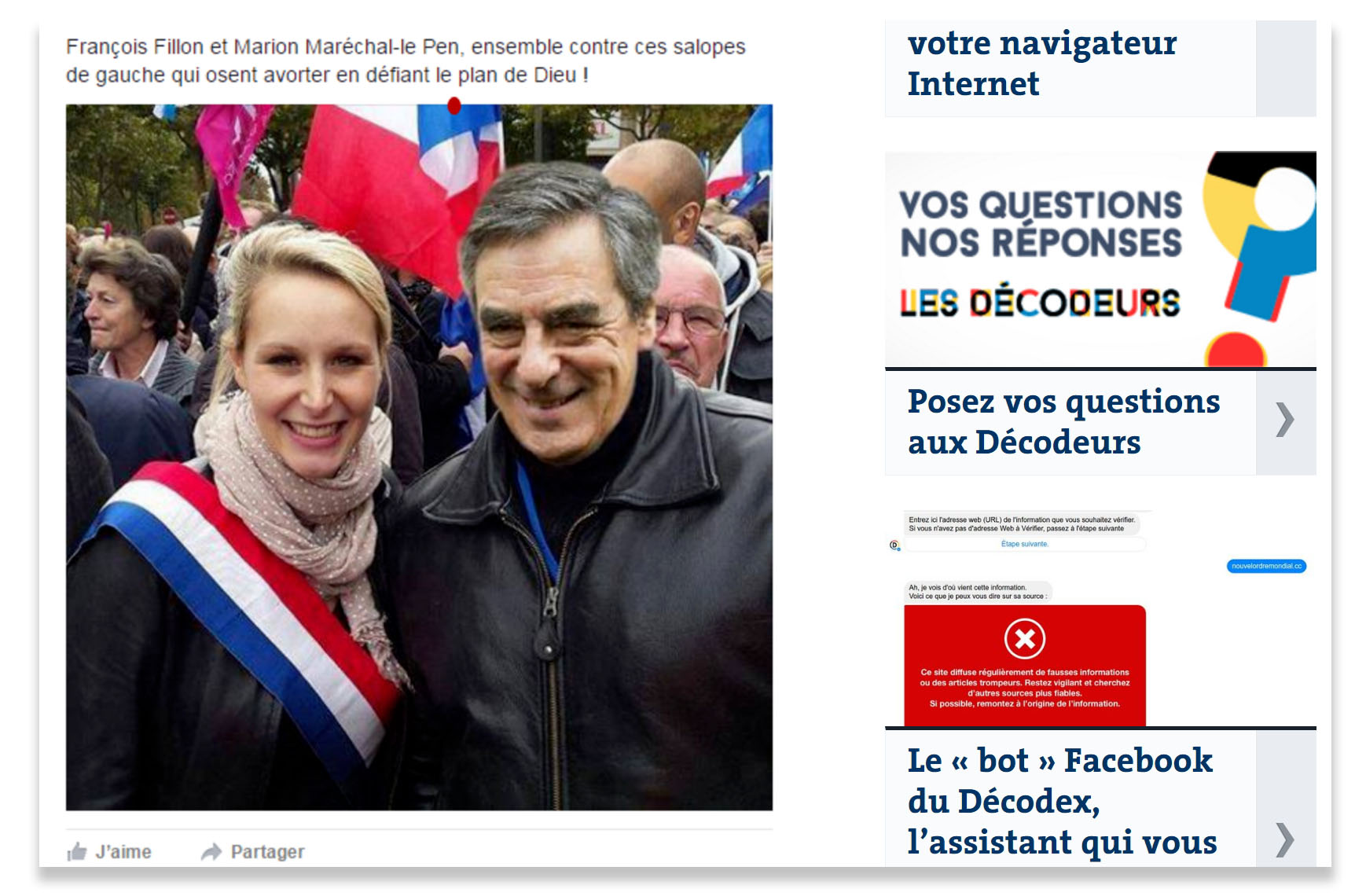 Fake news on Facebook and Google reached millions of people during US elections, and France wants to make sure its own presidential contests aren't disrupted. Compounding the risk, a lot of fake US news reportedly came from Russia, and Marine Le Pen's far right National Front party is funded by Russian banks friendly with Vladimir Putin. As such, Facebook has teamed with eight major news organizations including Agence France Presse (AFP), LeMonde and Les Echos to curb false information during France's April elections.

If users report an article, it'll be sent to a special portal manned by media experts. Once verified as fake by at least two organizations, users will be alerted by a warning, and eventually, fact-based articles will be proposed instead. Both Facebook and Google will dramatically reduce the web exposure of repeat offenders.

Another separate effort is called CrossCheck, launched by Google News Lab, the First Draft news coalition and 17 media partners. The initiative will "help the public make sense of what and who to trust in their social media feeds, web searches and general online news consumption in the coming months," according to the site. The latter effort will require considerable manpower, so the French media groups have enlisted journalism students to help.

Because of the labor needed to check numerous stories, French media groups were reluctant to go along with Facebook first. However, the company said that algorithms would weed out most fake posts, and they can even tweak them to catch new cheating techniques. "That's the part that convinced us to join with Facebook," said LeMonde Director Jérôme Fenogliov. "For the first time, we can give feedback on the algorithms if there are editorial issues with articles."

French media groups have created their own, separate projects to combat fake news. Le Monde has a series called "Les Décodeurs," for instance, letting users submit stories for verification. In the example above, the site explains how presidential candidate François Fillon was photoshopped next to Marion Maréchal-Le Pen, making it seem like he was sympathetic to the far-right movement. Both Le Monde and Libération are also creating databases of suspect websites and false stories.

While the effort is targeting French election news, Google and Facebook aim to carry it on during the upcoming German elections, too. "It's the first time we've tried such an initiative for such a long period of time," said First Draft's Jenni Sargent. "If it works, we'll keep doing it." The first round of France's elections takes place on April 23rd, with a likely second round scheduled for May.

Source: Reuters
Coverage: Les Echos (translated)
In this article: culture, Election, Facebook, FakeNews, France, google, hoax, internet, LeMonde, LExpress, politics
All products recommended by Engadget are selected by our editorial team, independent of our parent company. Some of our stories include affiliate links. If you buy something through one of these links, we may earn an affiliate commission.