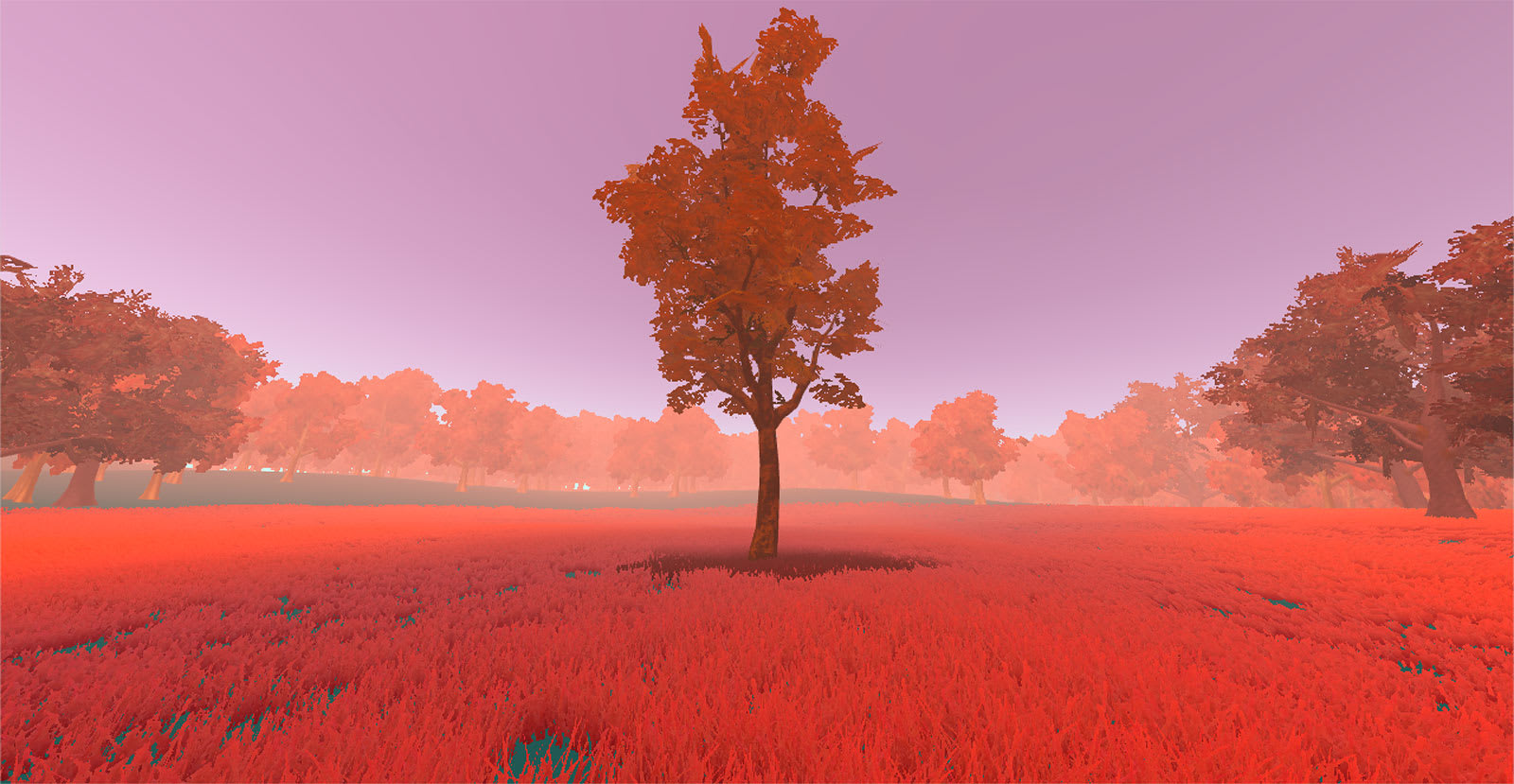 I'm sitting on a field of tall, red grass staring straight ahead at a lone tree. Its leaves match the crimson landscape that stretches out before me. In the distance, a rusty orange forest fades into the background. There's a gentle rustling of leaves, occasionally interrupted by the faint chirping of a bird, that forces me to breathe slower.

"Thank you for being here and being willing to consider moving towards the idea of dying and death," a calm, male voice prepares me for the virtual meditative journey.

A hazy white light source rises in the distance as the voice walks me through the process of focusing on my breathing. I watch the blades of the grass swish to the left with the wind. The tree slowly starts to lose its leaves. "Feel the air around you," the voice continues. "Feel yourself letting go as if you're a tree dropping your leaves. The breeze takes the leaves away. Everything that you know and everything you cherish will be taken by the wind."

As I let the weight of those words sink in, the blue sky slowly takes on a deep green hue, ushering in darker skies. Within moments, the field beneath me turns into a deep red lake that starts to rise around me. I gasp for air before I quickly remind myself that I have an Oculus Rift headset on my face.

When We Die is a virtual reality experience for perhaps the most difficult kind of contemplation: the end of life. The first half, with the metaphorical tree, presents the ephemerality of nature as a symbol of the finiteness of your own life. But the next chapter addresses the wider perception of death as a tragedy through real-life experiences.

In the second half, serene views of the cosmos shift the narrative from considering your own mortality to thinking about the process of dying as an inescapable reality for all. Celestial objects that dot the night sky reveal audio clips from a hospice worker, who shares her observations of death, and a neurologist, who grounds the experience in a physician's approach to it. 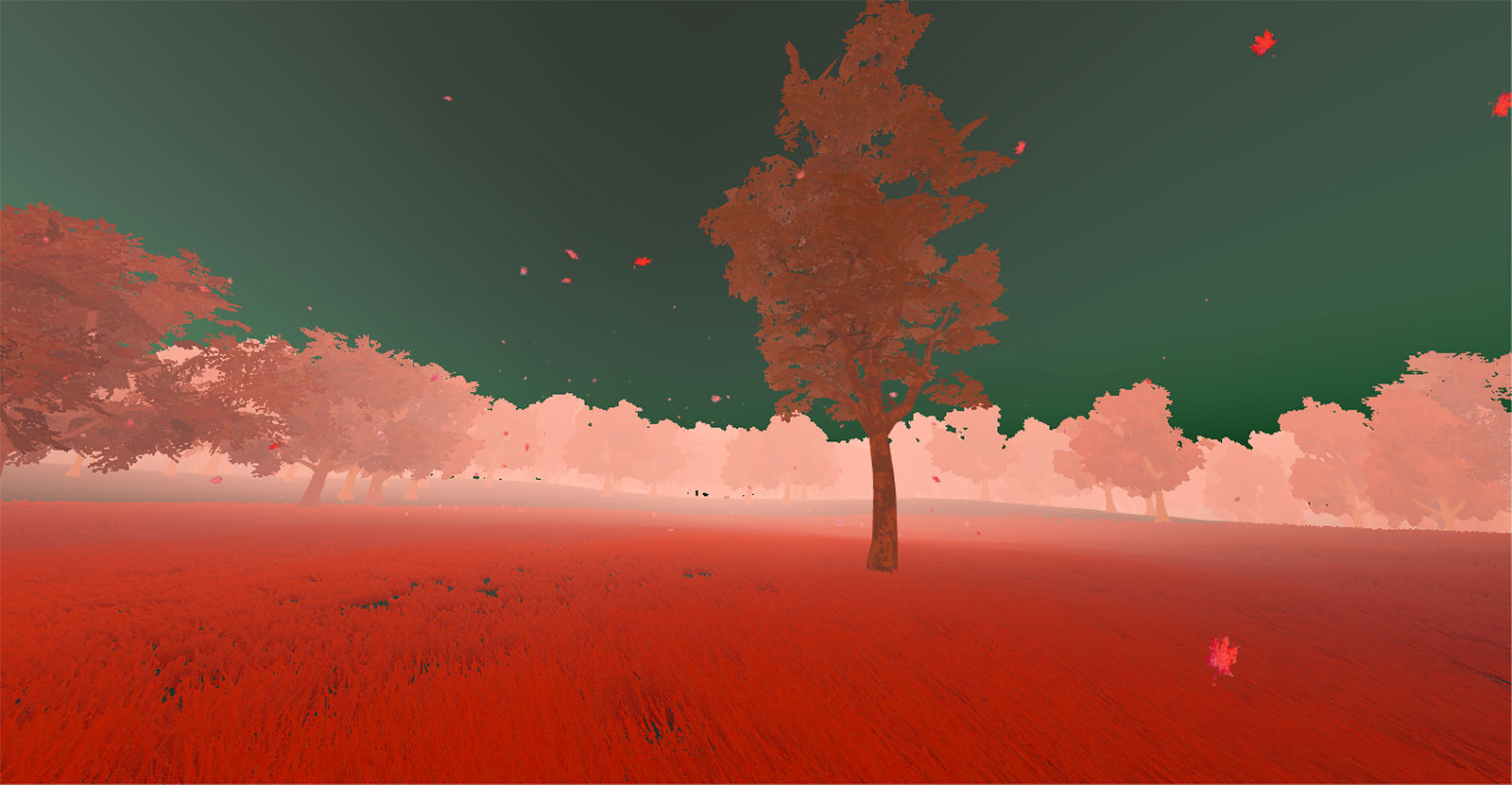 "We wanted to create a safe space for people to have difficult conversations," said Paula Ceballos, an NYU student who is a part of a trio that created When We Die for the school's Interactive Telecommunications Program. "We find that in the Western culture death and dying and aging get put behind closed doors, and we wanted to bring it up and make you think about it."

The fear of death, your own or a loved one's, is deeply ingrained in the human psyche. It can drive the choices we make, yet it continues to be shrouded in mystery. Over the years, hundreds of research studies have probed the process of dying, the fear of confronting death and how the awareness of one's own mortality has impacted religious, cultural and spiritual world views.

When We Die makes room for that spiritual contemplation with its abstract worlds: There are no physical bodies, only metaphors for the process of aging and dying. But the idea is rooted in a more practical understanding of the ways in which neglecting end-of-life processes can hamper the process of dying, especially for the elderly and the terminally ill.

Dr. Devi shares her personal experience in When We Die.

"It leads to systemic challenges," said Leslie Ruckman, an NYU student whose background in health care informed her work on When We Die. "There's all this money that gets spent on treating patients in ICUs, and people [often] end up dying in hospitals even though advance directives might say they'd rather die at home. These are bigger issues that arise out of the inability to look at the end of life and not being able to define what a good death might look like."

The VR experience relies on surreal visuals to make that happen. According to co-creator Dana Abrassart, when the group first started working on the project, they envisioned a James Turrell-style liminal space. But they quickly realized that a virtual take on the light and space movement would trigger motion sickness.

Nausea in a death-related experience would defeat the purpose of their work. So instead, the group found inspiration in Richard Mosse's infrared imagery. "It's this idea that there's a light spectrum around us but the human eye can't see it," Ruckman told me. "We liked that as a parallel to this natural process that is always present and yet, we choose not to see it."

Death is a constant. Yet its prevalence is hidden behind hospital doors. "In the US, there's a sanitization of death," Dr. Gayatri Devi, the neurologist whose voice floats through the cosmos in the second half of the VR experience, told me at her clinic in Manhattan. "Our current view of death might be a victim of industrialization and development. There's less contact with ill people who are dying so they get sequestered and put in a different place. Whereas in India, for example, there is a philosophy of maintaining contact with family and contact with death is not uncommon."

More than 80 percent of Americans with chronic illnesses would prefer to forego hospitalization, but according to the CDC, 70 percent of that population dies in a hospital or nursing home. Even in cases where patients have advance directives to avoid aggressive measures, a widespread study revealed that only 25 percent of the physicians were aware of their patients' end-of-life choices. The discrepancies are jarring. Even though the rise of palliative care and hospice work in the past few years is starting to close that gap, the inability to talk about death continues to get in the way of making better choices.

"Death is not a contagious illness," said Dr. Devi. "But in some ways, we treat it like one. We need to talk about it and get comfortable around it and maybe use VR to experience it. The better the conversation about death, the more likely we'll be to allow more of us to die at home so we're not scared of it."

Conquering those fears has been the focus of recent psychological explorations in VR. While When We Die uses a light meditative touch to approach conversations around death, a Spanish research group recently simulated an out-of-body experience to tackle the full spectrum of thanatophobia (or the fear of dying) in an attempt to reduce anxiety.

"Death is not a contagious illness. But in some ways, we treat it like one. We need to talk about it and get comfortable around it and maybe use VR to experience it." -- Dr. Gayatri Devi

The idea of one's own nonexistence has always been a tough one to conquer. "But it's a reality and we can't opt out of it," said Dr. Devi. "When you allow yourself into that space of thinking you're dead, where you lose agency over yourself -- that can be a powerful experience. Allowing yourself to sit with that makes you vulnerable and to be able to think about death. You have to allow that to happen."

While some might consider this exploration of death terrifying or even futile, in many cases the practical rewards offer the required motivation. Preparing beforehand, for instance, allows people to get their affairs in order, which unburdens families from making end-of-life decisions.

"When people are faced with death, if they haven't done any preparation, there's too much fear and anxiety to let anything else in," Stephanie Hope, the hospice nurse who shares her experiences in When We Die told me. "It makes it important to talk to people who aren't faced with that yet."

Stephanie Hope talks about the "dignity of dying" in When We Die.

Hope, who has been a hospice worker for about four years, points out that when people think about having limited time, they start to withdraw and often show an inclination to spend time with people they're close to. She likens that purposeful shrinking of the world to a kind of intimacy and peace that can be felt in the aloneness of VR.

The isolation, which tends to be one of the biggest criticisms of the medium, lends itself to the deeply personal experience of contemplating death. "You're in your own world and this is your moment," said Hope. "So to think that that's what it might be like at the end for you can be powerful thing."

While the immersive possibilities of VR feel contemporary, tools that address the human predisposition to death have been around for centuries. John Troyer, director of the center for death and society at the University of Bath, traces the lineage of the visual format all the way back to mediumship. "For me, a lot of it, although a different kind of technology, has a relationship to this idea of connecting with the dead in some way," he said. "To understand any kind of new tool that is supposed to help people think about death, we have to place it in context of the long history of tools that were created by humans to help other humans make sense of their mortality."

Troyer pointed to theatrical experiences like phantasmagoria of the 19th century, which played with themes of monsters and death long before VR. The use of projection systems like magic lanterns turned those imaginative ideas into visual experiences for audiences, which in a way is comparable to the current applications of the immersive technology.

The visual trickery of present-day VR, however, is far more profound than its predecessors, both in terms of the visual display as well as its potential for real-world impact. Death-related VR experiences can help prepare people for the inevitable but can also be used to train hospice nurses. Hope believes that bringing VR headsets into nursing school simulation labs, where trainees already work with dummies to stage scenarios, could provide crucial insight into hospice work from a patient's perspective.

While hospice workers are trained to care for the dying, physicians are primed to prevent death. "In medicine we're taught to keep that heart beating," said Dr. Devi. "There's an attitude of 'let's do whatever we can to keep this person's heart beating, even if that doesn't improve their quality of life.' But why are we putting our elderly or very ill patients through these aggressive ways when the outcome is not going to be a good-quality life?"

When We Die doesn't address those questions directly. Instead, it gets at them with an acknowledgement of death as a potentially positive experience. There's an inherent belief that dying is depressing. It continues to be a terrifying unknown because we lack experience in it. But as the VR experience reveals, the tragedy of death isn't true for all.

In this article: applenews, art, av, culture, DeathandDying, DeathinVR, DrGayatriDevi, Hospice, itp, JohnTroyer, MagicLantern, NYU, phantasmagoria, vr
All products recommended by Engadget are selected by our editorial team, independent of our parent company. Some of our stories include affiliate links. If you buy something through one of these links, we may earn an affiliate commission.