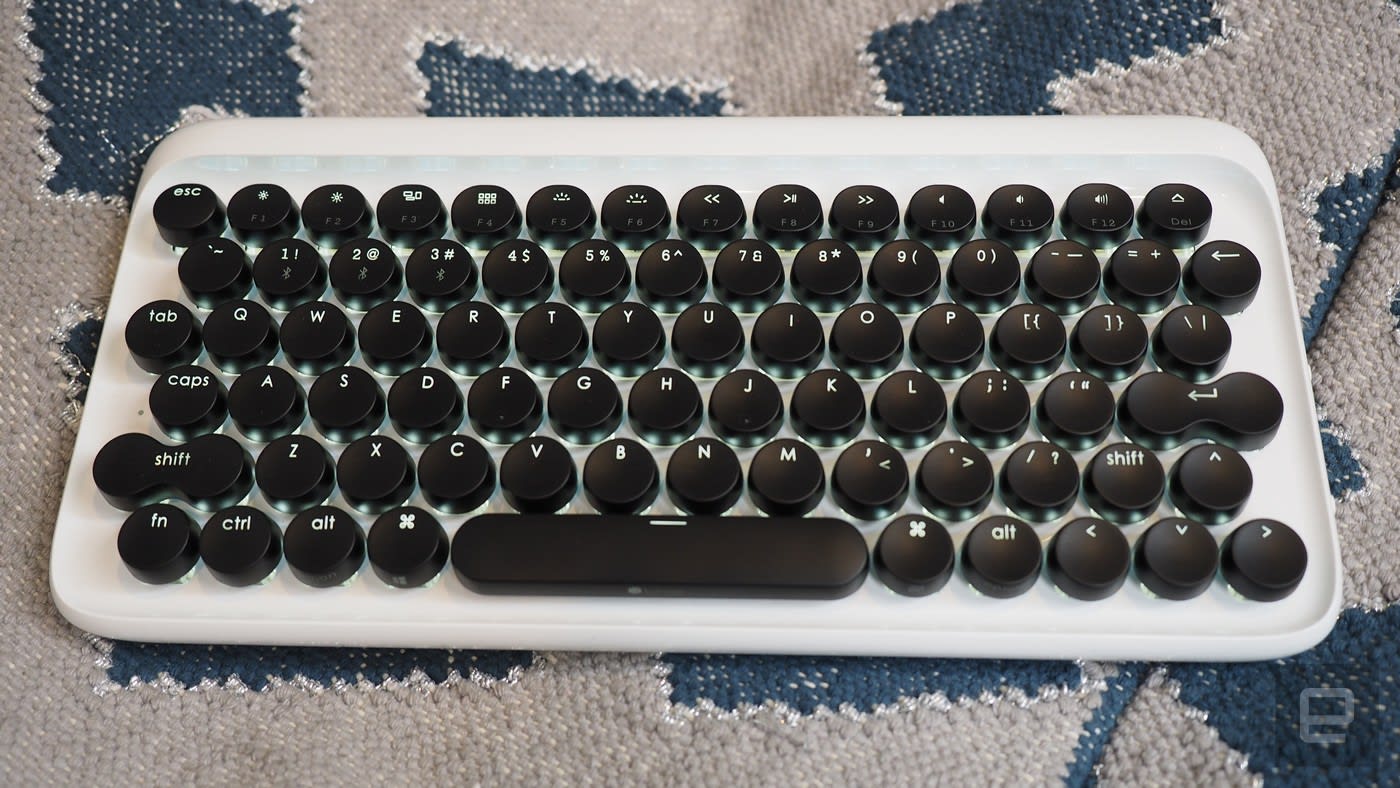 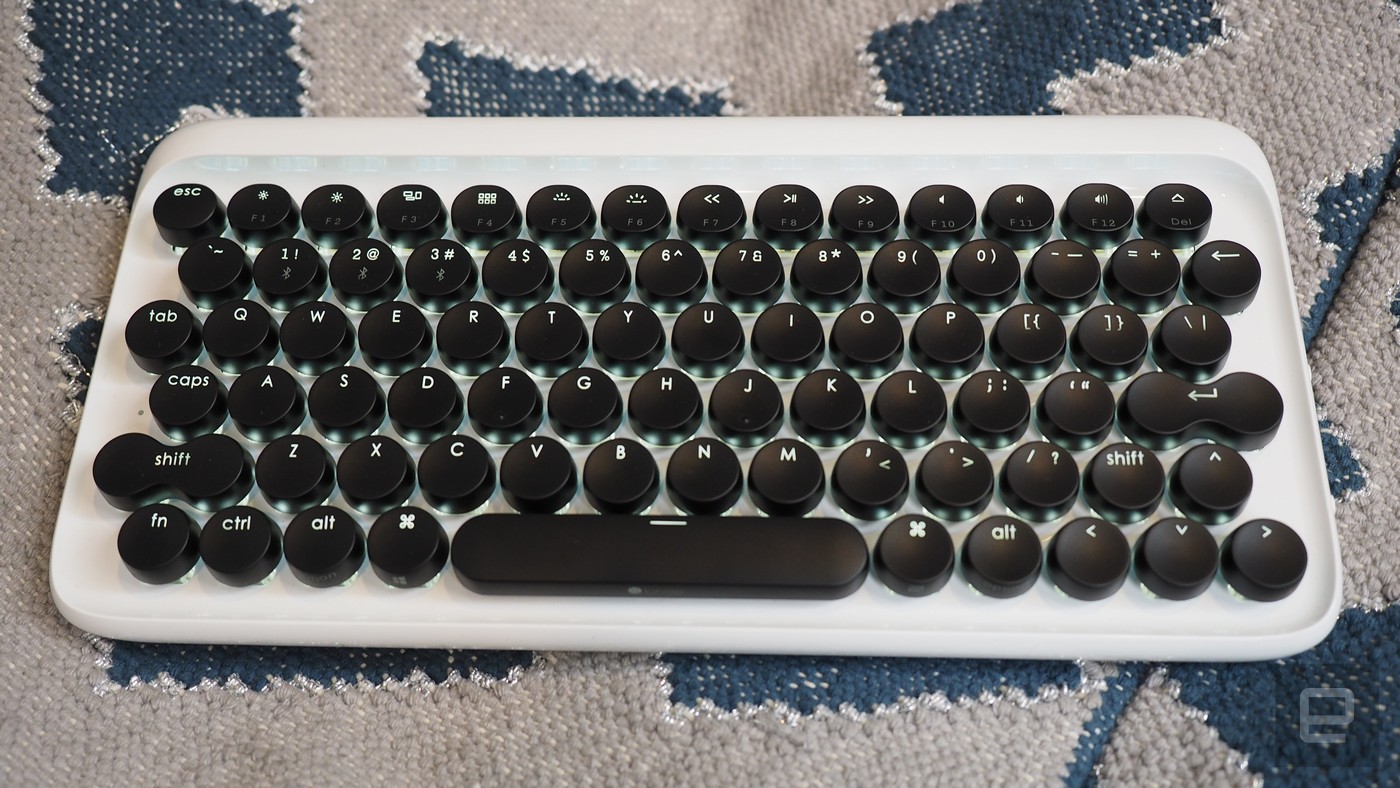 One problem with loving quirkily designed mechanical keyboards is that there's a risk of falling onto a hype train of your own making. At first blush, Lofree's wireless mechanical keyboard looked like a dream product, thanks to its Henrik Thor-Larsen-inspired design. It showed plenty of promise too, thanks to its Gateron Blue switches and Mac-first layout that works with both iOS and macOS devices (as well as Windows and Android). But despite its gorgeous looks, the Lofree keyboard is unpleasant to use. In many ways, Lofree's keyboard is both the philosophical equal and opposite to 2015's Qwerkywriter, another Bluetooth mechanical keyboard with a typewriter-inspired design. But the Qwerkywriter leaned in to that concept, looking like a 1940s Olivetti -- a stark contrast to Lofree's '60s-inspired retro-futurism. It's entirely plausible to imagine the stars of 2001: A Space Odyssey hammering out HAL 9000s code using this device.

There are six rows of keys, with function occupying the uppermost and the Mac-standard Fn, Ctrl, Alt and Cloverleaf at the bottom. Each button has a white backlight that illuminates its label, in addition to providing a nice glow on your desk. But you can't deactivate the light, only dim it, and the keys look almost blank when the device is off.

You know when you look at even the smallest wireless keyboard and its creators have sought to make each key distinct? Lofree's creators went in the opposite direction, creating a keyboard with uniform round keycaps and regular 3mm spacing, barring the shift and return buttons. Those two are a pair of keys with a little oxbow joining them together to make it easier for touch typists to find them. It does not work.

We then come to the sad state of the keyboard's arrow keys, which are so well designed that they're almost unfit for use. Rather than isolating them in space (and making them slightly smaller to compensate), the up, down, left and right buttons are all part of the regular rows. They're misaligned too, since the up key sits over the right key rather than down, which looks good but is wholly impractical.

The additional keys on both ends of the keyboard are close enough to the shift and return that there's a persistent risk of mistyping. This isn't about you needing a learning curve to adjust to a differently designed input mechanism either. It's simply an indictment of how form was prioritized over function. One of Lofree's representatives told me that the company "chose design over the layout," later adding that it thought that "design matters more."

There are some good points, including the fact that you can pair the keyboard with three different devices at a time. Then there's the fact that the hardware is solid, with a pair of chunky rubber feet giving you a nice typing angle. The Gateron Blue switches, too, are satisfyingly clicky and require effort to push down like a nice piano, with an excellent amount of travel. The company also promises that the gear will last 15 months at a time, which deserves an award from those of us who hate recharging gadgets.

On the downside, and forgive me for nitpicking, but the port design, side switches and labels all have an air of cheapness about them. The micro-USB socket as well as the on/off and Windows/Mac sliders feel a little chintzy, as if you could scratch them off pretty easily. It's as though the company spent the bulk of its time making the device look good head on -- and forgot that you'll be able to see it from the side. 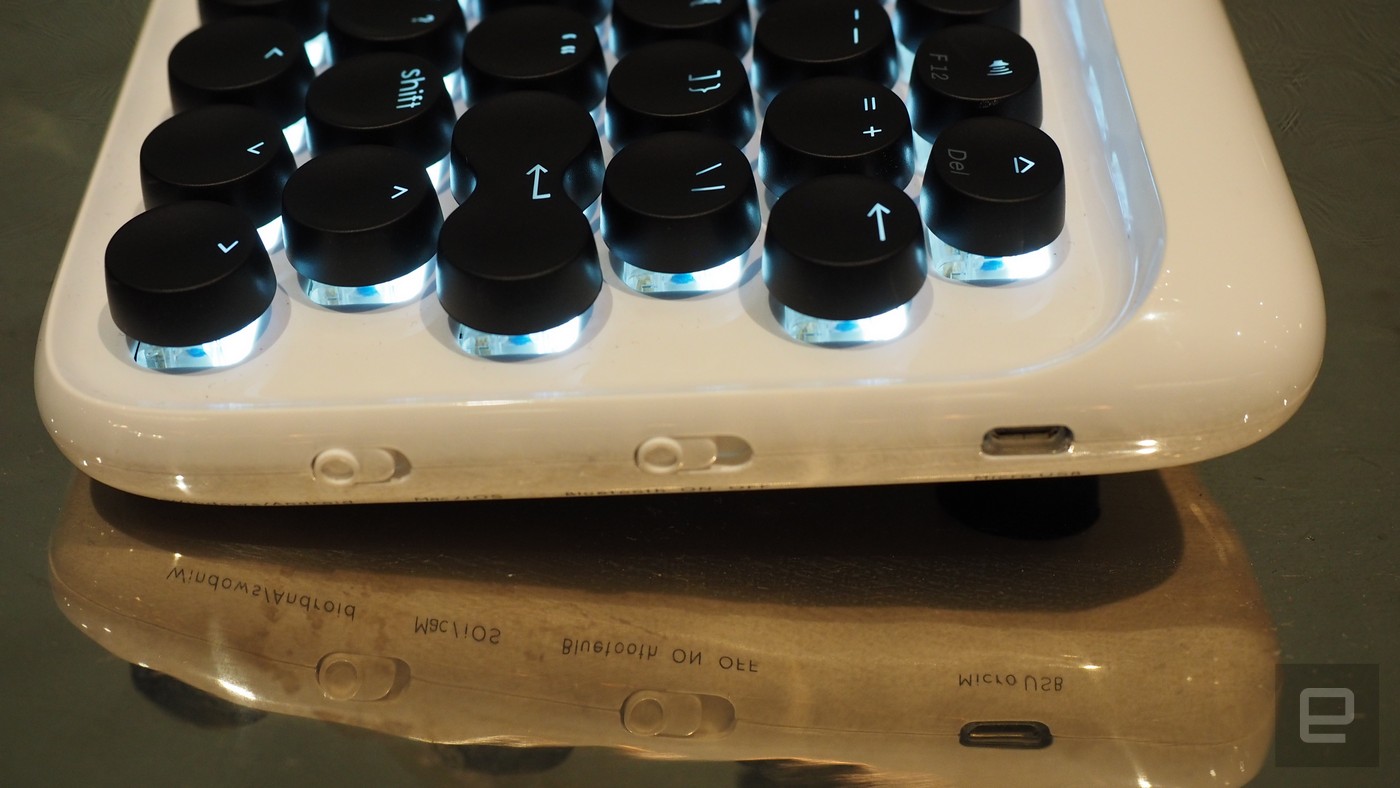 Nobody needs a wireless mechanical keyboard. It's a luxury, a statement of intent that you are serious about writing.* It's the equivalent of buying a $21 pen because a Biro won't cut it for the great American novel you're about to start creating. But here, you're buying a $21 pen that only writes at a specific, wrist-breaking angle and only in certain conditions.

It's an unwritten rule at Engadget that if you write a review, you should use the device that you test to, at least, produce the initial draft. I managed to finish the opening version of this piece on the Lofree before practicality forced me to revert back to my usual keyboard. The frustration of hunting and pecking and constantly having to tweak my amendmenbts was getting ridicoylous.**

Lofree's wireless mechanical keyboard is going to look great on the reception desk of a Manhattan art gallery. But I assure you that the person who's forced to use it regularly is going to loathe her job. The Lofree keyboard is now available on Indiegogo, priced at $74 for early adopters, with shipments expected to begin in May.

* I don't include gamers in this group purely because wireless introduces latency and they'd much prefer a wired mechanical keyboard.

** Those two typos were intentional.

Source: Indiegogo
In this article: gear, hands-on, howto, Indiegogo, Keyboard, Lofree, Mechanical, MechanicalKeyboard, personal computing, personalcomputing, Qwerkywriter, video, Wireless
All products recommended by Engadget are selected by our editorial team, independent of our parent company. Some of our stories include affiliate links. If you buy something through one of these links, we may earn an affiliate commission.