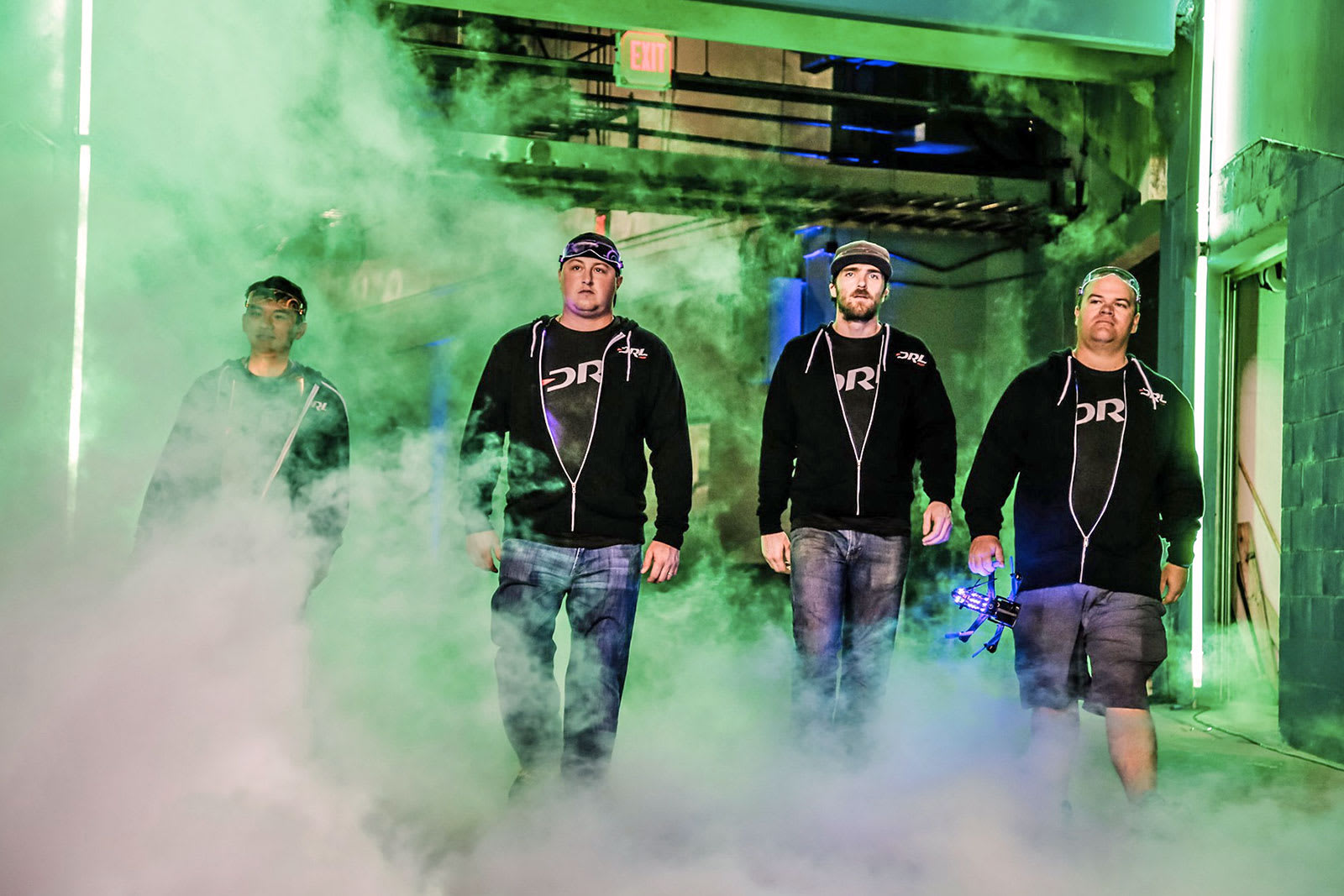 Last year, I asked a simple question: Can drone racing become as big as eSports? While we wait to find out, one of the leading race organizers -- the Drone Racing League -- is making all the right moves this year to make that answer yes. One of the keys to achieving that, the DRL hopes, is the introduction of the Racer3 drone, which will be the standard craft all pilots in the DRL race with. Unsurprisingly, it's more powerful and agile than its predecessor (the Racer2, obviously) and could be the shot in the arm the sport needs to go mainstream. The Racer3 should make races -- which air on ESPN starting June 20th -- even more thrilling, luring more fans (and, by association, lucre) to the game.

Most hobby pilots will tell you that half of the fun is building your own quadcopter and improving it over time. In DRL races, there's one standardized drone. "We want DRL to be the ultimate competition of piloting skill," the DRL's CEO, Nicholas Horbaczewski, told Engadget. But there are other benefits to a level technical playing field. "It allows us to do things that we couldn't with homebuilt rigs -- that's everything from the way we cover the drone in bright, color-differentiating LEDs to tell them apart, to some of the engineering innovations that we can bring into it."

The innovations Horbaczewski is referring to include doubling the thrust to 16 pounds in the Racer 3, which makes it much more agile than its predecessor, allowing for tighter turns and more demanding, three-dimensional race courses. There are also more practical elements, like a polycarbonate canopy that makes the Racer3 more rugged.

Sometimes one bad crash is all it takes to end a pilot's race. With the new polycarbonate hood, Horbaczewski says the Racer 3 can take more hits, and pilots can actually get right back up and keep racing, in the same way a Moto GP rider might hop back on his bike after a fall and doggedly cross the finish line. Ryan Gury, the DRL's head of product, adds, "It also makes it a much more sexy and attractive drone," which might help undo the "hobby electronics" vibe that some outsiders associate with the sport.

Aesthetics count, too. The DRL's 2016 season was picked up by ESPN (Sky in the UK), broadcasting the season's races to an audience of nearly 30 million Americans. I asked Horbaczewski if that exposure translated into bigger crowds at the events, but he tells me that that hasn't been the DRL's goal. He argues that ESPN affords them an audience that far exceeds what a full stadium would bring. You need only look at any of the race teasers to see that DRL events were almost designed for TV, with flashy neon lights and a deliberate fight-night glitz.

The only problem for those budding pilots that ESPN has lured in? You won't ever be able to buy the Racer3 -- it's for DRL pilots only. "This is not for sale, this is not a product you can buy," Horbaczewski told Engadget. "We're not a consumer products company. We want to be focused on being the most elite drone circuit in the world." That said, Horbaczewski did say the DRL has partnered with Toy State to make a more mainstream quadcopter, which should be hitting shelves this August. There are plenty of alternatives in the meantime, such as Amimon's Falcore and UVify's Draco, that offer a learning curve for beginners and near race-level performance.

If the DRL, and drone racing in general, want to grow, more user-friendly products are essential. One of the sport's highest-profile pilots goes by the name Ummagawd, and when I asked him about these "ready-to-fly" craft for beginners, he was encouraging about their abilities: "The tech that's going into these ready-to-fly breeds are definitely not something to take lightly. With the right pilot, they would be just as capable as the home-brewed racers." This is reassuring for anyone who's ever searched YouTube for "how to build a race drone." "There's currently still a decent barrier to entry into this sport/hobby, and I believe that's a bottleneck at the moment," admits Ummagawd.

As for my opening question, drone racing doesn't yet have the booming revenue streams that eSports does, but that's changing. Games lend themselves to additional revenue opportunities that drones do not. League of Legends can sell endless digital Championship skins. Drone racers have to rely on contracts and prize money, or maybe put their name on a quadcopter you can buy (such as Ummagawd's popular Vortex 250). But it's getting there. Last year, the outright DRL winner -- a pilot named Jet -- bagged a "six-figure" contract. This year, even armchair pilots can snag $75,000 by winning a digital race in the DRL's PC-based drone simulator game. The money's starting to come in, though -- the DRL has a sponsorship with Allianz, and rival league DR1 has Mountain Dew. But the job title "Pro drone racer" is a very elite club right now.

Perhaps a better parallel for the sport today is skateboarding in the '80s and '90s. The largely underground activity attracts a dedicated following where riches and fame are not realistic goals, meaning that only the hardcore who love it enough persist. Their creativity and enthusiasm spawned an empire. Early skateboarders also earned money primarily through sales of their pro-model boards and competition winnings. Tony Hawk might be a multi-millionaire now, but there was a time when his team manager (and '70s skate legend) Stacy Peralta cut him a royalties check for 85 cents, so heterodox was the sport at the time. Of course, skateboarding is now fully in the mainstream, and eSports is thriving -- no doubt a story arc the DRL is hoping its sport will follow.

In this article: drl, drone, droneracing, droneracingleague, editorial, entertainment, espn, gadgetry, gadgets, gaming, gear, quadcopter, racer3, robots
All products recommended by Engadget are selected by our editorial team, independent of our parent company. Some of our stories include affiliate links. If you buy something through one of these links, we may earn an affiliate commission.