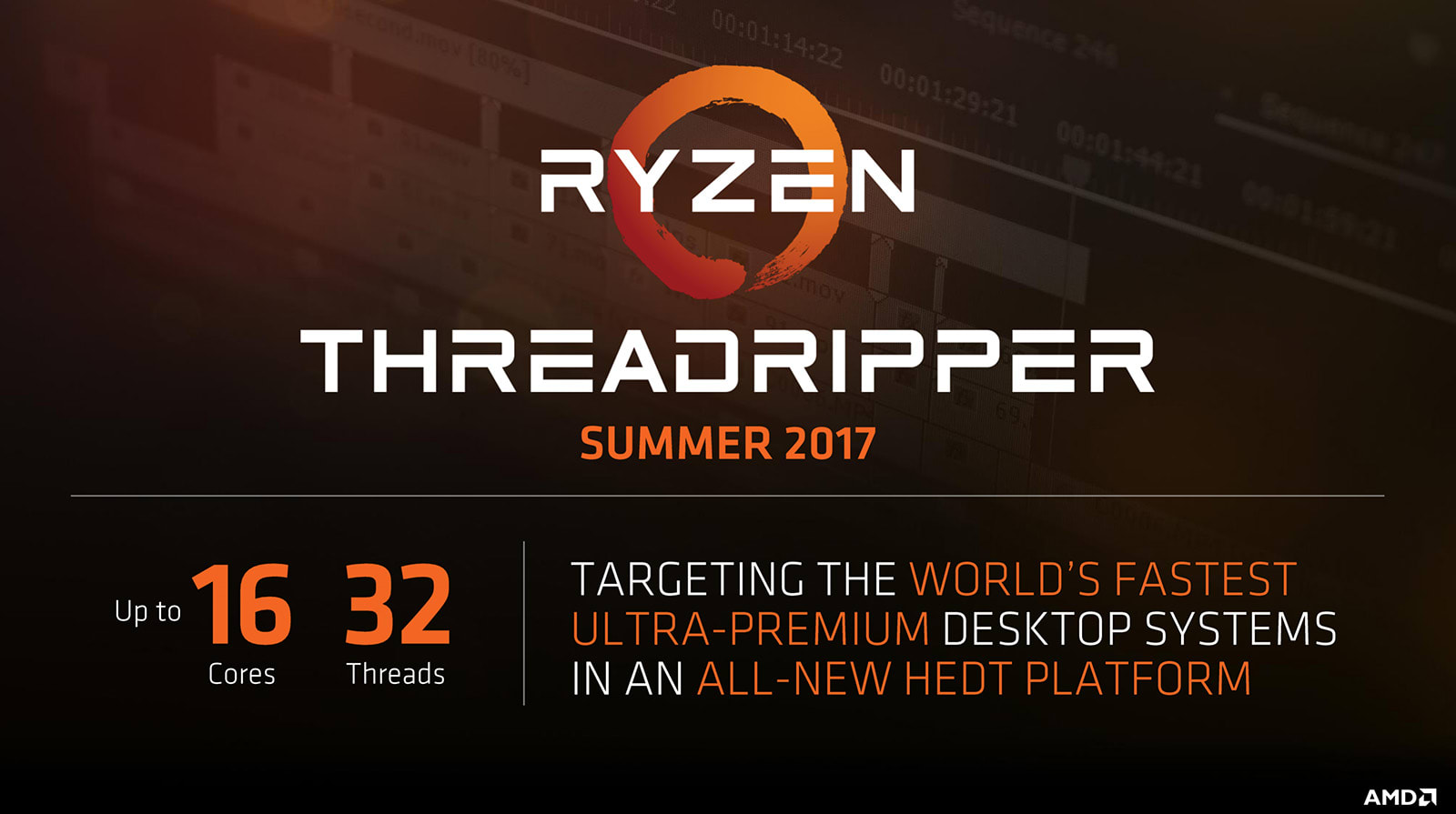 AMD has unveiled Threadripper, a 16-core, 32-thread CPU that will take on Intel in one of its key markets: high-end desktop CPUs. The chip has been rumored for a while now, but AMD finally unveiled it at its analyst day, saying it would arrive by summer of 2017. The company may have wanted to get the launch in ahead of Intel, which will reportedly unveil a long-rumored 12-core Core i9 chip and new X99 HEDT (high-end desktop) platform sometime soon.

AMD didn't reveal any other technical details (other than by a leaked presentation), so it's hard to say which company's new chips will perform best. As with AMD's new Ryzen models versus Intel's high-end Core i7-6900 chips, AMD's model may be better at multi-threaded-friendly tasks like video editing or motion graphics, but short of Intel's models for gaming. Knowing AMD's history, it will likely have better pricing, too -- Intel's current flagship desktop chip, the 10-core i7-6950X Extreme Edition, costs over $1,700, so that won't be hard to beat.

AMD did say that the chip, which uses the current 14-nanometer Zen architecture, is also coming with an all-new HEDT platform with expanded memory and bandwidth. "Ryzen Threadripper is targeted at the absolute ultra high-end of performance in desktop," said AMD Senior VP Jim Anderson. The company will lay out more details and specs for the chip next week at Computex.

As for graphics, AMD will soon ship its first board based on Vega architecture, the follow-on to Polaris, sometime in June. However, the first model, the Radeon Vega Frontier Edition, is more aimed at data scientists and engineers rather than enthusiasts or gamers. However, its next-gen quad-core, 8-thread Ryzen mobile chips -- launching in the second half of 2017 -- will integrate Vega graphics and offer 50 percent better CPU performance, 40 percent better graphics and half the power consumption.

The prospect of high-end AMD chip and graphics is great news for PC enthusiasts. With Intel's one and only rival finally putting up some worthwhile competition, it'll not only give consumers more options but likely drive down chip prices overall. That does depend on how the chips fare against Intel, but we should learn those details soon.

Source: AMD, AMD Product Map (PDF)
In this article: 16-core, 32-thread, amd, applenews, CPU, gear, personal computing, personalcomputing, Ryzen, Threadripper
All products recommended by Engadget are selected by our editorial team, independent of our parent company. Some of our stories include affiliate links. If you buy something through one of these links, we may earn an affiliate commission.