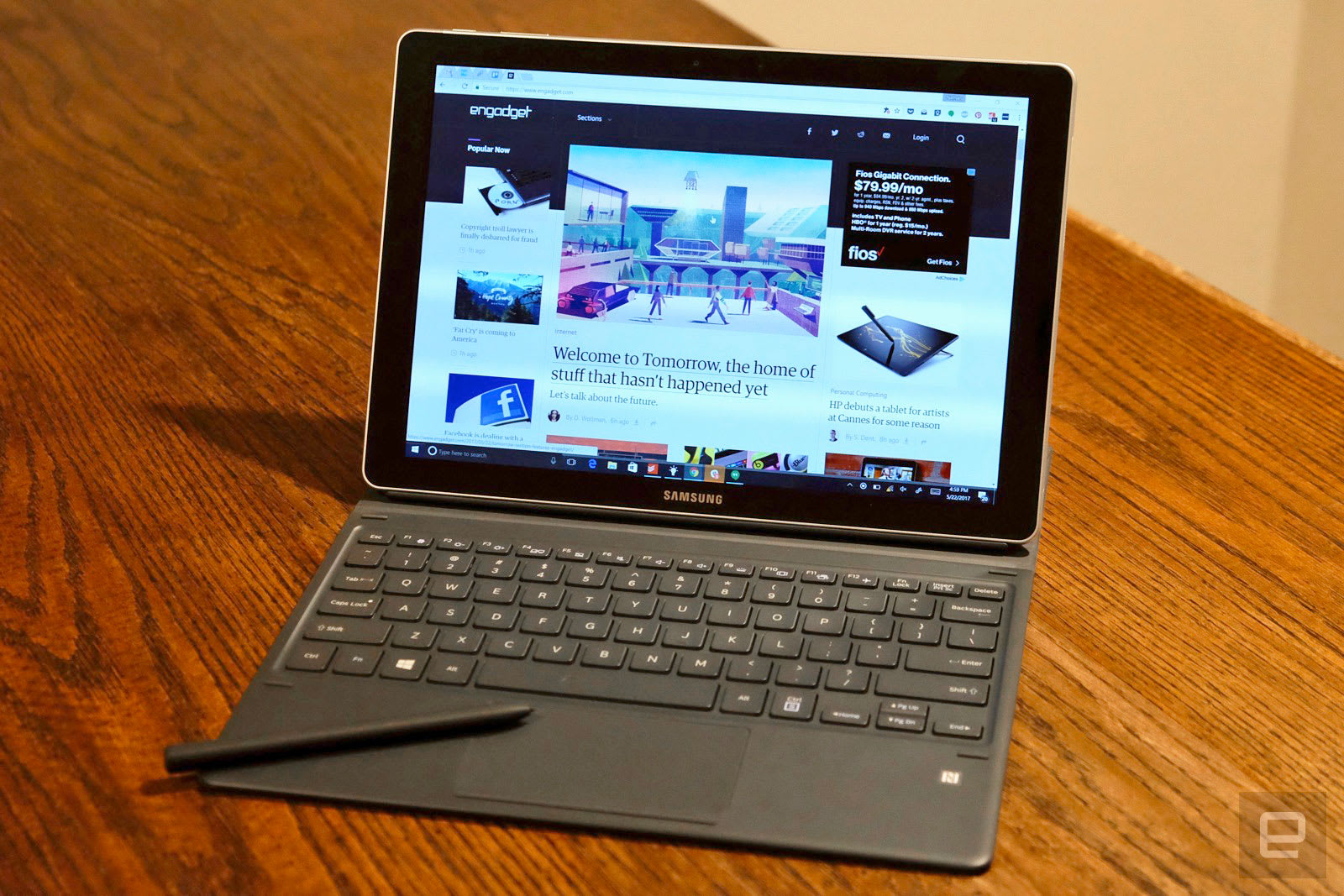 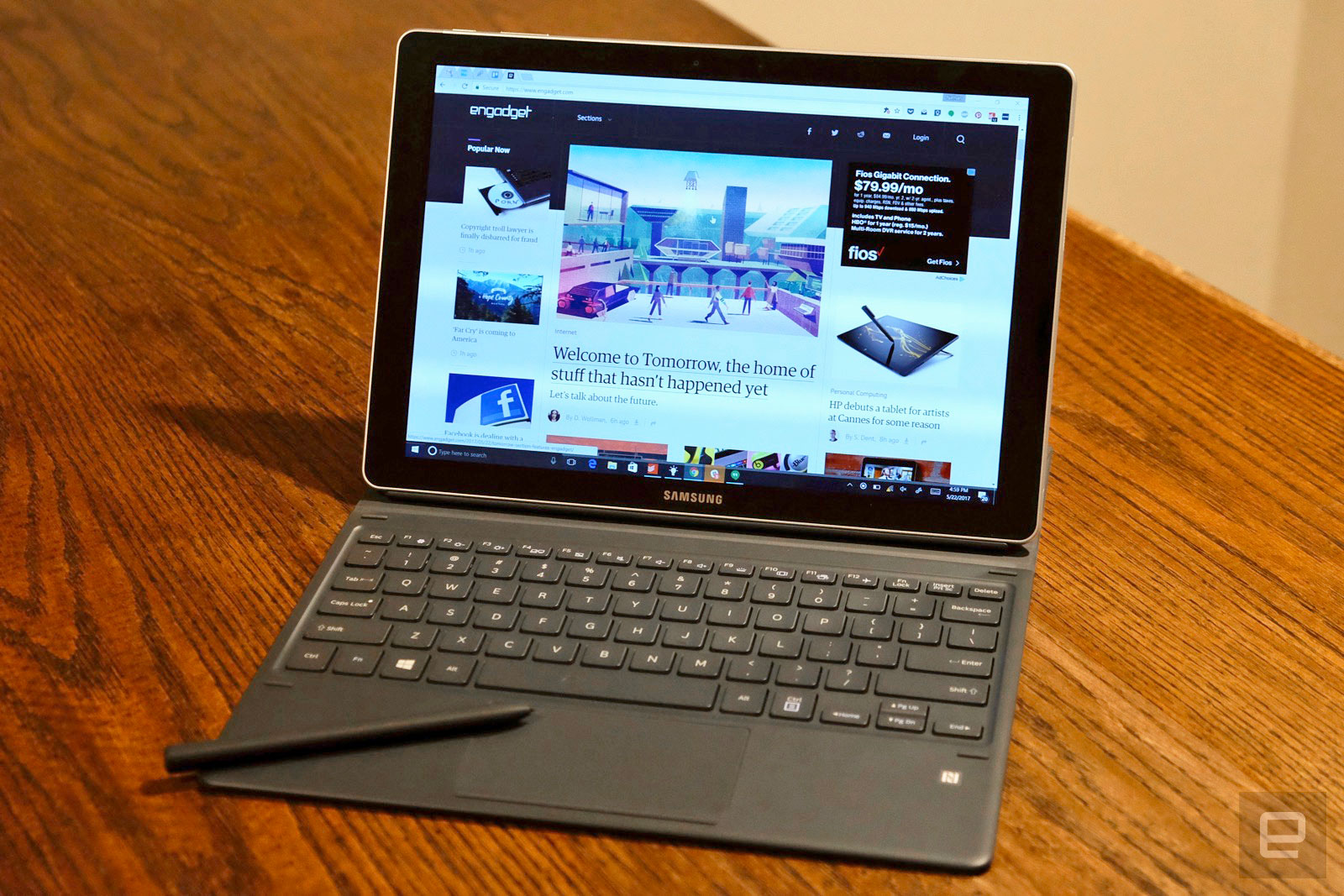 Samsung's Galaxy Book isn't the company's first attempt at taking the Surface Pro head-on: Last year's TabPro S was clearly inspired by Microsoft's convertible. But sluggish performance and a cramped keyboard made the whole experience a bit painful, despite a great screen and battery life.

At first glance, it seems that Samsung has learned from its mistakes -- the new Galaxy Book features a number of improvements. Most notably, the Galaxy Book features a Core i5 processor rather than the weaker Core M in last year's model. The keyboard is larger, too. But the things that we liked about the TabPro S, including its stunning, pressure-sensitive display, appear to still be intact. That said, after a couple days with the Galaxy Book, I'm at once impressed and infuriated with what I've found so far. 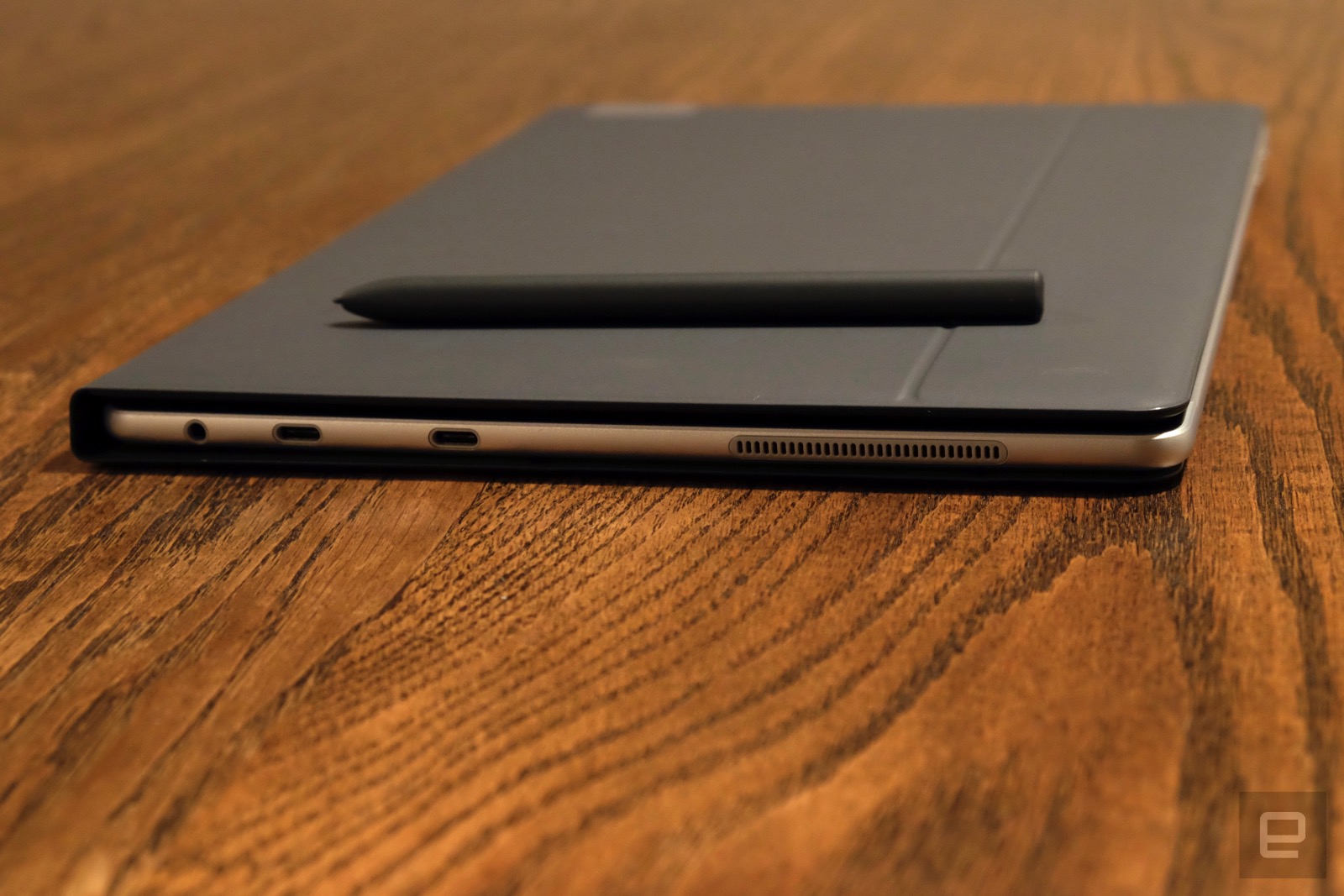 The first thing I noticed about the Galaxy Book was its impressively svelte profile. Sure, it weighs around 1.5 pounds, but that's not bad for a tablet with a 12-inch screen. It's a tiny bit thicker and heavier than the 12.9-inch iPad Pro, but the internals are undoubtedly more powerful. The seventh-generation Core i5 processor runs at 3.1GHz, a chip that can match many laptops on the market. Unfortunately, the Galaxy Book I tested is paired with only 4GB of RAM. That's enough for casual use, but I found that Chrome had to refresh tabs that I navigated away from pretty frequently.

Aside from some tab refreshes, the Galaxy Book has handled my typical daily workflow well. I've been running Slack, Twitter, Todoist, Word, Mail and several Chrome windows (one of which is playing tunes constantly through Google Play Music) without incident. But the powerful processor does have a downside: fans. When I was doing anything more than running just a single browser window, the Galaxy Book's cooling system audibly kicked in. It's not a big deal, and it's par for the course when jamming an i5 into such a slim body, but it was still a bit disappointing. 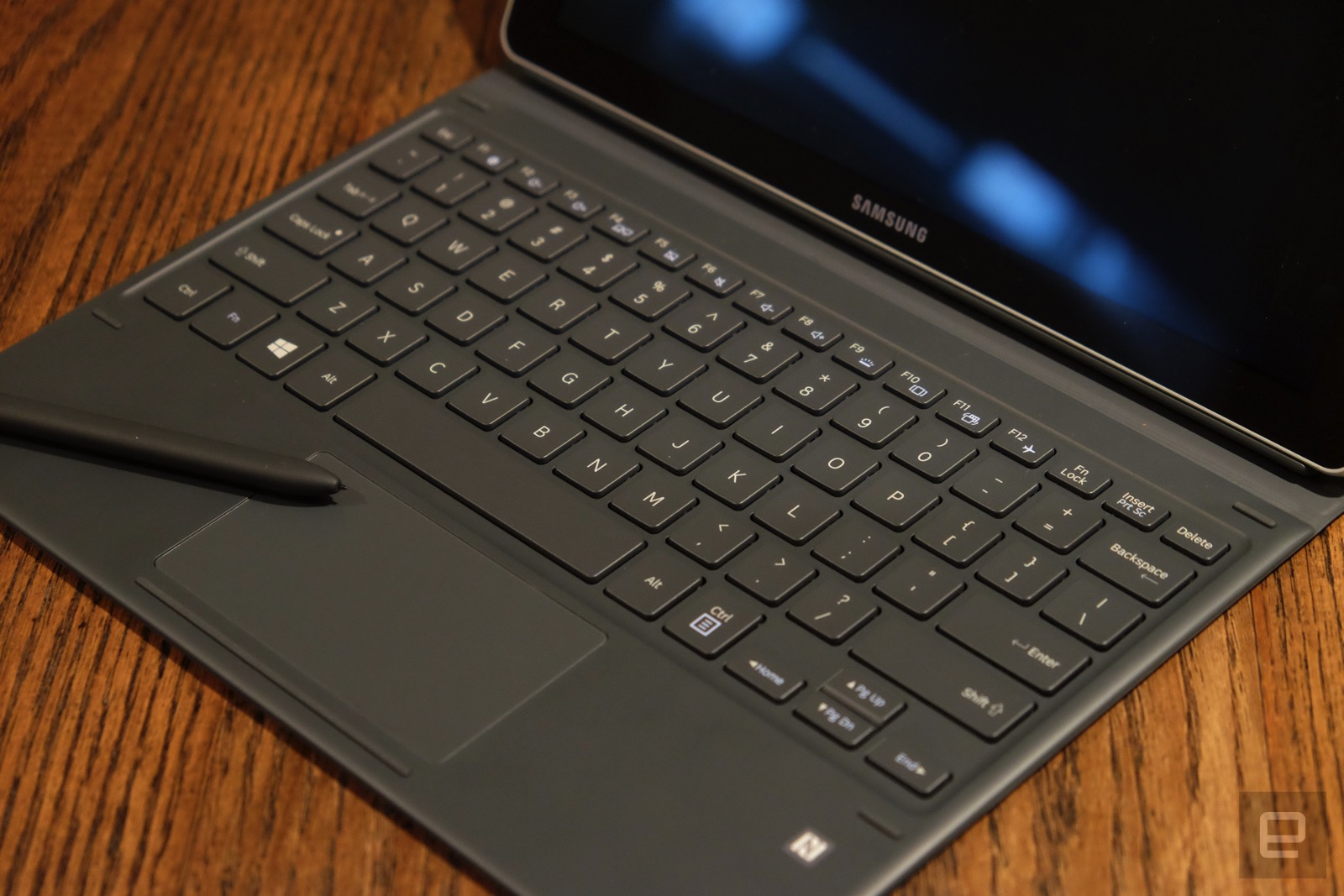 The Galaxy Book's keyboard is still a bit of a mixed bag. The good news is that it's much larger and less cramped than the one included with the TabPro S. When placed on a desk or similar flat surface, typing on the Galaxy Book feels like your average laptop keyboard. It's nothing mind-blowing, but it's totally comfortable and useable. It's also backlit, something I wasn't expecting. Similarly, the trackpad gets the job done: It's not very large, but it's smooth and responsive enough that it didn't cause any problems.

Unfortunately, that all changed when using the Galaxy Book on my lap. As with most convertibles, it just isn't the most comfortable experience. The top-heavy tablet and limited angles of the keyboard stand simply make it unpleasant to use. But, more crucially, the keyboard cover flexes like crazy when the Galaxy Book is perched on your lap. The weight of my palms on the keyboard rest made the whole thing bend a bit. And sometimes, if I applied right weight in the right spot, I could unintentionally make the trackpad "click" with my palms, which led to errant mouse input popping up at random as I typed.

It makes the whole experience feel cheap and imprecise, and it's a bit of a letdown that Samsung didn't use something with a bit less flex. Once I figured out what was happening, I was able to avoid the problem, for the most part, but I still find myself accidentally activating the trackpad at random from time to time.

The tablet itself, however, mostly feels great in-hand. As with most tablets this size and with this display aspect ratio (about 16:10.7), it makes much more sense to use it in landscape mode rather than portrait. But that's fine, as Windows 10 is primarily designed for that orientation as well. The Galaxy Book feels solid and light enough to use as a tablet, though you won't want to hold it up for extended periods of time. That's OK, though, because while Windows 10 works well enough in tablet mode, most apps are still optimized with keyboard and mouse input in mind. 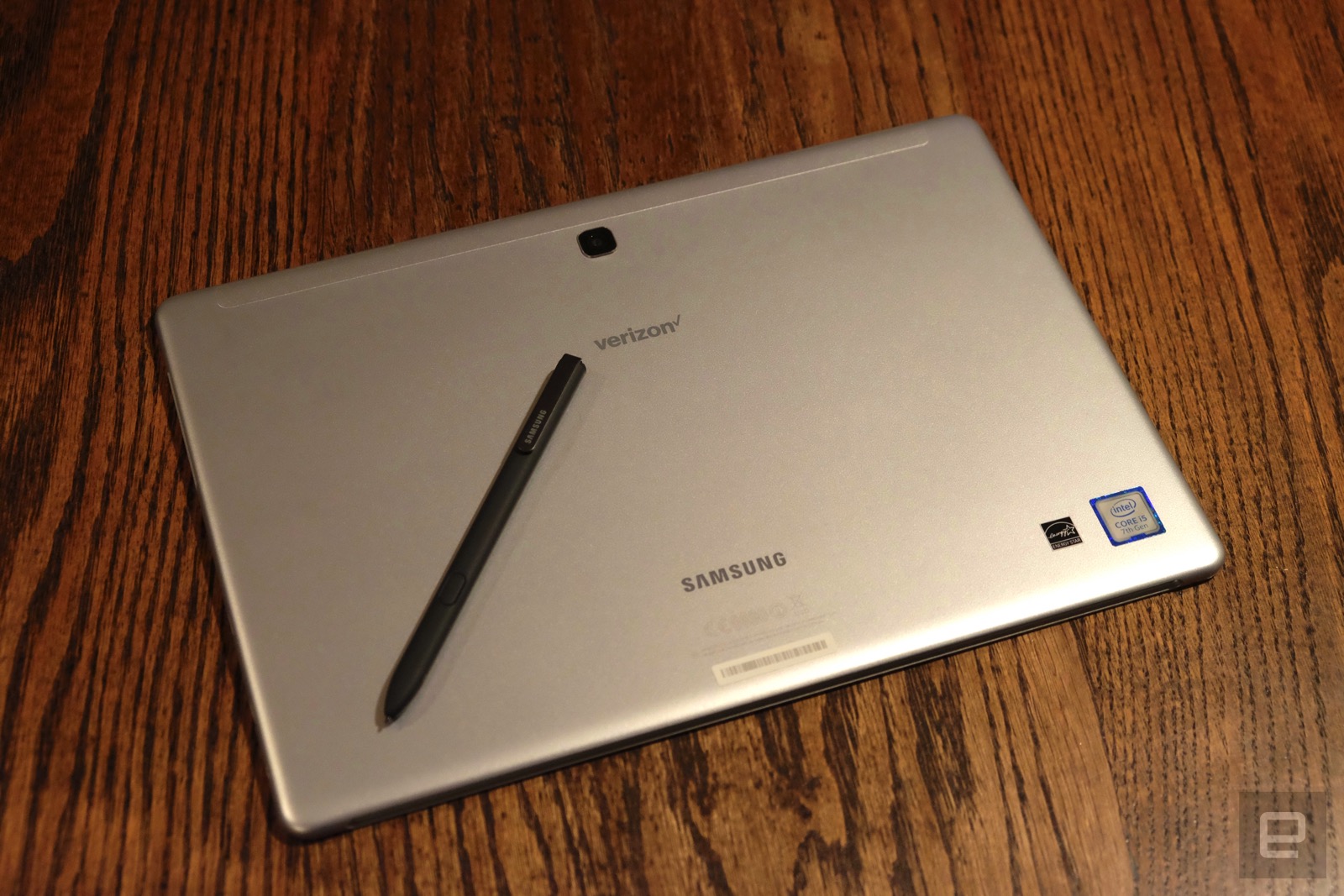 Like most tablets, the port selection here is limited: There are just two USB-C ports and a headphone jack on the right side of this device. On the left, there's a SIM card slot, if you're using the version with a Verizon LTE connection included. While that's a little disappointing for something meant to replace your laptop, it's in line with what you'll get on the Surface Pro 4 (and far more than the iPad Pro offers).

I'm still trying to get a sense of the Galaxy Book's battery life, but my typical usage patterns appear to be doing quite the number on it. I'm going to preface these numbers by noting that I told a Samsung representative about my problems and was told I'd receive another test unit, as mine seemed potentially defective. But the original device went from fully charged to 5 percent after only two hours and 50 minutes. Samsung claims video playback time of "up to 11 hours," but I can't imagine how I'd get that much more battery life when simply watching video.

Overall, the Galaxy Book's battery life appears to be much worse than the TabPro S, which did well in our tests. It's not surprising, given how power-hungry a Core i5 is compared to the Core m3 in the TabPro S. To make matters worse, it took me almost two hours to charge the Galaxy Book up from 5 percent to 25 percent(!). That should go a lot quicker when it's shut down, but it was yet another disappointment. I'll be testing my replacement unit straight away and will update this post with new test results.

The last factor here is price. The Galaxy Book as I tested (128GB storage, 4GB RAM, Core i5 processor and Verizon LTE connectivity) costs a whopping $1,299. That's about as much as a similarly-outfitted iPad Pro (with keyboard and Apple Pencil) and more than many other full-fledged laptops on the market, like Microsoft's just-announced Surface Laptop. And that's not to mention the updated Surface Pro that Microsoft just announced -- that new device will be the obvious competition for the Galaxy Book.

With better battery life, more RAM and a better keyboard, the Galaxy Book could have been worth that cash. But as it is, it's a tough sell over the Surface Pro or many other Windows 10 computers out there. It has a wonderful display, to be sure, but that alone isn't enough. We'll see if more time with the Galaxy Book convinces me it's a worthy contender for the convertible crown -- look for our full review coming soon!

In this article: applenews, convertible, galaxybook, gear, impressions, microsoft, personal computing, personalcomputing, preview, samsung, samsunggalaxybook, verizon
All products recommended by Engadget are selected by our editorial team, independent of our parent company. Some of our stories include affiliate links. If you buy something through one of these links, we may earn an affiliate commission.