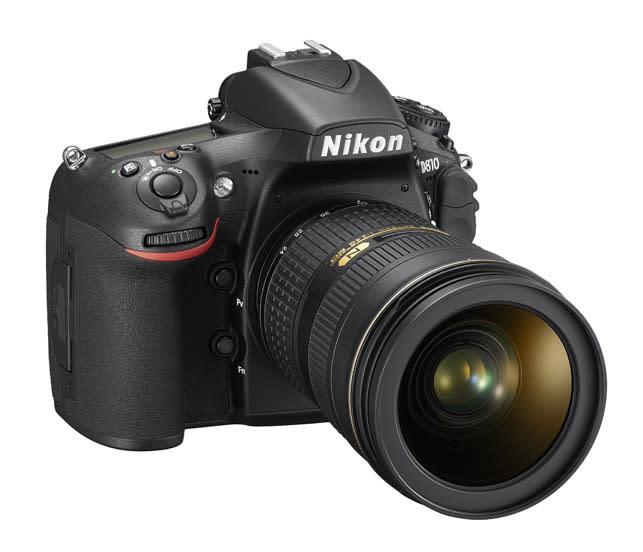 Nikon has become a bit set in its ways, failing to compete with Sony, Fujifilm and others in the profitable mirrorless and high-end compact realm. For its 100th anniversary, the camera maker has no intention of ceding the high-end professional market, however: It just announced the development of the full-frame (FX) D850, the successor to the 36.3-megapixel, full-frame D810 (above).

Nikon didn't say much about it, other than the camera will be a "full-frame, high-resolution, high speed" model. It does promise that the DSLR will be "engineered with a range of new technologies, features and performance enhancements that are a direct result of feedback from users over the years." It also calls it a "formidable tool" for pro photographers, hobbyists, landscape as well as commercial sports shooters, fashion and wedding photographers and multimedia content creators.

For the D810 successor, most pros and serious hobbyist want a new focus system, better RAW images, controls that match the D5, in-body stabilization, built-in WiFi, a tilting touchscreen, faster max shutter speeds and 4K video. So, if Nikon is listening to buyers as it says, it will hopefully implement most or all of those things.

Nikon released a 4K teaser YouTube video (above) with a mix of live video and time lapse. It was shot with the D850, meaning that the new model could have Ultra HD video, very low light capability and 8K time-lapse for star-shooting.

For its 100th anniversary, Nikon President Kazuo Ushida also unveiled a new company philosophy and strategy. "The difference from our past strategies is that we will offer not only products, but also ideas and solutions as well," he wrote. "Nikon will be reborn as a solution company providing superior technologies and ideas, holding 'light' as our core philosophy."

As part of that philosophy, it promises to bring "a wide range of interests to cultivate fresh ideas," and to "warmly embrace diverse ideas." That might sound a bit fluffy, but it it does seem like a break from Nikon's stodgy, unyielding ways.

While it's still doing fine in the high-end DSLR market, Nikon's strategy up until now has led to the disastrous cancellation of its compact DL Series, and no mirrorless cameras behind the foundering Nikon 1 lineup. That led to "extraordinary losses" and the announcement of a major restructuring in February this year. Hopefully the company has realized that 100 years of tradition is nice, but it now has to move into the future, and fast, or it'll lose out to more nimble rivals.

Source: Nikon
In this article: cameras, D850, DSLR, Full-frame, FX, gear, Next-generation, nikon
All products recommended by Engadget are selected by our editorial team, independent of our parent company. Some of our stories include affiliate links. If you buy something through one of these links, we may earn an affiliate commission.